I never meant to deceive him: Love and betrayal in the virtual world

I was a gay man playing "Warcraft" as a beautiful woman, and he was a Mormon virgin. Our romance was a time bomb 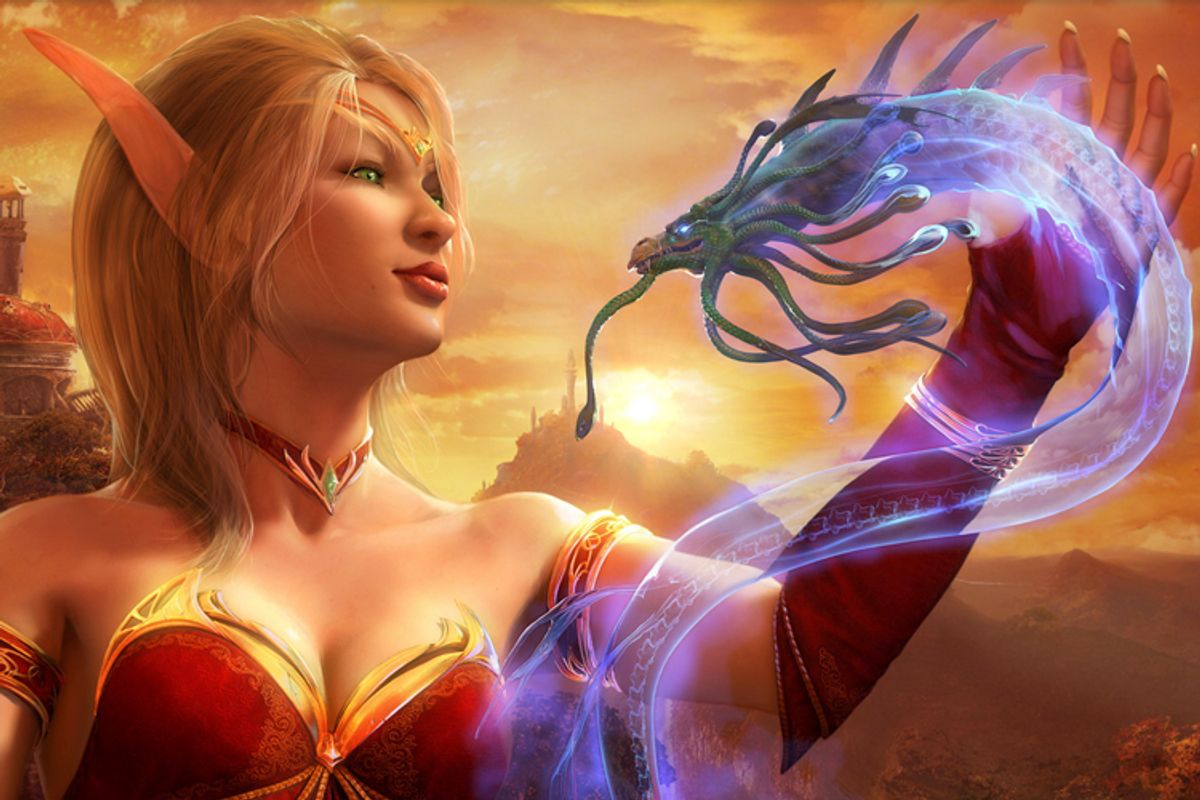 The loneliest place I ever lived was the suburbs of Detroit.

I was 23 years old and stuck alone in the middle of nowhere with nothing to do. As a graduate student working independently on my own projects, all my time was unstructured. My program was too small to provide me a social life, and even worse, I was one of two homosexuals in the entire school. I tried to befriend locals but didn’t fit in. I was lonely and bored.

So I created for myself the illusion of community. I frequently did schoolwork at a coffee shop, because being near other people — even if they didn’t talk to me — felt social. Realizing that months had passed since anyone had touched me, I purchased a massage. The reality was nothing like the hugs I missed, though. The masseur’s touch was painful, and his need for constant validation that the process was “helping” compounded my discomfort.

Eventually, I turned to video games.

In college, Blizzard’s "Diablo II" had been my favorite. In my dormitory’s science and technology wing, achievement in the game had determined social status. Blizzard released "World of Warcraft" ("WoW") just as I was graduating. It popularized a new genre — Massive Multiplayer Online Role-Playing Games (MMORPG) — that featured vastly greater social interaction among players. I sorely needed social interaction, so I decided to try it out.

In "WoW," I discovered a community of people with lives like mine. Although there were numerous 12-year-old boys who called everyone else “faggots,” most of the players were adults in boring places. Just like me. Disabled army vets confined to their homes. Middle-aged parents in small-town Wyoming. Unemployed Mormon twenty-somethings in Idaho.

For us losers, "WoW" was more than merely a pastime. It turned a predominantly unproductive existence into a righteous crusade. Together, we flew around the world(s), vanquished evil from faraway dungeons and recovered dazzling treasure. A new goal was accomplished every couple of hours, and each was a step on the long road to glory.

All the while, we chatted. I heard about the vet’s kidney problems and several couples’ children (who it seemed, judging by the amount of time I spent talking to their parents, received little attention). Seldom did anyone sign off to go to work, but players often took breaks to go to Arby’s.

It’s important to divulge that I was arguably socializing under false pretenses. But that was natural. Each player was represented by an avatar — an animated stand-in — which almost always looked radically different from him or her. It was a chance to try on a vision of self more fit and more fierce than the one in the mirror.

I played for the “Alliance,” which meant that my compatriots were night elves (blue skin), gnomes (teeny tiny), dwarves (short and stout) and worgens (werewolves). I was different from these humanoids, though. I was human.

Clearly, my humanity wasn’t a false pretense. In this respect, I was more honest than most. My lie was more subtle. In real life, I was a fat and balding man, but my avatar was a beautiful, slender woman.

I never intended this distinction to be misleading. Some played out their fantasies as werewolves. Some as gnomes. I wanted to play out my fantasies, too; I wanted to wage war in drag.

Others didn’t see it that way, though. Because my character had the potential to represent truth, they presumed that it did.

Heterosexual men flirted with me, and I never bothered to correct them. In my mind, it wasn’t a lie unless my words actively misled. I was pushing at the boundaries of gender. Or so I told myself.

It didn’t matter until it mattered.

I first met SaltySaber in a dark and dangerous swamp, where he answered my desperate cry for help and rescued me from a gaggle of ruthless ghosts. He slaughtered them effortlessly, with the efficiency and finesse of an experienced warrior. Then, he chivalrously presented me with the spoils.

From that moment on, we were inseparable. We quested together constantly, and he brought his friends along. They were all his church buddies in real life, and together we made a motley crew. Me, a gay secular Jew in Michigan. He and his friends, religious Mormons in Idaho.

He never talked about work; I believe he was unemployed. He hadn’t gone to college, but he dreamed of attending training in Nevada to become a NASCAR driver. “It’s not all that different from a video game,” he’d tell me.

Aside from "WoW," we had only one thing in common. He’d been on a Mormon mission to Brazil, where he’d learned Portuguese. I spoke it too.

We’d converse in Portuguese frequently, but a tension would arise. I’d use masculine adjectives to refer to myself. Instead of the feminine “obrigada” (thank you), I’d say the masculine “obrigado.”

He’d correct me, and I’d be silent. To feminize my language would be to lie. But my silence was a lie of omission.

Soon, my femaleness became central to our relationship, and he grew even more thoughtful. He’d send me notes in "WoW’s" mail system saying he was thinking of me. Once, I expressed my desire for a rare dragon pet, and the next day, it appeared in my mailbox. He must have spent hours slaying dragons and waiting for one to relinquish my gift.

We’d position our avatars next to one another so that we appeared to hold hands. We’d lie down together and look at the “stars.” Salty’s avatar was sexy: broad-shouldered and narrow-waisted with long hair, big arms and pale blue skin. In real life, he was more cute than sexy: a kind face with nice features, a compact build, black hair. In the picture he emailed, he was surrounded by male friends; Salty was the shortest of the bunch but the handsomest. I never sent him a picture of myself.

I wasn’t great at "WoW," and I needed his help. He was at a higher level but always happy to redo missions he’d already completed just to aid me in accomplishing my goals.

I appreciated his assistance, but that’s not why I kept him around. I enjoyed his company. He was caring and kind and always happy to “see” me. It made my lonely life brighter to know that someone somewhere desired my company, even if he knew only a prettier, magical version of me.

Our romance was a time bomb. One day, as we rode dragons across the plains, Salty expressed his feelings for me: “We’re not allowed to have sex before marriage, but I have a feeling that if you were here in Idaho, I’d be bad.”

I had a crisis of conscience. Suddenly, what had seemed fun, warm and innocent felt exploitative. I couldn’t carry on my charade any longer.

The closeness he felt to me was real … sort of. I looked forward to fighting side by side every day and to sharing our lives over chat. But his sexual attraction to me was a product of my lying and of his lack of experience. How could he have carnal feelings for someone he’d never seen or met?

Still, it felt cruel. I was taking advantage of his naïveté for my own fulfillment. At some point, he’d find out and feel mortified.

My universe was much more complex: gender, sex and romance weren’t locked together so rigidly. I was gay, but I had previously dated both men and women, monogamously and polyamorously. I tried to keep an open mind. Had I discovered that a male crush of mine was actually female, I might be surprised, but I wouldn’t feel embarrassed. I’d ask myself genuinely whether I had the potential to be attracted to someone so unexpected.

But I knew he wouldn’t see it that way. I suspected my revelation would cause him to question himself and his own sexuality. That process would be constructive, but it wasn’t my place to prescribe it for him.

It had to end. I canceled my account and stopped playing.

I’m sure he sent me mail to which I never replied. I’m sure he wondered where I’d gone. I’m sure I hurt his feelings.

He’d made my days tolerable, and not having him there felt like sleeping without a pillow. After I quit "WoW," days would go by without my speaking (or typing) to anyone. I missed the intimacy we’d had, as guarded and fallacious as it might have been.

I also recognized, though, the limitations of our connection. The idea of him was appealing: a two-dimensional boy who treated me like a lady. I was just as flat to him: a girl with whom he could kill things.

An idea is not a real person, though. We never shared a bathroom. We never talked politics. We never had awkward sex. We never argued. If I grew tired of him, I signed off.

The flatness made it easy and appealing, but it also made it fake. I missed him, and I felt bad. He didn’t deserve to be hurt.

But we’d never really known one another anyway.

Eliot Glenn is a freelance writer and cultural commentator, and an MPA candidate at Harvard’s Kennedy School of Government. Follow him on twitter: @eliotglenn.