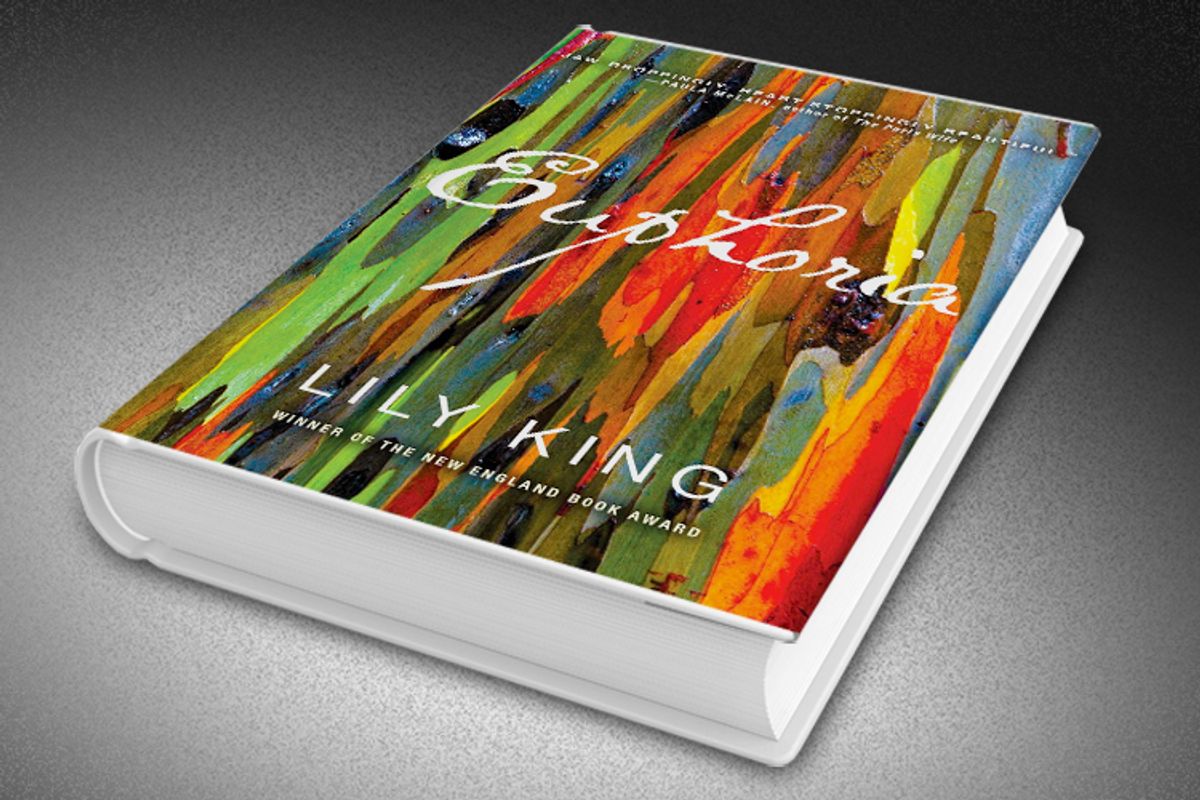 It's the rare novel of ideas that devours its readers' attention. More often, as with Eleanor Catton's "The Luminaries" or "Gravity's Rainbow," we work our way through these books carefully and with frequent pauses, rather than gulping them down in long, thirsty drafts. It's not a literary form known for its great romances, either, although of course love and sex play a role in most fictional characters' lives. Lily King's "Euphoria," a shortish novel based on a period in the life of pioneering anthropologist Margaret Mead, is an exception. At its center is a romantic triangle, and it tells a story that begs to be consumed in one or two luxurious binges.

Late in 1932, Mead and her second husband, the anthropologist Reo Fortune, decided to study a tribe living alongside the Sepik River in New Guinea. Another anthropologist working in the area, Gregory Bateson, joined them for a few months. Cut off from their own culture, the three researchers were cooped up together, a situation that fomented both an explosion of intellectual creativity and a lot of sexual tension. The result was Mead and Bateson's model for a spectrum of cultural temperaments and the breakup of Mead's marriage to Fortune. Bateson would become her third husband.

King has taken these three people and given them new names and fates. Their pasts closely resemble those of the historical figures: Like Mead, King's Nell Stone had a beloved younger sister named Katie who died in infancy. Like King's Andrew Bankson, Gregory Bateson lost one older brother to World War I and the other to suicide. Nell is a protegé of the real-life anthropologist Franz Boaz and a friend of Ruth Benedict, and she also has a former lover named Helen who writes a formative theoretical book while Nell is living in the jungle with Fen and Bankson. Benedict, with whom Mead once had an affair, wrote "Patterns of Culture" in the early 1930s.

You don't need to know all of this while reading "Euphoria," but it does help to understand that, together, Mead and Bateson helped to boost their discipline out of the 19th century and into the 20th. Previously, blinkered by Victorian hubris and prejudice, scholars had believed, as Andrew puts it, "that the natural and inevitable culmination of every society is the Western model," and, somewhat paradoxically, that cultures are determined by such "biological" factors as race. What Nell, Fen and Andrew find along the Sepik is a panoply of tribes with a wide range of behaviors and values, and the anthropologists' struggle to see these peoples clearly is mirrored by their efforts to understand themselves. It is partly their willingness to recognize the parallel that draws Nell and Andrew together.

King is a sinewy, disciplined writer who wisely avoids the temptation to evoke the overwhelming physicality of the jungle (the heat, the steam, the bugs) by generating correspondingly lush thickets of language. Her story -- told by Andrew in a mix of first-person chapters, excerpts from Nell's notebooks and the occasional third-person passage from Nell's point of view as Andrew imagines it -- sticks close to the interlocking bonds that give the novel its tensile power. Nell has written a bestselling work of anthropology that has made her a household name back home and the breadwinner in her marriage. Fen has proceeded to punish her for this in many small ways and some not-so-small ones. Andrew, so abysmally lonely that he attempted suicide shortly before meeting the couple, longs for their company and tries to ignore his attraction to Nell, a heady blend of the erotic and the cerebral. The two of them, as Nell sees it, are both a little bit in love with him.

"Euphoria" -- titled for what Nell describes as "that moment two months in, when you think you've finally got a handle on the place," inevitably "followed by the complete despair of ever understanding anything" -- is about love and whether it can be liberated from the desire to possess. Nell (like Mead) hopes and believes it can, a utopian inclination that finds its way into her work. Mead's own work would be criticized by those who believed she allowed her dream of a more sexually free society to distort her perception of life in, among other places, Samoa.

That's a double-edged sword, however, and in Fen, King presents the macho school of anthropology. He's infatuated with warrior societies and contemptuous of a gentle tribe he and Nell once studied: "If they had been dead they would have been less boring." He ignores or dismisses any form of social organization not founded on dominance and force. As husband and wife settle in together to study the Tam, a fictional Sepik River tribe, Fen and Nell have a theoretical advantage: She can witness aspects of Tam culture reserved for women and he can do the same for those restricted to men. But Fen, feeling emasculated by Nell's success (and by mounting evidence that she is the genius in the family), jealously hoards what he learns and, unbeknownst to his wife, harbors even more dangerous plans regarding a sacred object hidden in the region's hills.

Enter Andrew, whose humility in approaching the practice of anthropology is its own kind of genius. Unlike Nell and Fen, he doesn't presume that he can ever fully understand the people he chooses to live among. Nevertheless, his encounter with Nell -- her curiosity about his work and her passionate involvement with her own -- galvanize him. When the three scientists receive a manuscript of Helen's revolutionary book, it makes all three of them feel "we could rip the stars from the sky and write the world anew." They sit down to draw up "the Grid," a formulation that will become famous in the discipline, and for Andrew it is like "her words were pulling it out of me and at the same time my axis was pulling the words out of her. I wasn't sure if I was having my own thoughts or hers." It's hard to think of a better portrayal of the erotics of the mind.

King's version of this story does differ from the real one in some key aspects, but it has a feeling of shapely inevitability all the same. "When only one person is the expert on a particular people, do we learn more about the people or the anthropologist when we read the analysis?" Andrew asks. Other recent novels with similar premises -- Ann Patchett's "State of Wonder" and Hanya Yanagihara's "The People of the Trees" -- have approached this question more directly. With "Euphoria," it seeps up around the edges and through the cracks of the story. For their part, King's characters are caught up in their own reflections and the playing out of a drama as primal as the rituals they have come to New Guinea to observe.