Alongside the fight scene in last night's explosive episode, there was also a less bloody pairing 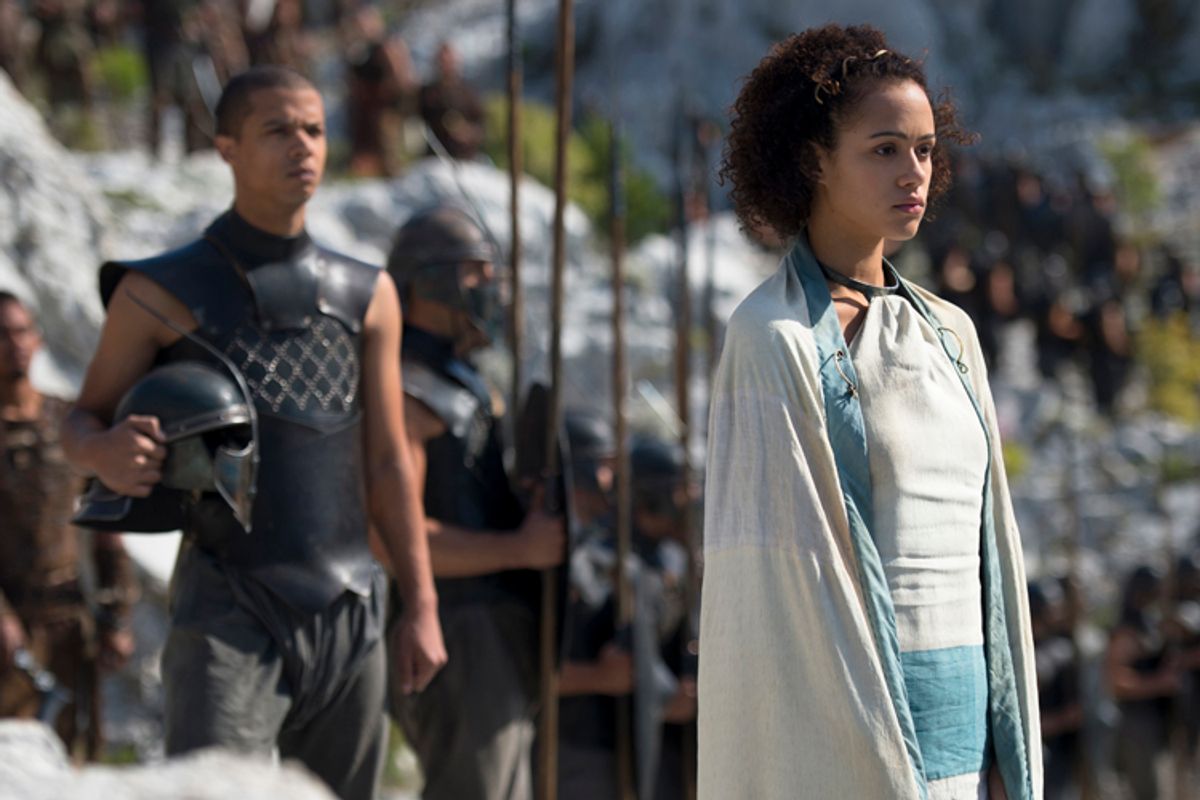 Jacob Anderson and Nathalie Emmanuel in "Game of Thrones" (HBO)
--

Lords cavorting with witches. Brothers bedding sisters. Whore-loving dwarves. "Game of Thrones" has explored every permutation of romance. Why not a chaste one? It strikes a sort of poetic balance that on the same night that "Game of Thrones" fans lost their beloved bi-furious champion Oberyn Martell -- as renowned for his boundless libido as his warrior skills -- we would see a genuine spark of mutual, but as-yet-unfulfilled, longing between the unassuming translator Missandei (Nathalie Emmanuel) and the eunuch Grey Worm (Jacob Anderson). But does the show have the balls to follow through and allow pure love to bloom between these two? Twitter fans hope so.

While it seems a forgone conclusion that the Khaleesi's two most dedicated disciples will inevitably hook up, as far as I am concerned, the uniqueness of their connection ultimately relies on its logistics. At one point in the episode, Daenarys asks Missandei whether or not the "pillars" and "the stones" were removed when Grey Worm was indoctrinated into the Unsullied warrior class. Neither woman knew for certain -- which leaves open the possibility that Grey Worm still bears enough equipment to seal the deal in the traditional sense.

But wouldn't it be more compelling if he could not? "Game of Thrones" is rife with characters who heedlessly consummate in the face of all manner of legitimate objection -- the aforementioned brother and sister pairing leaps readily and consistently to mind. Wouldn't it be special -- even beautiful -- to see a couple confronted with actual, physical limitations, resigned to experience love as primarily emotional and cerebral? (Remember the innocent joy of their recent tutoring sessions?)

Because Missandei and Grey Worm are both brown-skinned former slaves, there is the slight possibility that the gentleman's missing gear represents the irreparable damage done to African-American families over the course of centuries of slavery in the real world. But Jack Hamilton recently wrote on Slate about the show's "unreality, its joyful hostility toward anything like allegory, commentary, or social relevance." Hamilton says "Game of Thrones" is "aggressively false," "doesn't hold a mirror to anything," and, so far, I am inclined to agree.

If, then, Missandei and Grey Worm's coupling is only significant in this imaginary world where love and sex are never mutually exclusive and almost always problematic, leaving their affair somewhat "unsullied" would be -- for the first time in a long time --  a sign of the show actually breaking its own taboos.