My feminist revolution at 40: Why I let my gray show, and why it's a political act

It may seem like a small thing to some, but I consider going au naturel a feminist choice 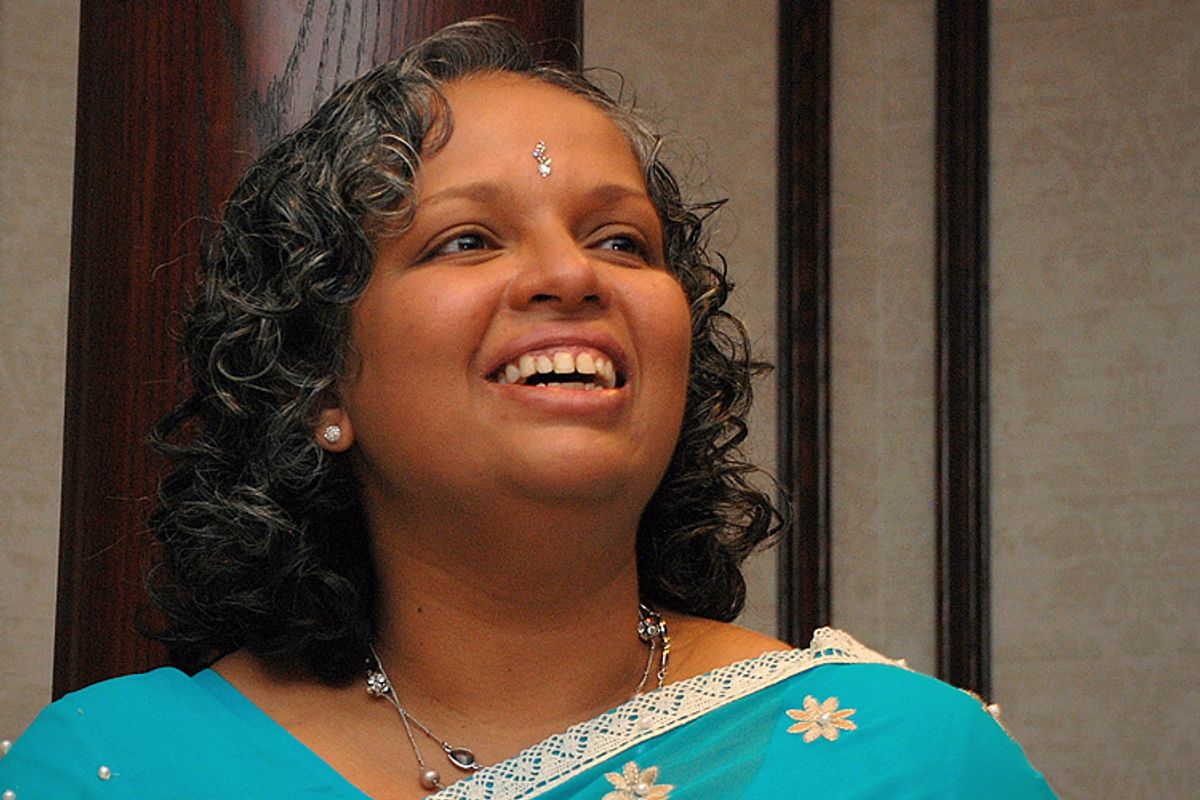 For my mother’s 60th birthday, I went back East, visiting my Sri Lankan family.  I had cut off all my hair, which had once fallen to my waist in a midnight tide; my new short curls were shot through with silver strands. Fiercest at the temples, which were almost solid gray, but also salted through the rest of my pepper black hair.  My aunties proclaimed their dismay -- all of them, with 50 or 60 years to my 40, had jet-black hair.  It was rigorously, religiously colored, and they didn’t understand why I would want to be ugly.

I was 40 when I stopped coloring my hair.  I went to my regular hairstylist and asked her to chop my hair off.  All of it.  I told her I planned to grow it back au naturel.  She wasn’t pleased, but I held firm.  I didn’t try to explain to her how I’d come to believe not coloring my gray was a feminist choice; perhaps I should have.

I’d started going gray young, and had been coloring my hair regularly since I was 25  For 15 years, I went through the monthly ritual:  go to the drugstore and debate the color.  Stick with my dark brown, almost black, or try a little red to brighten it up?  Bring home the $7 bottle of dye.  I’d bend over my bathroom sink, trying not to splatter drops that wouldn’t want to come out of the counter top, floor, wall, ruining more than one towel in the process.

In my 30s, I had a little more money to spare, and began doing quarterly visits to an actual salon, where for $250 and almost three hours, the colorist would give me highlights and lowlights that made my new hair look almost natural -- certainly more so than the uniformly flat bottle dye.  I hated my time there -- I’ve never been the kind of girl who enjoyed the beauty salon. I was awkward at making conversation, but more, I had a hundred, no, a thousand other things I’d rather be doing that sitting in that chair, having caustic chemicals applied to my scalp (they only stung a bit), waiting impatiently for them to do their work.  I did like the result -- it was lovely, like something out of a magazine.  But the older I got, the less patience I had for the process.

The money really started to add up too.  I teach college, and sometimes, when we’re discussing gender issues, I’ll ask my students how much money they spend on their hair.  The young men generally spend a few dollars a month on shampoo; most of them cut their own hair.  This is regional and class-based, of course -- I teach at a state school in Chicago.  At a prep school in New York, I might have a higher percentage of young men who follow a more luxurious hair care regime.  But I suspect at either, the ratio would be the same -- the women would spend much, much more than the men. We typically run some numbers in class and find that when you add up extra money women spend on hair and face and clothes and shoes, the men in the class would have the money for a down payment on a house several years earlier than the women.  This is without even considering disparities in pay.

If I spent $7 each month and $250 each quarter on hair color, that would equal $1,000 or so each year.  If I’d done that for the whole 15 years, I’d have spent $15,000 on coloring my hair.  And this is only one line item in the feminine cost calculation, only one aspect of money and time in which women generally spend more than the men around them.  (My sisters spent years straightening their curly hair; I never had the patience.)

In retrospect, I sort of wish I had all of that money and time back.

Or maybe I don't. Maybe I wouldn't change anything. It made me feel young and pretty, coloring the gray out of my hair.  Sometimes, now, when I wake up after a rough night and walk into the bathroom with my hair a cloudy tangle around my head, I am shocked by the woman in the mirror -- a witch, a hag. Old before her time. A shower helps. When my hair is washed, curl-cremed and tamed, I feel better, especially if I’m wearing it down; the gray is less dramatic that way.  If I’m just going to be at home, and I pull it into a ponytail, suddenly it’s shocking again, half-gray, half-black. Halfway to death, it sometimes feels.  And if I go out in the street -- well, I was mistaken for my young children’s grandmother once.  That didn’t feel good.

Mostly, though, people are complimentary about the gray.  They often call it silver.  I’m lucky that my gray is quite silvery, and it glints in the light.  Gray sounds better when you call it silver.  More than once, a 20-something woman has asked, admiringly, if I’d had that "done."  It definitely helps that I have good skin, almost unwrinkled at 42. One woman told me that the silver actually made me look younger, because it was such a shocking contrast with the smoothness of my skin. If I had a wealth of wrinkles would I still be coloring my hair?  If it had come in a dull gray, instead of shining silver? Maybe.

I’ve tried to embrace the silver, to work with it. I now own many more gray clothes than I used to. Gray and brown (to match my skin) has become my new neutral default, and I’ve been experimenting with accent colors. Turquoise, teal and cobalt blue all work surprisingly well. My entire wardrobe has shifted to accommodate my new hair, and some days, I feel as stylish as Stacy London on "What Not to Wear," with her bold silver streak. And even when I don’t feel stylish, there’s a certain peace to feeling that I’m growing older somewhat gracefully.  At 42, I can claim my middle age; I don’t want to be forever chasing a youth that gets further out of reach with every passing day.

I don’t want to pretend that I am completely reconciled, though.  My partner, Kevin, says he doesn’t care about the gray one way or the other, but there are times when I feel I am letting him down by not looking as youthful or "pretty" as I could, when I accompany him to a work event, or go out with his friends.  Of course, I feel the same way about not being as thin as I could be, as thin as his colleagues’ wives.  Mostly, I try to stifle those feelings; if he doesn’t care, why should I?  And yet, sometimes, I do.

In our society, it’s a luxury to be able to go gray. Our culture rewards the appearance of youth, romantically, but also professionally. I have a good job already, and luckily for me, it’s in an arena where looking a bit older may actually help me rather than hurt me.  People like their professors to look old enough to know something worth teaching.  Their doctors too -- as long as you don’t look too old.  Most jobs don’t work that way, and even now, if I were going out on the job market, I would seriously think about coloring my hair back to black again; maybe even straightening it too.

It’s particularly professionally important for women of color to have "good" hair, if they can possibly manage it, where "good" means "as close to young white women’s hair as possible." People may not consciously discriminate against graying, ethnic hair, but cultural assumptions work on a subconscious level.  When you’re interviewing for a job you desperately need, it only makes sense to weigh everything at stake.  Do you value your natural hair enough to risk not getting the job?

We all live in a system that expects women to present a certain way, a system that penalizes those women who don’t comply.  That penalty falls harder on those without privilege – women who go gray get hit harder than men, women of color harder than white women, working-class women harder than middle- or upper-class.  If the lady of leisure chooses to go gray, she has no job to worry about; the professor or doctor likely has more leeway than the secretary or waitress.  As long as we all participate in this system, as long as the base assumption is that women will color their hair to hide the gray, then those who can least afford the time and money will be hardest hit by the penalties for non-compliance.

I’m not going to argue that going gray is going to save the world.  But I do think, for me, it’s a feminist choice. With every woman who lets her gray show, the pressure on the women around her lessens. The more friends, neighbors, colleagues and employers there are, sporting their silvery strands, the easier it is for women to actually choose freely, to decide the money and time and effort of coloring their hair is worth it for their own reasons alone, and not because society is pushing them to that choice.