Action on climate change is needed, even if it puts the president's party in a political hole 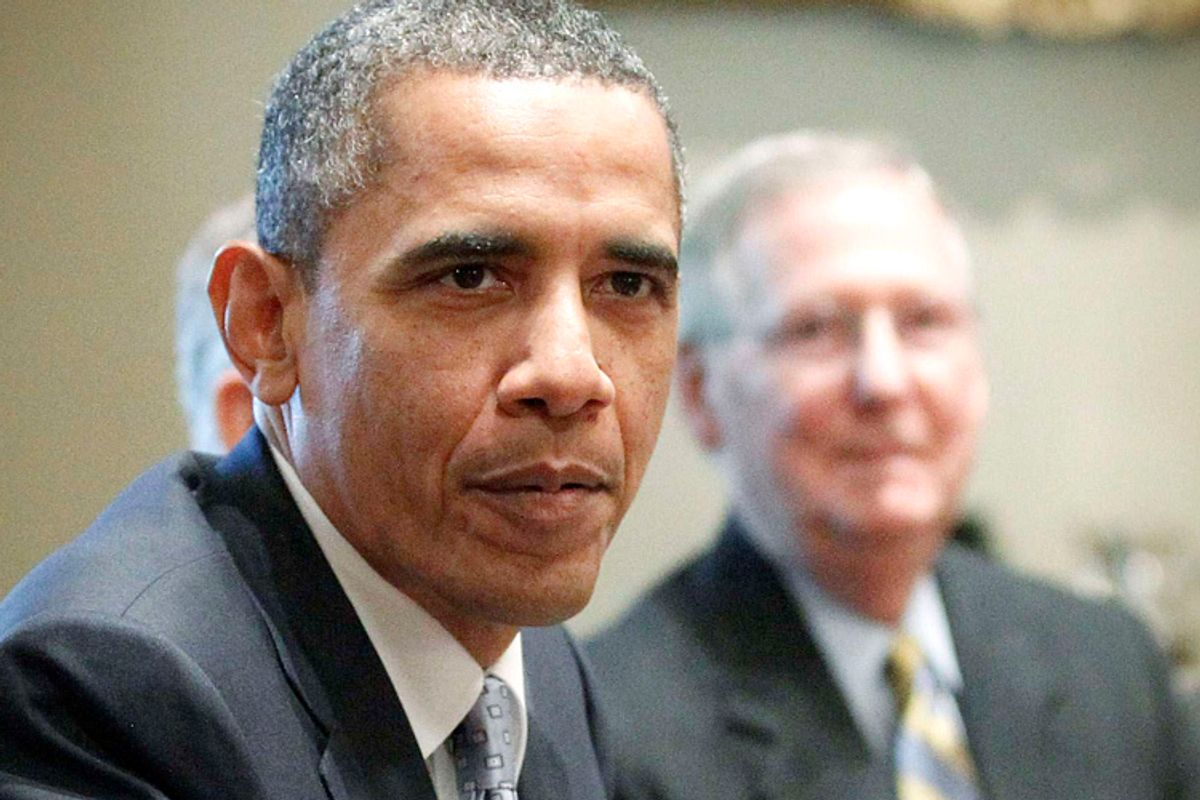 Climate change is and always has been a tough sell. It’s an area in which policy decisions “impose costs today while promising benefits tomorrow,” as Ron Brownstein put it. The benefits he’s talking about are real: Slowing the rate at which we’re thickening the swaddle of carbon dioxide surrounding the earth will mean less death and devastation down the road. But again, it’s the down-the-road part that makes this tricky.

That’s why the new Environmental Protection Agency regulations on carbon emissions from power plants being unveiled today by President Obama are so important. They stand a chance to have a real impact in reducing the effects of man-made climate change, both by reducing our own nation’s carbon output and by setting an example for the world’s other giant carbon gasbags (China and India). They also promise to be a painful political slog for the president and his party.

A quick recap of how we got here. Way back in 2009, the Democrat-controlled House just barely eked out passage of legislation to reduce carbon emissions by 83 percent over the next 40 years. It went over to the Senate, where Republican opposition and the 60-vote requirement to overcome a filibuster ensured that it never got to Obama’s desk. Republican opposition to climate change being what it is – dogmatic, anti-science and obdurate – the president moved to work around Congress and put together his own Climate Action Plan that consisted of “a wide variety of executive actions.” The new EPA regulations are part of that plan.

The Wall Street Journal got an early look at the new proposed regulations, which will set limits for the total amount of carbon that can be emitted from all the power plants within each state. The idea is to target coal-fired power plants, which are the chief culprits when it comes to carbon emissions from electrical generation. States that rely heavily on coal will, over time, be impelled to switch over to less carbon-intensive forms of energy. The goal is to cut emissions by 30 percent nationally by 2030, using 2005 emissions levels as a baseline. (Environmental groups were hoping for a more aggressive target.)

The upside to such a policy is significant: Slashing emissions by 30 percent is no small amount of carbon. And as Ryan Cooper noted at the Week, this is a chance for the United States to take a real global leadership role on climate change, which would help encourage countries like China and India to sign on to an international framework and reduce their own emissions. If we can get all the big polluters on the same trajectory, then it’s possible that downtown Miami won’t be a coral reef by the turn of the next century. Also: less famine, mass migrations and humanitarian crises. All good things!

But again, that’s playing the long game. The Republicans don’t care about the long game; their posture when it comes to climate change is focused exclusively on short-term political gain. And within that arena they have the opportunity to do some real damage.

The whole point of the EPA regulations is to reduce consumption of electricity generated through carbon-intensive means, like the burning of coal. The way to do that is to make coal-generated electricity more expensive. “It's certainly true that climate change won’t slow or stop if people don’t reduce their reliance on carbon-based fuels,” Jonathan Chait writes. “That won’t happen as long as the price of these fuels is so low relative to the cost of the pollution they create—which is a long-winded way of saying that the price needs to rise.”

Republicans will go all-out on claims that Obama is declaring “war on coal” and acting through executive fiat to increase your energy bills and killing jobs within the coal industry. And as this graphic from the New York Times shows, a number of the states that depend heavily on coal-generated electricity also happen to have hotly contested Senate races this cycle.

Kentucky, North Carolina, Michigan, Iowa, Colorado, Arkansas – each one is a Senate toss-up, or fairly close to being one, and each one has a major investment in coal power. Some of them also have relatively high unemployment rates. Kentucky (7.7 percent), Michigan (7.4 percent) and Arkansas (6.6 percent) are all above the national unemployment rate of 6.3 percent. Recent polling from Gallup shows that economic issues are the top concern for voters heading into the midterms, and that Republicans already have the edge over Democrats in voter trust when it comes to the economy. At the same time, voters overwhelmingly trust the Democrats to handle climate change, but they don’t much care about the issue. Throw in an unpopular president and the Republicans’ hand starts looking pretty good.

The question of who prevails will depend on whether voters can be persuaded to look past the immediacy of pocketbook issues and see the larger picture. The Democratic strategy will be to cast the regulations as the party showing it can take on big challenges, while casting the Republicans as heads-in-the-sand obstructionists. And National Journal’s Lucia Graves notes that Ken Cuccinelli’s pro-coal, anti-climate change demagoguery in the 2013 Virginia governor’s race was neutralized by Terry McAuliffe’s strong embrace of environmentalism.

That strategy won’t play in places like Kentucky, where coal is critical to the state economy, and Democratic Senate candidate Alison Lundergan Grimes is campaigning as the “pro-coal Democrat” who will stand up to Obama and the greens.

Regardless of how it shakes out, the damage that inaction on climate change would inflict next century is a far greater concern than the partisan makeup of the legislature next January. And the fact that Obama is making this a priority in spite of the short-term political considerations is as good an indication as any that he considers immediate action on carbon emissions to be critically important. “Obama is not picking this issue to help his party save Senate seats,” Jonathan Chait wrote last month. “He is doing this because, given the enormity of the stakes for centuries to come, there is no morally defensible alternative.”