What "Maleficent" tells us about the future of female movie protagonists 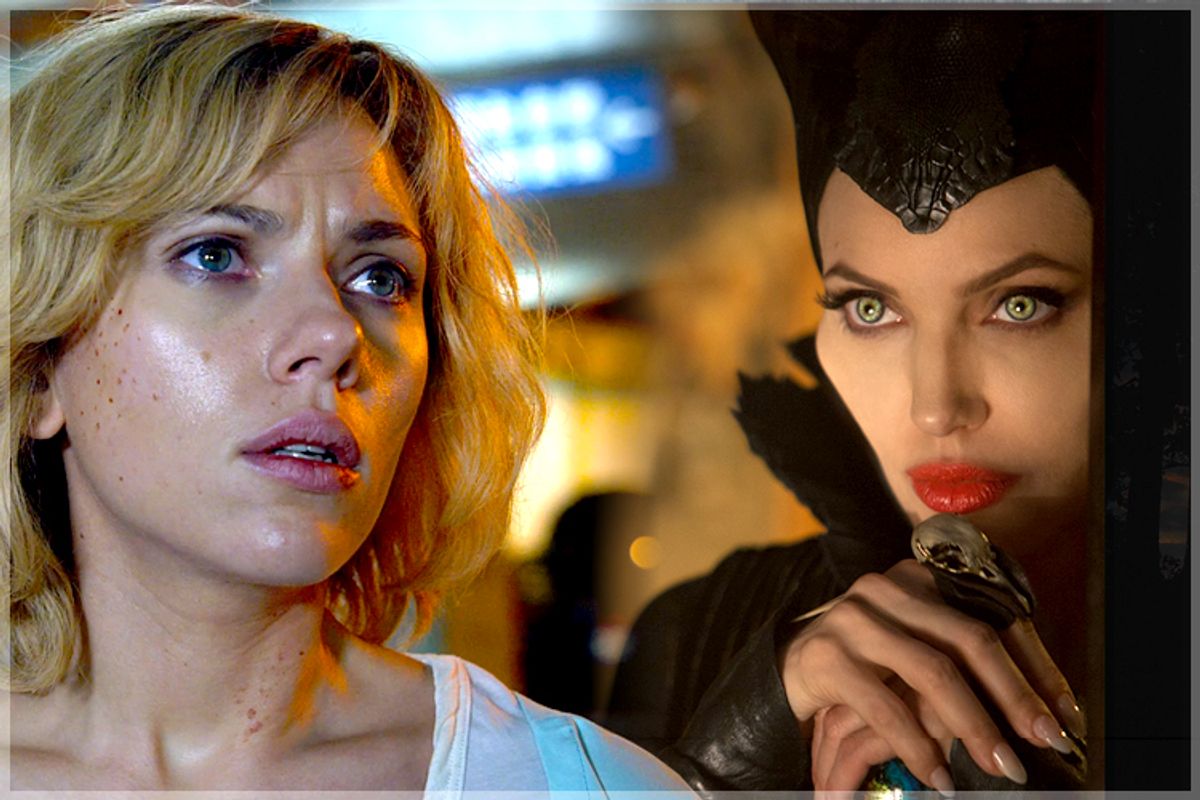 Angelina Jolie's "Maleficent" is by no means a superhero, but the deliciously villainous character possesses enough powers to displace an entire squad of mutants from the top spot at the box office. Though "X-Men: Days of Future Past" was already in its second week of release, the feat is still quite remarkable because of the many identifiable faces, from Hugh Jackman to Ian McKellen to Jennifer Lawrence -- and their corresponding quadrants -- to which the X-sequel appealed. In contrast, check the promotional material for "Maleficent" and you will see only one prominent visage. Taking it further, I challenge anyone who has not already seen the film to name two other actors featured. Angelina Jolie is one of the very few Hollywood leading ladies who has the sheer recognizability and widespread appeal to singlehandedly open a motion picture up to the chance of blockbuster success. She literally has face value. Studios are willing to bank on it, and if you want proof, recall the poster for "Salt."

So, what does this mean for the handful of other women who breathe the same rarefied air as Jolie? It's too soon to tell, but not for long. I haven't seen "Maleficent" yet myself, but I'm betting that all weekend long, while the Disney adventure was raking in its $70 million, it was preceded in each multiplex by a preview for Scarlett Johansson's upcoming sci-fi action vehicle "Lucy." Without even a franchise or a fairy tale to build from, the potential success of "Lucy" hinges entirely on whether  audiences around the world want to see a psychically enhanced Johansson -- and Johansson alone -- kick butt in the near future. Though Scar-Jo may appeal to a slightly younger demographic than Jolie, the folks behind "Lucy" can't help but feel bolstered by the fact that, this weekend, more than just teenage girls paid good money to see a beautiful, badass heroine manifesting unimaginable, superhuman powers. "Lucy," itself, will also function as a test for Johansson's next high-profile action project, a feature film vehicle for Marvel's Black Widow. That catsuited character made a splash alongside the Avengers, but solo is another story.

Recognizability alone is no guarantee that anyone -- man or woman -- can singlehandedly raise a potential tentpole. Remember how Charlize Theron's "Aeon Flux" eviscerated the third coolest character MTV ever generated? And mentioning Halle Berry's name in any conversation about failed franchise attempts is simply beating a dead cat at this point. Zoe Saldana's relatively less expensive "Colombiana" failed to get too far off the ground as well. But that doesn't mean Saldana isn't willing to go it again. Since 2011, the "Star Trek" starlet has had a project on the books titled "Dominion," in which she is set to play a half-angel with a full set of wings -- two more than "Maleficent" herself. I'm guessing that project may yet have a chance to take flight. And there are apparently three "Avatar" sequels in the works. With male costar Sam Worthington's off-Pandora heat waning and Saldana about to get a tremendous bump from Marvel's "Guardians of the Galaxy," we may see a well-deserved change in the order of the billing. Hell, it was her (blue) face on most of the posters, anyway.

While it makes sense that actresses of or near Jolie's commercial caliber have the most to gain from "Maleficent's" ongoing triumph, I wouldn't doubt that lesser knowns are watching with equal anticipation. Case in point, Israeli actress Gal Gadot is all set to play Wonder Woman in a film adaptation of the iconic DC superhero. (Gadot was in the last few "Fast and the Furious" movies -- but then, who wasn't?) By the time "Wonder Woman" comes out, Zack Snyder's upcoming "Batman vs. Superman: Dawn of Justice" will have established her in the role of Diana Prince and significantly raised her profile. Gadot's look is exotic, not unlike Jolie's, and the potential for international appeal exists. Chances are still slim that the Amazonian princess will one day conquer a field most dominated by supercharged men, but they grow a little more likely with each day that a witch sits atop the box office.