Look out, Chris Christie: The new war on public schools just might be defeated

Signs of optimism in public school fight, and warning signs for any politician who pushes privatization, charters 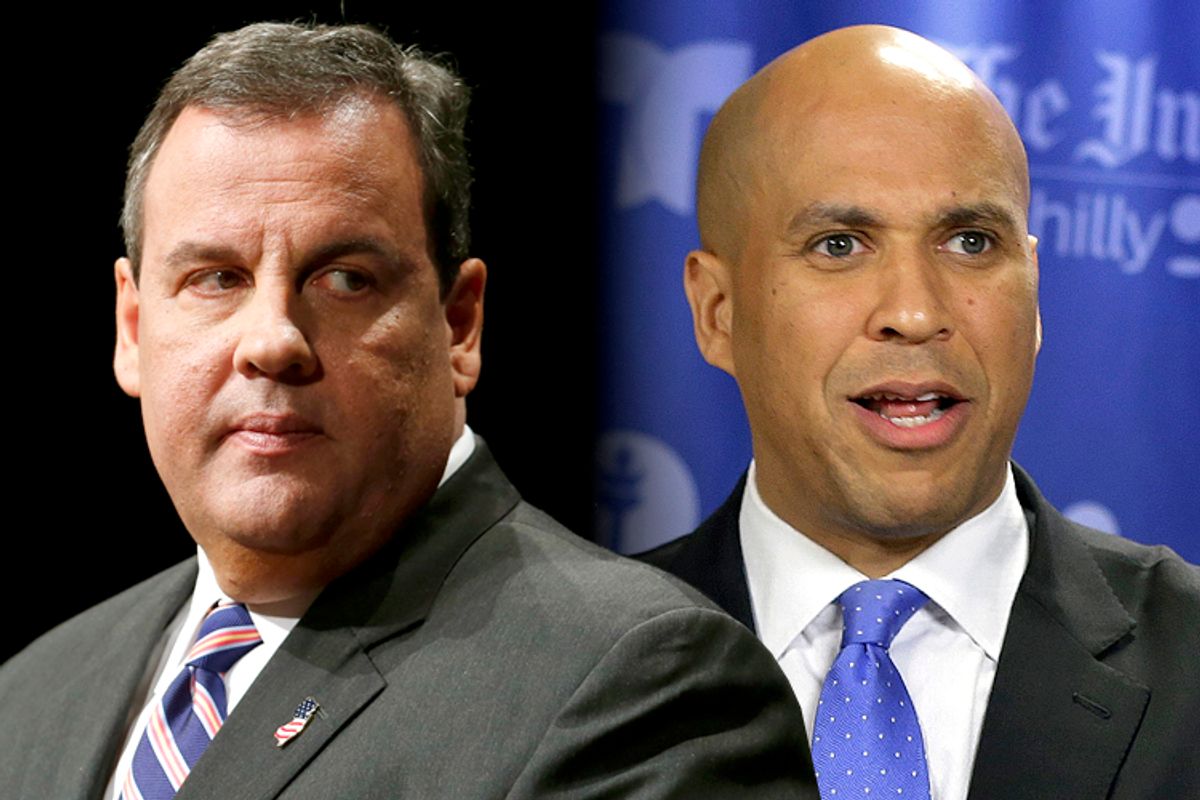 It's no exaggeration at all to say that for many who claim to be part of a "school reform" movement, the goal really is to get rid of traditional public schools.

If that sounds like an unreasonable conclusion to you, cast your eyes toward New Orleans where the last traditional public schools were just closed for good.

Writing for the Washington Post, Lindsay Layton reported the NOLA district closed the remaining neighborhood schools as part of a "grand experiment in urban education for the nation," shifting local control of public schools by voters and their elected representatives to privately operated charter schools.

School governance in the "all-charter district" will now be up "to dozens of independent school operators" unencumbered by the "bureaucracy" of democratic control.

The NOLA model is what the reform crowd has been recommending for the rest of the nation.

In the most recent presidential election, both candidates hailed the New Orleans charter-dominated system as a model for other states to follow. It has been touted by think tanks on the center left and the far right as "what should come next" for "transforming" the nation's schools.

But what's often overlooked in the marketing of the NOLA reform model is that in communities elsewhere – especially those that haven't been decimated recently by a catastrophic hurricane – there's a force that might get in the way of the model's adoption: the people who live there.

The People Have Spoken in Newark

This force reared its magnificent head most recently in Newark, New Jersey, where a state-run school autocracy bent on establishing the NOLA model with impunity ran smack into an election result it had not counted on.

As reported by the New York Times, councilman Ras Baraka's win in the Newark mayor race signals "a likely shift in the direction that New Jersey’s largest city had embarked upon for most of the last decade."

Baraka "tapped into misgivings about the previous mayor," now U.S. Sen. Cory Booker, who had turned Newark’s schools into "a laboratory for the education reform movement."

Local journalist and blogger Bob Braun took that analysis further, writing at his blog, "Baraka’s victory repudiated the policies not just of his rival, Shavar Jeffries, but those of Gov. Chris Christie, former Mayor Cory Booker, and state-appointed superintendent Cami Anderson who is trying to close neighborhood public schools and replace them with privately run charter schools."

The city's schools have been run directly by the state for nearly two decades, and superintendent Anderson "has lost the trust of just about every stakeholder in Newark's schools," reported Jersey blogger Jersey Jazzman. Newark "has its schools run by a superintendent who answers only to Chris Christie, a man the city overwhelmingly rejected in the last election … If that isn't anti-democratic, I don't know what is."

In a phone interview, Analilia Mejia, executive director of New Jersey Working Families Alliance, a grass-roots independent political organization that endorsed Baraka, claimed the campaign "was won at the doors" by the hundreds of volunteers who went door-to-door to discuss the issues with other voters. Regaining some control of local schools was one of those issues. Specifically, Mejia explained, voters were "fired up" by their state governor and the state-supported superintendent "ignoring their voices" in school governance and education policy, and their votes reflected a "desire to bring the control of schools back to parents and citizens of Newark."

Newark voters had good reason to reject the NOLA model for school reform before it was thoroughly imposed throughout their community.

There's no evidence anywhere that the NOLA model of school reform has "improved education." First, any comparisons of academic achievement of current NOLA students to achievement levels before Katrina should be discredited because the student population has been so transformed.

As Louisiana classroom teacher and blogger Mercedes Schneider reported from her site, RSD schools perform poorly on the state's A–F grading system. "RSD has no A schools and very few B schools. In fact, almost the entire RSD – which was already approx 90 percent charters – qualifies as a district of 'failing' schools according to Louisiana Gov. Bobby Jindal’s definition of 'failing' … Ironic how the predominately-charter RSD has the greatest concentration of such 'failing' schools in the entire state of Louisiana."

So if you're a parent in New Orleans, you can apply to send your kid to some of the worst performing schools in a state with one of the lowest achievement levels in America. You're not allowed to choose the best performing schools in the city – those that make up the Orleans Parish School Board – because those are selective enrollment only. You're not going to get priority based on proximity, even if there is a school across the street from your home. You're not going to have any chance of getting your kid into a school where there is high percentage of returning students every year due to the popularity of the school. And you're not guaranteed to get any of the schools on your list.

Further, the NOLA system means that if you don't like your child's school you're less likely to have a way to do something about it, because the charters are often run by private boards and management companies, many of which aren't based in New Orleans or even based in Louisiana.

This is called "choice."

The track record for education reform has not been good for Newark either.

As Own Davis recently reported for the Nation, Newark's charter schools chronically underserve the neediest student population in the district. "About 15 percent of district students have special needs, compared to under 9 percent of those in charters. One in ten district students is an English language learner, compared to less than 1 percent of charter students. All in all, no Newark charter teaches the same share of the neediest pupils as the average district school."

A report from the New Jersey Education Policy Forum recently concluded, "Proposed charter takeovers cannot be justified on the assumption that charters will yield better outcomes with those same children. This is because the charters in question do not currently serve similar children. Rather they serve less needy children and when adjusting school aggregate performance measures for the children they serve, they achieve no better current outcomes on average than the schools they are slated to take over … The assumption that charter takeover can solve the ills of certain district schools is specious at best."

As Davis found out, Facebook founder Mark Zuckerberg’s $100 million donation to the Newark school system never went toward patching holes in buildings that "need a district-estimated $1.3 billion in repairs," or hiring counselors, social workers or nurses for "the fifth-poorest youth population in the country."

Instead, "a full third" of the money for Newark school reform "found the pockets of consultants" and "over 40 percent of the money granted to organizations has left the state."

Seeing their local schools starved of resources and threatened with closure, while millions were siphoned to private companies and charter operators with unproven results, Newark voters responded sensibly and rejected the NOLA reform model despite Wall Street interests who lavished Baraka's opponent with incredible donations and outspent the teachers unions who supported Baraka by 8-to-1.

But what does Baraka's win in Newark mean to the rest of us?

Calling the Baraka victory a "shot across the school reform bow," Valerie Strauss on her blog at the Washington Post wrote, "The election of Baraka … comes amid a number of signs that tells us that it has implications beyond the city’s borders."

Strauss noted, "Bill de Blasio campaigned for New York mayor last year as a friend of traditional public education, and his victory was hailed by those who wanted to slow down corporate school reform, which has led to the growing privatization of public education."

From Connecticut, Wendy Lecker, a columnist for Hearst Connecticut Media Group and senior attorney for the Campaign for Fiscal Equity project at the Education Law Center, writing for the Stamford Advocate, linked the Baraka victory to events in her state in November 2012, "when big money tried to eliminate a democratically elected school board in Bridgeport. Despite the millions poured into that effort from outside agitators, Bridgeport voters flatly rejected the attempt to disenfranchise them."

Noted Lecker, "Voters in the cities most affected by education reform are joining together to speak truth to power … a genuine grassroots movement."

Voter anger over the public's loss of control over public school policy is being felt in Pennsylvania too, where the state's incumbent Gov. Tom Corbett faces an uphill climb in November's election, according to recent polls. Much of Corbett's unpopularity is "directly related to his devastation of primary education," explained Kati Sipp, the executive director of Pennsylvania Working Families, in a phone interview. Voters in school districts controlled by the state's School Reform Commission, such as Philadelphia and Chester, are particularly angry because they have seen that "state control doesn't work," according to Sipp. In districts not under SRC administration, voter anger stems more from "severe state cuts" that have left their programs in "disarray." Statewide, education rivals issues such as jobs and taxes that traditionally bring voters to the polls.

It's no surprise that political operatives from Working Families organizations who are much closer to the ground are sensing the new dynamic of voters wanting to reject the well-financed campaign for New Orleans-style school reform and take back control of their local schools. How many more Democratic candidates campaigning on the wrong side of the issue will take a beating at the polls before the party mainstream gets this?