No, Bernie Sanders should not run for president: Why his challenge is a waste of time

Not only can't Sanders win -- he won't get Hillary Clinton to significantly change her agenda. Here's why 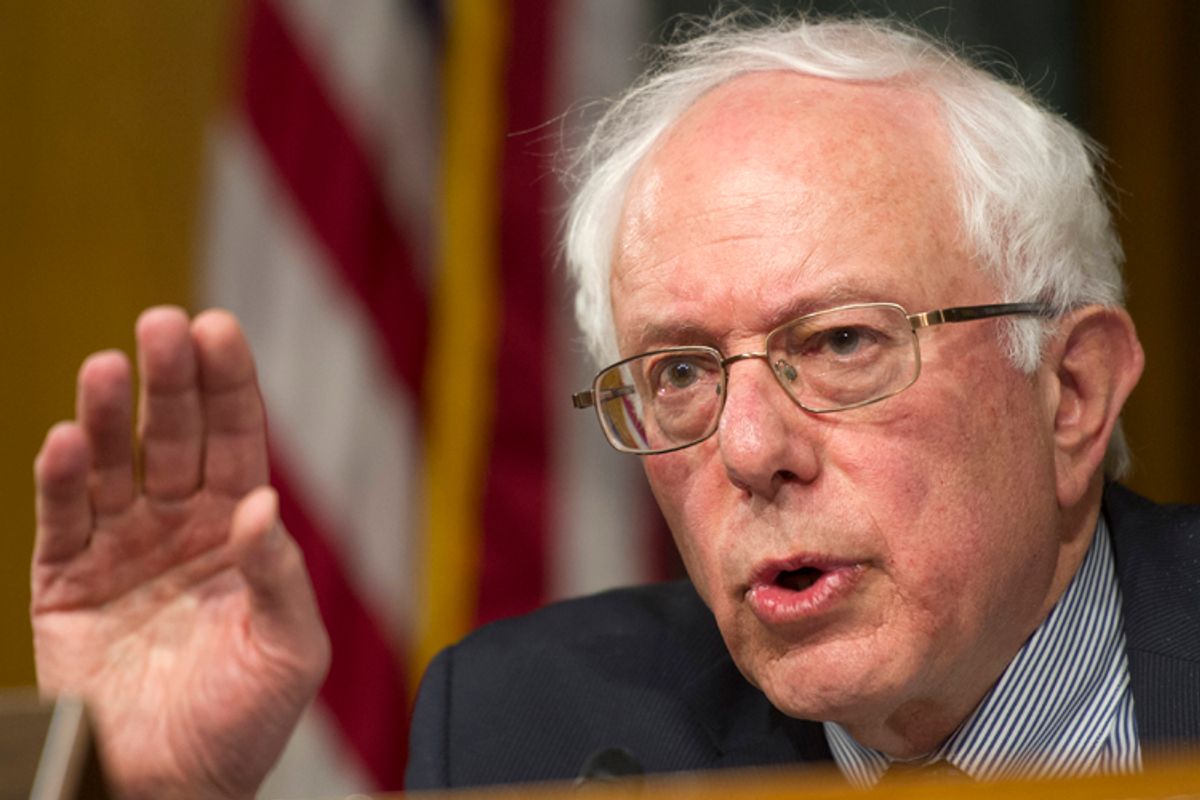 Bernie Sanders is every liberal's favorite radical. Describing himself as “democratic socialist,” Sanders tosses rhetorical Molotovs at America's 21st century robber barons like few other national politicians. But he's also rather non-threatening, his politics reformist, not revolutionary – more old-school liberal than Leninist. His words comfort those on the left desperate for a voice within the electoral system, while his actions – caucusing, campaigning and voting with the Democratic Party – show the liberal mainstream that he is no Ralph Nader.

Now some liberals want the senator from Vermont to drop his nominal status as an “independent” and run for president as a Democrat, not because they really think he can win – let's be real: He can't – but because they hope a run could push presumed nominee Hillary Clinton to work in a few more populist talking points during the general election campaign. In essence, they are asking Sanders to run the left wing of the Hillary campaign – to rile up the base with some class-war rhetoric during the primary, then, after he inevitably loses, to convince disgruntled leftists to get out and vote for the Democrats in November.

“We want him to know that there's enthusiasm for a run, and to run as Democrat,” said Mimi Kennedy, who chairs the board of the Progressive Democrats of America. That group recently presented Sanders with a petition, currently signed by 12,000 people, that urges him to do just that. Sanders understands “the importance of fighting 'inside' the Democratic Party,” the petition says, adding that, “We, the Undersigned, make this call for a primary challenge in full recognition of the need to prevent the current crazed, mean, and dangerous incarnation of the Republican Party from seizing total power.”

In other words: We recognize this guy won't win – we're implicitly acknowledging that in the very petition calling on him to run – so don't worry, loyal Democrats, after we blow off some steam during the primary we will turn out in force for whoever isn't the Republican.

In the Nation, longtime activist and former California state Rep. Tom Hayden writes that, “Bernie Sanders Could Be the 2016 Democratic Candidate We've All Been Waiting For” – not that he expects him to win, either. “If he runs as a Democrat, he will have to find a way to acknowledge Clinton as far better than any Republican candidate,” Hayden wrote, which would be a rather awful and strange tactic for someone who believed they had a serious shot at the nomination; a far better approach, and a more truthful one, would be to campaign on the fact that, from the war in Iraq to the bailout of Wall Street, Clinton has proven that she is not far better than any Republican.

What's to be gained by this timid electioneering? Not much, listening to the advocates. According to Hayden, a Sanders run could lead to more left-wing “platform planks on the economy, climate change and campaign finance reform,” as if anyone outside of a few political nerds is even remotely aware of what's in the Democratic Party's non-binding platform.

Writing in the New Republic – which should itself be a big red flag – Michael Kazin likewise urges Sanders to run for the presidency while acknowledging he “has little chance of winning the Democratic nomination.” The point, then? “[I]f Sanders does run, he could perform a vital political service to Democrats in need of revitalization.” He could get out the vote, in other words, particularly with respect to “the young people who have grown disenchanted with Obama’s achievements.”

Meanwhile, here at Salon, writer Jim Newell argues that Sanders would be “the perfect foil to spar with Hillary Clinton,” though he concedes his actually winning the Democratic nomination is “not likely.” What is possible is that, “At the least, he could play a vital role in setting Clinton's policy agenda before she moves on to the general election,” to which the observer of American politics might very well ask: so what?

If we know anything in the year 2014, it is that what a politician says on the campaign trail has no bearing on what they do in office. Barack Obama campaigned on hope and change and – from mass incarceration to mass deportations to mass poverty to mass murder – has only offered more of the same. There is no reason to suspect, after all these years, Hillary Clinton in the White House will be any better than the Hillary Clinton we have come to know as a hawkish corporate Democrat; if history's any guide, she'll be worse.

As Christine Lagarde, head of the International Monetary Fund, told the Guardian: “I'm very much a believer that it's action that matters much more so than, you know, the flurry of political promises and statements and slogans that are used during political campaigns.” Indeed, “What's really interesting,” she said, “is that wherever you see a change of government ... do you see major changes from the economic and financial policies that were conducted by their predecessors? No.”

There is, then, no point to these calls for a Sanders campaign other than perhaps to assuage the guilt some liberals will feel when, come November 2016, they inevitably vote to restore yet another political dynasty. Whether they close their eyes and think of Bernie when they vote for Hillary is of no practical importance. If anything, a Sanders run for the Democratic nomination would be harmful, only reinforcing the idea that there's room for the left within the national Democratic Party outside of the occasional, always-ineffectual primary campaign.

Running as an independent could have some value, freeing Sanders to be honest: that on so many issues there is not a world of difference between Hillary Clinton and whatever garbage the Republican Party puts on the ballot, and that's a damn shame. But Sanders has time and again said he has no interest in being a “spoiler,” nor in wasting precious time and resources on just trying to get on the ballot in 50 states, which the major two parties have ensured is next to impossible. He could try to run as the nominee of a party that already enjoys ballot access, but in all his years in office, Sanders has never worked to build a genuine third party in Vermont, nor does he seem willing to compromise his independence now, which let's admit, is mostly a narcissistic formality.

Indeed, as former Vermont Gov. Howard Dean once pointed out on "Meet the Press," “He's basically a liberal Democrat” who “votes with the Democrats 98 percent of the time,” which is a big reason why Democrats like him so much. And while he's far and away better than most Democrats, he's been a rather quiet member of the Democratic majority in the Senate. When Barack Obama unveiled a $3.9 trillion budget that increases military spending by 5 percent – counting “Overseas Contingency Operations,” coming in at $635 billion, which is more than what Russian and China combined spend on their armed forces – Sanders had nothing but praise.

“President Obama’s budget provides major investments in rebuilding our crumbling infrastructure, expanding community health centers and improving the lives and educational opportunities of our children,” he said, not even mentioning the single greatest recipient of discretionary spending. Indeed, when it comes to foreign policy, Sanders has been missing in action, refusing to unequivocally condemn the commander in chief he campaigned with in 2006 (the year he also accepted $10,000 from Hillary Clinton's Political Action Committee).

Sanders deserves much credit for opposing the wars in Iraq and Afghanistan – wars that Hillary Clinton enthusiastically supported until, in the case of Iraq, it became politically inconvenient – but he hasn't been much of an antiwar leader. Ignoring the demands of antiwar activists, the socialist senator has reliably voted to fund the wars he criticizes and has backed economic warfare in the form of sanctions against Iran. On Israel, he has proclaimed his support for “Israel's right to defend itself from the constant barrage of rockets Hamas fires into its homes,” never mind that those rockets are usually fired by groups that are not Hamas and do far less damage than the rockets fired from Israel.

And embarrassingly enough, rather than the Senate's only socialist leading the charge against extrajudicial murder, that task has been left to a Republican opportunist from Kentucky, Rand Paul. Indeed, when Sanders was asked by CNN's Wolf Blitzer in 2011 whether he thought Obama had done “the right thing in ordering the killing of an American citizen, Anwar al-Awlaki,” Sanders could only equivocate – and three years later, he voted to make David Barron, the man who authored the legal rationale for that killing, a federal judge.

“Well, the answer is that, I, you know, think that when you have an American citizen killed by the United States government, it raises some real questions,” he told Blitzer. “On the other hand, when you have somebody who's a terrorist and at war with the United States, that's the other side of that equation.” On the one hand: questions. On the other: well, anonymous government officials did say he was a terrorist. When it comes to state-sanctioned murder, Sanders is conspicuously silent, focused more on having the $163 billion over budget F-35 fighter jet stationed in his peace-loving state. Socialists have long critiqued imperialism as a bloody, predictable consequence of capitalism, but you won't hear much about that from the only one in the Senate (you can't spell “democratic socialist” without “Democrat”).

As far as national politics goes, Sanders is probably the best of a bad bunch, but his failure to speak out forcefully on the crimes of the Obama administration abroad, and his timidity with respect to its economic sins at home, severely limits his appeal to anyone who is not a liberal Democrat. And liberal Democrats are never going to vote for someone who isn't a Democrat, having bought into the narrative that Ralph Nader is more to blame for George W. Bush than the Democrats who ran a terrible campaign, decided to put Joe Lieberman on a national ticket and then endorsed most of Bush's agenda – from No Child Left Behind to the war in Iraq – after he stole the election without much of a fight.

It's understandable why liberals would call for Sanders to run: Faced with the prospect of eight years with Hillary, desperation is not unreasonable. But desperation does not make for good strategy. If one wants to effect change, one needs to frighten those in power by organizing people in such a way that their collective power does not dissipate at the end of a campaign that even the run-Bernie-run crowd concede he will never win.

All that time and energy spent on a fruitless foray into presidential politics could be spent on campaigns at the state and local level, where the collective power of the people can still effect change from time to time; it could be spent creating a political organization – not another party – that organizes people for direct actions aimed at thwarting the corporate conquest of our towns and cities. So Bernie, if you're reading this: Don't let honest, well-meaning people waste all that time and energy on a losing campaign for you.