Yes, Maya Angelou was a doctor: A lesson for the ignorant

Deference has never been automatically conferred to black women. The death of a regal light was no different 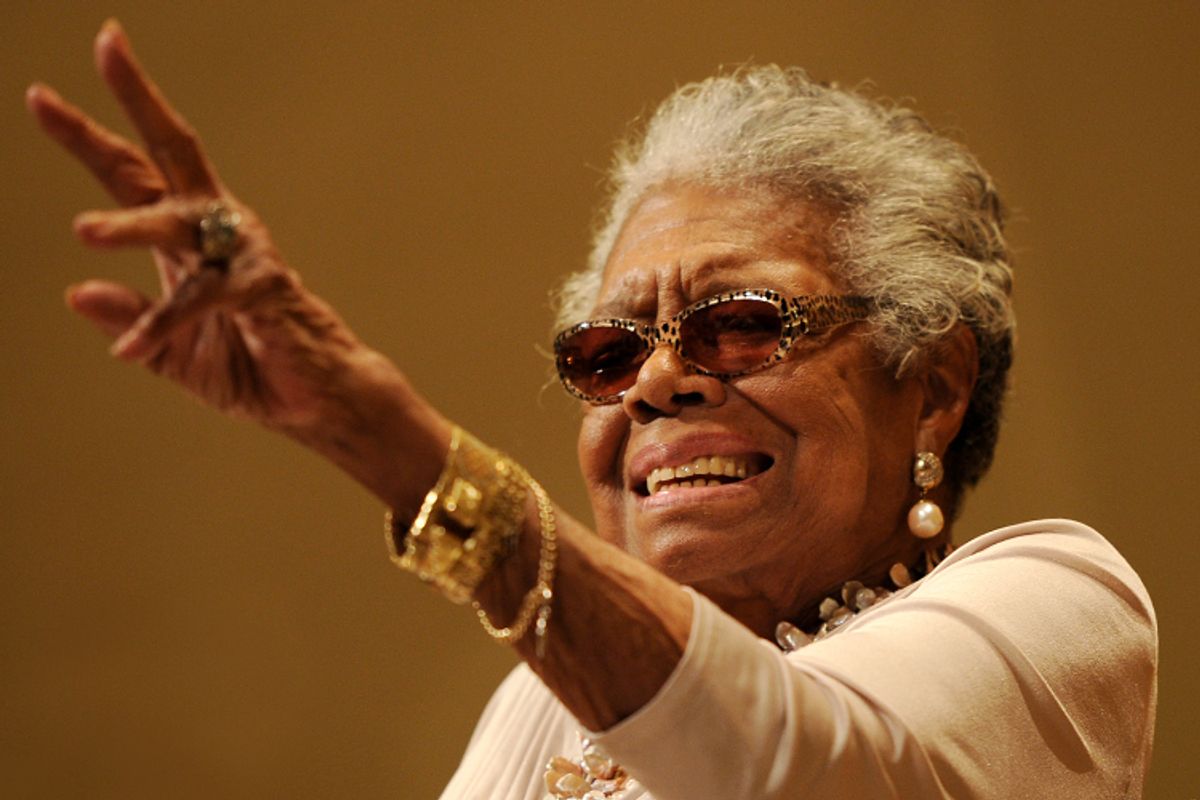 Maya Angelou’s work and words were a mainstay of my childhood. I vividly remember my mother’s copy of "I Know Why the Caged Bird Sings" lying around the house. She most likely purchased it after Angelou read a poem at the inauguration of Bill Clinton in early 1993, when sales of the book, first published in 1969, skyrocketed. Even though I didn’t read “Caged Bird” until college, mistaking it, as I did, for some of my mother’s fluffy self-help literature, I became aware of Angelou’s poetry when her words were featured in the 1993 movie "Poetic Justice." And then a year later, I watched one of my speech and debate teammates do a dramatic interpretation of her poem “Phenomenal Woman” as a competition piece.

Long before I understood her literary and artistic importance to American life and letters, I was seduced by her poetic lyricism, enamored of her regalness, thankful for her light. She carved a road that I could walk not upon first sight, but certainly in my own good time. Mine was a decidedly black girl’s introduction to her work, and I marvel now – recognize now — the privilege I had to grow up in a house and in a world shaped by her work and her words.

In college I finally grappled with “Caged Bird” in an honors seminar focused on African-American autobiography. In that seminar, we used black writers’ life stories to craft our own; in many respects Maya Angelou’s narrative helped to give me the tools and the courage to tell my own story – to know that my small town Southern life, my enduring love for my grandmother and the many dusty, barefoot, country summers we spent together had value not just personally but in terms of collective African-American experience.

"Caged Bird" is one of the few texts in the African-American literary nonfiction canon to give us a vivid picture of early 20th century black girlhood. And it is part of a cadre of texts that kicked off the black women’s literary renaissance at the beginning of the 1970s. These are things I learned on my way to becoming a scholar of African-American’s women’s lives, literatures and histories.

But on my way to becoming a grown woman, Maya Angelou’s wisdom deeply shaped and equipped me to engage in healthy relationships. She once told Oprah, “When people show you who they are, believe them the first time.” My mother told me that in my early 20s and then remixed it for me: “People will tell you who they are, if you only listen.” These two statements rise to the level of biblical truth for me, making me listen carefully to the things that people both tell me and show me about who they are. “God,” my mother always says, “never lets His children go into situations uninformed.” I call this Motherwit at its finest.

And that information frequently comes in the form of people showing us who they are. But these words don’t just constitute a personal truth for me. They constitute a political truth.

Unfortunately, in the less than seven days since Maya Angelou passed away, among the many well-deserved, loving tributes to her have been people challenging her importance and credibility. These misguided people show us who they are, their subtle racism, and in so doing, show us a continuing ugly side of who we as a country are. Writing last week at the New Republic, Mark Oppenheimer railed against our reference to Maya Angelou as Dr. Maya Angelou. Though she has over 50 honorary doctorates, Oppenheimer apparently believes that on the occasion of her death, it is important and appropriate to challenge our right to refer to her as a Dr.

Oppenheimer notes that Dr. Angelou went by this appellation on her website and in her Twitter handle, and was referred to in this manner by Wake Forest where she was a member of the faculty for over 30 years. He accuses Wake Forest of “going along with the ruse.”

To him and his ridiculousness, I say, “Oppenheimer, be for real.” I have an earned doctorate and  I balk sometime at the way that members of the African-American community fawn over the title "Dr." I am frequently appalled at the ease with which students and others will refer to men as Dr., whether they have a doctorate or not, while continuing to refer to me and other female professors as Miss. So I understand some of the frustration with the misappropriation of this title.

But I also know that when my stepfather’s preacher friends refer to him affectionately as “Doc” they are conferring respect for his age, and his more than 40 years as a minister and pastor. Their informal conferring of that title hearkens back to a moment when black people had far more limited access to means of higher education, and were frequent targets of disdain and disrespect from white people. Cultural practices frequently outlast political realities.  And conferral of this title fits within a long tradition of African-Americans' naming their children things like “Mister” and “Lieutenant” and “Honorable,” the latter two having been names of men in my home church.

Maya Angelou’s scores of honorary doctorates honor a life of work befitting the conferral of doctoral status, since doctorate signals the ultimate mastery of a field. And a master she undeniably was. But the title is also part of an attempt to signal via a title that Dr. Angelou is deserving of a certain level of respect and deference. That deference has never been automatically conferred to black women. It has always been contested ground.

This refusal of deference is the reason why, when I researched my doctoral dissertation, I found it hard to locate some of the local women I was researching because they frequently went by monikers like “Mrs. S. Joe Brown” or “Mrs. N.F. Mossell.” Mrs. Brown and Mrs. Mossell were nationally known black women, but the fact that they adopted their husband’s initials was very much about demanding respect in a world where white women and men younger than them called them by first name, if not simply “girl.”

More than a century after these women lived, showing respect to black women, even in death, is so difficult that the infamous Westboro Baptist Church feels the need to come protest Angelou’s funeral. In her defense, a group of self-proclaimed American patriots known as 2 Million Bikers to D.C. has pledged to build a wall to ward off the protesters. Are black women not allowed dignity in death? Must their funerals become a brawl and a ruckus?

So while we might need a conversation about our societal infatuation with titles, that is not a conversation that should be waged on Dr. Angelou’s grave. We are in no way diminished by conferring her the honor of the title "doctor." On the contrary, it is clear that we acknowledge the importance of her contributions in the way she saw fit.

I know black women say this kind of thing often, but it holds true. I stand on the shoulders of Dr. Maya Angelou. She is one among a cloud of black women witnesses who helped me to know that my story mattered, that the wisdom my grandmother and mother and black women in my community taught me could take me all the places I will ever need to go. In writing down her story and letting it tell our political and cultural truths, she makes it possible weekly for me to write my own story.

So many of us, uncaged, fly free because she, through her words, her power and the special way she cared for us, gave us roots and wings.