Jonah Hill shows how to say you're sorry 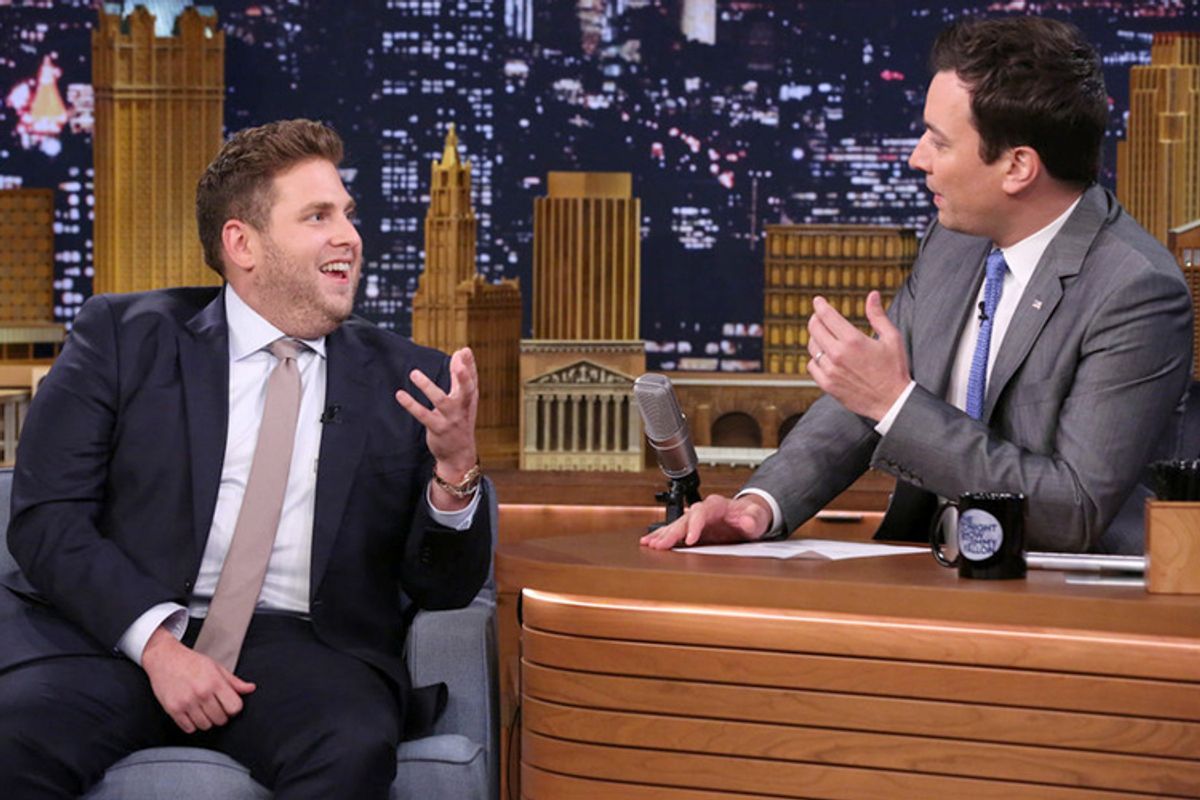 Nice turnaround, Jonah Hill. On Tuesday, the actor found himself the center of controversy when TMZ released a video of him telling a paparazzo who was harassing him while he walked down the street to "Suck my dick, faggot." It was an uncharacteristically hostile response from a man not known for outbursts, especially of the homophobic kind. Just earlier this year, Hill tweeted out his support to the LGBT community during the Sochi Olympics, telling fans to "Help us show Russia & the world that #LoveConquersHate." Back then, he told E!, "I have tons of gay friends, gay family members. It's like saying, why do you think people should breathe? I support anybody doing whatever they want to do to be who they are."

The two-time Oscar nominee seemed to quickly regret his word choice. He promptly appeared on Howard Stern's radio show to declare to that "What I said in that moment was disgusting." Then on Tuesday's "Tonight Show," what had been planned as a routine appearance to shill "22 Jump Street" became, by necessity, a moment in which Hill would have to publicly acknowledge his tabloid exploit. And so he did, adroitly.

"Unfortunately, this isn't a joke," he said, explaining that the paparazzo had been following him and "antagonizing" him with name-calling all day. "In response, I wanted to hurt him back, and I said the most hurtful word that I could think of at that moment. I didn't mean this in the sense of the word; I didn't mean that in a homophobic way" adding as he paused to think of how to express himself, "I think that doesn't matter. Words have weight and meaning, and the word I chose was grotesque. And no one deserves to say or hear words like that. My heart's broken, and I genuinely am deeply sorry to anyone who’s been affected by that term in their life. I'm sorry, and I don’t deserve or expect your forgiveness."

Hill has a movie to promote and a career he'd likely prefer not tainted with the stain of damaging remarks. But he nevertheless managed to pull off a humble and sincere-sounding mea culpa, one that acknowledged his wrongdoing without the all too familiar enraging conditional message that maybe you just didn't understand or the words were taken out of context or hey, sorry if you feel bad. It wasn't, thank God, a clumsy denial or insistence that he'd been misheard. It was straight up ownership of the wrong, an excellent example of how a grownup should atone for bad behavior. You say you're sorry, no strings attached. You say you've learned and you won't do it again. It seems easy, and yet one could make a full-time job out of noting examples of it executed so very poorly.

Yet the whole incident has been more than just an example of an exasperated poor word choice. It's given a little window into a disconnect that still persists in a lot of people's minds, people who aren't movie stars. People we've all seen and heard. It's easy to believe yourself open minded and tolerant when that tolerance isn't challenged. But when happens when you're tired and angry and somebody gets up in your face? Then who are you? Are you going to deploy whatever power you may have over the other person and hit back with homophobia, or racism, or misogyny? Are you going to try to put that person in his or her place, just because you can?

Hill's apology sounded genuine, and his careful and articulate statement reveals that this is a man who got his start as a writer and who know exactly the power of words. But as my colleague Daniel D'Addario points out, Hill is also an actor whose films have heavily relied on easy -- and ugly -- jokes at the expense of gay people. And if he truly wants people watching him to behave in a manner that, as he says, doesn't "add more ugliness to the world," maybe he can start by more carefully reading his own scripts.