As a lifelong Transformers fan, I found it a massive disappointment to see the man behind that booming voice 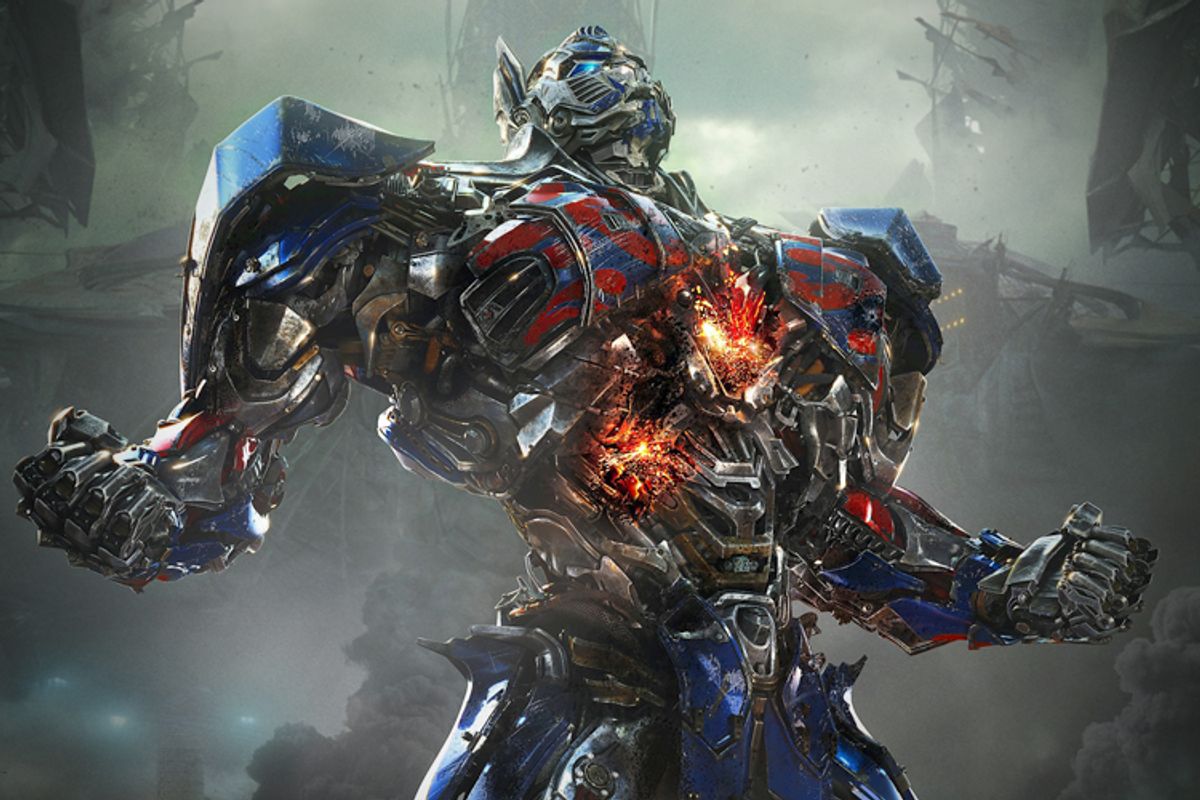 "I don't think it's a truck at all. I think we just found a Transformer."

I'm not going to lie. I, too, laughed when I first heard Mark Wahlberg utter those words in the new trailers for "Transformers: Age of Extinction." The smug satisfaction on Wahlberg's face as he discovers what we all knew the instant that dusty truck rolled onto the screen is hilarious. But the clip also saddened me because it underscores what has always bothered me most about Michael Bay's envisioning of the franchise that gave me so much joy as a kid. What was the song so many tween and teen boys recited ad nauseam as they clik-clakked Megatron into pistol form or flew Starscream as an airplane around the yard back in the 80s? "The Transformers, more than meets the eye! The Transformers, robots in disguise!"

I've seen all of the Transformers movies and, with the exception of the first ten or fifteen minutes of each, it seems like they are never in disguise. Bay seems to have an obsession with towering, alien robots walking the earth, battling each other to catastrophic ends in, essentially, plain sight. Wahlberg's exclamation makes it seem like there are a Transformers everywhere, strewn about the earth like Pokemon and all we have to do is collect them. Bay, for the most part, dispenses with the hiding right under our noses thing and gets the big, metal giants out in the open as spectacles for gawking humans as soon as possible. Where's the mystery in that? Yes, I know the notion of extremely discreet, tenement-sized aliens would be tough to pull off, but these are some very expensive motion pictures.

This morning, the Playstation people announced the upcoming release of a new Transformers video game that will closer align the original Transformers universe with the increasingly divergent Michael Bay Transformers universe. Besides the fact that such a merging is unwarranted and unwieldy, the behind-the-scenes video for "Transformers: Rise of the Dark Spark" is narrated by Peter Cullen -- and he's sitting right there talking about it! What's the deal with that? Everybody who cares understands that Peter Cullen has been the grave, sonorous voice of Optimus Prime dating back to Hasbro's 80s weekday cartoons-slash-commercials. But no one wants to see the 72-year-old voice actor reading lines stiffly off of cue cards about a third-person shooter that he will almost certainly never play or possibly even see.

Since Michael Bay started playing fast and loose with everything in the franchise, Optimus Prime's voice has been the only consistent element of the Transformers. For older fans who have not yet given up, it is, in some small way, reassuring -- that is, as long as it comes out of our big, kind, red and blue hero Optimus Prime's face. Playstation putting Cullen front and center is just another indication that all the mystery is being stripped away. It's a small thing, certainly. I'm complaining about a behind-the-scenes video game promo that even most gamers will never see. But I guess it's because I know that in less than three weeks, when "Age of Extinction" premieres, I will be sitting there in an Imax theater with twelve dollars worth of popcorn and Cherry Coke in my lap watching Optimus Prime fight a Grimlock that looks more like a metal dragon than a dinosaur -- horns courtesy of Michael Bay and the nations growing obsession with dragons -- and I'll be helpless to do anything about it.