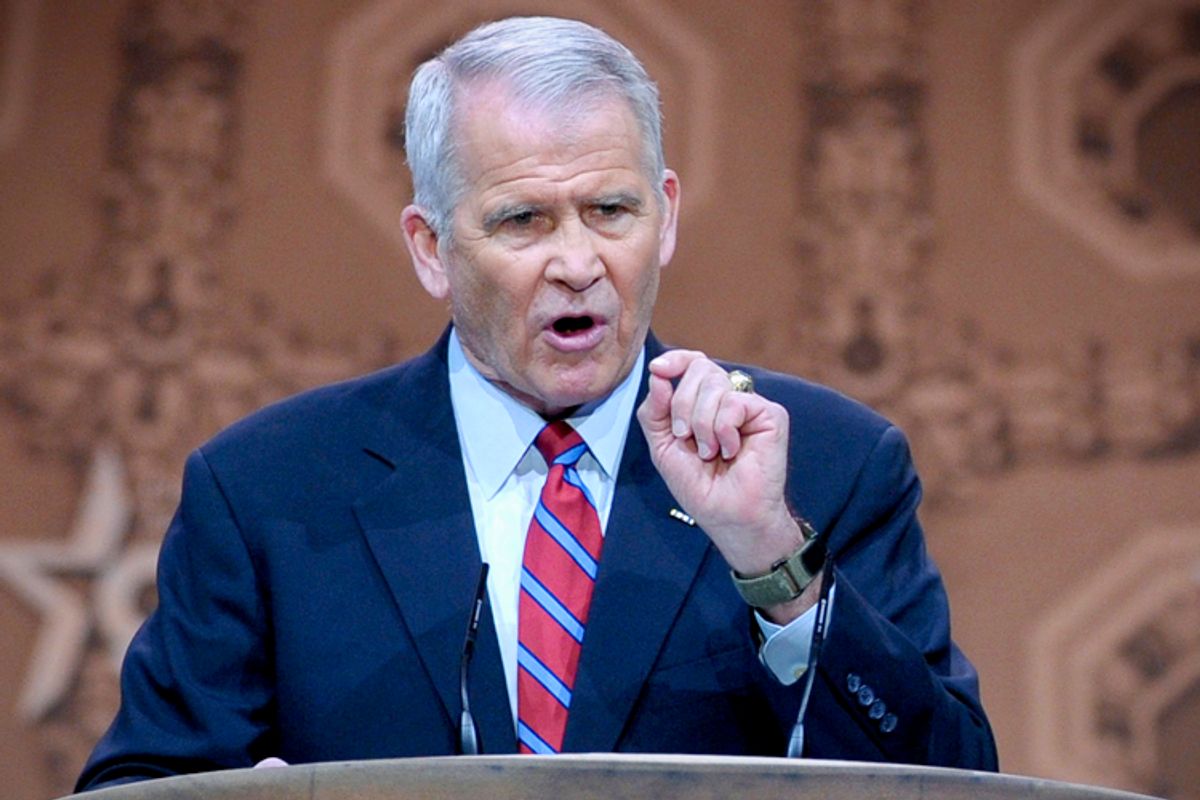 One of the tangential complaints about the Guantánamo POW swap that has the entire political establishment working itself up into a full-blown hissy fit is that the White House failed to be savvy enough to anticipate the right's reaction. This is a fair complaint considering the vast experience Democrats have with manufactured right-wing hissy fits over the years, but in some senses it's unfair to the Obama administration, which has had to face fewer of these hypocritical national security frenzies than most. It's true that Benghazi!™  has dogged them beyond what any sentient person would think was reasonable, but it's more of a brand name than a real scandal. Their most lauded national security achievement -- the killing of bin Laden -- was so universally celebrated that they were left with nothing but petulant whining that George W. Bush really deserved the credit.

It's possible that the White House was lulled into complacency by that experience and believed because a POW was involved in this exchange it would render the other side impotent. After all, it would be terribly hypocritical for strong supporters of the military to criticize the administration for bringing home America's only prisoner of war. Sure they might get criticized for sending back some Taliban prisoners, that goes without saying. And yes, the issues surrounding Guantánamo are always controversial. Needless to say the Congress was going to squeal when it found out the administration has brushed off its obligation to inform them of any Gitmo transfers 30 days in advance, and with some justification. But, by God, one thing for which the right could never be criticized was the fact that they lived up to the credo that says no American soldier will be left behind on the battlefield.

Wrong. The propensity of right-wingers to be blatantly inconsistent with their most cherished principles is truly astonishing and should never be taken for granted. The White House did err in assuming that the chauvinist Republicans (and the many timorous Democrats who fear them) would not criticize this release simply because a soldier was involved. (All you had to do was look back at Rush Limbaugh's willingness to slander any soldier, officer or enlisted, who dared to criticize the war effort just a few years ago to see how foolish that assumption was.)

But there are hypocrites and there are hypocrites. And not even the sainted POW John McCain's stunning flip-flop on the Bergdahl can come close Lt. Col Oliver North (Ret.) guy for sheer, audacious hypocrisy. Let's first revisit his comments from 2011 on his Facebook page on the matter of Bergdahl specifically before we go any further:

Today, I received from the National League of POW/MIA families, a "Never Forget Bracelet" emblazoned with the name of Sgt Bowe Bergdahl.  He was seized on June 30, 2009 in Afghanistan and is being held by the Haqqani Organization -- a Taliban affiliated terrorist group -- in northwest Pakistan. Sgt Bergdahl and his loved ones here at home deserve our prayers and encouragement until he is rescued or released. That's what we do. We're Americans.

"That's what we do. We're Americans." That sounds like an unequivocal position -- which shouldn't surprise us coming from a man who felt so strongly about this that he personally directed an illegal plot to sell weapons to one of our most hated enemies in exchange for the release of American hostages:

In 1985, while Iran and Iraq were at war, Iran made a secret request to buy weapons from the United States. McFarlane sought Reagan's approval, in spite of the embargo against selling arms to Iran. McFarlane explained that the sale of arms would not only improve U.S. relations with Iran, but might in turn lead to improved relations with Lebanon, increasing U.S. influence in the troubled Middle East. Reagan was driven by a different obsession. He had become frustrated at his inability to secure the release of the seven American hostages being held by Iranian terrorists in Lebanon. As president, Reagan felt that "he had the duty to bring those Americans home," and he convinced himself that he was not negotiating with terrorists. While shipping arms to Iran violated the embargo, dealing with terrorists violated Reagan's campaign promise never to do so. Reagan had always been admired for his honesty...

While probing the question of the arms-for-hostages deal, Attorney General Edwin Meese discovered that only $12 million of the $30 million the Iranians reportedly paid had reached government coffers. Then-unknown Lieutenant Colonel Oliver North of the National Security Council explained the discrepancy: he had been diverting funds from the arms sales to the Contras, with the full knowledge of National Security Adviser Admiral John Poindexter and with the unspoken blessing, he assumed, of President Reagan.

If there's one person you would expect to defend this POW exchange it would be Oliver North. He was a critical player in the most infamous hostage deal in American history. But if you thought that, you'd be wrong. And his reasoning is almost beyond comprehension considering his history.

He starts by making the dubious claim that Bergdahl is not a POW, but rather a hostage (something he knows something about). And then he complains that the government "must" have secretly paid a ransom, which he finds outrageous. Seriously:

"Someone paid a ransom," North said. "Whether the Qataries paid it, or some big oil sheik, or somebody used our petrodollars, but there was a ransom paid in cash for each one of them, my guess somewhere in the round numbers of $5 or 6 million to get Bergdahl freed. I know that the offer that was on the table before was close to a million."

He then demanded that reporters ask the administration how much they paid and Did the government of the United States, either directly or indirectly, finance a terrorist organization?”

Because that would be very wrong. Unless it's done by a Sainted Republican president. (And hey, if some enterprising young colonel can kick some of the profits to some "freedom fighters" somewhere, all the better, right?)

North is far from the only right-wing hypocrite fulminating about POWs and hostages today after earlier beating the administration over the head for failing to secure Bergdahl's release. But he takes it to a new level. After all, he was only spared from jail time by the fact that a judge ruled that the congressional inquiry that immunized him for his testimony made it impossible to charge him with a crime. It takes some real chutzpah for him to even use the word "ransom" in public.

So, it's fair to grant the administration critics this one point. When you see the inconsistency and rank hypocrisy of which Republicans are capable, it's hard to see why a Democratic administration would assume that Republicans would reflexively support  "the military’s time-honored ethos to leave behind none of its own on the battlefield." They have shown over and over again that nothing is so sacred that they can't toss it aside for cheap political advantage.