In this striking new film, a woman has sex, gets pregnant and has an abortion. And she isn't punished for it! 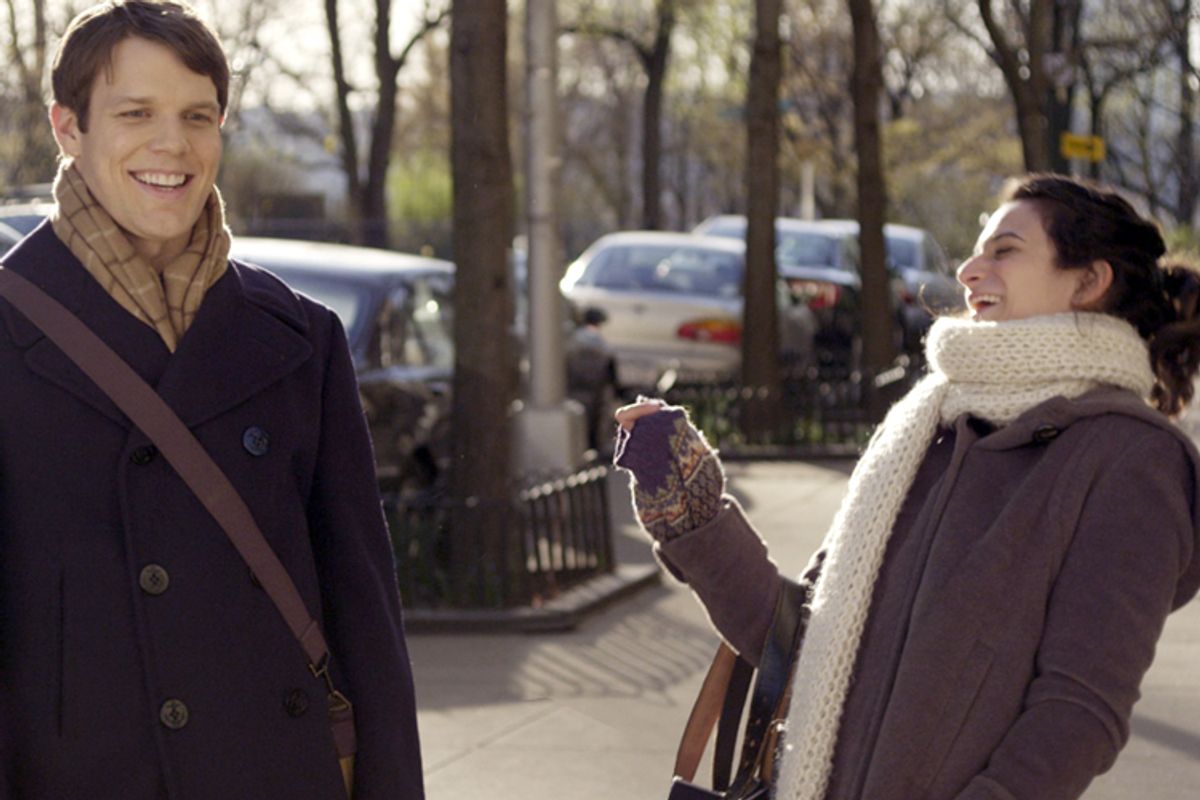 I know that "Obvious Child" -- Gillian Robespierre's new film about a woman who, in addition to doing a lot of other things, also has an abortion -- is actually a romantic comedy. But in the current political and media landscape, it's also kind of a fairy tale. And I mean this in a good way and a profoundly sad way.

Donna Stern -- a lovable semi-adult played by Jenny Slate -- copes with a breakup by getting shit wasted and having unprotected sex with a cute stranger. (When the question of a condom is broached by a friend, Donna replies, "I remember seeing a condom. I just don't know exactly what it did.") Weeks pass. Her boobs get swollen. She learns she's pregnant. She decides to have an abortion. Donna is a 20-something comedian who pays the bills with a day job at a book store on the verge of shutting down. (The shop in the film is actually the West Village's Unoppressive Non-Imperialist Bargain Books, a detail that made me feel like this). She is that specific kind of upper middle class Williamsburg broke, which is to say that she is not actually broke in any meaningful way, but it still doesn't lend itself well to supporting another person. She also -- and this is really the most important part -- just doesn't want to be a parent at this point in her life. It's kind of that simple.

And the film never once punishes her for any of this. No one shames her for the exuberant but potentially risky drunk sex she had with a stranger. (This drunk sex is, by the way, perfectly set to Paul Simon's "Obvious Child," which also gives the film its title.) No one questions her decision to terminate the pregnancy. She has two completely loving and supportive friends who are with her from point zero. Even her mother, a serious-minded business professor with whom Donna clearly has a kind of strained relationship, is completely on board. In fact, rather than serve as a wedge, Donna's abortion is the catalyst for an emotional moment between the two women. It actually makes them closer. Even the drunk stranger -- a sweet norm named Max, played with sweet norm charm by Jake Lacy from "The Office" -- is warm and reassuring. He's with her during the procedure, and the film closes with the new couple snuggling on the couch watching a movie.

This is part of why the film feels like a fairy tale. At this moment -- as laws across the country proliferate and put basic reproductive healthcare further out of reach for millions of women, as lawmakers use abortion restrictions as blunt political instruments to stir up their base -- a movie that shows an emotional but profoundly uncomplicated abortion story feels almost too good to be true. Donna's experience is unquestionably a product of her whiteness, her class, her geography and unique circumstance -- she's lucky. But her story is representative of many women's experience of abortion in places in the country where the legality of the procedure and the status of abortion clinics remain uncontested. These women get pregnant. They don't want to be pregnant. They feel nervous because it's a medical procedure that can be kind of expensive. They worry their moms will be mad. They get the abortion. They move on with their lives.

Donna is a fictional character, but Emily Letts -- who recently recorded and shared her own abortion experience -- isn't. Letts recently told Salon that she wanted to go public with her abortion to fight stigma and help give voice to the many, many women who feel very good about their choice to terminate a pregnancy. We rarely get to talk to or about women like Donna and Emily. Even well-meaning pro-choice politicians tend to deploy stories of wanted pregnancies with tragic fetal anomalies or women who become pregnant as a result of rape to articulate why we must protect access to abortion. Rarely do we hear anyone in the halls of Congress say, "The procedure takes about three minutes and requires an afternoon of nursing ibuprofen to recover. Then you go back to work, you take care of your kids, you do whatever it is you were doing before." For many lucky women in this country, that really is how abortion works.

We don't talk about this in life, or in film. As Jill Filipovic at Cosmo recently noted, the odds of dying during an abortion in the United States are statistically zero. But the odds of dying during an abortion on film are 1 in 7. If abortion is even discussed ("shmashmortion") in the first place, the women who go through with the procedure are generally some variation of April Wheeler from "Revolutionary Road." Tragic. Stifled. Probably selfish. Definitely going to die.

I write a lot about abortion. And all too often, I'm not writing about the women -- 1 in 3 women, to be exact -- who access this care. Usually I am stuck writing about politicians. Men, mostly. Men who pass laws that will change the trajectory of millions of women's lives, women who they don't give a shit about. These lawmakers compare women's bodies to cars. To other bullshit. After writing these pieces, I am generally bombarded with emails and tweets from very angry people telling me that I support baby murder. That I am going to hell. That I am probably a slut and that's why I care so much about women's ability to make choices about their own bodies.

When I'm not writing about these men, I am writing about the women who can't access the procedure because of them. The women in Texas' Rio Grande Valley, who must now travel hundreds of miles round and make two separate visits to access basic medical care. Women in Mississippi who may lose the last clinic in their state. The women in South Dakota who now must wait 72 hours before they can get the procedure. Or the women in Michigan who now can't get their insurance -- their private insurance -- to cover this care.

This is the other reason why "Obvious Child" feels like a fairy tale. The devastatingly sad reason. Because it's relatively easy for Donna to get the care she needs. She is lucky, unlike so many others.

I was grateful to be watching someone so lucky. Grateful to laugh and love this character. Donna's story is not representative of every woman's experience of abortion, but it's one woman's story. It's funny. It's immature. It's really complicated. But we root for Donna. She is the star of the film and the hero of her own story. The abortion doesn't change her life, it just lets her keep figuring shit out. It's such a simple thing, but it's also downright revolutionary at this moment.