Who talks like FDR but acts like Ayn Rand? Easy: Silicon Valley's wealthiest and most powerful people 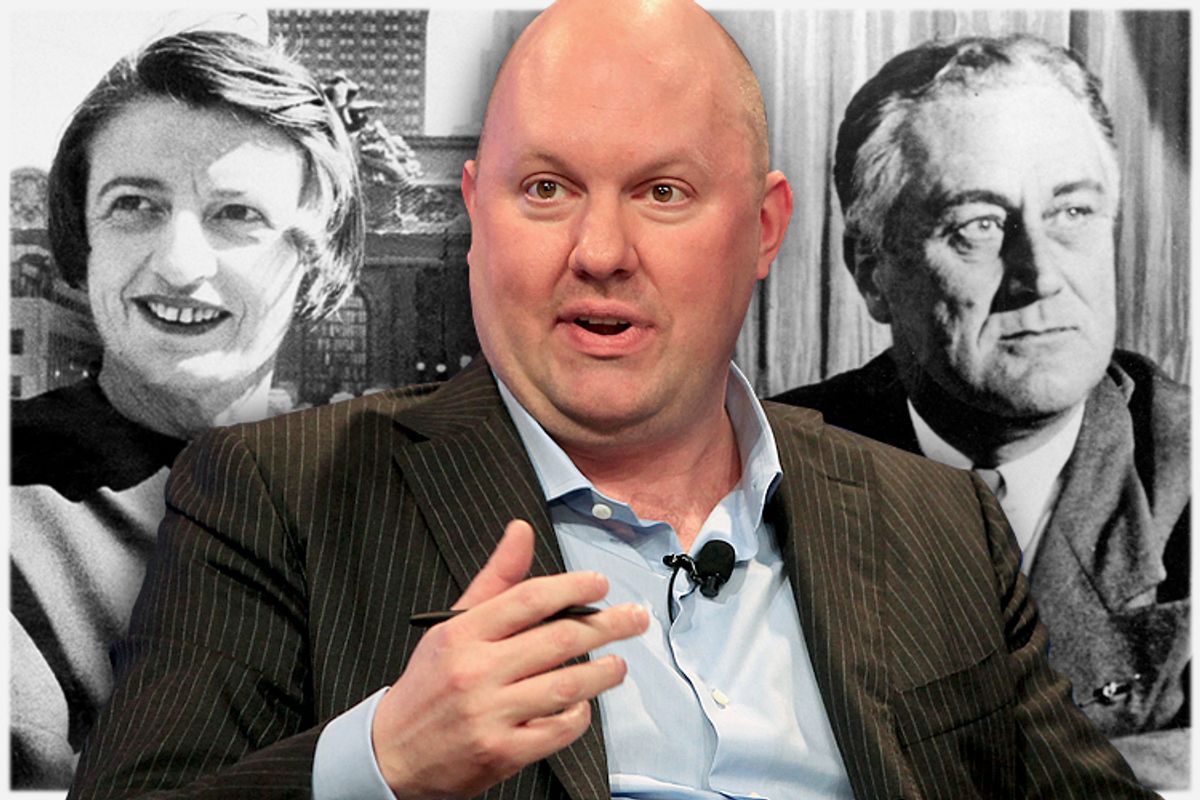 Marc Andreessen is a major architect of our current technologically mediated reality. As the leader of the team that created the Mosaic Web browser in the early '90s and as co-founder of Netscape, Andreessen, possibly more than any single other person, helped make the Internet accessible to the masses.

In his second act as a Silicon Valley venture capitalist, Andreessen has hardly slackened the pace. The portfolio of companies with investments from his VC firm, Andreessen Horowitz, is a roll-call for tech "disruption." (Included on the list: Airbnb, Lyft, Box, Oculus VR, Imgur, Pinterest, RapGenius, Skype and, of course, Twitter and Facebook.) Social media, the "sharing" economy, Bitcoin -- Andreessen's dollars are fueling all of it.

So when the man tweets, people listen.

And, good grief, right now the man is tweeting. Since Jan. 1, when Andreessen decided to aggressively reengage with Twitter after staying mostly silent for years, @pmarca has been pumping out so many tweets that one wonders how he finds time to attend to his normal business.

On June 1, Andreessen took his game to a new level. In what seems to be a major bid to establish himself as Silicon Valley's premier public intellectual, Andreessen has deployed Twitter to deliver a unified theory of tech utopia.

In seven different multi-part tweet streams, adding up to a total of almost 100 tweets, Andreessen argues that we shouldn't bother our heads about the prospect that robots will steal all our jobs.  Technological innovation will end poverty, solve bottlenecks in education and healthcare, and usher in an era of ubiquitous affluence in which all our basic needs are taken care of. We will occupy our time engaged in the creative pursuits of our heart's desire.

So how do we get there? Easy! All we have to do is just get out of Silicon Valley's way. (Andreessen is never specific about exactly what he means by this, but it's easy to guess: Don't burden tech's disruptive firms with the safety, health and insurance regulations that the old economy must abide by.)

Oh, and one other little thing: Make sure that we have a social welfare safety net robust enough to take care of the people who fall though the cracks (or are eaten by robots).

The full collection of tweets marks an impressive achievement -- a manifesto, you might even call it, although Andreessen has been quick to distinguish his techno-capitalist-created utopia from any kind of Marxist paradise. But there's a hole in his argument big enough to steer a $500 million round of Series A financing right through. Getting out of the way of Silicon Valley and ensuring a strong safety net add up to a political paradox. Because Silicon Valley doesn't want to pay for the safety net.

Distilled to their essence, Andreessen's tweets make a familiar conservative/libertarian argument. Technological progress has vastly increased the standard of living of the majority of the world's population. The "Luddites" who worry that robots will eat our jobs have always been proven wrong, and they will continue to be wrong. This trend-line will accelerate, eventually reaching a point where all our material wants will be taken care of, and our main challenge will be figuring out what to do with all our leisure time. "Star Trek," here we come.

But Andreessen does not meaningfully engage with a growing body of research that suggests that there are significant differences between the current technologically driven transformation and the one ushered in by the steam engine a couple hundred years ago. To wit: The Industrial Revolution created job opportunities for the unskilled, but the current revolution in automation is having the opposite effect -- squeezing the unskilled and gradually working its way up the blue-collar/white-collar ladder.

And even in his 17-tweet explanation of why the poor benefit from technology more than the rich, Andreessen doesn't address the interesting question of why, during this most recent burst of technological progress, wages and household income for the majority of Americans have stagnated or fallen. The current debate over the impact of technology on the economy is not a Luddite rerun -- it's fueled by data.

Andreessen also creates something of a straw man, structuring his argument against unnamed forces who want to stop innovation, or "slow" tech change. While there are certainly industry sectors (hotels, taxis) that would like to squelch the threat from Andreessen-funded start-ups, most of the social critics who are seriously engaging with the issues Andreessen is addressing don't believe it is possible or desirable to "stop" innovation. The question is how to respond, politically and socially, to the inequities created by tech innovation and the growing financial inequality that follows in its wake. They're asking what happens to the people who were making their livings as chauffeurs or cab drivers or truckers when self-driving cars are ubiquitous. What happens to the people working in Amazon warehouses when they become fully automated?

The core of Andreessen's platform is laid out in four successive tweets:

You can see how a Silicon Valley software programmer would naturally be attracted to the self-reinforcing integrity built into this feedback loop. The prosperity generated by letting Silicon Valley do what it wants without burdensome regulation or restrictions on trade will pay for the safety net that will protect the people displaced by trade or disruptive tech innovation. Perfect. Call it trickle-down techno-capitalism.

But there's a humongous bug in this code. There is very little evidence that the people who are getting rich off technological innovation are eager to pay for a robust social welfare net, no matter how rich they get. Quite the opposite. Translated into a political program, the Andreessen solution has no constituency. The political coalition that pushes for "letting markets work" is dead set against tax increases and social welfare expansion. To take only the most obvious example: Ro Khanna, a Democratic congressional candidate backed by Silicon Valley's elite to represent Silicon Valley, wants to keep capital gains taxes low and cut taxes on businesses.

This is not a recipe for a strong safety net. Andreessen's trickle-down math doesn't add up. The reality of our current situation is that the rich are getting richer while the rest of us flounder. Some of the "sharing" economy companies that Andreessen invests in offer a perfect demonstration of this thesis. The founders and investors in Airbnb and Lyft stand to become millionaires while the consumers of these services stretch their dollars by giving each other rides or renting out their spare rooms. That's a business mode that not only perpetuates growing inequality but actually profits from the desperation of people having a harder and harder time making ends meet.

In previous Twitter exchanges, Andreessen has disputed the central argument put forth by French economist Thomas Piketty -- the thesis that growing financial inequality is not only a reality but is an inherent function of how capitalism works today. And yet, he is a living, breathing example of it: a very, very rich man thriving in an era during which the middle class is mired in stagnation.

Technological progress may ultimately usher in an era of affluence so great that our main dilemma each day will be trying to decide whether we should write a symphony or paint a masterpiece. But in between then and now, there will be great dislocations and the wealthy can be counted upon to use their riches to make government work for their own interests rather than for the general welfare. Because that's obviously what's happening right now, and it's very difficult to see how simply getting out of Silicon Valley's way will change that fundamental dynamic in any meaningful way.

But it's very easy to see how Marc Andreessen's unified Twitter theory of trickle-down technocapitalism justifies Andreessen -- and by extension, all of Silicon Valley -- in continuing to keep on doing just what's he's doing now. Nice work, if you can get it.