The Texas GOP still thinks you can cure homosexuality

An alarming new draft of the party platform was just revealed 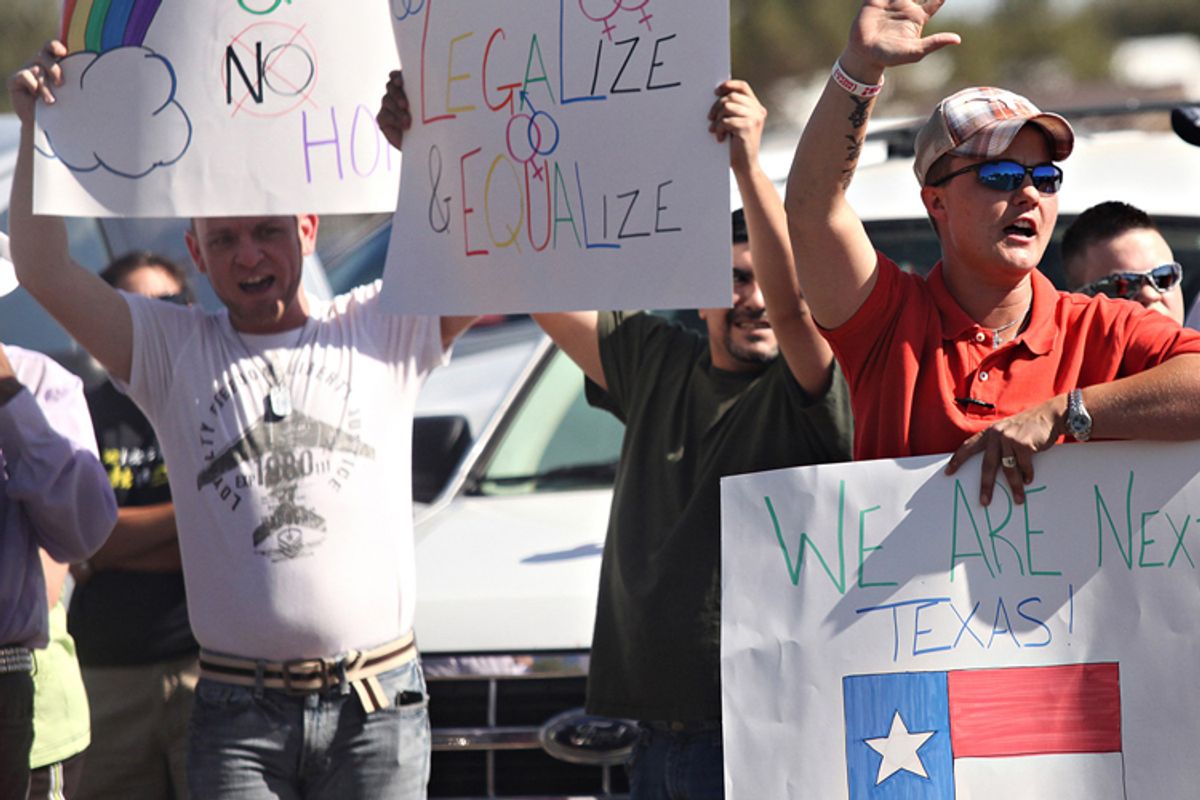 First the good news. This week Texas Republicans removed from the party platform an affirmation that "the practice of homosexuality tears at the fabric of society and contributes to the breakdown of the family unit. Homosexual behavior is contrary to the fundamental, unchanging truths that have been ordained by God, recognized by our country’s founders, and shared by the majority of Texans" -- and even reportedly issued an apology from the subcommittee chair that it had been there in the first place. Now comes the part that suggests there may be still additional work needed before the GOP of Texas – home of Yelp's favorite "best gay cruiser joint" -- fully embraces the 21st century.

As the San Antonio Express-News/Houston Chronicle reports this week, the first version of the party's platform is still far from gay-friendly. It declares that "Homosexuality must not be presented as an acceptable alternative lifestyle, in public policy, nor should family be redefined to include homosexual couples. We believe there should be no granting of special legal entitlements or creation of special status for homosexual behavior, regardless of state of origin. Additionally, we oppose any criminal or civil penalties against those who oppose homosexuality out of faith, conviction, or belief in traditional values." It also continues to "support the enforcement of the State and Federal Defense of Marriage Act and oppose benefits for partnerships outside of marriage provided by political subdivisions," which is funny since the Supreme Court overturned DOMA at the federal level a year ago, declaring it unconstitutional. And here's a fun kicker that's been recently added: "We recognize the legitimacy and value of counseling which offers reparative therapy and treatment to patients who are seeking escape from the homosexual lifestyle. No laws or executive orders shall be imposed to limit or restrict access to this type of therapy." Wait, what?

You'd think gay conversion would by now be fully in its death throes. The American Psychological Association has directly condemned the use of the practice since 2009. Last year, California upheld its ban on the practice of gay conversion therapy, calling it a treatment "that the state has reasonably deemed harmful." New Jersey likewise enacted and upheld a similar ban in 2013,  with Assemblyman Tim Eustace calling it "an insidious form of child abuse." And famously, Exodus International, an organization devoted for nearly 40 years to "helping" gay Christians turn straight, shuttered its operations one year ago and issued a sweeping apology to the gay community, admitting, "For quite some time, we've been imprisoned in a worldview that's neither honoring toward our fellow human beings, nor biblical."

You know why the practice of gay conversion has fallen out of favor? Because it's a terrible, cruel idea, and it's despicable in this ostensibly enlightened age to perpetuate the pernicious lie that gay and lesbian people need any fixing whatsoever. As ThinkProgress reports, a 2013 survey of gay conversion veterans revealed that 92.5 percent of those who responded felt they had "been harmed in some way by their ex-gay experiences." And in the words of the Times' Andrew Rosenthal, "There is no legitimacy or value to this 'reparative therapy,' just as there is no 'homosexual lifestyle.'"

The platform is still in draft form, of course, but let it not be forgotten that this has been thought about, articulated and agreed upon enough already to get this far. This has been viewed as not so morally heinous it should no longer even be a thought in anybody's head anymore. Don't let it be forgotten that this is in the toxic mind-set of Texas Republican Party leadership. And that they can edit all they want, but they can't cure that profound a level of bigotry.