True secrets of psychedelics: Are they everything they're cracked up to be?

By Nathan A. Thompson 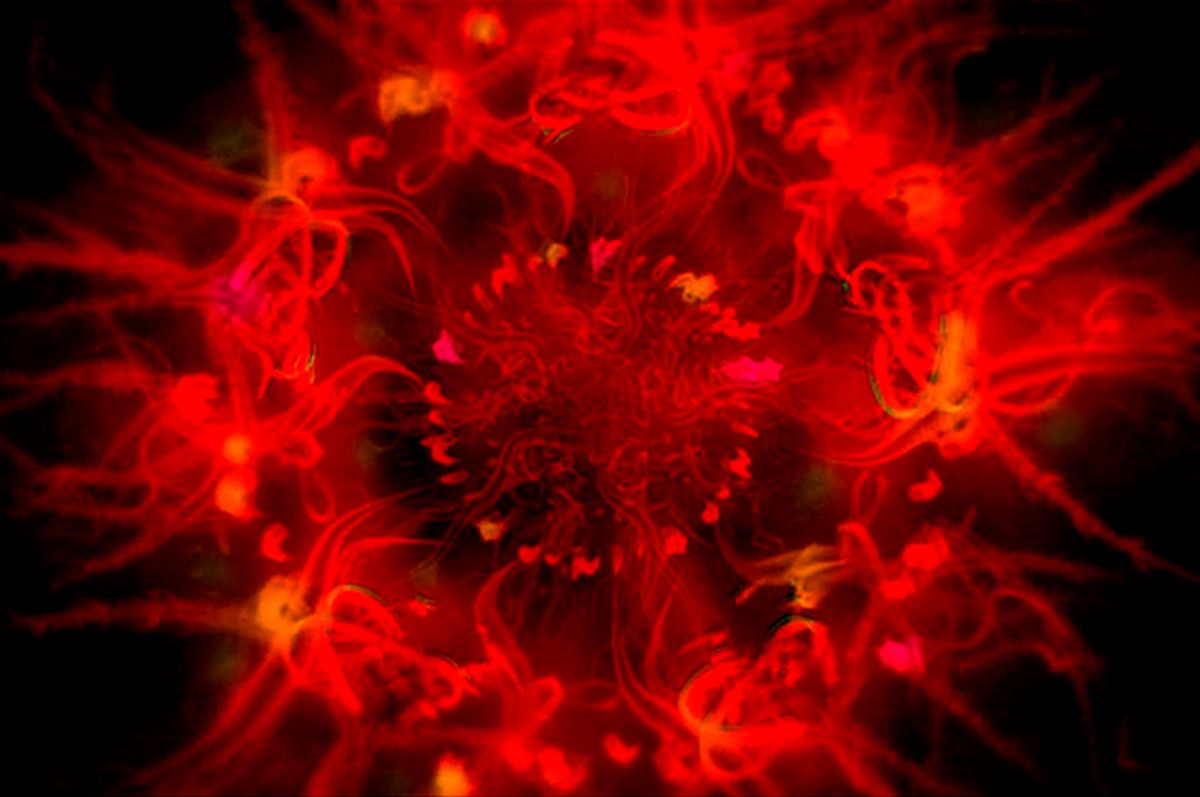 A still from the movie "Enter the Void" of a DMT hallucination. (IFC Films)
--

The cactus skin arrived in the mail in a packet marked “for botanical examination only.” We whizzed it up in a blender. Two truant teenagers in an empty kitchen. We tried mixing the resulting green powder with water and drinking it. The taste was so foul it was all we could do to stop ourselves vomiting. In the end we mixed it with Cherry Coke to ameliorate the flavor and then we drank it all up.

The skin contained a naturally occurring psychedelic drug called mescaline. Soon, everything seemed to vibrate. It was as if the walls, windows, even the chairs were humming a low, beautiful melody. Then I noticed that we were speaking in colors. My friend’s words were blue swirls and mine were green. Our conversation curled and twisted in front of my eyes like smoke in a vacuum chamber. Later I held a glass of water, gazing at it for what seemed like an immensely long time, its utility swallowed up in its beauty and it seemed that the whole Earth existed within that glass and the thought occurred to me: “I’m in the presence of God.”

Ten years later I was staying in a tiny monastery deep in a Thai forest. I had been living and meditating there for close to a month. My mind was still -- still in the way a tuning fork rests after being struck for a long time. I sat outside watching the fading light graze the trees, feeling egoless and empty of thought. Butterflies erupted from the green foliage in a movement that seemed so excessively beautiful I was thunderstruck and as I looked, I thought: “Damn, this is exactly like mescaline.”

It’s not just me who has made the link between psychedelic drugs and meditation. Indeed, the link between psychedelics and spiritual experience was the first line of inquiry Timothy Leary and his cohorts pursued in their 1960s Harvard experiments. In the 1990s, Dr. Rick Strassman ran a series of experiments using a powerful psychedelic known as DMT, and he too noticed the similarity: “[The effect of] DMT has a similarity with experiences that are possible with a lot of meditation,” he said.

Scientists are currently conducting separate studies on psychedelics and meditation -- both are being trialed to treat the same conditions. A review study by the Journal of the American Medical Association, released in March this year, found that meditation may be as effective as medication in treating conditions such as depression and anxiety. Hot on the heels of this study was the Psilocybin Cancer Anxiety Study at NYU’s Bluestone Center for Clinical Research, which found that Psilocybin (the active drug in “magic mushrooms”) was effective in treating anxiety and depression in terminal cancer patients. There are now dozens of studies that document how both meditation and psychedelics can treat depression, addiction, anxiety and PTSD.

So if psychedelics produce similar effects to long periods of meditation and other austere religious practices, could we have stumbled upon what Strassman calls “the spirit molecule”? Are psychedelics an alternative to spiritual practices?

Hardly, say the Buddhists. The second noble truth of the Buddha is that “the origin of suffering is the attachment to desire.” Psychedelics are by their nature an experience, a strange and beautiful one but often elusive. This creates a craving to have the experience again. It is this craving that is the Buddhist definition of discontent. Rather than freeing the mind from attachment, psychedelics create more.

Perhaps the gold standard to measure whether psychedelics are a good substitute for meditation is to see whether fundamental changes in character occur. A meditation instructor once told me: “When I took LSD in the '60s, it was profound, but it didn’t help me develop the character to live from that truth day by day – without grounding in morality and mindfulness it was merely a flash of insight.”

Richard Alpert, who was one of the first psychologists to study LSD, and later became the spiritual teacher Ram Dass, has a similar view, “I see them [psychedelics] as a door opener and a catalyst and a facilitator; I don't see them as a full path.” Alpert also describes what his Indian guru told him after trying LSD himself: “Your drug is useful. It would allow you to come in and have the darshan [vision] of Christ, but you can only stay for two hours and then you've got to leave. It would be better to become Christ than visit him, but your medicine won't do that, because it's not the true samadhi [enlightenment]."

But psychedelics are a catalyst for change, according to writer Graham Hancock. According to Hancock, the means you use to gain insight (whether they are psychedelics or meditation) are the least important aspect; “what matters is what you do with visionary experiences once you have had them, how you integrate them into your life, what lessons you learn from them and how you act on those lessons.” Indeed, according to follow-up studies from the scientific literature, the effect of the psychedelic experience does seem to sustain a positive change without the need to repeat it. Researchers at New York University reported in the Archives of General Psychiatry that their subjects reported a significant improvement in mood and outlook after six months.

This may be true of those individuals who have taken medical-grade psychedelics in a clinical setting, but what of the thousands of people who are doing so haphazardly, procuring them from the black market? Personally, I had a hard time integrating my visionary experiences with my real life. I was sometimes confused and frightened by what I saw. It was a relief then to find the well-trodden Buddhist path. Indeed, most mystical traditions have detailed maps covering the kind of mental and metaphysical spaces you pass through on the way to God. Buddhism has the “Jhanas,” yoga has stages of “Samhadi” and Sufism has “four stages”. These maps allow a teacher to help you process what comes up in your spiritual practice. Strict morality is always a prerequisite to walk such paths or they won’t teach you. These kind of healthy boundaries are what is lacking when you take psychedelics.

But supposing you don’t have the time to pursue rigorous meditation? Why spend years and (some would say) lifetimes rotting our butts on the meditation cushion when we can take the red pill and get it all at once?

I heard Zen priest Kokyo Henkel describe it this way: Imagine spiritual development is a mountain. Psychedelics will take you on a helicopter ride to the top, you will see tumbling clouds and vast craggy distances but when the ride is over you are back where you started. Meditation is a way to climb the mountain, slowly, sometimes painfully, but when you reach the summit it is completely different from the summit-top you saw on your helicopter ride, because the journey has transformed you.

Perhaps this is idealistic, and I certainly wouldn’t deny anyone the use of psychedelics for medical reasons or for spiritual advancement, if done so with wisdom and respect. Indeed, given the dire state of the biosphere and the ecological crisis, perhaps the human race is out of time to meditate ourselves into the enlightened consciousness needed to instigate change. Given that psychedelics tend to assure people of the fact that we are part of nature and connected to every person, plant and animal on Earth, perhaps we should be using them to create happier, more responsible citizens now.

Meditation and yoga have a long history of creating such people, and both have the advantage of being legal and safe as any intense religious activity can be. The immediacy of the psychedelic experience and its profound effects make these substances deserving of interest and study but we can’t yet say they are a viable alternative to the tried and tested spiritual paths.

When I look back on that mescaline-laced afternoon when I was a teenager, I remember a life-altering experience, something the mystics would call an “awakening.” But it was meditation that allowed me to begin to awaken permanently. Alan Watts summed it up when he said:

"The psychedelic experience is only a glimpse of genuine mystical insight, but a glimpse which can be matured and deepened by the various ways of meditation in which drugs are no longer necessary or useful. If you get the message, hang up the phone.”

By Nathan A. Thompson

MORE FROM Nathan A. Thompson