I quit drinking, then I got addicted to food

Booze was out of my life, but cakes and ice cream took its place -- and my new habit was no easier to kick 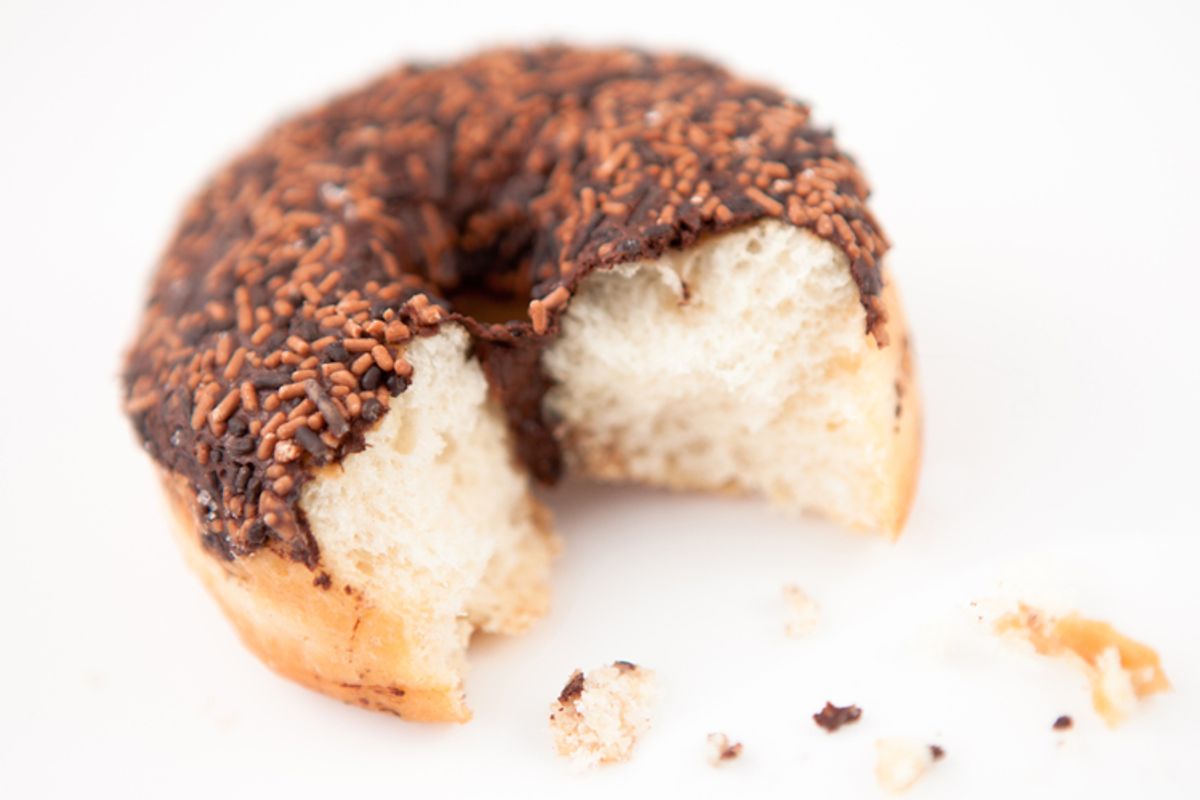 “So next time the temptation to drink arises, let’s eat a little, or sip something gooey. At least, it puts off the drink for an hour or two, so we can take another step toward recovery.” – Living Sober

The book containing this passage is often recommended for newcomers to Alcoholics Anonymous, read out loud and sold in meetings. Like many people in early recovery, I took the advice to eat sweets any time I experienced drink cravings. I did it again and again—working my way through cookies and ice cream and gooey sheet cakes—until I found myself with a whole new addiction on my hands.

Way before I ever started drinking, I had a weird relationship with food. As early as I can remember, I felt panicked if my babysitter doled out just two cookies during snack time. As a little kid I would scarf down an entire bag of potato chips, wanting it to satisfy something that wasn’t (physical) hunger. But my nascent food addiction seemed to disappear once I started using alcohol and other drugs in my teens. When I think about my time as an active alcoholic and drug addict, food was not a big part of my life. It was sustenance, or a hangover remedy, but not a source of joy or an emotional fix. Even as a daily pot-smoker, my mind was focused on the next hit of THC, not the next pint of ice cream.

I got sober after my daily pot smoking, drinking and painkiller habit caught up with me at the age of 25. I’d been fired by my job and my therapist—yes, people you pay for a service can fire you—and most of my “friends” were people I’d never seen in daylight hours. I came into recovery via 28 days at a rehab in upstate New York. Days after my arrival, I began to experience an unexpected side-effect of sobriety: hunger. No longer numbing myself with booze and drugs, I reverted to my seven-year-old self, panicking about not having enough cookies to fill that emotional void.

The treatment facility didn’t have sodas or candy, but there were cookies and cakes and puddings at the end of every meal. The meals were carby, fatty institutional foods, which I loved. And a 24-hour station offered unlimited coffee, tea and peanut butter and jelly sandwiches. In those first few weeks, my only solution to my intense cravings for Vicodin and beer was to clean my plate and ask for seconds. Along with smoking cigarettes, eating staved off the urge to sign myself out and call my dealer.

I left rehab with new hope and a new pot belly, and found my way to AA. It seemed like in every meeting, someone would share about eating pints of ice cream at night to get through those first days and months—or even years—of life without booze and drugs. With bars no longer such an appealing option, my social life began to revolve around getting food with other sober people. Before, during and after meetings, I constantly made a beeline for the snack table, which often overflowed with donuts and cookies. Celebrating sober anniversaries called for huge, sugary sheet cakes.

Saturday nights during my first year were the hardest. I didn’t fit in with my old drinking friends anymore, but being social with a new group of people after meetings was sometimes more effort than I could handle. So I would sneak off to pick up a cake (yes, a whole cake), or a pint of ice cream. Sometimes I’d buy both, and consume them together like a sugar-and-fat speedball. Hidden out in my home, alone, I would gorge myself with complete abandon—the same way I had once enjoyed locking myself in for a spree of opiates and alcohol.

I became obsessed with a specific flavor of Haagan Dazs ice cream called “Bananas Foster,” and I’d walk for blocks looking for a deli that sold it. I would switch up where I bought my binge foods, embarrassed at the frequency of my shopping. I couldn’t concentrate at work, distracted every few minutes by an urgent need to shove something in my face. I gained 20 pounds, and had to buy all new pairs of pants.

What I was experiencing is called “cross-addiction,” and it’s a common phenomenon. Eating disorders specialist Dr. Pamela Peeke, MD, MPH, FACP, is the author of several books, including The Hunger Fix, and founder of the Peeke Performance Center for Healthy Living. She tells me that recovering alcoholics and addicts often become “transfer-addicted” to food: After years of flooding the reward centers of our brains with chemicals, we continue to seek the same kind of high elsewhere.

Unfortunately it’s usually the unhealthy, processed foods that get us hooked. “Our brains are built for different levels of rewards,” Dr. Peeke tells me. “We feel rewarded when we eat an apple when we’re hungry. That’s normal. We’re made to handle eating something like that apple; it’s a natural food. You never hear of anyone getting high or ‘doing apples’ because you’re usually satisfied after eating one or two. No one goes on to eat say, 80 apples.” No, that doesn’t sound as fun as scarfing down powdered donuts.

A bunch of recent studies suggest that some food chemicals may be even more addictive than drugs like heroin and cocaine. “Refined sugars and carbohydrates are manufactured substances that stimulate the same part of our brains that drugs and alcohol respond to,” Peeke says. “Our brains weren’t made to handle these ‘uber-rewards’.” There is some comfort in knowing that my food problem isn’t just my problem: It’s also, quite likely, America’s problem.

But people with addictive tendencies, especially those of us who have already passed that point-of-no-return with one substance or another, are particularly at risk, says Peeke. “When you take away the drugs or alcohol, the brain is missing its artificially created rewards, these ‘uber-rewards,’ so binge-eating refined sugars happens in an effort to replicate the missing high.”

And the relationship between food addiction and drug/alcohol addiction goes both ways, she adds: Sometimes obese overeaters who are treated with bariatric surgery turn to alcohol or drugs after the surgery has limited their food intake.

I finally hit a wall with food. At around a year-and-a-half sober, I began to seriously consider drinking again, just to get my eating under control. Thankfully I wasn’t the only AA-er with this problem. I confided in a sober friend who I knew attended Overeaters Anonymous meetings and she offered to take me along. As with my first AA meeting, I showed up depressed and desperate. It was brutal. I got ”abstinent”—which means abstaining from all my “trigger foods” (foods that would trigger my urge to binge). It was like getting sober all over again, but worse, because now there was nothing to fall back on. Sugar had been my salvation for the first 18 months of my sobriety—and all the way back to my childhood.

I began working with a food sponsor who was also a recovering alcoholic. Though they had seemed like unrelated problems before, I came to see that my food and alcohol addictions were cousins—different ways of acting out the same impulses. The programs complemented each other, and my AA recovery became stronger as I got help in OA. “You have to treat cross addictions together,” says Dr. Peeke, when asked whether one addiction is harder to treat than the other. If you try to treat one, and ignore the other, something is going to eventually bite you in the ass—at least, this was my experience.

For a few years, I was able to stay abstinent from my trigger foods. But then I found myself slipping away from OA, and focused solely on my AA program. Unsurprisingly, in time I fell back into compulsive overeating. At 10 years sober, I’ve had to start treating my food addiction all over again.

It’s been excruciatingly painful at times. But binge eating to cope with my feelings stunts my emotional life and sickens my body, just as drugs and alcohol once did.

This time around, I chose a non-12-step eating plan with no strict food restrictions: Weight Watchers. But I still need to deal with the “mental, physical and spiritual malady” underlying my food addiction, in a fellowship with other food addicts. So I’ve returned to OA, too. I can’t be certain I’ll “get it” this time around. But I have hope that one day I’ll be able to enjoy food without depending on it.