After Colorado and Washington, we're on the way toward national legalization. But will liberals get left behind? 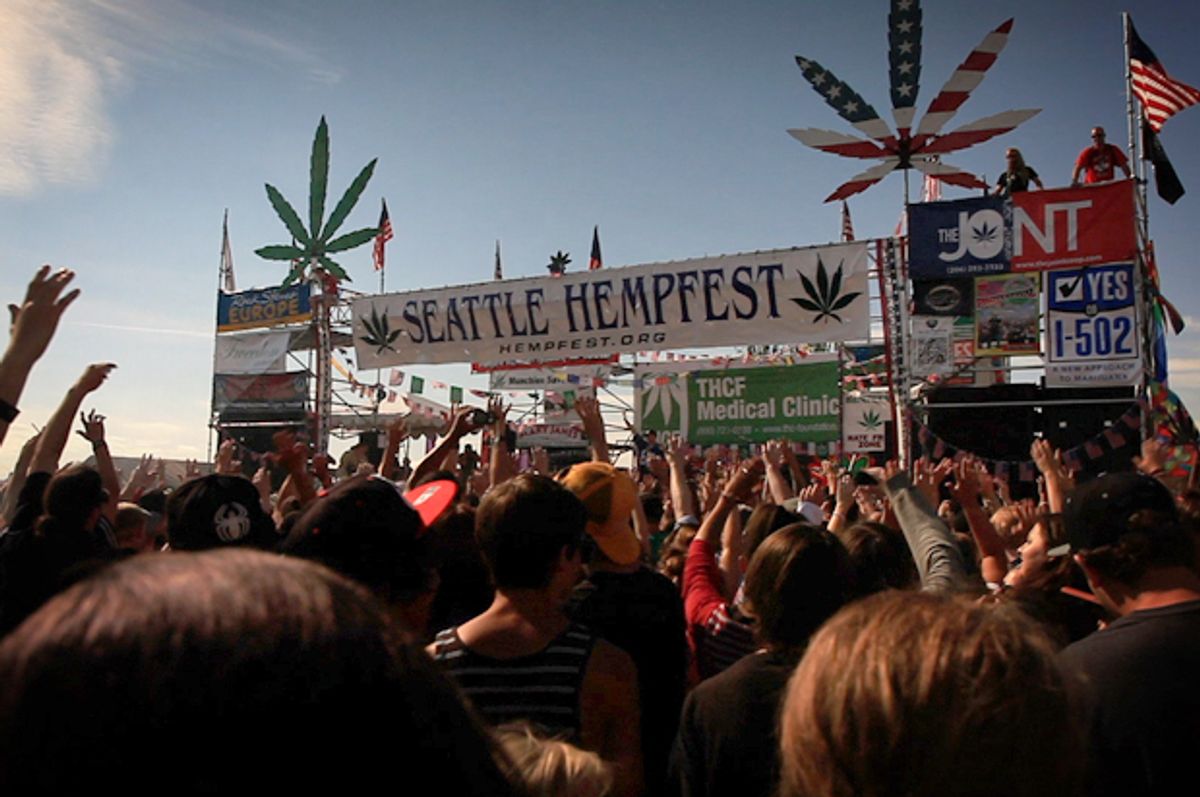 When is the perfect the enemy of the good? And is it ever OK to surrender certain rights in the name of overall social progress? Those questions don’t have easy answers, but this one might: Was Washington state’s historic marijuana legalization initiative of 2012 just a big huge sellout? It’s not a major spoiler for me to say the correct answer is no, but as folks who understand the internal politics of the pot reform movement already know, the question itself is not ludicrous. “Evergreen: The Road to Legalization” is a fairly standard blow-by-blow campaign documentary, but director Riley Morton and writer-producer Nils Cowan capture a campaign with far-reaching consequences and a peculiar inner dynamic. Washington’s Initiative 502 was constructed to win, following the defeat of legalization initiatives in other states like California and Nevada – and win it did. But to at least some longtime weed activists, it was nothing short of a right-wing power grab.

Of course some opposition to 502 came from traditional sources, including law enforcement officials, religious conservatives and just-say-no advocates (if you can still find them). But the argument that if we let people smoke weed America will be destroyed just didn’t have a lot of traction in the nation’s northwestern corner, especially since those who wanted to get high pretty much did so whenever they wanted, with few visible ill effects. Seattle voters had already effectively decriminalized pot, electing a city attorney who vowed not to prosecute possession charges and instructing the police to ignore the prohibition laws. Medical marijuana was already legal in Washington and really easy to get, at least in the liberal population center around Seattle and Tacoma. (The rural and Republican-leaning eastern two-thirds of the state were another story.)

Therein lay the problem. As with the defeated California initiative of 2010, many prominent figures in the gray-market weed world liked the system perfectly well the way it was, and saw no reason to change it. (Fearing the advent of taxation and regulation, Humboldt County’s legendary anarcho-libertarian pot industry reportedly poured millions into defeating the California bill.) There’s no evidence that Washington’s growers played a big role in the 502 battle, but a vocal group of medical-marijuana advocates and patients formed the bedrock of the opposition. They argued that this bill amounted to a bogus, severely restricted form of legalization pitched to paranoid soccer moms in suburbia (homegrown pot was banned, for instance), and that it introduced a dangerous new DWI standard that could be used to persecute weed smokers, especially people of color.

Since we know how 502 turned out – it passed overwhelmingly, with better than 55 percent of the vote – and since there has been no apparent spike in pot-motivated traffic stops, “Evergreen” may be overly focused on the granular details of a battle that will mainly interest Washingtonians and marijuana activists. But it’s still a fascinating case study in the promise and perils of ballot-box democracy, and the give-and-take nature of social progress. There’s no doubt that the anti-502 forces captured by Cowan and Morton come off as exactly the sort of sourpuss cranks who utterly fail to see the big picture and give left-wing politics a justifiably bad name. Steve Sarich, the pipe-smoking, high-waisted Bilbo Baggins type who heads the No campaign, is such a curmudgeon that his No. 2 admits she dislikes working for him and doesn’t think of him as a friend. But the fact that they were a tiny, angry fringe movement who got bulldozed by history doesn’t mean that they didn’t have a point.

It’s interesting that the Washington initiative was primarily crafted by an ACLU attorney named Alison Holcomb, because it commits the classic error of American liberalism: giving a whole bunch of new power to the state when you don’t have to. We’ll never know whether a version of 502 would have passed in Washington that permitted homegrown dope, or that did not institute a harsh new DWI law based on the most stringent possible interpretation of evidence about when a person is too stoned to drive. Initiative 502 was specifically written to attract support from centrist Democrats, from conservative African-American preachers and from steel-haired law enforcement dudes who’ve gotten sick of the utter pointlessness of the drug war. I understand why that was shrewd electoral politics, and maybe that was the only way to get this law passed by a comfortable majority. It certainly worked.

But what’s interesting about the parallel initiative passed in Colorado is that its vision of legalization was far more capacious: Modest amounts of homegrown pot are included, and no draconian new DWI standards have been invented. Now, Colorado is quite a different place from Washington: Although it has tilted Democratic in recent national elections, it’s a true purple state with a strong current of libertarianism at both ends. It’s worth noting that several of the states that seem most likely to legalize pot in the next few years, including Alaska, Arizona and Maine, fall into this category: more libertarian than liberal, more individualist than statist. In California, Massachusetts and New York, the most reliably blue states on the board – where weed is widely tolerated at creative-class parties but used as an excuse to arrest urban kids of color -- true legalization appears to be several years away or longer.

Here’s an important codicil to the story of “Evergreen”: Both political parties have been caught flat-footed by the marijuana issue, as they were by same-sex marriage – and this should remind us that neither party actually represents the people they claim to represent. Democrats were able to pivot fairly successfully on the latter issue, since they’ve offered nominal support to LGBT rights for years (while vigorously brown-nosing religious opponents of marriage equality). It’s still amusing to see President Obama gaze meaningfully into the cameras and tell us he had a change of heart on marriage (because the people changed your mind for you, dude!), and it appears that a similar moment of prayer and reflection may be at hand on the great question of the Chronic.

But we should not allow the floating clouds from Seattle and Denver to obscure the fact that Obama’s first term was absolutely dreadful on the drug war in general and pot in particular -- arguably even worse than the paramilitary buildup of the George W. Bush administration. Attorney General Eric Holder has frequently allowed federal pot laws to be used to hound and persecute medical marijuana providers in numerous states, and the administration’s abrupt about-face in the face of the new Colorado and Washington statutes – and the prospect of many other states following suit – is transparent political cowardice. Or perhaps it could better be described as obedience to a dog-whistle coming from Wall Street: At the very end of “Evergreen,” Morton and Cowan show us the arrival of venture-capital dudes with expensive suits in the Washington pot trade. Legalized marijuana, once properly tamed and harnessed, will be a multibillion-dollar business that promises to make rich people a lot richer.

If the pot issue has leading Democrats pinioned between their supposed social progressivism, their love of state power and their obeisance to the bankers, Republicans face a different three-way Hobson’s choice between their professed love of individual liberty, their poorly disguised hard-on for the police state and the fading demographic of “values voters” they can’t quite cut loose. If I were a consultant for the GOP – well, first of all, whoever hired me would get fired, tarred-and-feathered and ridden out of town on a rail. But if I had five minutes before that happened, I’d fire up a bowl with whoever, Jeb Bush and Rand Paul and Paul Ryan (though I hate it when he gets the giggles), and tell them that cheeba is their golden opportunity, their ticket back into the game. While the Democrats pull long faces and talk about regulation and social responsibility and try to walk back 40 years of hypocrisy, the Republicans have about half a second to steal this issue out from under them, to become the Ganja Ol’ (Dirty Bastard) Party, the party of “Legalize It” and “Purple Swag” and “Pass the Dutchie.” They wouldn’t listen, of course. But we might get some actual politics back if they did.

”Evergreen: The Road to Legalization” opens this week at Cinema Village in New York; June 20 at the SIE Film Center in Denver, June 26 at the Hollywood Theater in Dormont, Pa., and June 27 at the SIFF Cinema in Seattle, with more cities and home video to follow.