President Obama: "Our levels of gun violence are off the charts"

Today the president sat down for a Q&A with Tumblr on education, student loans and gun control 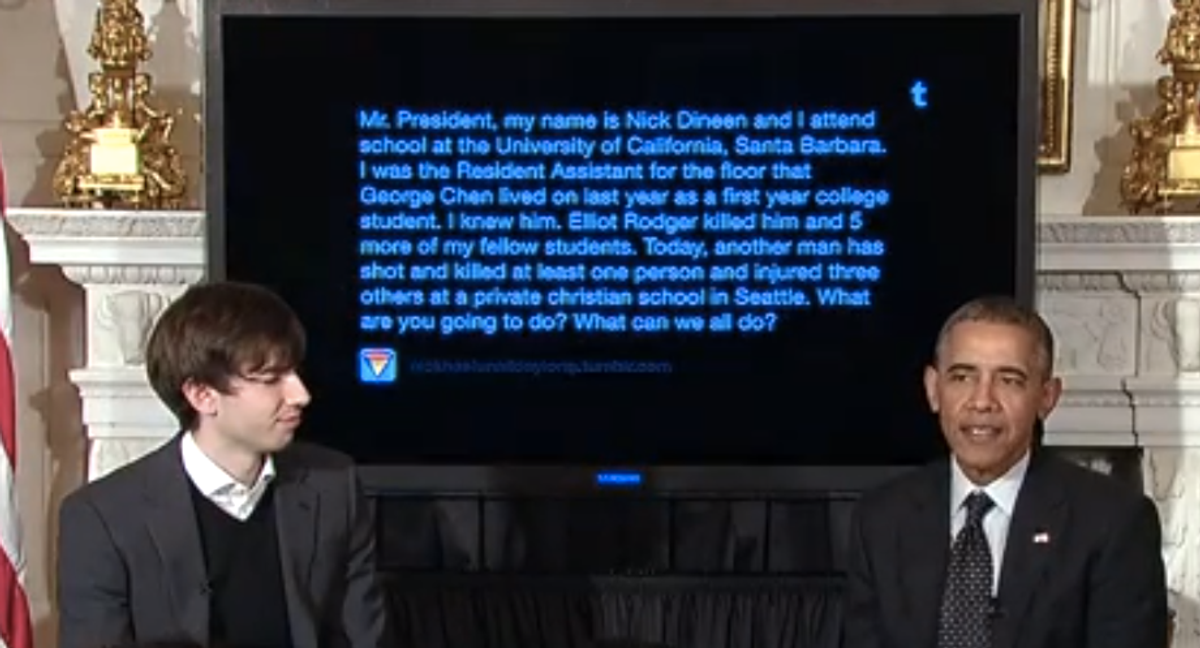 This evening President Obama sat down with the social media site Tumblr's founder, David Karp, for a question and answer session. The live-streamed interview took questions from Tumblr users about student loans, education and gun control. The president is no stranger to reaching out to tech-savvy young adults: He's even hosted a Reddit AMA and answered questions on Quora.

This was his first appearance on Tumblr (and the first time that David Karp had spoken to a president). President Obama answered tough questions about STEM (science, technology, engineering, math) education, student loans, crushing debt and even took a stab at philosophical questions about following your dreams.

Then he was met with a question about a different threat to education: guns. Just this morning there was a school shooting outside of Portland, Oregon; last Thursday a student was killed in Seattle; and over Memorial Day weekend there was the tragedy in Isla Vista, California.

A student at University of California, Santa Barbara, who knew one of Elliot Rodger's victims, wrote in asking what President Obama could do to prevent these tragedies. The president gave an impassioned response.

"My biggest frustration [as president], so far, is the fact that this society has not been willing to take some basic steps to keep guns out of the hands of people who can do just unbelievable damage. We're the only developed country on earth where this happens, and it happens now once a week. And it's a one day story. There's no place like this."

President Obama said that Congress on both sides of the aisle is "terrified of the NRA" and other gun advocates. “If public opinion does not demand change in Congress, it will not change,” he said. Obama also mentioned how affected he was watching a grief-stricken Richard Martinez, the father of one of the students who was shot in Isla Vista, speak at a press conference about his son. And he brought up his shock at the Newtown massacre.

"The fact that 20 6-year-olds were gunned down in the most violent way possible ... was stunning to me," the president said.

"The U.S. does not have a monopoly on crazy people. It's not the only country with psychosis," Obama said in regards to mental health and guns. "Yet we kill each other in these mass shootings at rates that are exponentially higher than any place else."

On other topics, including STEM education versus the humanities, President Obama clarified his stance. "I'm putting a big emphasis on STEM because there's a shortage," and not because they're more privileged. He said that too few kids are encouraged to go into math and science fields, and that we especially must work to encourage young women to pursue STEM.

President Obama also promoted Sen. Warren's upcoming bill on student loan refinancing, and urged students to call their senators to find out their stance on the bill.

The entire interview can be watched below or here: