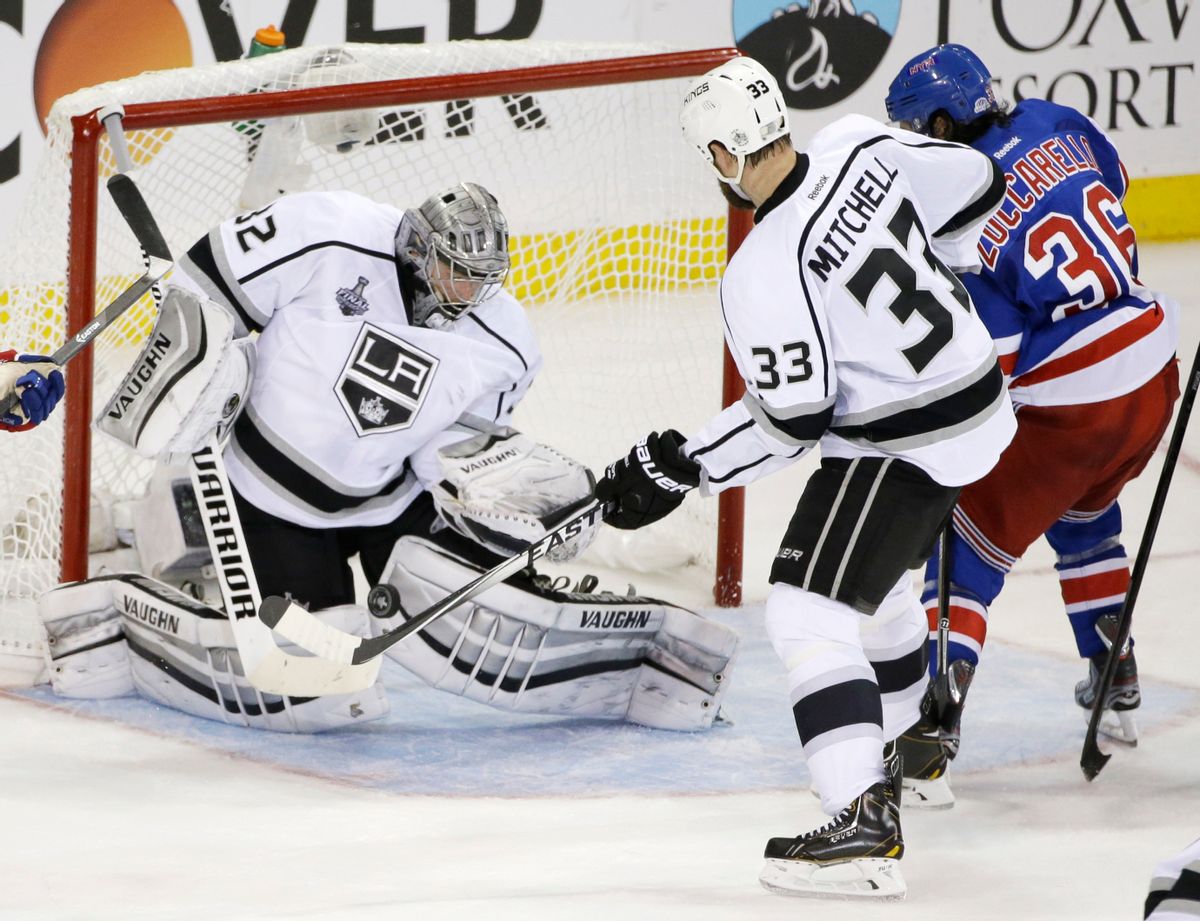 NEW YORK (AP) — Jonathan Quick and the Los Angeles Kings are close to finishing off the New York Rangers in a big hurry.

The All-Star goalie had his best game of the finals by far, making 32 saves to put the Kings on the cusp of another coronation with a 3-0 victory over New York in Game 3 on Monday night.

Los Angeles escaped with two overtime wins at home and then took complete command inside Madison Square Garden to take a 3-0 series edge. The Kings are a win away from winning their second Stanley Cup in three years.

The Kings took their first lead of the series on Jeff Carter's goal in the final second of the first period and then stretched the edge to three goals in the second — something the Rangers failed to do in California.

"We got to make sure that's our best game, the fourth one is always the toughest to win," Quick said.

While there has been only one comeback from a 3-0 hole in the finals, the Kings erased such a deficit in the first round against San Jose.

Defenseman Jake Muzzin scored a power-play goal in the second period, and Mike Richards pushed the lead to three with a goal off a 2-on-1 in the middle frame.

Henrik Lundqvist was hardly at fault on the goals, and finished with 12 saves.

But Quick was perfect.

The Connecticut native, who grew up a fan of the Rangers and 1994 Stanley Cup-winning goalie Mike Richter, made a brilliant save with his stick blade to deny Derick Brassard with 8:40 left in the second shortly after a Rangers power play. That stop came on the heels of Brassard having two chances during the advantage off a rebound of Brad Richards' shot. Brassard's first attempt was blocked, and the second was stopped by Quick.

The Kings goalie was also on his toes just 8 seconds into the third period when Chris Kreider came in alone but was stopped in tight.

That eliminated the little hope the sold-out, towel-waving crowd had of a big comeback.

"You make one save, and you're trying to make the next one and go from there," Quick said. "They got a great team so you're not trying to take anything for granted while it's going on. You're just trying to make one save at a time. The team played great in front of me cleared out a lot of rebounds that I left in front."

Los Angeles took its first in-game lead in the series when Carter scored with 10th of the playoffs on Los Angeles' fifth shot. Carter came in and snapped a hard drive that clipped the skate of diving defenseman Dan Girardi in front of Lundqvist and caromed inside the right post with 0.7 seconds on the clock.

The red and green lights behind Lundqvist both flashed at the same time while the Kings celebrated. At no point did Los Angeles hold the lead at home in the first two games until they ended each contest with an overtime goal.

The quick pace played into the Rangers' preferred style, but New York managed only four shots in the period. The Rangers led 2-0 in each of the first two games but couldn't hold on. They nearly took the lead again when Mats Zuccarello faced an empty net at the left post with 7:24 remaining, yet he was stopped by Quick's lunging stick.

Playing with the lead didn't work for New York in LA. The Rangers' early 2-0 lead in the series opener became a 3-2 loss when Justin Williams scored in overtime. They held three two-goal leads in Game 2, only to be thwarted when Kings captain Dustin Brown won it in double overtime on Saturday.

Quick had plenty of support in front of him to post his second shutout in these playoffs and ninth overall in the postseason.

Muzzin made it 2-0 at 4:17 of the second after former Rangers forward Marian Gaborik and Anze Kopitar worked the puck up the right wing wall to Muzzin at the point for a shot that struck New York's Martin St. Louis and found its way past Lundqvist.

Richards finished a 2-on-1 with Trevor Lewis when his attempted pass across bounced back to him off defenseman Ryan McDonagh and was put it with 2:46 left in the second.

NOTES: Gaborik played his first game at the Garden since being traded by the Rangers in 2013. ... The Kings earned their first playoff win at MSG. ... The Rangers were 0 for 6 on the power play, making 3 for 44 in the playoffs at home. Los Angeles went 1 for 4.