What cancer as entertainment gets right -- and horribly wrong

"The Fault in Our Stars" gets what "Chasing Life" doesn't 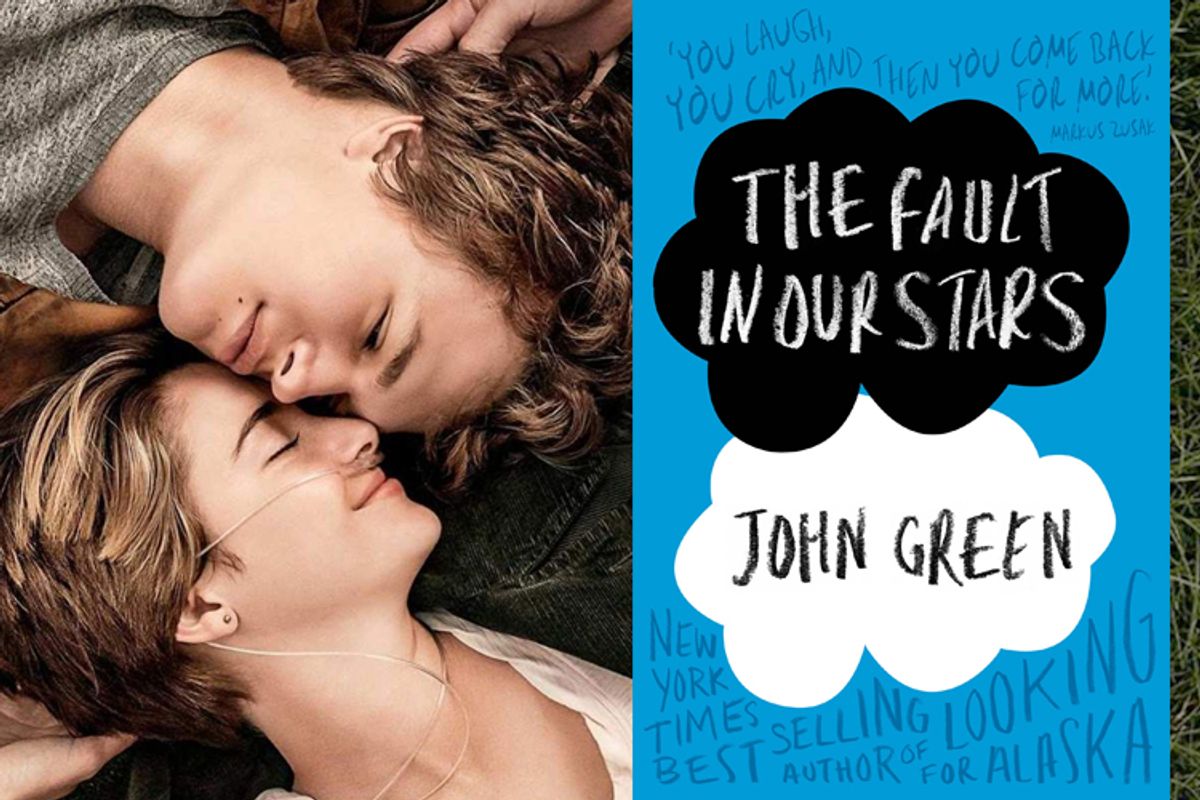 In case the promos from ABC Family have somehow not be deluging your social media feed as they have mine, let this serve as your notice that on Tuesday evening, "Chasing Life," a new series about a young woman with everything to live for (Is there any other kind allowed on family channels?) who learns she has leukemia, premieres. The show may yet prove to be great – the Los Angeles Times backhandedly enthuses that "when it's not being completely ridiculous, 'Chasing Life' is very good." But I can already tell you that the promotional campaign for it is everything that's enraging to so many of us who've experienced cancer firsthand.

Let's start with show's arresting ad image – the beautiful journalist April (Italia Ricci), clad in a sexy black dress and perched seductively on an open casket filled with lemons. Because you know the old saying: When life hands you cancer, make lemonade. Then there are the show's tag lines. There's "Cancer sucks," which I am the last to dispute, and the somewhat less truthful "Giving up is not an option." Gosh, thanks, because if people with cancer only knew they had options, I'll bet more of them would pick the not giving up one. The trailer features wisdom like, "When it chooses you, you fight – what other choice do you have?" and April declaring, "I want to win." Another promo says, I kid you not, "Live like there's no tomorrow, and never say die." Hey, bite me.

"Chasing Life" is based on the successful Mexican series "Terminales," and if the American reimagining of it holds true to the original, there will be plenty of darkness and mortality facing in the episodes to come. But actress Ricci admits that "I’ve never personally had an intimate experience with cancer. I mean, there have been scares in the family but they’ve always worked out in our favor and never ended up being very serious," and that apparent disconnect from the real experience of cancer certainly seems to permeate the branding of the show as well.

Let me never argue that cancer – particularly the "This is probably going to kill you" kind – is not very dramatic. That's why I would never contradict its merit as artistic inspiration. It can be depicted quite beautifully and meaningfully – which is undoubtedly why "The Fault in Our Stars" was a blockbuster book and now has become a blockbuster movie. Writing this week in Time, cancer survivor and all around incredibly eloquent person Ilana Horn praises "The Fault in Our Stars," noting, "Art may merely be a representation of reality, but if it deepens our humanity, then it has done its job." I felt that profound power of art as I watched the film this past weekend with my 14-year-old daughter, laughing together at its dry observational commentary on the humbling absurdity of disease, clutching our hands together at the pivotal moments – and bawling our eyes out a lot. It's a story without easy or comforting resolutions, a tale in which the most laughable character is the support group facilitator who inexhaustibly tries to bright-side what is an undeniably cruel and crappy situation.

In her Time piece, Horn asks, "The make-or-break question for me as a former patient comes down to one thing: is cancer simply a storytelling device — shorthand for eliciting sympathy and turning up the heat on the issues in a character’s life — or do the filmmakers take it seriously as a situation to explore?" Watching "Chasing Life's" April in a montage of all the conventional livin' to the fullest activities – driving, laughing, hugging, crying, wearing pretty dresses – I have my doubts about this one. As one cursed with a relentlessly optimistic disposition myself, I can assure you that I approve of hope and cheer and trying and all that. But I have my doubts because I also know firsthand that the rioting cells in your body don't have a big investment in your attitude.

Several months ago I read an interview with Kris Carr, the cancer guru who has carved out a devoted following with her brand of shiny positivity. In it she said, "Ten years ago the fearful side of myself might have said I wouldn't be here, because when I was diagnosed with a Stage 4 cancer I was told that I had only 10 years to live. But then there was a side of myself, the fighting side of myself, the loving side of myself, that decided to reject that information and to get busy living." And it made me really, really angry, because implied in that sentiment was the message that cancer is something to be accepted or rejected. Cancer strikes people who are healthy. It strikes little children. It hits cheerful people and depressed people and if you can maintain a sense of humor you will have a somewhat less traumatic experience but it will not cure you. It won't. Sorry. And a lot of days, you'll find your sense of humor has fled too.

I've achieved many things in my life that I'm proud of -- including, you bet, showing up for two years of treatments in a Phase I clinical trial and enduring everything that went with it. But not dying of cancer isn't mine to claim. That one belongs to my doctors, and to science. That's why I want you to read what I'm about to say and I want you to understand it. People who live through cancer are not morally superior to people who die of it. They are not better. They are not stronger. If strength of character were the remedy for disease, I'd have died a long time ago. And my alarmingly long list of friends – amazing, funny, feisty individuals, all -- who have died of cancer would instead be empty.

There is a great line in "The Fault in Our Stars" that mocks "the conventions of the genre," while "Chasing Life" instead seems to run headlong into them. And you can say it's just a TV show and who cares, but you really can do "the genre" and do it meaningfully. But when you perpetuate the notion that cancer is some big life-affirming adventure, it's actually hurtful. And when people frame disease in terms of options and rejections, that's ignorant. Like everyone else who has had serious cancer, I did not choose whether it would kill me or let me live. But I can choose the stories I watch and share with my family, and in this case, the decision is pretty clear. Because if there's one thing all these cancer dramas have taught me, it's that life's too short to waste.

Abc Family Cancer Chasing Life The Fault In Our Stars