The National Review's insane math: "Be not afraid" of global warming disaster 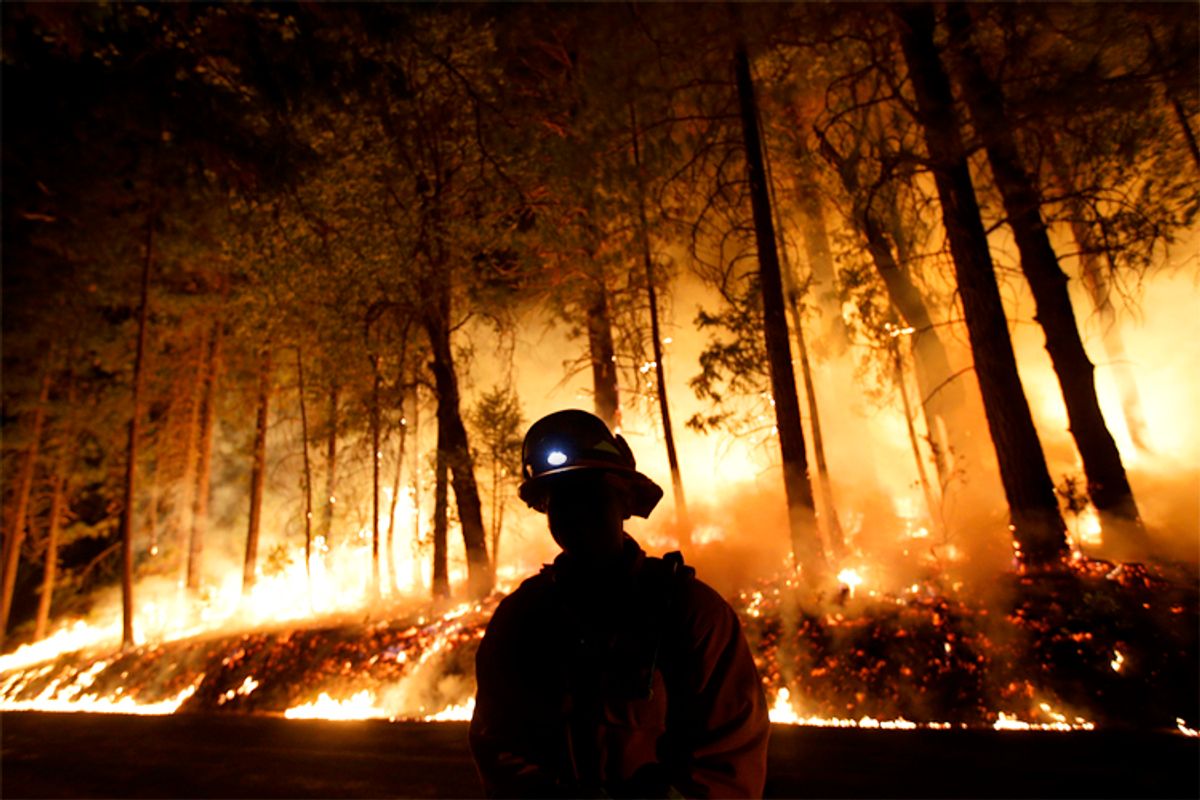 Ezra Klein's pessimistic assessment of the current state of climate mitigation ("I think we're fucked. Or, at the least, I think our grandchildren are fucked") may be the most alarming thing published about our struggle to mitigate the Earth's rising temperatures since researchers announced last month that the West Antarctic ice sheet had entered a phase of irreversible collapse.

A constructive response to such defeatism is to discuss the options that remain open to us while emphasizing the importance of continuing to do everything in our power to protect our collective interests, as many, including Joe Romm at ThinkProgress and Brenton Mock at Grist have done, and done well. The wrong response is to do what columnist Jim Manzi suggests in the National Review: "Be Not Afraid," he writes. And definitely don't impose regulations, because the impact of climate change isn't going to be that bad.

In Manzi's view, it all boils down to a cost-benefit analysis. And most "fair-minded" studies, he writes -- citing one from the Cato Institute, a libertarian think tank -- "show that various global carbon-rationing proposals that would reduce economic growth rates in return for lower emissions ... have real-world costs in excess of expected benefits."

Manzi has a much larger argument to make, about how the only climate intervention the government is justified to make is to subsidize new technologies (as in fracking, not renewables), and how such innovations will be enough to slow warming. But his attempt to downplay the potential impact of climate change is worth calling out on its own. It's a dangerously narrow way of addressing the problem, one that ignores the real human impact of climate change.

Nearly every government in the world has agreed that 2 degrees Celsius makes sense as a reasonable amount of warming we can probably get away with. However, Manzi writes, "The basic premise that disaster follows once global warming hits a 2C threshold is unsupported." It's true that 2 degrees is more of a handy benchmark than a definitive tipping point, as Klein himself acknowledges. The consensus is still out on when and how global warming might tip over into a catastrophe -- and even on just how catastrophic it might get. However, we do know, per the American Association for the Advancement of Science, that Earth is at a growing risk of “abrupt, unpredictable and potentially irreversible changes” due to climate change.

Some would call that a disaster. If, like Manzi, you look only at GDP, you may decide that's not so bad.

One problem with such an approach is that we really don't know what the economic impact of climate change will be. Manzi cites the Intergovernmental Panel on Climate Changes's Fifth Assessment Report, which finds that “global annual economic losses for additional temperature increases of ≈2C are between 0.2 and 2.0% of income." That conclusion, however, is arrived at tentatively -- in the very next line of the report, its authors err on the side of caution: "Losses are more likely than not to be greater, rather than smaller, than this range," they write. (Emphasis added.)

The data available for the IPCC's economic analysis was thin. Zoom in from global GDP to individual countries and communities, and we know even less about the potential economic impact of climate change. Writing in the Atlantic, Diana Liverman, of the University of Arizona, and MIT's Amy Glasmeir bemoaned this fact:

The report says relatively little about the impacts on sectors that now drive economic development and are the major sources of employment: the chemical, textile, electronics, and automobile industries; retail, health services, and real estate.

Most of the data that is available, they add, comes from industry-funded research: Businesses need to forecast losses and prepare for the ways climate change can impact their supply chains, so it makes sense that they're the ones paying close attention -- and they're definitely concerned about the way climate factors may harm production.

But even the more pessimistic predictions about the economic costs don't concern Manzi much: He cites estimates for greater degrees of warming that find a decline in global GDP of around 3.6 percent, and uses that as an example of the worst that could happen.

To broaden our understanding of worst-case scenarios, it's worth taking a look at the National Climate Assessment, which has a number of suggestions. They include crushing heat waves, devastating droughts and increasingly intense storms, along with the increased water demand, flooding, spread of disease and loss of food security that can result, to name just a few examples.

To be sure, not every effect of climate change will be "bad," and some may even help local economies. Vermont, for example, just released its own state-specific climate assessment showing that climate change -- by bringing heavier winter snows and a longer growing season -- could be a boon to the skiing industry and agricultural sector. The tradeoff, however, is "a risk of more frequent catastrophic flooding." Citing the damage caused by Tropical Storm Irene, the report's authors add that such flooding will disproportionately affect the state's poorest residents -- 1 to 2 feet of floodwater is all it takes to wipe out the mobile home parks that proliferate in floodplains.

A few percent of GDP is a big deal, and money isn’t everything," Manzi writes, "but this is hardly what I would mean in normal speech as 'the world burning.'" It makes sense that he'd be deluded into thinking that, considering that he probably doesn't live in a mobile home (or, I'm assuming, in a coastal community, or in the drought-stricken West). It makes sense, also, considering where he exists on this map: Move outside of the developed world, and the cost-benefit analysis of climate-change mitigation leans much more heavily on the side of "benefit." The sad irony, as Klein, along with colleagues Zach Beauchamp and Matt Yglesias, points out, is that the countries most vulnerable to climate change -- due to both geographical location (extreme weather caused by climate change will be felt most intensely near the equator) and lack of resources -- are the ones that have contributed the least to the problem. If the map has one shortcoming, as Romm points out, it's that it underestimates the danger posed to wealthier nations (see, again, the National Climate Assessment, or look at the impact of recent superstorms, and then try to argue that America doesn't have a lot to lose).

The global fight to mitigate the global impacts of climate change is now all about weighing the risks and deciding just how far we can go to mitigate them. But a true cost-benefit analysis needs to take into account the full story, which goes far beyond a small loss of income. To look only at that one, imprecise figure, and to use it to suggest that the costs of climate change are minimal to nonexistent, is nothing more than a nicer way of telling everyone at risk -- which is to say, most people on Earth -- that they can all go to hell.