It seems impossible to be anti-enfranchisement in the 21st century, but sexists like Ann Coulter prove otherwise 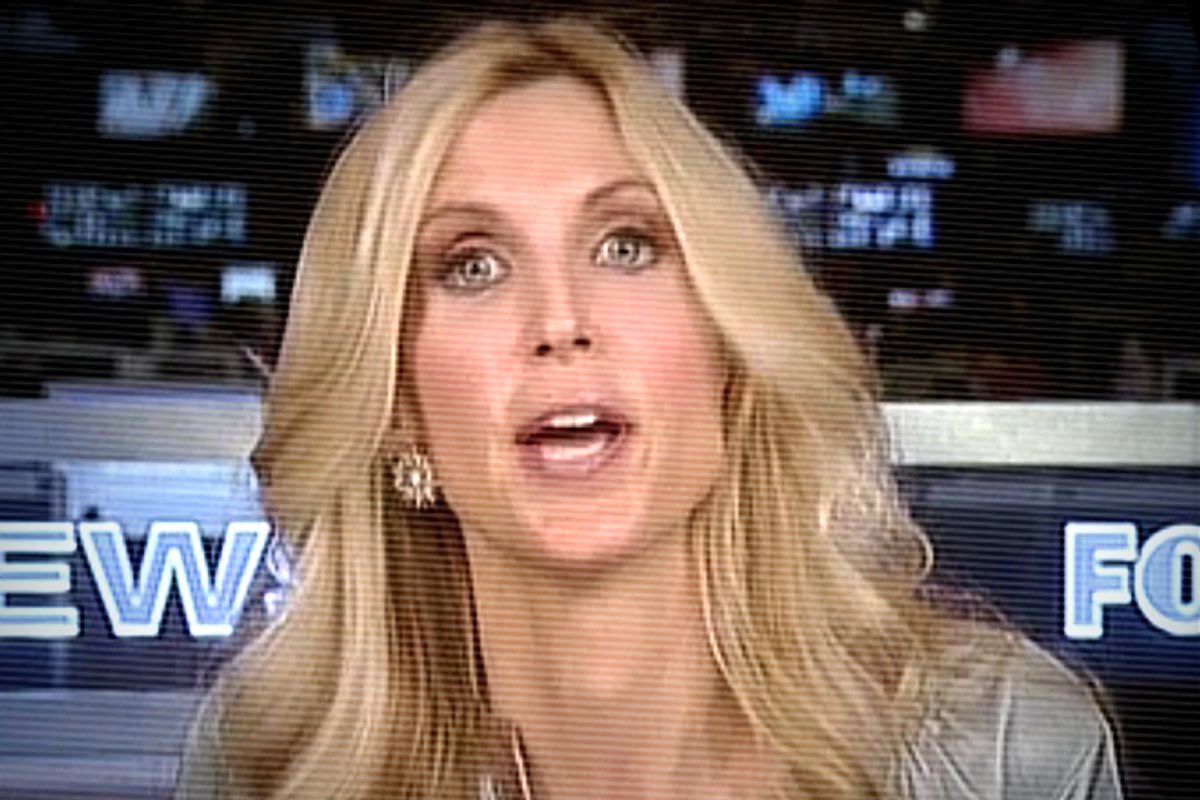 Misogynists say the darndest things. Take, for example, the claim, verbatim, that "women's suffrage destroyed western civilization." It sounds like something Stephen Colbert would say, but it's something a real live blogger and YouTube sensation actually wrote... on the Internet... on purpose... in the 21st century.

1. Women's suffrage: Responsible for the evil that is Cam and Mitchell, the gay parents on "Modern Family."

Earlier this month, David Barton explained the origins of women’s disenfranchisement in the United States. Now, Barton isn’t just the founder of WallBuilders, an organization whose mission is "educating the nation concerning the Godly foundation of our country." Barton also fancies himself a historian and has not only a Bachelor of Arts degree from Oral Roberts University but an Honorary Doctorate of Letters from Pensacola Christian College. Barton is responsible for… discovering the (non-existent) causal correlation between banning school prayer and an increased rates of crime and alcoholism. So, we must take his historical analysis seriously. And his analysis reveals that our Founding Fathers' decision to deny women the vote in the Constitution had nothing to do with bigotry and everything to do with... you guessed it... god!

As Barton explains: “The bigotry we're told they held back then, they didn't hold.” Bigotry? What bigotry? Certainly no bigotry was coming from the framers of the Constitution, committed as they were to justice, equality, and turning black people into fractions. No. These slave-holding men weren’t anti-anyone. They were just pro-family: “And what they did was they put the family unit higher than the government unit and they tried to work hard to keep the family together.” Just as removing prayer from public school (and, you know, recognizing that whole separation of church and state thing) took away our livers and lives, bestowing women with the vote has ruined the family: “And, as we can show in two or three hundred studies since then, the more you weaken the family, the more it hurts the entire culture and society.”

Barton is that rare breed of historian who is so talented and expert he doesn’t need to look at history or provide evidence. Though he does provide some data: “We've moved into more of a family anarchy kind of thing, the 'Modern Family' kind of portrayal.” You want evidence? Turn on ABC every Wednesday at 9pm.

Feminists will be thrilled to learn that women are just as capable of sexism as men. Take Janis Lane, a Central Mississippi Tea Party president, who rues the day the vote was granted to… well… her: “Our country might have been better off if it was still just men voting.” Why would our country benefit from the disenfranchisement of women? Because of the devil.

“There is nothing worse than a bunch of mean, hateful women. They are diabolical in how they can skewer a person.” These females are not to be trusted: “The whole time I worked, I'd much rather have a male boss than a female boss. Double-minded, you never can trust them.” And if you can’t trust a female boss, how can you trust a female politician? Surely, women should be excluded from the entire political system, right? Well, not exactly. Lane has an explanation for her simultaneous participation in politics and contempt from women in politics: “Because women have the right to vote, I am active, because I want to make sure there is some sanity for women in the political world. It is up to the Christian rednecks and patriots to stand up for our country. Everyone has the right to vote now that's 18 or over (who is) a legal citizen, and every person that's 18 and over and a legal citizen should be active in local politics so they can make a change locally, make a change on the state level and make a change in Washington, D.C.”

In other words, though it is lamentable that women have political rights, because they do, Lane will do her best to fight for a world in which, one day, they won’t.

3. I have a dream! That one day this nation will rise up and repeal voting rights for women.

One of the best thinkers/bigots of the right is John Derbyshire, who got fired from the National Review for his racist guide on how to keep yourself safe from black people. You know you’re despicable when the National Review cans you for what it describes as "outlandish, nasty and indefensible" writing. Because he likes to state the obvious, Derbyshire has described himself as a homophobe and a racist. But he is being humble by omitting his sexist bona fides. For example, the homophobic, racist, sexist triple threat waxed poetic about his dreams and hopes for disenfranchisement during an interview with Alan Colmes: “Among the hopes that I do not realistically nurse is the hope that female suffrage will be repealed. But I’ll say this—if it were to be, I wouldn’t lose a minute’s sleep.”

Sometimes conservatives say something so inane, so obviously based on emotion and not reality, I find it hard to believe it’s not a liberal plant pretending to be conservative to discredit the movement. But, no, Ramzpaul was being serious when he wrote his blog post “How Female Suffrage Destroyed Western Civilization.” Ramzpaul, aka Paul Ray Ramsey, is a YouTube sensation, whose wit is evident in his website’s motto: “ram this.” The Southern Poverty Law Center writes, “with a small camera and a big grin, the lanky, bespectacled, 50-year-old father of two from suburban Tulsa, Okla., has emerged as the hottest right-wing video blogger this side of former Klansman David Duke.”

The particular blog post and video denouncing female suffrage was sparked by Google’s outrageous decision to honor the 90th anniversary of the 19th amendment, by posting the following radical tag on its website: “Celebrating 90 years since the ratification of the 19th Amendment, guaranteeing women the right to vote.” An incensed Ramzpaul wrote “people opposed to female suffrage proved to be right beyond their wildest predictions. As Google was celebrating the 19th amendment, a British newspaper detailed the boasting of a 26-year-old woman who claims to have had sex with 5,000 different men. Single mothers, rampant divorce, abortion and falling birth rates are part of the cancer that is destroying what is left of Western Civilization. But very few people (even conservatives) fail to realize that the inception of this cancer can be found in the passage of the 19th amendment.”

He must be schooled in the same historical methods as David Barton.

5. Rights for women is wrong for Republicans.

Ann Coulter is a glass-ceiling-shattering sexist. During an interview, Coulter opined, “If we took away women's right to vote, we'd never have to worry about another Democrat president. It's kind of a pipe dream, it's a personal fantasy of mine, but I don't think it's going to happen. And it is a good way of making the point that women are voting so stupidly, at least single women.”

It’s not just that Coulter opposes women voting because she opposes the party they tend to vote into office. It’s because to this self-loathing lady, women are just embarrassing: “It is kind of embarrassing, the Democratic Party ought to be hanging its head in shame, that it has so much difficulty getting men to vote for it. I mean, you do see it's the party of women and 'We'll pay for healthcare and tuition and daycare—and here, what else can we give you, soccer moms?'”

By the way Ann, thanks for proving the point by showing and telling that the right is indeed launching a war on women and the Democrats are, more or less, on women’s sides. That’s something the right tries to deny. So, I appreciate your honesty. How does your foot taste? Probably metallic, because you keep shooting yourself there.

If voter ID laws are intended to disenfranchise people of color and poor people, and they obviously are, then Texas should be very proud of itself. The Voter ID laws passed in Texas were racist enough to be initially struck down by a federal panel for violating the Voting Rights Act. As the judges explained, this particular ID law “imposes strict, unforgiving burdens on the poor” and that “a disproportionately high percentage of African Americans and Hispanics in Texas live in poverty.” But then, thanks to the Supreme Court’s decision that racism is over and key provisions of the Voting Rights Act were unnecessary, Texas was able to pass the racist law in a totally legal way. People who try to vote without one of the six forms of valid ID will be turned away on the spot. What counts as a valid ID? If you’re a gun enthusiast, you’re in luck. Whip out a gun permit and you’re in. But if you’re a non-gun-owning senior or student, neither a social security nor student ID card counts. But those without acceptable IDs should, of course, feel free to travel and often pay in order to obtain an ID and exercise their constitutional vote.

Texas is just as happy to deny women their rights as it is people of color and poorer people. And if you are a woman and/or poor or of color, you are really in for a treat. Because Texas also requires that a voter ID be “substantially similar” to their name on the voter registration rolls. As Ari Berman points out, a study by the Brennan Center for Justice found that a third of all women have citizenship documents that don’t match their current legal name. So, if you have changed or hyphenated your last name, ladies, it’s a problem.