Yes, Eric Cantor's campaign had way more money than David Brat's. Let's not draw the wrong conclusion from that 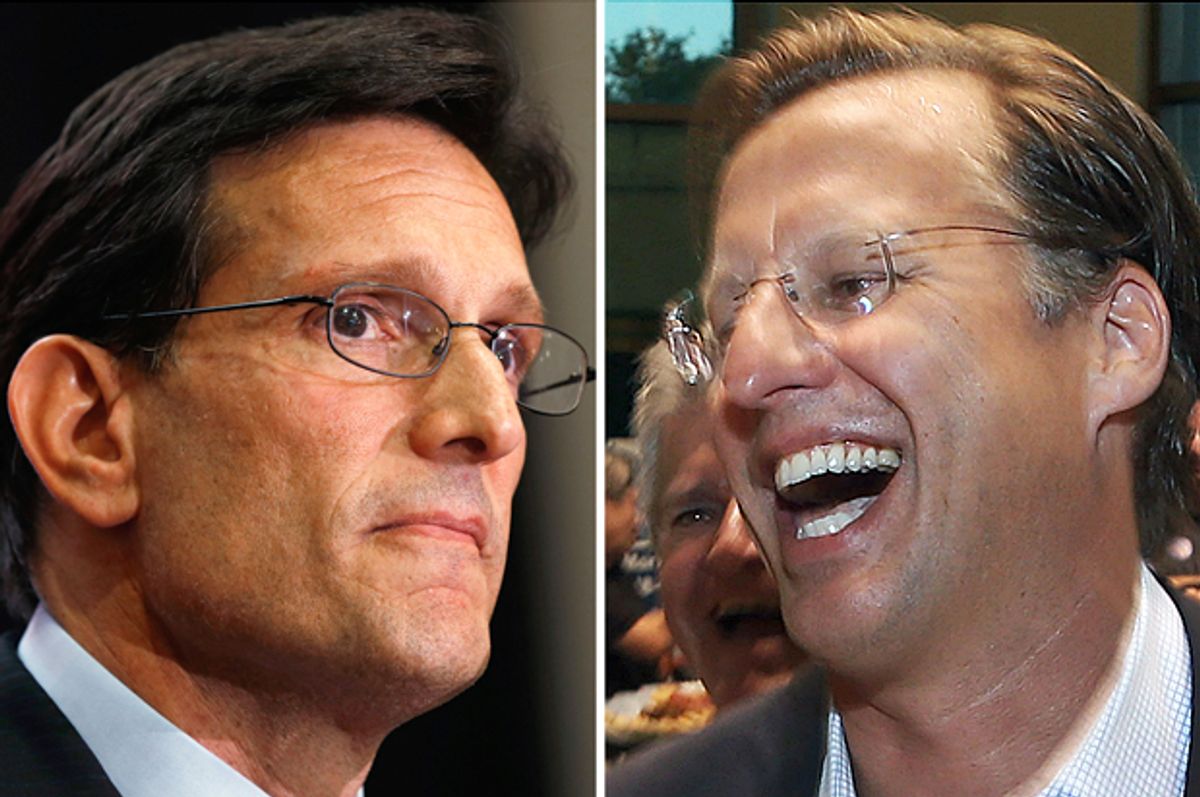 One of the more irresistible memes floating around the media following House Majority Leader Eric Cantor's primary defeat has been about steak. Up until May 21, according to campaign disclosures, the Cantor campaign had spent $168,637 at two flashy Washington steakhouses, whereas David Brat's campaign had only spent $122,793 total.

Good heavens! It plays perfectly with the narrative that Cantor, in his relentless pursuit for power, had grown out of touch with The People. Poor David Brat, America's next top populist, was getting by on a shoestring budget with only a couple of staffers. Meanwhile, the dozens of insider fat cats on the Eric Cantor campaign were gorging themselves with thick, marbly steaks several times per day, chuckling about the plight of the common man as fatty blood juice dripped down their chins, only to be wiped away by the C-notes they were using as napkins.

It's a cute anecdote, but it's also silly. Cantor's team hadn't grown accustomed to the finer things so much as the high-dollar donors it was courting had. They like perks, such as over-the-top fancy dinners, but in return, they'll cut big checks. "Overall," as Politico's Byron Tau writes, "Cantor’s campaign raked in nearly $5.5 million in the 2014 cycle, and his leadership PAC took in another $3.5 million in the same time period." That's an extraordinary amount of money for a House member to raise. Perhaps the steak dinners offered a good return for the campaign.

In Cantor's case, though, the large reserves still couldn't save his hide. Which augurs the development of an even more pernicious meme: Money in politics no longer matters! Because this one penniless guy in one congressional district upset a broadly despised member of the House leadership, well, campaign finance reformers, and those generally concerned about the flood of money gushing into campaigns, better hang it up now. They're embarrassing themselves now with this persistence that having gobs of money can be advantageous in a political campaign.

As ProPublica's Scott Klein joked on Twitter, "Eric Cantor starting his second career as the 'to be sure' anecdote in every campaign finance story for the next two years." Anecdote to some, all the justification one needs to others. Indeed, whenever John Roberts' Supreme Court gets around to gutting the cap on individual campaign contributions, Roberts will likely write, "But Eric Cantor lost and he had lotsa money!" in the majority opinion.

Well, this writer is going to "go there" and suggest that having a lot of money is still generally good for a campaign. Money, for one, most directly translates to exposure. David Brat was fortunate in a lot of ways -- he was running against an unpopular member of the Republican leadership, for starters -- but one of those ways is that he got a lot of free exposure. Laura Ingraham, Glenn Beck, Mark Levin, Ann Coulter and other popular right-wing media figures took up his cause in a proxy fight against the leadership and didn't even charge him for the favor. Not every underfunded candidate is so lucky. Most of them just lose and no one notices.

Running through the list of all the deep-pocketed, corporate-cash-soaked candidates who've been able to fend off challengers this year would mean running through most of the political campaigns this year and forever. Let's just look at a couple cases of primaries in which money "worked." South Carolina Sen. Lindsey Graham was supposed to be the gem in the Tea Party crown this cycle. He quickly put together a $13 million war chest, scared away potentially strong rivals, and crushed the no-names who remained. Sen. Mitch McConnell, a perhaps even more despised member of the Senate Republican leadership, was also a hot Tea Party target this year. And then he dumped over $10 million on challenger Matt Bevin's head. It worked.

Money is beneficial in politics, and it's still way too easy for a handful of megamillionaires or billionaires to individually sway elections. And the people who spent a lot on fancy steak dinners in order to bring in a lot more typically prevail. Let's hope that Cantor's defeat does merely become campaign finance journalists' go-to "to be sure..." anecdote in the future and not a pathetic justification for those who wish to see campaign finance laws weakened even further.