Ronan Farrow is a bust: Why his strange MSNBC show is so different from what anyone expected

Ronan seemed tailor-made for TV. Now he's a case study in how hard it can be to package idealism on cable news 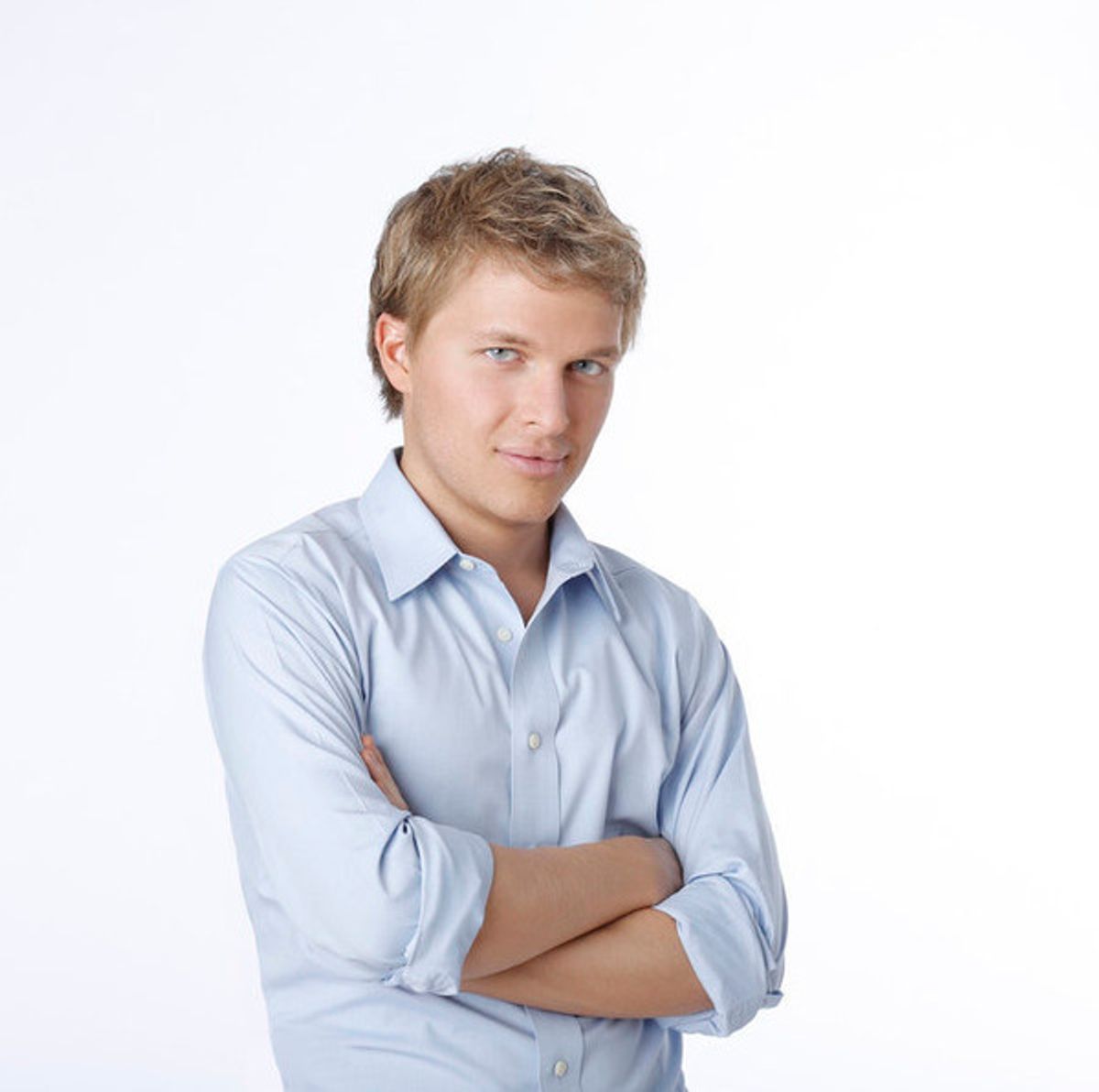 Viewers tuning in to a recent edition of MSNBC’s “Ronan Farrow Daily” were confronted with a vision of the surreal: the host mixing it up with a dolphin handler, nattering mammal in tow. “Right now I’m working with this amazing dolphin right here,” said the guest, conservationist Jeff Corwin. “This is Roxy, 24 years old. And what we are looking at is the pinnacle predator. This is the ultimate expression of nature —” The remainder of his comment was partially obscured by the sounds emanating from the talky fish by his side.

When “Ronan Farrow Daily” premiered in February, its star seemed tailor-made for TV. Jointly standing astride D.C. and Hollywood, with his unearthly poise and his impossibly symmetrical face, Farrow had long been Washington’s buzziest golden boy — friend to celebrities and slinger of gemlike Twitter quips. (“Listen, we’re all possibly Frank Sinatra’s son,” he notably cracked after his mother gave an interview suggesting that the singer might be Farrow’s real father.)

He was a guy with impossible credentials — Rhodes scholar, attorney, former Obama administration foreign-affairs official and diplomat — who might bring the tradition of MSNBC’s prime time, à la Maddow, Chris Hayes, Ezra Klein and Lawrence O’Donnell, to its daytime schedule. The lineup needed it, as hosts like Martin Bashir or Melissa Harris-Perry had offended the sensibilities of the digisphere with remarks about, respectively, Sarah Palin and Mitt Romney’s adopted African-American grandson.

And he looked like a clear pipeline to what many networks regard as a burgeoning demographic: millennials who actively want to change the world around them. Two new cable outlets – with intriguing names like Pivot and Fusion – had been launched last year with the express purpose of courting the viewership (and discretionary income) of this particular group. So as the weeks ticked closer to the February debut of his show, a fawning piece on Farrow appeared in the New York Times Magazine; Farrow made appearances on “Late Night With Jimmy Fallon” and “Real Time With Bill Maher,” to breathless reviews.

But then “Ronan Farrow Daily” premiered. And in its little more than three months on the air, it has struggled in the ratings and largely failed to engage the cultural conversation. Between April 28 and May 23, his 1 p.m. show generated an average of just 50,000 in the demographic most desired by advertisers in news programming, viewers ages 25 to 54, according to Nielsen. Compare that with the 161,000 tuning in to panel show "Outnumbered” on Fox News Channel, or the 73,000 watching  CNN’’s “Legal View.” So what went wrong? Why is the Ronan Farrow of “Ronan Farrow Daily” so different from what most of us — least of all MSNBC — expected?

Hiring Farrow was seemingly an attempt on MSNBC’s part to replicate the specific kind of precocity that has worked fairly well on-screen in the case of those other boy wonders: Hayes, Klein, Steve Kornacki. Their precocity is rooted in a wonky eagerness to share the entire contents of their brains — the kind of overconfident, evidence-heavy speechifying that tends to make for good TV. But Farrow is a different story. While his Twitter persona managed to seem studiously candid, his MSNBC persona just feels studious, like he’s curating a version of himself. He is a case study in how differently public attention works on and off the air.

The first inauspicious sign, eagerly seized upon by the Internet, was the ludicrous backdrop for his MSNBC set: a map festooned with such phrases as “Yale Law” and “Rhodes Scholar,” essentially a word cloud of its host’s résumé. Then there was the corny way Farrow invited his viewers to tweet at him about the most underreported topics of the day. On one show, he asked viewers to tweet their replies to the question “Why are you beautiful?”

His show is a mix of breaking and developing news items already being covered elsewhere, along with items best described as “NPR tabloid”: interviewing a Yale student whose weight has been a source of concern for the college’s administration; inviting former “American Idol” contestant Clay Aiken in to discuss his political bid in North Carolina; speaking to a Harvard professor at odds with the university over her decision to befriend a female student involved in a sexual abuse case; asking a “little person” what she most loves about herself.

And the dolphin trainer is just one segment among many on “Ronan Farrow Daily” in which the host trots out news items about racism, ill-treated minorities, foreign imbroglios and environmental upheaval, then earnestly asks his guests if such things are bad or have the potential to generate ill effects on society and life as we know it. For instance: “Is hate more prevalent than the average American realizes?” Or: “We are a nation of insurgents. Do you think this is something that the American identity will never escape?” And: “What about people who say the embrace of hyperskinny by the fashion industry, by the entertainment industry, is damaging to fuller-figured women?”

This may be the biggest surprise of MSNBC Ronan, in light of the way charisma oozed from his pre-TV persona: He’s boring. On the air, he is mannequin-ish and inaccessible, more suave ambassador than nerdy emcee. He’s not a clever orator like Maddow or a fiery one like Lawrence O’Donnell. He seems tightly wound on camera, particularly when interviewing guests who are not in the studio.  He tends to speak over them: Introductions and farewells are awkward largely because he does not pause for the inevitable “hello” or “thank you” a new guest or departing interviewee is bound to utter. He is also prone to telling viewers “we’ll come back to that point” when breaking into an interview, but never doing so.

Sure, part of the problem may be that MSNBC doesn’t quite seem to know what to do with him. If Farrow was seen as a means of building bridges with a new generation of viewers, why not launch him at 11 p.m., when youth-skewing stuff like “The Daily Show” has fared well? Putting him on at 1 p.m., when he is surrounded by ads for erectile-dysfunction drugs, pitches for the buffet line at Golden Corral, and direct-response spots for Life Alert (Help me! I've fallen and I can’t get up!) seems to defeat the purpose of a program that hopes to galvanize a generation. And Hayes, Kornacki et al. mostly got their starts on the network by filling in on prime time while Rachel Maddow or others were away. Their introductions were gradual; audience and host could feel each other out. Farrow arrived with a trumpet blast of publicity.

No one really expects him to talk about Woody and Mia in detail, but some color about what makes him interested in the topics he presents would be welcome. Instead Farrow’s unwillingness to apply his own experience to his interviews leaves the broadcast feeling oddly hollow. In recent shows, he has discussed his lack of finesse with e-cigarettes (“I’m so uncool someone handed me a vaporizer once and I had no idea what to do with it”); things he has in common with Republican congressman Darrell Issa (privacy issues); and his desire to broaden the two-party system of American politics. But that’s all just surface talk, loose threads in his diffuse prescriptions for world improvement. For all his big ideas about foreign affairs, his show is oddly absent of argument.

Once in a blue moon, a revelation. Last month, when interviewing Taren Guy, an African-American woman who embraces natural curls, Farrow at last made clear why this particular subject interested him. He had grown up with an African-American sibling, and understood the emotional duress hairstyles can cause, especially during one’s youth: “Oh, my poor white-lady mom, trying to make sense of all of it, doing those braids. She did a good job,” he said. Suddenly, a complicated cultural issue began to gel.

Farrow is trying hard to be a TV host. He surely means the things he says. But the idealism that felt genuine in his advocacy work seems lamely Oprah-esque amid the hard-edged snark of cable news. This may be the reality of our current cable news landscape: For optimism to be palatable, it has to be at least partly couched in frustration. Farrow radiates the happy aura of the golden child even while decrying humanity’s grossest injustices. His Twitter feed has gotten more toothless, too; he’s gone from dishing out self-aware jabs at Hollywood culture to numbly self-promoting. And with so little effort to sharpen the worldview of his show, its message is not unlike the sounds issuing forth from that dolphin swimming in Florida: We feel like there might be something meaningful to be gleaned — we just don’t know how to decipher it.

Brian Steinberg is the senior TV editor at Variety.