Stars: they're just like us! Welcome to the age of celebrity fangirling 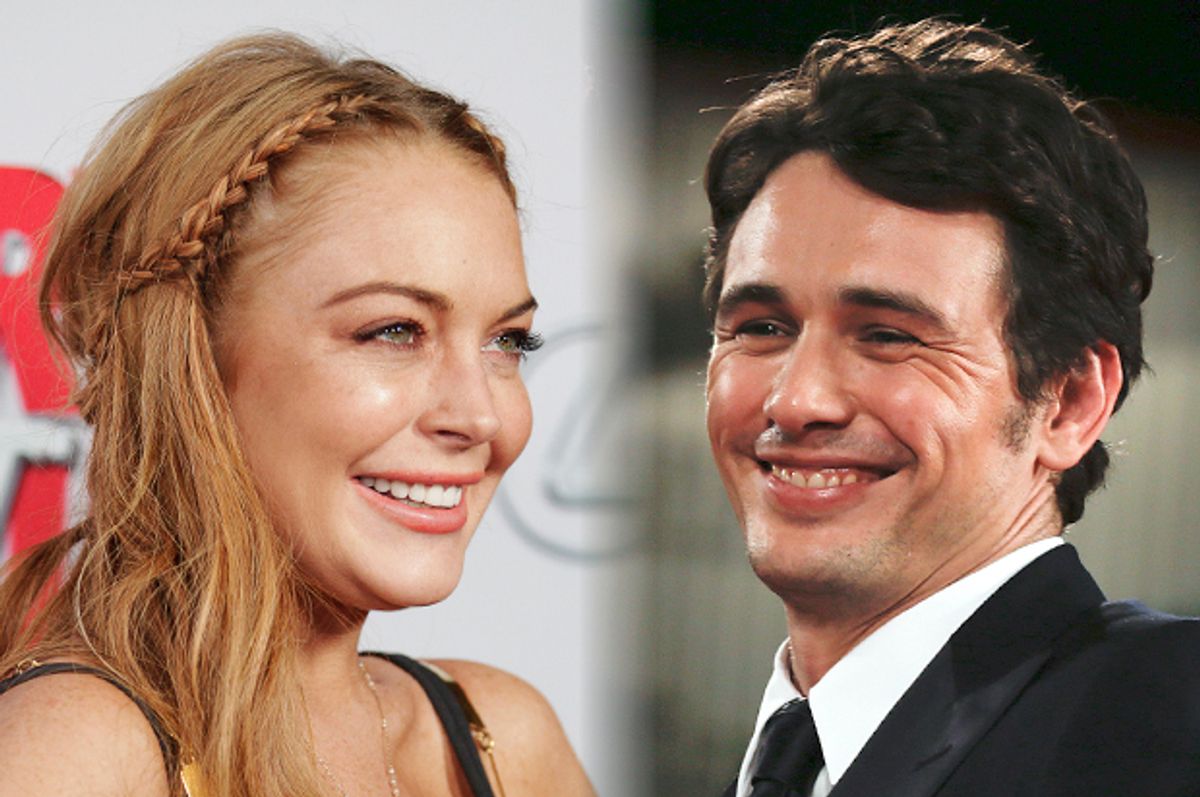 On first read, James Franco’s new short story "Bungalow 89" seems like another one of his personas — there’s Oscars Franco, creepy Instagram Franco, French-kissing "General Hospital" Franco. Then there's insufferable literary Franco, penning tales of celebrity vampire bloodsuckers who announce, “I live on the power of celebrity, and I am celebrity,” while lulling Lindsay Lohan to sleep by reading her a lesser-known J.D. Salinger short story. (Because "Catcher in the Rye" is probably too Salinger-lite for Franco.) It’s categorized as fiction, and it very well might be fictionalized, but it's also something more: It’s fan fiction.

We (i.e., those of us who follow celebrity gossip as a bible) know that this short story is a response to Lindsay Lohan’s “people I slept with” list. Lindsay Lohan may not have many fans left at this point, but Franco's fictionalized account seemed to be sending out a message of support for the wayward star. Or at least a kind of meta-commentary on the celebrity experience at large. Welcome to the age of celebrity fangirling: an endless self-referential web of stars fanning each other's egos.

Traditionally, "fangirling" has been associated with the high-pitched screams and limo-pawing that accompanied The Beatles, Ricky Nelson, Leif Garrett, pre-"21 Jump Street" Johnny Depp and Biebs circa 2011-2012. But today fangirling has evolved beyond tween Beliebers. Roberta Flack sang about fangirling in “Killing Me Softly.” (The song was apparently inspired by a young singer named Lori Lieberman who was enamored of “American Pie” singer Don McLean.) Rainbow Rowell recently captured the world of a fan fiction writer a la "Twilight" in her book Fangirl. Gossip queen Elaine Lui of Lainey Gossip even knighted the word "fangirl" as an honorary verb.

Since there are a few levels of celebrity fangirling, let’s tease it out.

1. Full-exposure fangirling: The celeb writes a highly personal story about another celeb, or "accidentally" leaves a self-congratulatory list of celebrity conquests in a public place. There’s an acknowledgment that some of it probably happened. Public goes wild trying to parse it.

2.  J-Law breathless teenybopper fangirling: There are too many accounts of Jennifer Lawrence fangirling other megastars to document, but two examples include her reaction to Jack Nicholson flirting with her at the Oscars and another when she freaks out, snorting “I’m such a big fan,” over seeing Jeff Bridges. There’s also every single award-winning actress who gushes over Meryl Streep at the podium.

I personally like when my celebs do some low-level fangirling at each other (as opposed to relating semi-factual tales of one-night stands with child stars-turned addicts) because it feels appealingly authentic. But celebrity fangirling is like celeb culture 2.0: It allows the celebrity to participate in celebrity culture (Celebs: Just Like Us!) while maintaining a (small) degree of self-awareness about the whole absurd spectacle of fan culture.