The tech industry's God complex is getting out of control 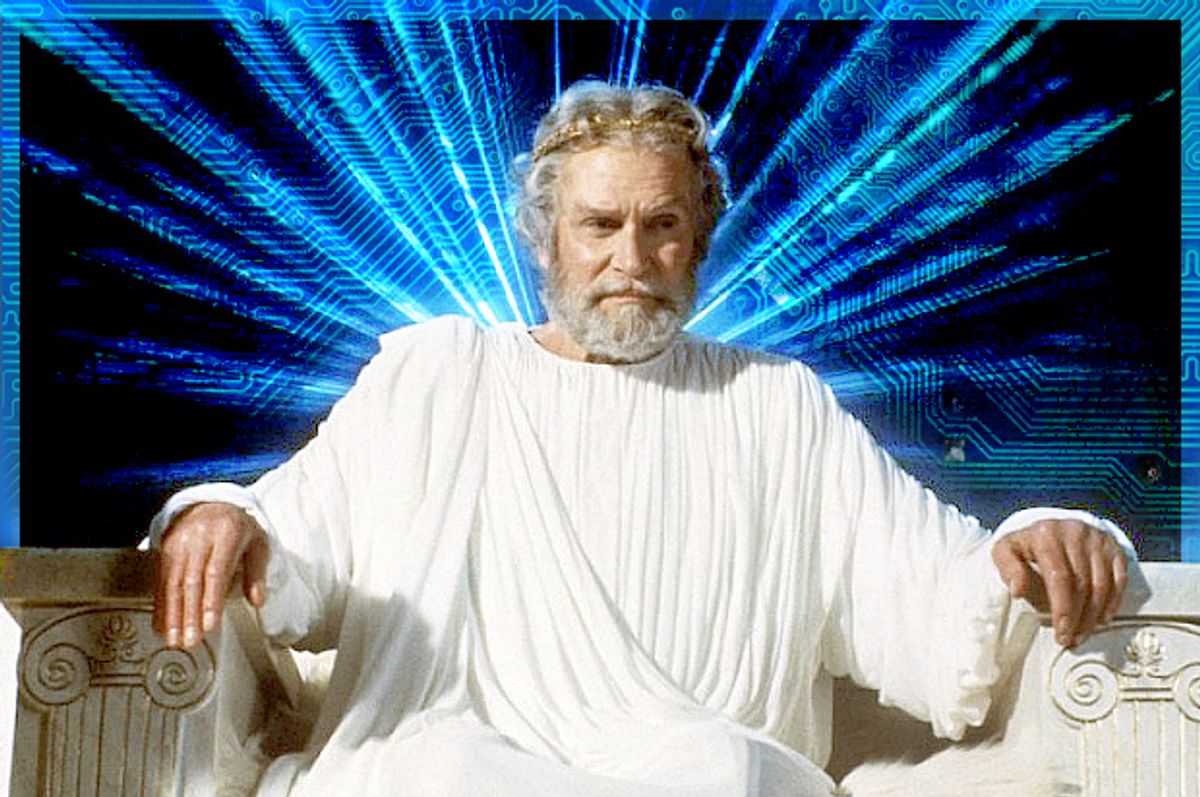 Lawrence Olivier as Zeus in "Clash of the Titans"
--

The Greeks had a word for this, I thought, as I worked my way through Marc Andreessen's most recent epic tweet storm.

The venture capitalist -- who has suddenly begun treating Twitter as his own personal pulpit for delivering Silicon Valley's version of the Sermon from the Mount -- was explaining to his 124,000 followers the awesomeness of the "superpowers" that emerging technology has bequeathed to each and every one of us:

A new age of wonder is at hand, Andreessen declared; a miraculous era in which our smartphones and network-accessible Web services and 3-D printers and Uber-on-demand-everything have made us all veritable demigods. The amazing things we will do with these superpowers will overwhelm the naysayers who worry about inequality and job loss and economic decline. With our new superhuman abilities, we will all be mighty Avengers, equipped to save the world from any possible crisis, and able to develop our individual potentials to the highest maximum.

But all I could think was be careful what you wish for, as I recalled my favorite -- and most pithy -- Greek myth, the story of Salmoneus.

Salmoneus, ruler over Elis, was a wealthy and unjust prince with an arrogant heart. He had founded a beautiful city and called it Salmonea, and he grew so overbearing in his pride that he commanded his subjects to give him the honors and offerings due to a god. He wanted to be taken for Zeus himself, and he traversed his country and other parts of Greece in a chariot meant to resemble that of the Thunderer. To accomplish this, he tried to imitate lightning with torches launched through the air, and thunder with the hoofbeats of champing horses which he drove over a brazen bridge. He even had people killed and then pretended that his lightning had struck them down. From the heights of Olympus Zeus noted his folly. He reached into the thick of the clouds, drew forth a real thunderbolt, and hurled it at this mortal, raging in madness and insolence below. The bolt shattered the king and destroyed the city he had built with all those who dwelt in it.

The story of Salmoneus occupies just one paragraph in "Gods and Heroes," a 700-page compilation of Greek myths and legends put together by the 19th century German writer Gustav Schwab. But it is still one of the best definitions of the concept of hubris you are likely to find. And like all good Greek myths, its relevance to current affairs remains undimmed. The aspiration to have superpowers like gods is an invitation to trouble.

So watch out, Silicon Valley! Because Marc Andreessen is hardly alone in tech circles in his passion to imbue the fruits of the computer age with ecstatic digital millennialism. The Rapture is coming -- only it will be delivered not by Jesus, but the Silicon Chip! At its most grandiose outer reaches, the rhetoric encompasses the dreams of post-Singularity immortality spun by the likes of Ray Kurzweil, who is convinced that it won't be long before we free ourselves from all mundane restrictions by downloading our consciousnesses into the matrix. (Seriously.) But on the opposite end of the spectrum, the new tech zealots display annoying habit of applying the same rhetoric to the most trivial of exercises.  Consider the start-up that calls itself Superhuman -- it produces  software that allows you to seamlessly update your calendars via email. (Seriously?)

Andreessen situates himself between the sublime and the ridiculous, with the added fringe benefit that he is a prominent funder of many of the companies that he believes are handing out superpowers hither and yon. And he's worth taking seriously, because of course there is plenty of truth to this digital transhumanism. Smartphones are amazing, connecting us effortlessly to the sum of human knowledge and artistic creativity, able to summon limousines in a single click. Accidentally leave your smartphone at home, and you may well feel crippled for the rest of the day. (Or liberated, because as Peter Parker well knows, superpowers can also be a curse.) There's a lot of digital empowerment going on these days, faster even than we can keep track of.

But all this empowerment comes with a heaping dose of hubris. The metaphorical power of Silicon Valley's superpower fetish has real-world implications. Once you believe you have superhuman abilities -- or that you are bestowing superhumanity on the rest of the world -- you also tend to believe no one can or should stand in your way. (Iron Man doesn't play by the rules! Nor does he care about the puny quibbling of governments and social critics. He just does what he wants.)

He who wields the thunderbolt wields the power. Rules are meant to be broken. In the Marvel Universe, and on Mount Olympus, might makes right. When the apostles of Silicon Valley tell us to "let markets work," or blithely ignore existing regulatory structures and plow ahead with their "disruptive" start-ups, they are making a similar show of force. But we should be cautious in our hero-worship. Because as even the most cursory acquaintance with Greek myth makes clear, Olympians really shouldn't be trusted to use their godlike powers responsibly.

The gospel of Marc Andreessen goes all the way back to Prometheus. The first superpower was fire, after all. The fruits of the Enlightenment and the Industrial Revolution advance the basic theme. Electric lighting, steam power, automobiles, the telephone -- "For 500+ years," Andreessen tweets, "we've collectively been radically enhancing capabilities of ordinary humans through technology superpowers."

The last 10 years, however, have really kicked things into gear. Now our superpowers include having the world's total knowledge base available "for free," connection with "everyone important in your life" via social media "for free," the ability to never be lost and always know where your kids are via GPS-enabled devices, access to the entirety of recorded music, anywhere at any time, and even the sharing-economy-enabled ability to "easily move around and then stay places with transparency and safety" via Airbnb or Lyft or Uber. And so on.

"I am firmly convinced many people are fundamentally underestimating the power and potential of these new superpowers in the years ahead," tweets Andreessen, suggesting that future examples will include crowd-funding's facilitation of fundraising, the quantified self's "superpower to understand one's own body continuously in real time, optimize health & wellness with high precision," and 3-D printing.

Of course, we can quibble. Web services are not "free" -- we pay for them by surrendering our most intimate personal information and allowing ourselves to be targeted by advertisers. Is the ability to summon a car via Lyft really comparable to fire? And come on: The superpower to always know where your kids are lasts as long as the charge on a phone battery, or until they decide to turn their trackers off. Hera is not impressed.

There's also the niggling point that the same superpowers that enable our vast potential are easily used against us by governments and corporations and criminals. The NSA now has superpower surveillance ability. Hackers have the superhuman ability to invade and control our computers. Advertisers have superhuman behavior modification powers to influence what we purchase. Andreessen chooses to believe that technology is balancing the scales by giving individuals powers that put them on a level playing field with existing authorities. But that's far from certain.

But Andreessen is certainly not wrong in seeing the last 10 (or 20 years) of innovation as a major and important transition. To Skype with your daughter on another continent can feel magical. The way that, say, YouTube tutorials enable an extraordinary efflorescence of DIY creativity is undoubtedly empowering. And, if the Wall Street Journal is to be believed, and workers in China are taking advantage of social media and smartphones to effectively organize for their rights, well, that is indeed super-powerful. More of that, please.

As Hillary Mason -- a data scientist in residence at the venture capital firm Accel, who regularly gives lectures on how our new ability to make sense of big data gives us "superpowers" -- observes, "A raw human voice can't reach halfway around the world, but a tweet can. As a human, we can only perceive our own experience, but data gives us a window into the collective behavior of our species."

We shouldn't deny or dismiss the transformative power of technology. But we should investigate very carefully the psychological and political implications of embracing the superpower metaphor. On one level there's the omnipresent danger of promiscuous trivialization -- the hype that lumps room-sharing in the same category as fire or the steam engine. As Mason acknowledged to me, "there's something deeply disturbing about the construction of these 'change the world' narratives around trivial products."

But a bigger challenge is in understanding how fixation on superhuman abilities transforms feelings of powerlessness into attitudes of superiority. The modern conception of superpowers and superheroes got its start in the comic books of the 1930s.  Sociologist Harry Brod, the author of "Superman Is Jewish: How Comic Book Heroes Came to Serve Truth, Justice, and the Jewish-American Way"  argues that the Jewish creators of Superman, Jerry Siegel and Joe Shuster, were working out their resistance to cultural stereotypes of nebbishness when they dreamed up their larger-than-life creations. (Michael Chabon makes a very similar argument in "The Amazing Adventures of Cavalier and Klay.") For Brod, Silicon Valley's embrace of superhuman abilities can be traced back to similar cultural forces. "The Silicon Valley interest in superpowers is the revenge of the nerd," Brod told me. "It's Walter Mitty in high tech."

The once marginalized geek has discovered that, through power of the code, one can conquer. Google Glass is just an obvious stepping stone to a full-fledged Iron Man suit. (You know you want one.)

How this attitude feeds into libertarian ideology hardly needs belaboring. If you're empowering the entire world to become superheroes, then anything that gets in your way must be Hulk-smashed. Arrogance is a natural byproduct of superpowers. And it makes possible the writing of sentences like, "if you live in the San Francisco Bay Area in the early 21st century, it’s hard not to feel a special connection to Renaissance Florence." Yeah, start-up entrepreneurs in Palo Alto are just like the Medici Grand Dukes. Except, even better, because they've got superpowers.

Marc Andreesen tweets that tech superpowers "upgrade us as creators, builders, inventors, designers, artists: *producers*." And it is certainly true that the smartphone -- infinitely more accessible and far cheaper than the personal computers of yesterday -- democratizes access to the information age. But what he fails to mention is that, when everyone has superpowers, that's the same as nobody having superpowers, and the same social inequities that give some people advantages over others will reassert themselves.  The advantages of class, wealth and location don't vanish.

We should also recall what really fuels our long-standing cultural obsession with superpowers, from the myths and legends of antiquity to comic book adventures in Marvel and DC right up to the newest app downloaded from our iPhone. It's all about escape, whether from the humdrum existence of standing in line at the cashier, or our own sense of inadequacy and frustration. But as both Homer or Stan Lee could tell you, there is no escape. Superheroes and Olympian gods are just as petty and jealous and conflicted as the rest of us. Their personal lives are a mess and their ambitions often are the seed of their downfall. Silicon Valley should beware the example of Salmoneus.

Superpowers don't make us better people, and they won't necessarily deliver us a better world. But the people who figure out how to sell them will become very, very rich.