A fissure in the dam of political reality: How Eric Cantor's defeat foreshadows the coming apocalypse

For what could be a portrait of our own societal collapse, look to Robert Pattinson's dystopian drama "The Rover" 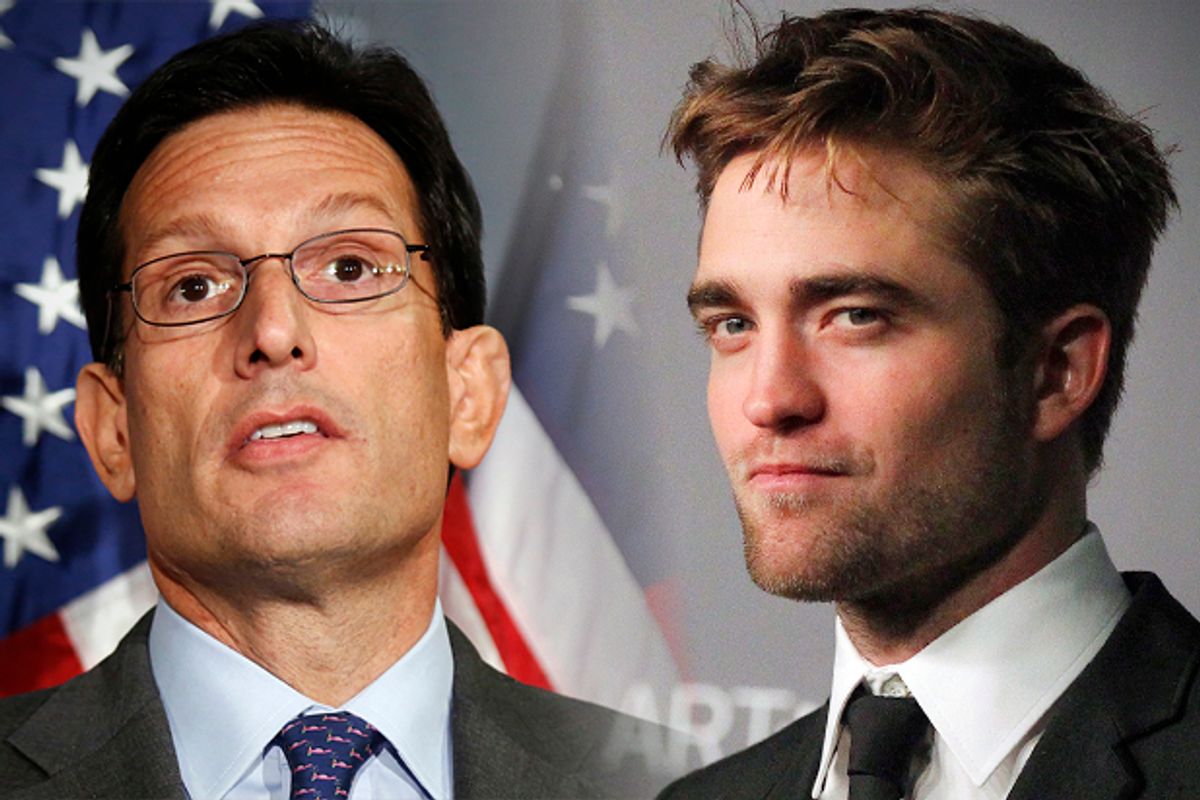 The unexpected defeat of a sitting House Majority Leader by an obscure primary opponent in one of the safest of all deep-red gerrymandered seats is an event that cries out for interpretation – and we’ve been deluged with those all week long. Most political analysts agree that Rep. Eric Cantor, R-Va., was punished by Tea Party Jacobins, who perceive him as squishy on immigration and lacking in ideological purity. That might sound like a funny way to describe a guy who has been the ultimate embodiment of an intransigent, obstructionist, do-nothing Congress, but the Tea Partyers had a point. (We’ll get to that.) Or maybe Cantor was ousted by “savvy Democrats” who crossed over to vote against him in Virginia’s open-primary system, or was a victim of covert anti-Semitism, as a Jewish congressman from a district rich in evangelical conservatives.

Maybe the unlikely primary victory of economics professor David Brat demonstrates that money doesn’t matter in politics as much as people think (since Cantor’s campaign outspent Brat’s many times over), and maybe it was the result of a long-term strategy and “dark money” from libertarian billionaires. Maybe the result is a welcome wakeup call for the Republican Party, and maybe it’s a boost to the Democrats’ chances of retaking the House in November (which were, and still are, slim to none). But the people on both sides trying to argue those positions are partisan hacks, desperately trying to spin the Cantor-quake such that it fits into the established Manichaean narrative of American politics. Which it clearly does not. In fact, I would argue that Cantor’s defeat is bad news for both parties and for the stagnant system they represent. If anything, it may signify a nascent or immanent threat to that system.

Cantor’s downfall put me in mind of a famous line in German radical playwright Peter Weiss’ 1960s theatrical experiment “Marat/Sade,” when French revolutionary firebrand Jean-Paul Marat (later to be murdered in his bathtub) tells his followers, “Things are breaking down things are chaotic that is good that’s the first step.” Whether Marat’s idea of “good” conforms to yours or mine is one of the play’s questions, and in the case of Dave Brat’s likely ascension to Congress we might well ask, a first step toward what? A party leader’s inglorious defeat, in what was supposed to be an uncontested primary election, has sent shivers through every Washington insider and every member of the professional commentariat, irrespective of his or her supposed ideology. It’s a fissure in the dam of political reality that requires immediate patching, before the rest of us notice that the dam could give way at any moment.

I don’t claim that the total collapse of our political system is likely to happen anytime soon. But I also think it’s a mistake to assume that it will keep on going more or less the way it is, decade after decade into the future. David Brat by himself means nothing. He can be absorbed by the Republican majority and told that if he stays quiet he gets a couple of fun committee assignments and more campaign cash than he’s ever dreamed about. But the fact that people voted for him signifies that the machine of self-oiling bipartisan consensus is breaking down. It creaks and grinds, frozen in many places and freewheeling in others; Eric Cantor got caught in some of the misaligned gears. The combination of steady economic decline and worsening inequality, environmental degradation and political stagnation is not likely to end well, and there are moments when those at or near the top of the system can’t avoid that fact.

One grim but entirely plausible vision of the apocalypse that could result from those converging factors can be seen in the new Western-style futuristic thriller “The Rover,” in which Guy Pearce and Robert Pattinson struggle across the dessicated landscape of Australia, a decade or so after an unexplained social and political collapse. Writer-director David Michôd, who last made the memorable Melbourne gangster drama “Animal Kingdom,” resists many of the usual clichés of this genre (even if he’s clearly riffing on the classic “Road Warrior” movies). In his imaginary future there are still cars and electricity, still a cash economy of sorts, and some kind of a vestigial state making a feeble effort to keep the peace. Freight trains pass through, covered with Chinese characters and protected by heavily armed guards. It’s more like a recognizable end point for current trends than a total destruction of civilization. (As a movie, to revert to my critical gig for a sec, it's unforgiving and often unfriendly, but brilliantly played and photographed.)

Whether Michôd intends “The Rover” as a specific rebuke to libertarians or anarchists I have no idea, but the film certainly paints a dire portrait of human behavior in the absence of a functioning social contract, or a state apparatus motivated by some form of moral imperative. On one hand, it’s a social vision drawn from cinematic history, from our ideas about the lawlessness and brutality of the Old West. But it also depicts a stage of impending and distinctly possible capitalist decay, in which Westerners used to being at the center of things must adjust to being on the periphery, and where the cheap consumer goods made by Asian children have been stripped away, leaving behind a minimal commodity economy in which human life is the ultimate devalued currency. Of course it’s a huge imaginative leap from one primary election in the Richmond suburbs to the collapse of society. I’m not saying that one leads to the other, only that Tuesday night’s surprise was not pleasant for anyone at or near the precipice of power, and that it came with a smoky flavor of doom that must be scrubbed away.

For those hard-spinning party apparatchiks -- and for the political media in general -- the only possible significance of the Cantor surprise (or anything else) lies in the short- or medium-term question of who it hurts and who it helps, in its perceived effect on the endless sumo-wrestle between evenly balanced forces for control of the institutions of government. But all that wonky analysis, and all the overheated rhetoric of Fox News and MSNBC, is meant to conceal a number of crucial facts about American political life, most notably the fact that victory is meaningless and the prize is not worth having. The institutions of government -- or at least the ones we can see, and get to vote on -- are paralyzed and dysfunctional. Every time one party appears to sweep to power, the other one comes roaring back, as in Newtonian physics: The Newt Gingrich “Republican revolution” of 1994 followed the election of Bill Clinton, just as the Tea Party wave of 2010 followed the election of Barack Obama.

As I noted earlier this week when discussing how the public’s rapid shift on marijuana policy has left both parties behind (especially the Democrats), there’s another great truth of American politics that is deliberately overlooked by the mainstream media, which is that neither party really represents the people they claim to represent. Democrats have a slight advantage on this front, in that in recent history they have relied largely on cosmopolitan symbolism, and have hardly ever claimed to represent anyone in particular. (“We’re not vicious assholes” is not really a demographic.) But the election of Dave Brat -- we can stop pretending that his equally silly Democratic opponent has a chance -- suggests that some Republican voters have begun to notice this disjunction.

It’s pretty much an open secret in politics, as Paul Krugman has observed, that the Republican Party’s hold on political power relies on an elaborate game of bait-and-switch. The GOP’s ground-level organization gets out the vote with whatever combination of racial panic, “God, guns and gays” social issues and Tea Party fiscal extremism is required, and then the elected officials go to Washington to do the bidding of corporate overlords who don’t particularly care about any of those things. If immigration was the specific issue that brought down Eric Cantor, it also symbolizes the inherent contradiction between the nativist populism of the GOP base and big capital’s yearning for an abundant influx of cheap labor. As Krugman puts it, if the Republican base voters of Virginia’s 7th District concluded that they “didn’t trust [Cantor] to serve their priorities as opposed to those of corporate interests,” they were absolutely correct.

What Krugman has noticed -- along with quite a few commentators on the far right, to be fair -- is that Cantor’s downfall was the inevitable result of a systemic malfunction, and not an unrepeatable anomaly stemming from low turnout or a single-issue voter meltdown. I have no reason to dispute the general consensus that Brat is an Ayn Rand-style libertarian xenophobic wingnut, but it is also true that he campaigned in favor of sending crooked bankers to jail, against corporate welfare and against Cantor’s vigorous support of the NSA spy programs. Anyway, I don’t have to like Brat or agree with anything he says in order to interpret his victory as writing on the wall, exposing essential contradictions that were already present in the personage of Eric Cantor, but more or less concealed.

Beltway politics have largely been a matter of feudalism, tribalism, institutional stalemate and ideological showmanship for 20 years, but prominent Republican figures like Cantor or Paul Ryan or John Boehner were required to feign statesmanlike qualities, to pretend that they actually wanted to govern if only the socialistic tax-and-spend liberals would get out of the way. Voters who trade in the power and savvy of a political pro like Cantor for an inexperienced academic zealot are sending an entirely different signal. They don’t buy the entire enterprise: They don’t want the compromise and collegiality and backroom dealmaking of old-school Washington (which we don’t have anymore anyway), and they don’t want the pretense of it either.

Since none of the ideas Brat apparently represents have any real chance of gaining power, it’s a vote for overt feudalism and tribalism, rather than the quasi-polite Eric Cantor variety. It’s a vote for continuous confrontation and stonewalling, for brinksmanship and repeated government shutdown, for permanent dysfunction and racial balkanization. It’s a vote for no state at all rather than the Potemkin semi-failed state we have now, which at least is honest. In effect, it’s a vote for Marat, a vote for “things are chaotic things are breaking down that is good.” Know what he says next? “Now we must take the next step and choose a man who will rule for you.”