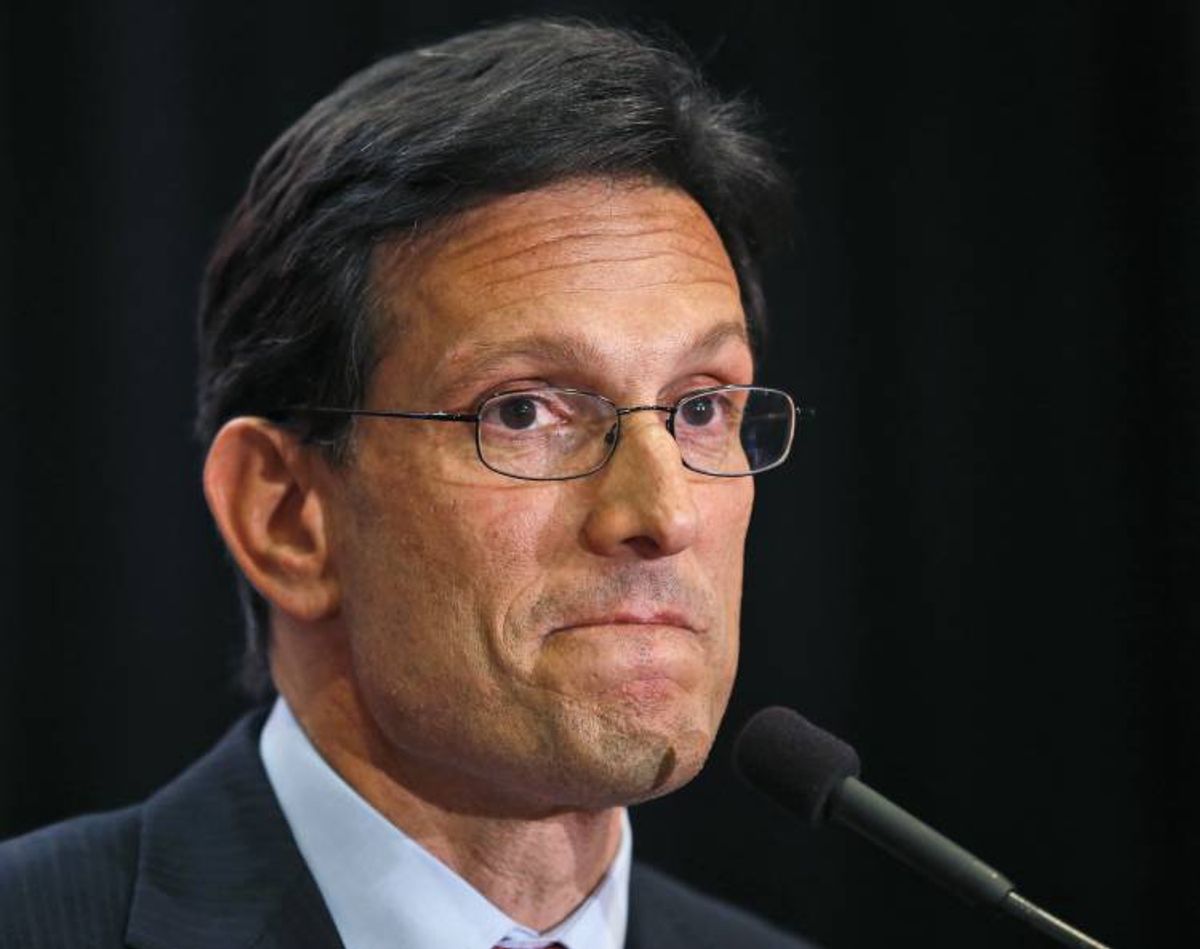 Last Tuesday was not supposed to be one of the most important days of Eric Cantor’s life. Defeating an amateur politician like David Brat — a professor of economics at Randolph-Macon College and an Ayn Rand enthusiast — in a low-turnout primary election is not usually the kind of thing a seasoned veteran like Cantor makes a point to remember. He was the House majority leader, after all, and he was relatively young and healthy to boot. Barring some unforeseeable catastrophe, his chances of becoming the first-ever Jewish speaker of the House were pretty darn good. For much of the past few months, worrying about Brat was probably not at the top of his list.

But then the results started coming in, and before anyone could even transition from shock to disbelief, the Associated Press had called it. David Brat had pulled off one of the biggest upsets in recent political history, and Eric Cantor’s political career was done. He announced his plan to resign as majority leader one day later.

What was lost in the hubbub was the importance of a single number, one that is impressive at first but is rather tiny when placed in the proper context: 36,110. That's the number of voters who marked their ballot or pulled that lever for David Brat. That's the total group of people from which pundits in a land of well more than 300 million are trying to divine some revelatory socio-political secret. That’s less than 40,000 — around .01 percent of the entire U.S. population. A smaller figure than what used to be the norm for motor vehicle accident fatalities every year.

With that in mind, I’d say a little skepticism in response to anyone drawing overarching conclusions from Cantor’s defeat is warranted. To pick one popular explanation: It may be true that Cantor’s tepid support for some version of piecemeal immigration reform is to blame for his downfall (though more than a few experts say this is doubtful). But that hardly means a path to citizenship is unpopular with the public at large or even self-identified Republicans, both of whom support the sentiment by, respectively, 76 and 66 percent. And it may be true that Cantor’s team had lousy constituent services and cared more about Republicans in D.C. than voters back home. But that doesn’t mean today’s vulnerable politicians can save their seats by being a bit quicker to pick up the phone.

Indeed, reading the smartest analyses of Cantor’s loss (or Brat’s win, depending) can bring you to the conclusion that the upset this past Tuesday may not have meant much of anything at all. RealClearPolitics’ conservative election wonk Sean Trende, for example, writes that Cantor lost in large part because he failed to appreciate the mindset of the GOP base that has decided to pretend they weren’t the very people who were most supportive of Bush during his presidential years. “Voters gave Republicans control of Congress and the presidency for the longest stretch since the 1920s,” Trende writes, channeling the preferred narrative of the GOP base. “And what do Republicans have to show for it?” Conservatives gave Bush and company free rein, Trende repeats, only to find that “almost everything … achieved during that time moved the needle leftward on domestic policy.” (Whether Trende himself buys this framing is not clear.)

Another valuable piece written in response to the news came from Jonathan Chait, who noted a new Pew Research Center survey showing that unlike every other political group in the country, hardcore conservatives viscerally reject the idea of compromise for its own sake. “Conservative Republicans,” writes Chait, “hate compromise in general.” And that’s the explanation, he argues, for why the GOP-backed Medicare Part D was accepted but Bush’s bipartisan attempt to overhaul the immigration system was not. It also explains why the down-the-line hard right Cantor was deemed insufficiently conservative — because he only refused to work with the president on about 95% of the issues. Obstructing Obama since before he even took office while simultaneously agreeing that, in principle, DREAMers don’t deserve to be deported was, apparently, not nearly enough. At fleeting moments, Cantor betrayed a belief that the president wasn’t evil incarnate. He had to go.

Putting Trende’s analysis together with Chait’s probably gets us closest to the truth. Seen through this lens, the results on Tuesday weren’t caused by Cantor’s supposed ideological heresies or even, pace Ben “Cooter” Jones and the New Yorker’s Ryan Lizza, a more generalized populist rage over the (totally normal and inevitable) collusion of big government and big business. It wasn’t about policy and theory, in other words. It wasn’t that Cantor strayed from Reagan’s electoral strategy (uniting big business with economic and social conservatives) or rejected the panglossian free-market clichés of the libertarian right. The problem, instead — besides the fact that he ran a haphazard and maladroit campaign — is that many of the 36,110 people who voted against him saw Cantor as a living reminder of conservative politicians’ failure to transcend the sordid reality of self-government and turn the U.S. into a right-wing paradise by pure rhetorical force.

Simply put, what Cantor’s defeat tells us is that the GOP base is out of touch and prone to throwing tantrums, which is nothing that we didn’t know already.