Ugly, paranoid, divisive politics: The GOP are all Know-Nothings now 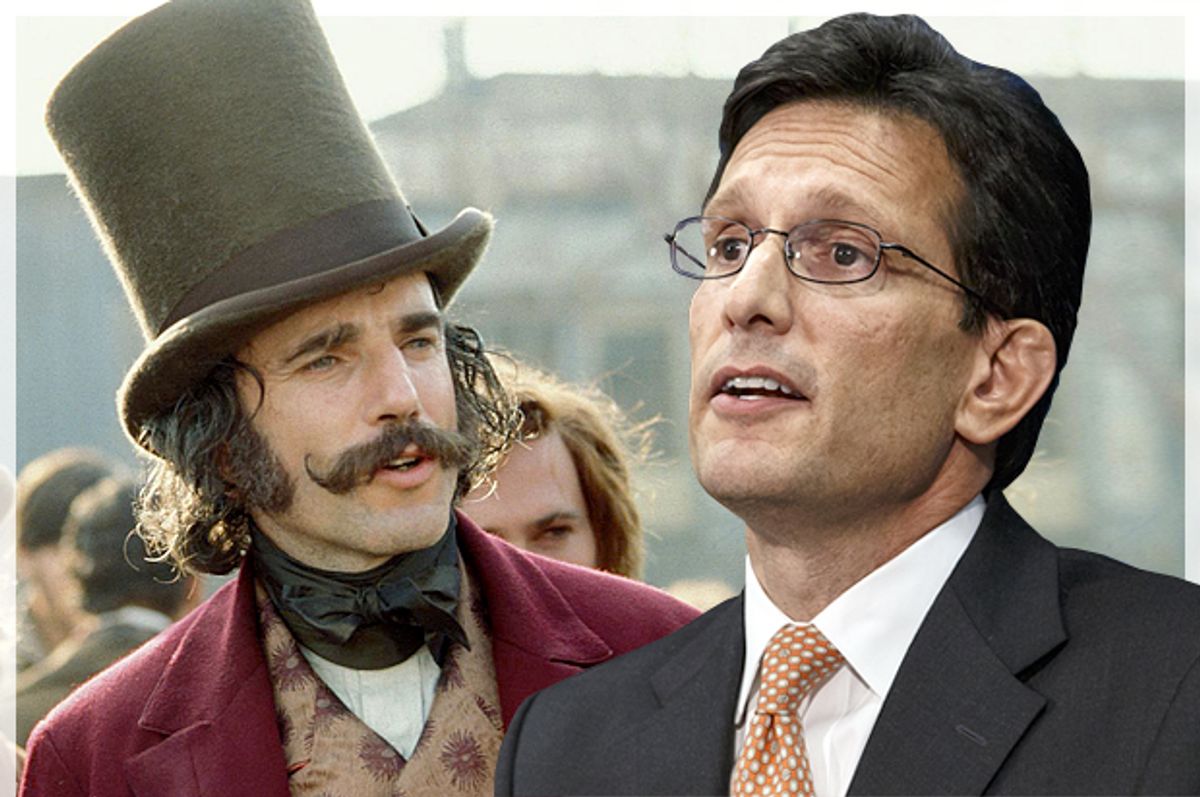 Majority Leader Eric Cantor's stunning primary defeat to political unknown David Brat sent shock waves through the political world on Tuesday, and nobody seems certain of how or where it will all end. But we can say something about where it began: the 1850s. That's when the Republican Party emerged from the collapse of the Whigs. But it was not alone. Another party emerged alongside it in the 1850s — the conspiracy-minded anti-immigrant/anti-Catholic American Party, also known as the “Know-Nothings,” which initially overshadowed the Republicans — winning 52 House seats in 1854 to 13 for the Republicans — but quickly faded from sight. Martin Scorsese's "Gangs of New York" is a fictionalized account of the actual ground-level conflicts out of which the Know-Nothings arose. Daniel Day Lewis's character, Bill the Butcher, was based on an actual Know-Nothing leader, William Poole — a Joe the Plumber type with homicidal tendencies. Now, Cantor's out-of-the-blue defeat is the clearest signal yet that the Know-Nothings and their bleak vision are back, full force. Ultimately, they didn't have to knock off the Republicans; they've simply taken them over from within.

The Know-Nothings began as a grassroots, anti-immigrant/anti-Catholic movement based in local lodges. When asked about their activities, members were sworn to say “I know nothing” — hence the name. But the willingness to embrace ignorance also reflected something broader about them: a focus on their own self-defined cultural values, and a disdain for learning anything outside the sphere of what they already “knew.” This is what the term “know-nothing” has come to signify ever since, and though it gets the exact letter of its origins wrong, it captures their spirit precisely.

The most obvious tip-off that the Know-Nothings are back is the salience of immigration in Cantor's upset. Although immigration wasn't everything, as early stories took it to be, it did play a crucial role in mobilizing activist support, shaping the campaign narrative, and highlighting how Cantor's careerist ambitions clashed with the sentiments of his political base. Still, the most important way immigration figures into this story is in terms of the party's future, not Cantor's past: it further derails the GOP's efforts to escape from the consequences of feeding their own paranoid, xenophobic base, lo these many decades. That base is what's transformed the Republicans into Know-Nothings right before our very eyes — but it was politicians like Cantor (like Bush, Gingrich, Reagan and Nixon before him) who manipulated the base to that point in the first place.

It's important to point out that PPP's poll on immigration attitudes in Cantor's district does not refute the role that immigration played in this race. PPP asked about specifically described legislation, and found broad support by a substantial margin — but that's not at all the way in which immigration is discussed among Republicans generally, and in the Cantor/Brat primary in particular, where the rhetorical flavor is much more reminiscent of the Know-Nothing movement, as Wikipedia describes:

It promised to purify American politics by limiting or ending the influence of Irish Catholics and other immigrants, thus reflecting nativism and anti-Catholic sentiment. It was empowered by popular fears that the country was being overwhelmed by German and Irish Catholic immigrants, whom they saw as hostile to republican values and controlled by the Pope in Rome.

The objects of demonization have changed, but today's anti-immigration rhetoric, and its embedding in the broader rhetoric of “taking our country back,” along with various means of voter suppression to limit the influence of cultural others is virtually identical to what the Know-Nothings were up to, but bears no resemblance at all to the Republicans of that same time.

The contrast between the Republicans and the Know-Nothings can be captured in terms of two recurring American traditions — progressivism and populism — but not in an overly simplistic way. Both traditions have their own strengths and weaknesses. It just so happens that the Republicans of that period represented progressivism at its best, while the Know-Nothings represented populism's ugliest attributes.

On Wednesday, Digby wrote a piece at her blog, “The American right wing populist strain was perfectly realized in David Brat's campaign,” in which she referenced a fascinating 1995 paper by Yale law professor Jack Balkin, “Populism and Progressivism as Constitutional Categories,” an excellent source for mapping out the complexities involved in these traditions. As he explains:

By "populism" and "progressivism," I mean to invoke the spirit of two successive reform movements in American history, the first primarily agrarian and the second urban....

Although populism and progressivism share a desire for reform, they diverge most significantly in their attitudes towards the beliefs, attitudes, and actions of the mass of ordinary citizens. They take different views about ordinary citizens' private activities, their cultural attachments, and the possibility of their participation in mass politics.

Bluntly put, progressives think people need fixing in order to be decent citizens. They must restrain their passions, study the issues, learn from experts and adopt the norms of serious politics. Good citizenship is something to strive for. (They think in terms of the immigration questions asked in PPP's poll.) In contrast, populists think people are fine just as they are, and they have good reasons for not being more constantly involved in politics. Their “inattention may reflect the comparative urgency of the demands of everyday life, or a belief that government adequately albeit imperfectly serves their interests,” Balkin writes, “However, it may also reflect the growing judgment that government is the seat of corruption, privilege, cronyism, and injustice. At some point, this indignation will surface in popular political action, and when it occurs, it must be given its due.” Hence, cycles of close attention and inattention are natural, not pathological, from this perspective.

Balkin is clear that populism and progressivism cut across ideological lines, and that both have their strengths as well as their weaknesses. Personally, I find a great deal to admire in the populist movement itself. But the pathologies of populism Balkin identifies are quite real: “fascism, nativism, anti-intellectualism, persecution of unpopular minorities, exaltation of the mediocre, and romantic exaggeration of the wisdom and virtue of the masses,” and the Know-Nothings were a classic example of these pathologies run amok.

The Republican Party, in contrast, was a relatively healthy expression of progressivism, up until its political success began to breed corruption. But when it counted most — in the 1850s and '60s — the Republican Party's progressivism was, quite literally, America's salvation. While the American Party was reactionary, paranoid, destructive and divisive, with little or nothing coherent to say about the nation's future, the Republican Party was progressive and hopeful, with an expansive vision of national development. Not only was it morally opposed to slavery, it went on to start building railroads and establishing land grant colleges even as the Civil War raged. Thus, even more than the Whigs and the Federalists before them, the early Republicans were the party of national infrastructure development. They were supremely hopeful about their ability to shape a future world, where public investments laid the foundations for widely shared individual success, which would also unite the different sections of the nation.

This echoed the policies of the Whigs before them, as expressed in Henry Clay's “American System,” as described on the U.S. Senate website:

Henry Clay's "American System," devised in the burst of nationalism that followed the War of 1812, remains one of the most historically significant examples of a government-sponsored program to harmonize and balance the nation's agriculture, commerce, and industry. This "System" consisted of three mutually reinforcing parts: a tariff to protect and promote American industry; a national bank to foster commerce; and federal subsidies for roads, canals, and other "internal improvements" to develop profitable markets for agriculture. Funds for these subsidies would be obtained from tariffs and sales of public lands. Clay argued that a vigorously maintained system of sectional economic interdependence would eliminate the chance of renewed subservience to the free-trade, laissez-faire "British System."

This used to be what Republicans stood for — a deliberate counter to the dog-eat-dog, race-to-the-bottom doctrine they now worship, and a means for harmonizing interests that would otherwise tend toward deepening conflict. And when conflicts grew too intense — that's when movements like the Know-Nothings suddenly flared up, to further tear the nation apart. In short, the Tea Party Republicans of today represent exactly what the Republicans of the 1850s and '60s were struggling mightily against.

So remember this, the next time you hear someone calling the Republicans “the Party of Lincoln.” Remember what they really are, now: the Party of Bill the Butcher.