"Fast Times" and "Risky Business" created the '80s: How these iconic teen films led the way to "Heathers" and John Hughes

Sean Penn, Tom Cruise and the revolutionary "Ridgemont High" and "Risky Business" made a decade of teen film happen 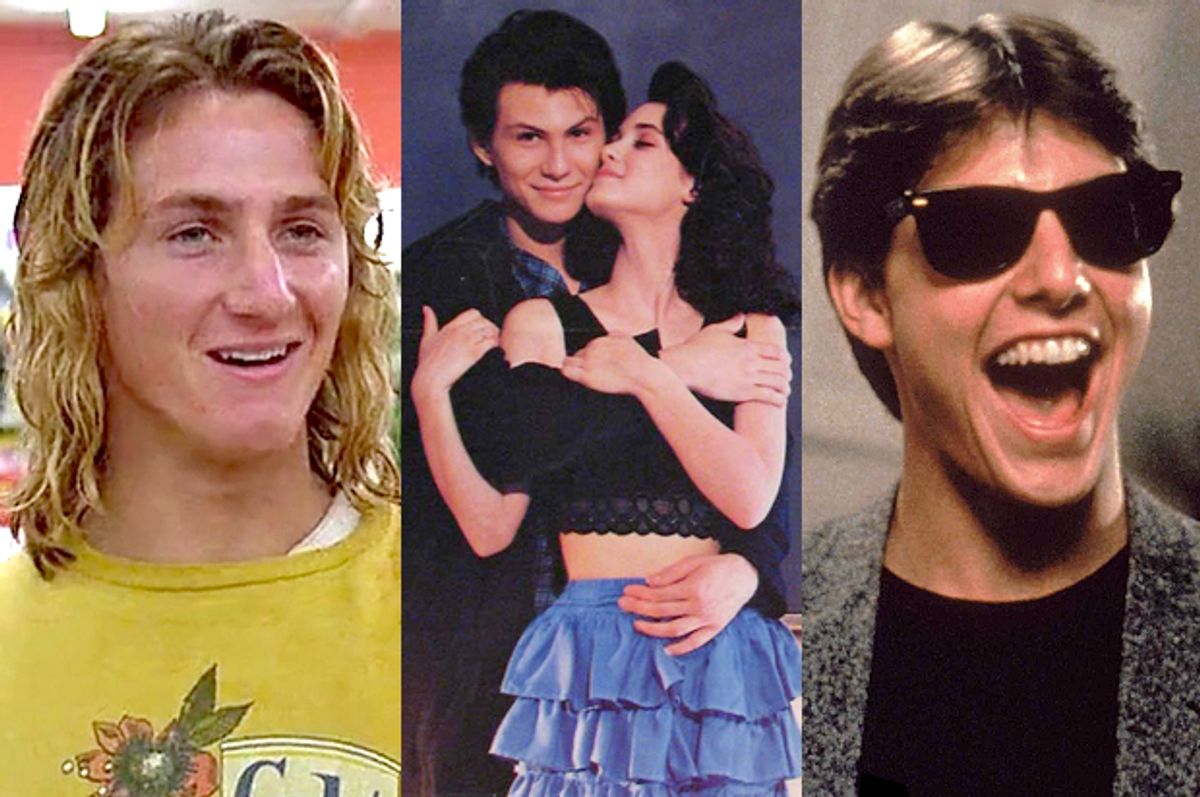 The sensitive, vulnerable, brutally frank '80s teen comedies didn’t begin with John Hughes. In this excerpt from Marc Spitz’s newly released "Twee: The Gentle Revolution in Music, Books, Television, Fashion and Film" (IT/Harper Collins) the story of how the square-jawed leading man gave way to the sexually fumbling, awkward but no less heroic leading men and how any femme fatales left among the equally awkward leading ladies had to learn to deal with them.

Beginning with the very early days of the AIDS crisis, Hollywood seemed to presciently churn out more and more teen-angst or teen-confusion-based entertainment, featuring sex-terrified boys (Tom Cruise in "Risky Business") on the cusp of manhood and confused girls (Jennifer Jason Leigh in "Fast Times at Ridgemont High") on the cusp of womanhood. These characters became the surrogates for a new generation of teens who were experiencing similar emotions in their real lives. It’s as if the times forced films into frankness. New Wave music, which featured on many of these film soundtracks, was a step ahead (Sparks’ “Angst in My Pants,” the Gleaming Spires’ “Are You Ready for the Sex Girls?”), but by mid-decade, the screen stars were all Devo. Nerds, the proto Twees were ready for their close-up.

On MTV, the sexy librarian wasn’t sexy until she let her hair down, took off the glasses, and kicked it with ZZ Top or Van Halen. But in film, the librarians were slowly winning out.

Part of the reason 1982’s "Fast Times at Ridgemont High" remains, three decades on, the most transformative teen film ever made is that it highlights this shift in sexual power. This is embodied by the dynamic between Robert Romanus’s slick, strutting, fast-talking Mike Damone and Brian Backer’s mole-like Mark Ratner, the hapless, virginal movie-theater usher. “Rat” is the only one who gets the girl in the end, even if they still don’t go all the way. Meanwhile Judge Reinhold’s Brad, a “single successful guy,” loses his job, and, in the film’s most famous scene, is sexually humiliated by Phoebe Cates when she walks in on him pleasuring himself. And Damone, as Cates’s Linda scrawls on his locker for all to see, is just a “little prick.”

Rolling Stone journalist turned filmmaker Cameron Crowe, then not too long out of his teens himself, went undercover at a real Southern California high school to deliver the book "Fast Times at Ridgemont High," then later adapted the screenplay for Universal Studios. Bronx-bred director Amy Heckerling turned Crowe’s script into a teen comic and a Twee milestone that would inform every other teen film that came later, from "Risky Business" to the John Hughes oeuvre. Jocks were on their sprint out.

“Cameron Crowe’s book set the tone,” says Eric Stoltz, who appears along with future "Revenge of the Nerds" star Anthony Edwards as one of Jeff Spicoli’s shirtless surfer buds, refused service at All American Burger (“No shirt, no shoes . . . no dice”). “It was rooted in the reality of the characters and situations. We were lucky enough to have Cameron on set every day, and he and Amy Heckerling were intent on making something true to life, rather than formulaic.”

“It’s no huge thing, it’s just sex,” Linda reassures Stacy as she prepares to lose her virginity, but everyone, even Linda (with her mysterious, off-camera, and possibly imaginary boyfriend), knows this is a lie. Hormones drive the film. Sean Penn’s Spicoli has ripped-out Playboy centerfolds taped to his bedroom wall; the film’s resident Buddha, zinc on his nose, has lust in his heart. Like the work of Dr. Seuss and Maurice Sendak, "Fast Times" is both sweet and, even with its occasionally broad, sketchy humor, painfully real. “If this film has a theme,” the powerful New Yorker magazine film critic Pauline Kael wrote, “it’s sexual embarrassment.”

“I can’t help doing what feels right to me [even] if it came out as awkward or sweet,” Heckerling says. “It wouldn’t occur to me to make those kinds of moments wacky.”

As with most future Twee films, from "Heathers" to Heckerling’s later foray into the world of unusually sensitive teens, "Clueless," the adult characters are ridiculous. This is a very common Twee trope.  In "Fast Times," there’s Mr. Hand (Ray Walston), who greets people with “Aloha,” and is convinced that half his student body is “on dope.” There’s Mr. Vargas (Vincent Schiavelli), who digs lustily into cadavers and has just switched to Sanka. There are coaches, absent parents, obnoxious patrons at fast-food joints.

“I wasn’t thinking I wasn’t going to do a movie that was different than all other youth movies or anything like that,” Heckerling says. “I can only do what I come up with or feel.” It’s really the “youth” that Heckerling mentions that make "Fast Times" different, the literal freshness of Crowe and Heckerling and their game cast of future superstars.

“'Fast Times' tested horribly,” Heckerling recalls of the advance previews major studios routinely do before releasing a film. “I showed the movie in Orange County, and it was unanimous. On all the cards, they said we were horrible Hollywood people making teenagers into sluts and druggies. And this is from young people—there were teenagers telling me this!”

"Risky Business," which came a year later, in ’83, covered similar ground—AIDS-age sexual terror and a good measure of values questioning: “Doesn’t anyone want to accomplish anything, or do we just want to make money?” This is the question that still baby-faced Tom Cruise’s Joel Goodsen, a suburban Illinois virgin bound for the Ivy League (or so he hopes), asks. “Make a lot of money,” comes the answer. Ironically, "Risky Business" is much artier and darker than "Fast Times," with a moody Tangerine Dream track, a surplus of fantasy sequences, and public sex (on a real train with the sultry Rebecca De Mornay), but it met with none of the grief that Heckerling’s film did. It became the surprise box-office smash of that year.

De Mornay’s call girl, Lana, can be seen as filling the same role as the Cat in Dr. Seuss’s beloved tale. Like the Cat in the Hat she creates havoc when the parents are away, jars a man-child out of his torpor, and exits just in time to leave everything safe and sound by the time the adults return.

"Risky Business" is also noteworthy for introducing an enduring Twee icon: the cool loser. John Belushi was dead by March of ’82.   “Slob comedies” were yielding fewer and fewer box office dividends and suddenly you had to actually be Ivy League bound, with your stellar book and record collection packed, in order to fill the sizable antihero void he left behind. Perhaps the greatest of these winning losers was Curtis Armstrong, who created a kind of icon of the form over the course of three seminal ’80s films, all of them Twee touchstones. “Sometimes you just gotta say ‘What the fuck,’” Armstrong’s Miles instructs Cruise’s Joel in the first,"Risky Business." “What the fuck gives you freedom. Freedom brings opportunity. Opportunity makes your future.” Here was a Situationist credo uttered by a teen (though Curtis Armstrong was pushing thirty when he made the movie)—and not only a “teen,” but also one with the same haircut that Bob Dylan wore on the cover of "Blonde on Blonde." His character gets into Harvard, while Joel’s is still sweating Princeton. This archetype of the loser who comes out on top would prove such a revelation to filmmakers, many of whom started out as nerds and geeks themselves, that Armstrong was typecast in the “Miles” role in two subsequent films and is probably singlehandedly responsible for Jack Black’s character in "High Fidelity."

“It started with 'Risky Business,'” Armstrong says. “Because 'Risky Business 'was so admired by other filmmakers, I was offered the Booger part in 'Revenge of the Nerds.' The character of Booger didn’t really exist on the page.”

If Mark Ratner’s locker-room fight with Damone (defending Stacy Hamilton-Jennifer Jason Leigh’s honor, of course) was the first shot in this transition from jock hero to Twee hero, "Revenge of the Nerds" was the riot. On the surface it’s a campus comedy, raunchy à la the bygone "Animal House" and the current "Porky’s" (one of the few franchises of the neo-slob comedy affairs), but at heart it’s a morality play with a cast of fine character actors (John Goodman, James Cromwell, "Fast Times" vet Anthony Edwards, Robert Carradine, and Ted McGinley) addressing major issues of civil rights. The titular nerds are turned away from every frat house on campus and forced to sleep in the gym because of the way they look and their interests (chess, computers, computers, chess). It is no coincidence that the only frat that will have them is Triple Lambda, a largely African-American fraternity “open to people of all races and creeds.”

“There’s a nerd sign burning on the lawn,” Armstrong points out, an echo of KKK burning crosses, “and all this dialogue about how nobody is free until nerds are free. If you go through the movie thinking about it in those terms, it’s clear what the writers were talking about—but be-cause it’s an exploitative movie and because it’s got a lot of broad humor in it, people sometimes miss the subject of the film, which is about bigotry, acceptance, and tolerance.” Continuing his proto-Twee rock-god throw-down, Armstrong appears in the final musical sequence in full Vegas Elvis garb with Anthony Edwards and Robert Carradine paying tribute to the aforementioned Devo. “We have news for the beautiful people,” Edwards’s character, Gilbert, says in his big monologue toward the film’s conclusion. “There are a lot more of us than there are of you.”

Adapted from "Twee: The Gentle Revolution in Music, Books, Television, Fashion and Film" by Marc Spitz. Published by It Books, a division of HarperCollins Publishers. Copyright 2014 by Marc Spitz. Reprinted with permission of the author and publisher. All rights reserved.