When nature fights back: How environmental disaster could swallow our cities

A Swedish town presents a case study for social displacement. But what happens when New York becomes uninhabitable? 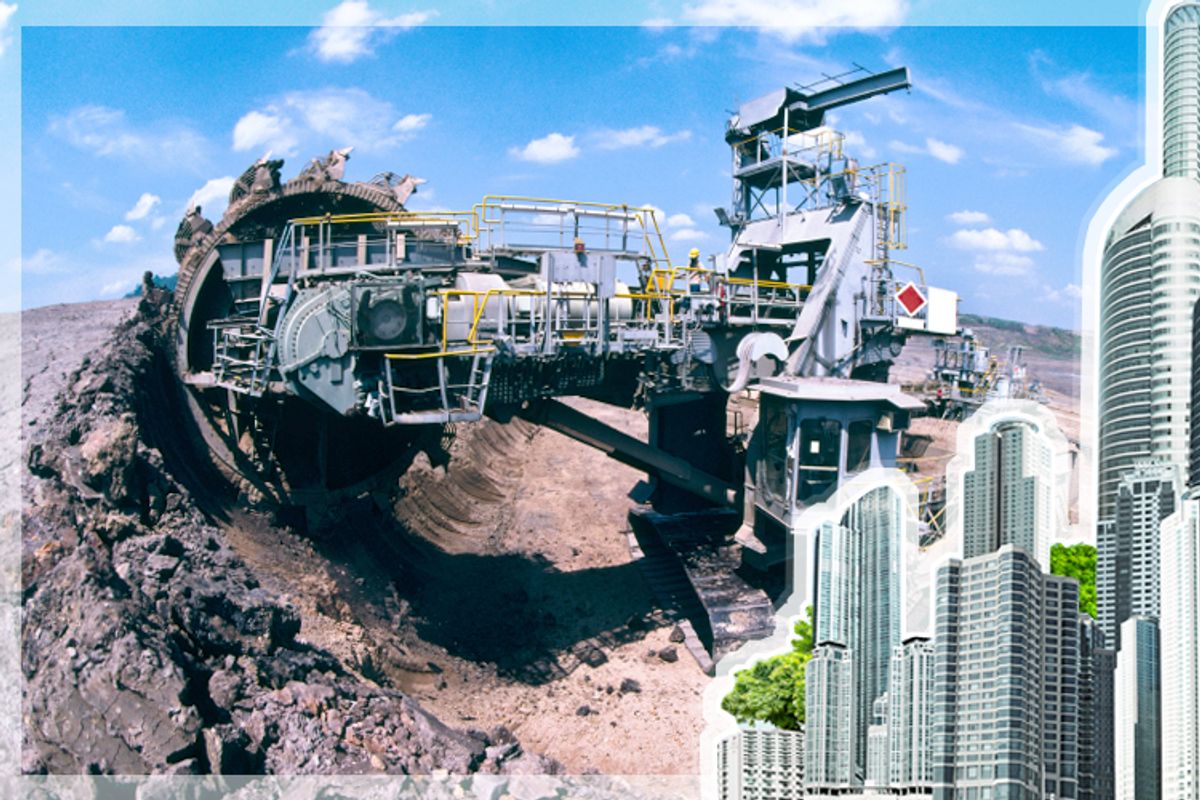 The iron ore mine in Kiruna, Sweden, is the largest in the world. Transposed over Manhattan, it would stretch from river to river, from Canal Street to Central Park South. But what makes the Kiruna mine extraordinary is its depth: By 2033, its shafts will descend nearly a mile below the earth.

That will be good for extracting iron, but bad for the town of Kiruna, which is perched in an increasingly perilous spot on the edge of the mine. In 2003, preparing for this expansion, the Swedish mining company Luossavaara-Kiirunavaara Aktiebolag (LKAB) discovered that the excavations had and would continue to destabilize the town of 18,000. Before long, Kiruna would slide into the pit.

Ten years ago, LKAB announced it would move Kiruna two miles to the east. The master plan, whose first phase was announced in May, outlines a 20-year project that will cost more than a billion dollars. But the movement of the city from west to east could last until 2100 if excavations progress.

Structurally and sociologically, the moving of Kiruna is a noteworthy ambition in its own right. But it’s also an important test case in a field that may be, unfortunately, about to explode. Sea level rise is accelerating. Kiruna won’t be the last town to be relocated.

Mikael Stenqvist, a partner at White Arkiketer and one of the lead architects on the Kiruna master plan, has likened it to the movement of a millipede. The town will crawl east across the tundra as it evolves into a dense, linear city linked by a gondola line. It will fold over itself.

The first phase of the project will require relocating Kiruna’s civic and commercial center. This is in part a matter of city-building wisdom — the eastern edge of today’s Kiruna will be the center of tomorrow’s Kiruna. But it’s also a matter of necessity, because Kiruna’s historic center is so close to the edge of the mine.

The first question that confronted the architects was what could literally be moved – and what should be demolished and rebuilt. Small buildings are easy to move, but cheaper to build. Big buildings cost more to build, but they are difficult to move.

In the years before the master plan was selected, there was talk of cutting Kiruna’s city hall into four pieces and rolling each one across town. Instead, a sleek, circular city hall called “the Crystal” and designed by the Danish firm Henning Larsen Architects will be completed in 2016. Along with a swimming pool, a library and a civic square, the Crystal will inaugurate new Kiruna.

But then what makes the new city the same as the old? White Arkiketer will pose a kind of architectural Theseus Paradox. “Our struggle now is to have as much possible be relocated,” Stenqvist told me. “We’re hoping that at least every block will have at least one full building located, and the rest of the buildings will hopefully have a lot of building materials from the old city.”

For example, he proposed, bricks from the old city hall could form the facade of a new school building, introducing memories of the old town into the new one. Other buildings – like Kiruna’s famous church, voted the most popular building in Sweden in 2001 — will be brought along in their entirety. This continuity, he hopes, will encourage residents to put up with the tumult of the transition.

The new Kiruna will incorporate parts of the old Kiruna, but it will also have the opportunity to correct its mistakes. For one thing, White hopes to repair mid-century urban planning mistakes that hollowed out Kiruna’s center. The new plan calls for a central square whose commercial life is concentrated in 300,000 square feet of retail space. The prospect of diversifying the town’s economy — Virgin Galactic has plans to build a spaceport here — is being considered in repairing what White says are “male-dominated spaces.” To make those spaces function, and to reduce dependency on cars and public transport, the new city will be denser.

Townsfolk have plenty of optimism about the possibilities for improvement. But practical hurdles abound. Three thousand homes will be relocated, in addition to new housing to replace what cannot be moved. Should blocks stay the same? Can neighbors request to be moved apart? Can friends from across town be placed together?

Homeowners, Stenqvist says, want to make sure their new homes (and lots) are the same size as their old ones. But in a denser city, that may not be possible. The mining company has proposed offering market price plus 25 percent. “That sounds good,” Sternqvist notes, “but it’s difficult to say what’s market price on the edge of a mine.” He reckons that LKAB will have to negotiate with every homeowner individually, a process that is just beginning now but is sure to be discussed at Kiruna dinner parties for many years.

Kiruna has three big advantages in this process. The first is an investment from LKAB that will probably exceed $50,000 per Kirunian by the time the dust has settled. The second is geographic: At 40 miles north of the Arctic Circle, Kiruna is an extremely isolated company town. Most residents will benefit from the mine’s continual expansion and few can live elsewhere. Finally, and perhaps most importantly, is the presence of secure, vacant land on the other side of town. You couldn’t really imagine a better set of conditions under which to relocate an environmentally threatened town.

In the United States, it typically takes a disaster – not merely the prospect of one – to force governments and homeowners into action. But the costs of rebuilding and the contents of scientific forecasts have begun to tip the balance toward proactive planning. The total value of properties in the coastal floodplain covered by the National Flood Insurance Program amounts to over half a trillion dollars. Two out of five Americans live in a coastal county. It is beginning to seem certain that conflict with the sea will define 21st-century life on the American coast.

The largest buyout efforts are underway in New York and New Jersey, where coastal areas were inundated by the tidal surge from Superstorm Sandy. But there have been similar programs in places like Nashville, Tennessee, which was hit by catastrophic flooding in 2010.

Strange though it may seem, that is the easy part. All you need to take apart at-risk communities is money. Putting them back together will require planning, and that’s where Kiruna can serve as an example.

“It can be a good example of a process both physically but also socially and politically of how to move a city,” said Sternqvist. How do church groups, book clubs, friends and families weather a city-wide shuffling of the deck? How much effort and money should be expended to preserve social ties forged over generations?

That’s a big question, because climate change isn’t just a tremendously expensive environmental nightmare. It will also create social upheaval on a scale that defies the imagination. The coastal U.S., like Kiruna, is fortunate in that it has the means and the knowledge to adapt, if it so chooses.

Most of the world won’t be so lucky.