"Game of Thrones" can't possibly have a satisfying ending 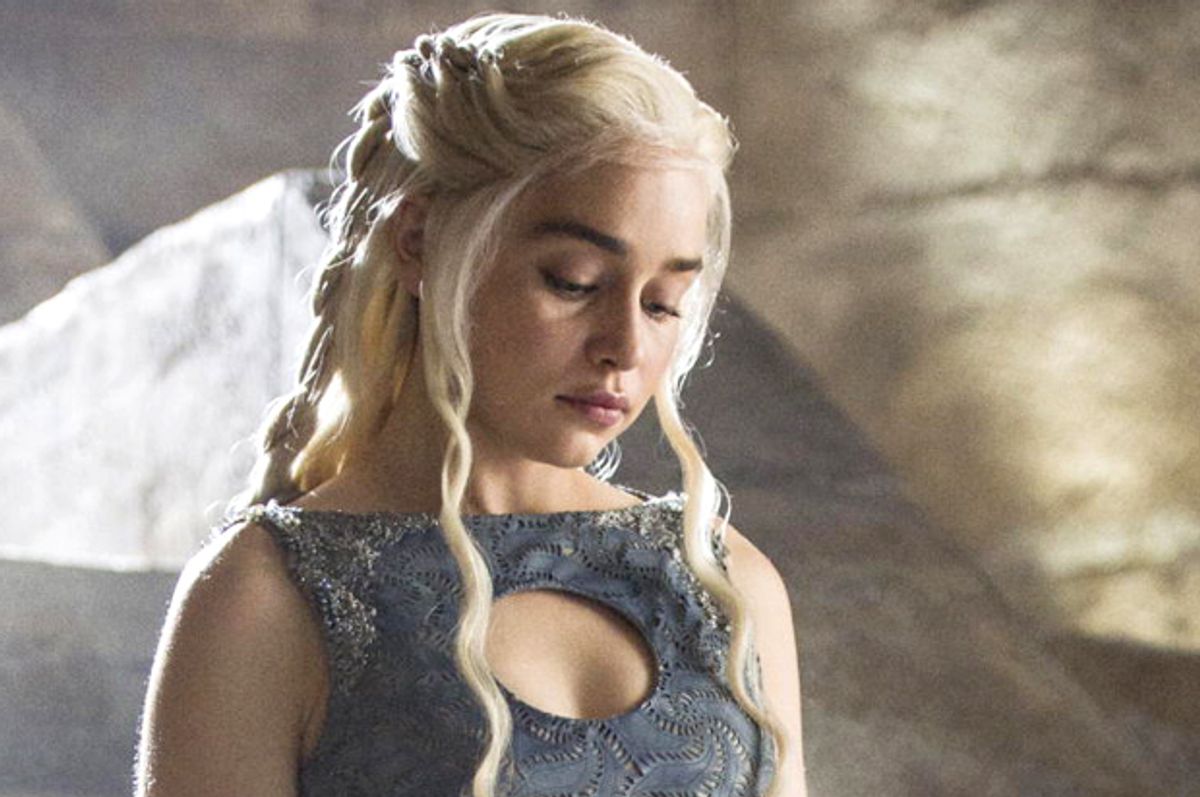 WARNING: The following article contains spoilers for the season 4 finale of "Game of Thrones," and liberal speculation about the show's future. Continue at your own risk.

"Game of Thrones" has been many things over the course its first four seasons: A tale of palace intrigue, a war story, a family tragedy, a high-fantasy hybrid. This doesn't always make it the easiest show to follow. Spanning two continents and featuring dozens of major characters, it can be hard to keep track of where exactly "Game of Thrones" is trying to go, or what exactly it's trying to be.

One thing that is abundantly clear -- even to casual viewers who have never read a word of the show's source material, "A Song of Ice and Fire" -- is that "Game of Thrones" is deeply concerned with the nature and application of power. Indeed, it's one of the show's greatest strengths. But it is also, it turns out, its biggest problem too, because based on everything Martin has taught us about power in "Game of Thrones," and based on the directions the narrative has taken, there aren't many satisfying ways this story could end.

While "Game of Thrones" isn't the first fantasy story to make power a central concern. (See: Tolkien, J.R.R., for the most obvious example.) Nor is it the first television show to do so. (See: "House of Cards," and also a million other things.) But what sets it apart -- what makes it different from anything else in popular culture today, and what makes it especially important -- is just how sophisticated its reckoning with power has become.

To get an idea of what I mean by that, first take a look at this Rolling Stone interview with series mastermind George R.R. Martin, in which he tries to distinguish his approach to the subject from that of J.R.R. Tolkien:

Ruling is hard. ["A Song of Ice and Fire"] was maybe my answer to Tolkien, whom, as much as I admire him, I do quibble with. "Lord of the Rings" had a very medieval philosophy: that if the king was a good man, the land would prosper. We look at real history and it's not that simple. Tolkien can say that Aragorn became king and reigned for a hundred years, and he was wise and good. But Tolkien doesn't ask the question: What was Aragorn's tax policy? Did he maintain a standing army? What did he do in times of flood and famine? And what about all these orcs? By the end of the war, Sauron is gone but all of the orcs aren't gone – they're in the mountains. Did Aragorn pursue a policy of systematic genocide and kill them? Even the little baby orcs, in their little orc cradles?

This over-simplicity isn't unique to Tolkien, and it isn't unique to fantasy. We see it everywhere. One of the worst offenders is "The West Wing," with its famously treacly iteration of "The Great Man Theory." A more cynical strain of the same underlying phenomenon is at work in shows like "Scandal" and "House of Cards."

Hell, even an award-winning cable drama like "Breaking Bad" has -- as its central organizing principle -- the transgressive brilliance of one man, Walter White.

But time and again, "Game of Thrones" has bucked that trend, asking the hard questions about the realities of power and the limits of individual initiative. It has done so incredibly well. (Often with nigh-demonic relish.) Over and over, we're reminded that power isn't something that just happens. Even if granted by birthright or decree, it can't be maintained that way indefinitely. Even if forged in the glory of war, it will only ever survive by a million different, often contradictory capitulations. Even if you have fire-breathing dragons at your disposal, all the dragons in the world won't keep power for you in the long run. All dragons do is burn things down.

(We're reminded as much in the Season 4 finale, "The Children," when Danaerys feels compelled to lock two of her three dragons in a crypt, lest they continue maiming and killing her new royal subjects. Weapons of war don't work especially well in peacetime, it turns out.)

Ruling effectively is really hard, precisely because power is so tricky. It's not something one person can handle or control, because power in "Game of Thrones" is of a decidedly constructivist bent. It's bound up in laws and institutions, tradition and superstition -- not to mention the sexual, gender and class politics on constant display.

"Power," as the enigmatic Varys puts it best in Season 3, "is what we make of it."

But, despite its ephemeral nature, power in some form is still essential to the functioning of society. In its absence, bad shit happens. Just think of the The North, which transformed almost overnight from a relatively peaceful (if oppressively somber) region, into the kind of place where people are literally being skinned alive.

What "Game of Thrones" does so well is draw out the contradictions of power. But it's actually almost too successful in that regard. Which is to say: it's hard to imagine, at this point, how the story could end in a way that feels truly appropriate for the world Martin has created.

Let's consider, for example, a conventional-sounding conclusion to "A Song of Ice and Fire," in which the people of Westeros band together, with some help from Danaerys and her dragons, to beat back the White Walker menace and install the benevolent and universally beloved Jon Snow on the Iron Throne.

As a simple matter of narrative consistency, such a conclusion would seem uncharacteristically sunny. (That is, coming from the same people who brought us this.) But plausibility aside, it still reveals something deeply problematic about the corner into which George R.R. Martin and his collaborators have painted themselves.

The first part of the problem is that any conclusion in which a new ruler is installed on the Iron Throne would feel like a disappointment. (Even a fan-favorite like Jon Snow.) Because any conclusion that allows for the survival of the current feudalist paradigm of the Seven Kingdoms would be egregiously, even criminally, inadequate.

It wouldn't just feel like weirdly muted way to resolve a fantasy epic with such a decidedly apocalyptic bent. (Although that's certainly part of the problem. We've been promised Götterdämmerung, and we're getting a management change? I don't think so.) It's also a problem because Martin has done such a thorough job of proving the intrinsic corruption of the Seven Kingdoms' system of government. It's not just broken right now. It will always be broken. One good king doesn't preclude the possibility of many more craven and violent ones in the future. That much has been borne out more than sufficiently by what we know about the history of this world.

The people of Westeros don't need a better king. What they need is a revolution.

And there's the second part of the problem, because even if a revolution were in order, that's still bad news for pretty much everybody. At the beginning of the series, Westeros might have been a deeply unfair place, but it was a deeply unfair place with certain things working in its favor -- like a landscape not ravaged by the vicissitudes of a brutal civil war. (Take a gander at the Wikipedia page for the Thirty Years War if you want a real-life example of what that kind of thing can do to a country.) Building a new and better society from scratch -- after not just a war, but the functional equivalent of a zombie apocalypse -- is bound to be painful at least, and downright impossible at worst. If Martin were to go this route, and to follow through with it in typical, unflinching style, then that's an awfully sobering way to wrap things up. Verging on nihilistic, even.

Of course, there are still two books left on the docket, and as many as four more seasons of television on the way. Many things can, and very possibly will, change in the story to make these misgivings seem totally irrelevant.

However "Game of Thrones" ultimately resolves itself four (five? six?) years down the road, what remains true is that through four mostly excellent seasons of television, it's managed to ask questions about power and sex and ambition that few if any other works of popular fiction have even considered. And that's something to celebrate.