Like suggesting the moon is "made of cheese": Watch Obama's amazing takedown of climate deniers

Highlights from the president's epic call to action 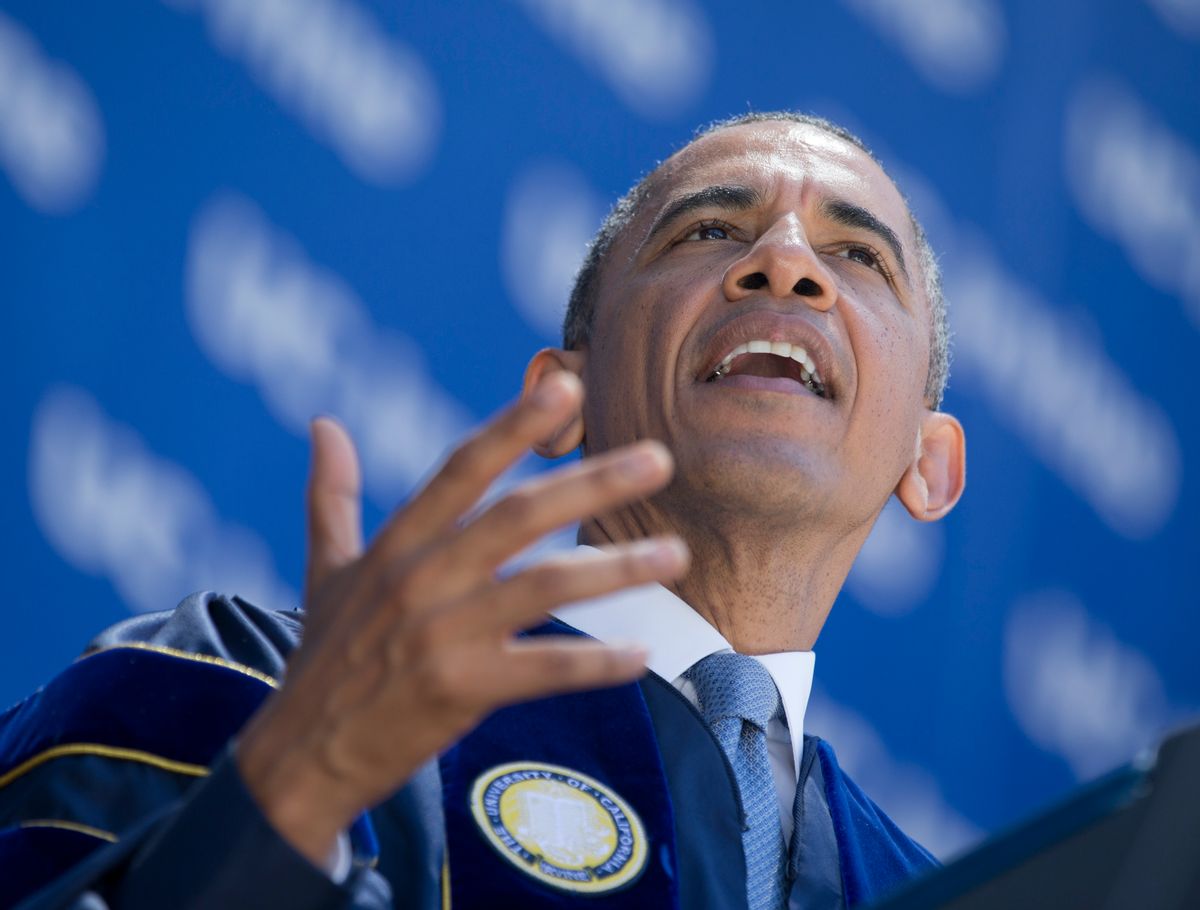 President Obama pulled few punches in the commencement address he delivered Saturday to University of California at Irvine's graduating class, calling climate deniers "a fairly serious threat to everybody's future" and, more profoundly, calling upon the next generation to step up and take action where their political system has failed them. The full speech was fairly epic, touching upon the major cultural and political factors standing in the way of climate action and underscoring the vital importance of moving past the bullshit once and for all.

"Even when our political system is consumed by small things, we are a people called to do big things," Obama told the Class of 2014. "And progress on climate change is a big thing ... Can you imagine a more worthy goal -- a more worthy legacy -- than protecting the world we leave to our children?"

On the anti-science lunacy of climate deniers:

"It's pretty rare that you'll encounter somebody who says the problem you're trying to solve simply doesn't exist. When President Kennedy set us on a course for the moon, there were a number of people who made a serious case that it wouldn't be worth it; it was going to be too expensive, it was going to be too hard, it would take too long. But nobody ignored the science. I don't remember anybody saying that the moon wasn't there or that it was made of cheese."

On the "not a scientist" meme:

"I'll translate that for you. What that really means is, 'I know that man-made climate change really is happening, but if I admit it, I'll be run out of town by a radical fringe that thinks climate science is a liberal plot, so I'm not going to admit it.'"

On Republicans' proud (and conveniently ignored) history of environmental action:

"The fact is, this should not be a partisan issue. After all, it was Republicans who used to lead the way on new ideas to protect our environment. It was Teddy Roosevelt who first pushed for our magnificent national parks. It was Richard Nixon who signed the Clean Air Act and opened the EPA. George H.W. Bush -- a wonderful man who at 90 just jumped out of a plane in a parachute -- said that 'human activities are changing the atmosphere in unexpected and unprecedented ways.' John McCain and other Republicans publicly supported free market-based cap-and-trade bills to slow carbon pollution just a few years ago -- before the Tea Party decided it was a massive threat to freedom and liberty."

On the need to turn the conversation away from pundits and back to scientists:

"Part of the challenge is that the media doesn't spend a lot of time covering climate change and letting average Americans know how it could impact our future. Now, the broadcast networks' nightly newscasts spend just a few minutes a month covering climate issues. On cable, the debate is usually between political pundits, not scientists. When we introduced those new anti-pollution standards a couple weeks ago, the instant reaction from Washington's political press wasn't about what it would mean for our planet; it was what would it mean for an election six months from now. And that kind of misses the point. Of course, they're not scientists, either."

On the positive-sum relationship between climate action and the economy:

"You can make a difference. And the sooner you do, the better -- not just for our climate, but for our economy. There's a reason that more than 700 businesses like Apple and Microsoft, and GM and Nike, Intel, Starbucks have declared that 'tackling climate change is one of America's greatest economic opportunities in the 21st century.' The country that seizes this opportunity first will lead the way. A low-carbon, clean energy economy can be an engine for growth and jobs for decades to come, and I want America to build that engine."

On America's role as a global leader in the fight against climate change:

"Developing countries are using more and more energy, and tens of millions of people are entering the global middle class, and they want to buy cars and refrigerators. So if we don't deal with this problem soon, we're going to be overwhelmed. These nations have some of the fastest-rising levels of carbon pollution. They're going to have to take action to meet this challenge. They're more vulnerable to the effects of climate change than we are. They've got even more to lose. But they're waiting to see what does America do. That's what the world does. It waits to watch us act. And when we do, they move. And I'm convinced that on this issue, when America proves what's possible, then they're going to join us."

And, because this was a commencement speech, some inspiring words on this generation's potential to enact significant change:

We need scientists to design new fuels. We need farmers to help grow them. We need engineers to invent new technologies. We need entrepreneurs to sell those technologies. (Applause.) We need workers to operate assembly lines that hum with high-tech, zero-carbon components. We need builders to hammer into place the foundations for a clean energy age. We need diplomats and businessmen and women, and Peace Corps volunteers to help developing nations skip past the dirty phase of development and transition to sustainable sources of energy.

In other words, we need you.

Check out the speech (which, as a bonus, features the president using the phrase "dinosaur flatulence") below: