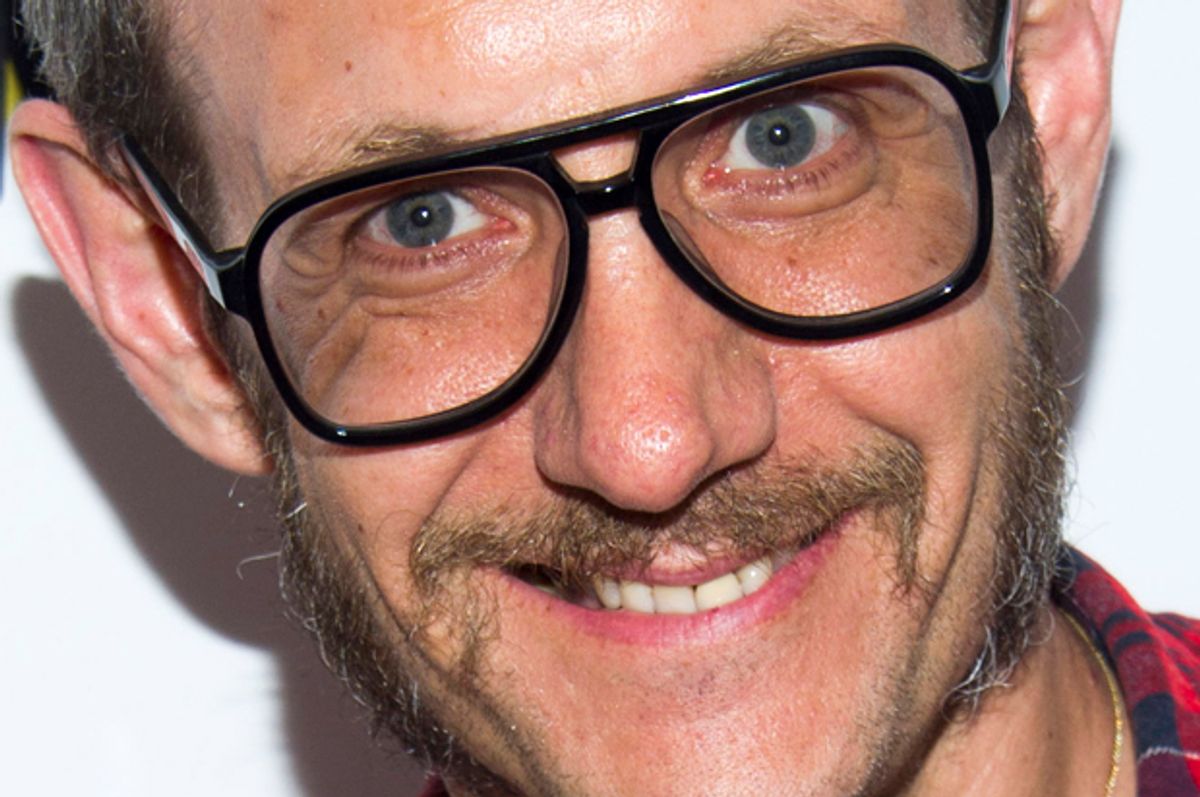 It isn't quite the piece of hagiography early rumors had made it out to be, but New York magazine's new and exhaustive profile of Terry Richardson is nevertheless undoubtedly the most sympathetic portrayal of the controversial photographer not written by Richardson himself in a long time. Yet it's precisely because writer Benjamin Wallace offers up a kinder, sadder vision of "Uncle Terry," the man who's faced a slew of accusations of sexually inappropriate behavior over the past several years, that the piece is so disturbing.

On the magazine cover, Richardson, tattooed and peering out of his trademark glasses, appears almost fragile as he rests his head on his arms. The headline asks, "Is Terry Richardson an Artist or a Predator?" – a question, as Elon Green pointed out Monday on Twitter, that is "strangely binary." The feature tellingly begins with the anecdote from last spring, of a model who said she'd received a sexually harassing message from a Facebook account allegedly from Richardson – a message New York describes as "clearly an impersonation." It sets the tone for the piece – a story in which a model made a mistake while Terry, poor Terry, is left to describe the Internet as "Like a little cancer. People can just do whatever they want."

Wallace's profile reveals the history of the man whose stark photos of celebrities like Lady Gaga and Miley Cyrus and naughty ad campaigns for luxury brands made him for a while an indispensable fixture in fashion. It reveals his "almost preposterously chaotic and unsupervised" childhood -- his photographer father, Bob, who ran off with a teenage Anjelica Houston when Terry was a toddler, and his mother, who had a brain-damaging car accident when Terry was 9. It details Terry's later attempts to work with his father until the elder Richardson descended too far into schizophrenia and homelessness. It glowingly describes him in his early career as "polite, humble, collaborative, fast—a pro" and "reflexively exuberant," while also acknowledging that "His shoots could get wild, and he made no secret of that," and revealing his former habit of "heavy" heroin use. He has a tattoo that says, "Smile now, cry later." That Terry. He's had a wild, rough road.

Four years ago, model Jamie Peck described a photo shoot in which "I'm not sure how he maneuvered me over to the couch, but at some point he strongly suggested I touch his terrifying penis … He was so darn friendly and happy about it all, and his assistants were so stoked on it as well, that I didn't want to be the killjoy in the room. My new fake friends would've been bummed if I'd said no. I must have said something about finals, because he told me, 'If you make me come, you get an A.' So I did! Pretty fast, I might add. All over my left hand. His assistant handed me a towel." Around the same time, model Rie Rasmussen told the New York Post, "He takes girls who are young, manipulates them to take their clothes off and takes pictures of them they will be ashamed of. They are too afraid to say no because their agency booked them on the job and are too young to stand up for themselves." The New York feature makes note of Richardson's controversies, but in a tone that's a little different. Sena Cech recalls a shoot when she was 19. "They wanted me to get naked," she says. "And they're like, 'Grab his dick and twist it and squeeze it really hard.'" Writer Wallace notes that "she laughs" now at the memory. There are also quotes from Richardson's assistant Alex Bolotow, who describes her collaborations with Richardson, including shots of her fellating him, by saying, "I remember being like, I'm just glad to be alive in a time when this is happening." The story meanwhile gently describes Rie Rasmussen as a model "displeased" with Richardson.

There are, to be fair, references to lawsuits "quietly settled" and some of the more vivid and troubling stories about the photographer, including Charlotte Waters' account from earlier this year of a session in which "He also straddled me and started jerking off on my face. He told me to keep my eyes open super wide." But the overwhelming image is of a man who grew up listening to his father banging Anjelica Huston in the next room and struggled with addiction, who now "meditates and attends AA meetings and exercises daily" but still "obviously misses the old Terry." It's a story Wallace suggests "hinges on a judgment of the power dynamic in any given photo shoot, and of the agency of young models in the moral vacuum of the fashion world," and one in which other women were clearly totally cool with how Uncle Terry operated. While acknowledging some of the more appalling accusations about Richardson, the implication seems to be that one must decide whether he's an artist or a predator – which, PS, no you don't – and that in order to judge him one must first understand the difficult and troubling circumstances from which he emerged. And I actually agree with that last part, because I think Terry Richardson is a manipulative creep who has spent his career getting away with grotesque sexual exploitation in an industry that cultivates it so magnificently. And by the way, just because sometimes consent has been enthusiastically given doesn't mean other people can't have a different experience. I also think manipulative, predatory creeps are human beings. They're not faceless monsters jumping out of the bushes. They're "artists" who allegedly surround young girls with the messages that "You’re awesome! You’re in the club!" if they behave and give you a hand job. Their whole game is about trust.

A few days ago, Jezebel wondered if the piece was to be "basically absolving" of Richardson, and maybe some degree of absolution was its intention. Yet I find it more damning than anything else out there written about him, because it shows a man of deeply arrested maturity, a man who lives in "always the same clothing, always the same pose in front of the camera, always the same sandwich." I don't find understanding some of the reasons someone might be selfish and unfeeling toward vulnerable women any excuse at all; I just find it, if anything, more compelling evidence of the credibility of his accusers. And when New York asks, "Artist or predator?" I'd say the answer is easy, and not binary at all. It's yes.