Tupac would have turned 43 today. In age of Trayvon and Jordan Davis, here's why we have a hard time letting him go 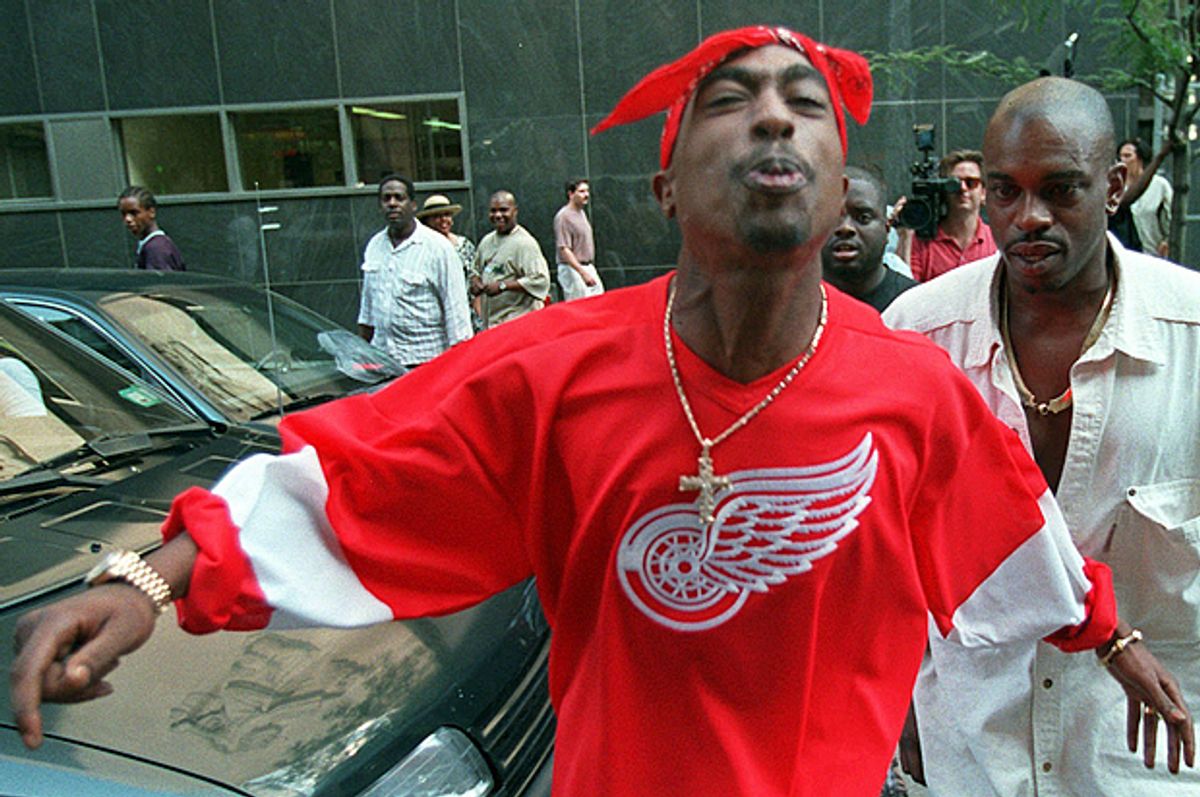 Tupac Shakur spits in the direction of reporters as he leaves state Supreme Court in New York, July 5, 1994. (AP/Bebeto Matthews)
--

Tupac Shakur lived for twenty-five years. I was nine years-old when he died and twenty-five seemed so grown to me. Twenty-five sounded like you had lived. It wasn’t until I started approaching twenty-five myself that I realized how close to black boyhood Tupac, born forty-three years ago to the day, was when he died.

I think that’s part of the reason we have a hard time letting him go. For all of his faults (and there were many), he continues to show up in our conspiracy theories and urban legends, as a hologram at Coachella and an inspiration on Broadway, in our art, our style, our memorials, our fantasies, and our histories because of what he represented. Tupac wasn’t the most impressive rapper. Only a diehard mourns the loss of his actual rhyme skills. But more than any other figure of that time, and probably since, Tupac articulated black boy rage in a way that was authentic, relatable, and easily translated to a nation determined to kill us. When he rapped, his vocal strain came directly from the gut, where he held his pain. He spoke with his entire body and you could damn near see the fury and anger pulsating just underneath his skin. Tupac screamed in America’s face on behalf of black boys in Brooklyn, Compton, Atlanta, Houston, St. Louis, Baltimore, Miami, and all over who had been terrorized by white supremacy.

Which is why reading this never-before-told account of his last words wasn’t the least bit shocking. In an article that appeared last month in Vegas Seven, a weekly publication about life in Las Vegas, Chris Carroll, now a retired police officer, told the story of what happened after Tupac was shot the night of September 7, 1996 and before he was taken to the hospital, in what would be his last moments of consciousness. Carroll was on bike patrol and responded to reports of a shooting. By his account, he was the last person to speak Tupac while he was alive. The interaction, in Carroll’s words:

“...So I’m looking at Tupac, and he’s trying to yell back at Suge, and I’m asking him, ‘Who shot you? What happened? Who did it?’ And he was just kind of ignoring me. He was making eye contact with me here and there, but he’s trying to yell at Suge. And I kept asking over and over, ‘Who did this? Who shot you?’ And he basically kept ignoring me. And then I saw in his face, in his movements, all of a sudden in the snap of a finger, he changed. And he went from struggling to speak, being noncooperative, to an ‘I’m at peace’ type of thing. Just like that.

“He went from fighting to ‘I can’t do it.’ And when he made that transition, he looked at me, and he’s looking right in my eyes. And that’s when I looked at him and said one more time, ‘Who shot you?’

“He looked at me and he took a breath to get the words out, and he opened his mouth, and I thought I was actually going to get some cooperation. And then the words came out:

We don’t get to script our own deaths. If we did, I’m sure black boys raised in America would be among the last on the list allowed to do so. I’m also sure that, if this story is true, Tupac wouldn’t have written it any other way.

He left this world serving the same type of black boy rage that animated his volatile public life. Carroll says part of the reason he waited so long to go public with his story is that he “didn’t want Tupac to be a martyr or hero because he told the cops ‘Fuck you.’” He may not have realized how much we needed this story now.

Not because we need any more fodder for the Tupac legend. He’s the most enigmatic figure hip-hop has produced; a charismatic, bold, untamed, contradictory, brilliant, troubled, sensitive, and aggressive man that left volumes upon volumes of work behind that has touched millions. The legend will take care of itself. We needed this story about Tupac now because a little black boy rage may soothe the wounds of the present.

We needed this because even though James Baldwin said “To be a Negro in this country and to be relatively conscious is to be in a rage almost all the time,” black boys are required to mute that rage as a means of survival. We live under constant threat of a racist police state that is all too eager to assault the bodies and psyches of black boys. Yet, we know all too well that one misstep -- a curt response, a defiant look, a subtle resistance to the dehumanization -- has the potential to end in death. We opt for survival.

The image of Tupac lying on the ground, his body weak from those three bullets, looking into the eyes of a police officer asking him “who shot you?” but his mind remembering all the injustices black boys like himself had faced at the hands of police in America, then taking a breath through a punctured lung just say “fuck you”... it’s the most poetic expression of black boy rage. It makes me wish Oscar, Trayvon, Jonathan, Ramarley, and Jordan all had the chance to write their own script and they all would choose for it to end the same way.

It’s a ubiquitous phrase, “fuck you.” I hear it in some form probably every day. But coming out of the mouth of a black boy and being aimed at a representative of the racist state, it feels almost revolutionary. It’s a small way of reclaiming some of the humanity that white supremacy has stolen. It won’t save us. Black boy rage has its limitations, and too often makes targets out of those who struggle right alongside us (namely black girls/women). But I won’t turn away from a well-placed “fuck you” to the system. Tupac sure didn’t.