The director of the Oscar-sweeping "Crash" tries to recapture lost magic with an odd, earnest 3-way love story 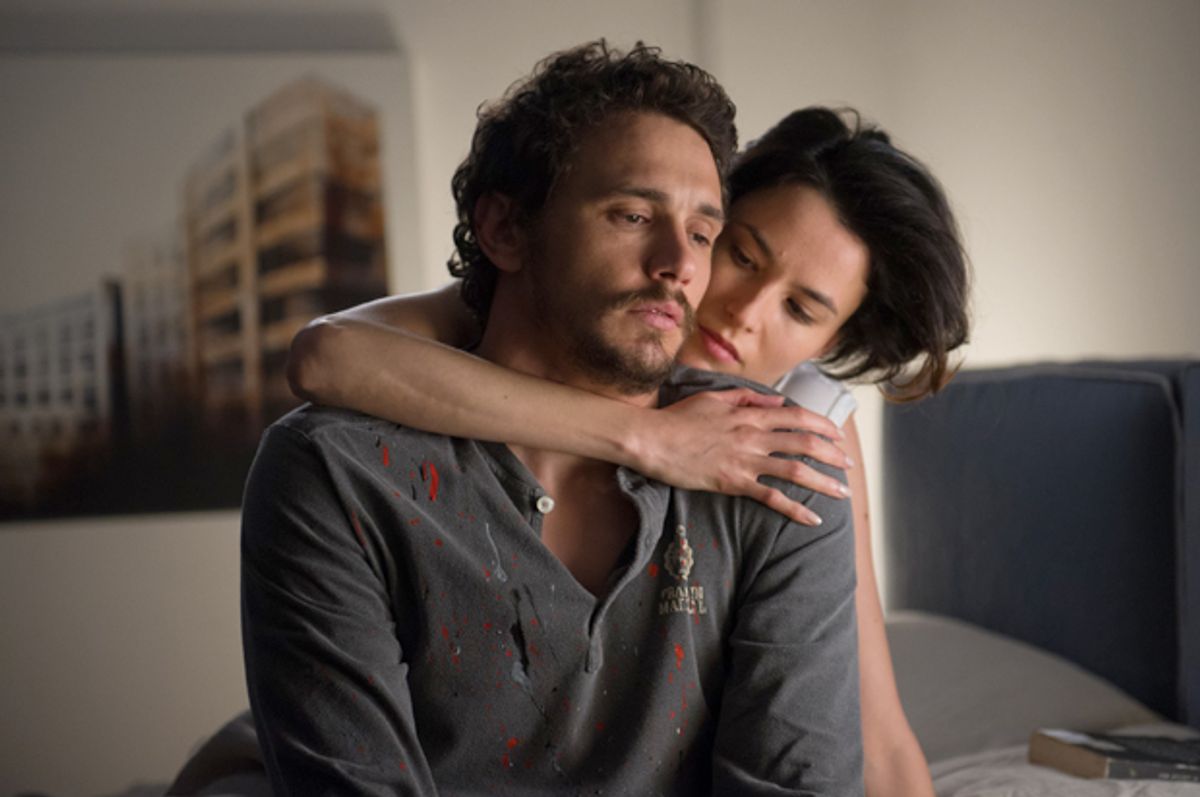 About midway through Paul Haggis’ new film “Third Person,” the main character, a Pulitzer-winning novelist played by Liam Neeson, gets some bad news. He’s holed up in a luxury hotel in Paris, the poor guy (unless it’s a luxury hotel in New York; this is a point of some confusion), boozing and carrying on a torrid affair with a limpid-eyed young acolyte played by Olivia Wilde. He’s also been pecking away at a new manuscript, drawn as always from his personal life, and when he meets his editor for a quick coffee, he gets some feedback. His first book was brave and ferocious, says the editor: “I sweated while I was proofreading it.” But the subsequent books have been getting weaker, and in this latest manuscript, the guy concludes, “You’ve got random characters making excuses for your life. I was embarrassed to read it.”

Haggis himself has also won the highest honors his profession has to offer – he became the first person to write and produce back-to-back best-picture winners in Oscar history, those being “Million Dollar Baby” in 2004 and “Crash” in 2005 – and then seemed to fade into the industry woodwork over the last decade. He shares other qualities with Neeson’s character, including a bumpy history of marriages and relationships, estrangement from his children and a professed weakness for churning all the events of his private life into his work. In case you think I’m engaging in untoward speculation, Haggis showed up in person at the New York screening I attended (somewhat unusual in itself) and delivered a monologue in which he compared “Third Person” to Antonioni’s “Blow-Up” and described it as “a confession of sorts.”

As for the movie, I appreciate the mechanical ingenuity of “Third Person” a lot more now that I’m not watching it. It’s a nifty construction – three parallel and sometimes interlocking love stories, each of them tricky in themselves – and even if you see some of its twists coming, you won’t see all of them. (It isn’t anything like “Blow-Up,” for good or for ill.) I suppose the title refers both to literary technique – third-person narration is an attempt to escape narrative solipsism – and the fact that each of the three narratives involves a triangle of sorts, with a third character mostly or entirely off-screen driving the actions of the others. The cast is loaded with famous names and faces: James Franco as a New York abstract painter and Mila Kunis as his dead-broke ex-wife, under investigation for doing something bad to their child; Adrien Brody as a sharp-dressed American businessman working the streets of Rome; Maria Bello and Kim Basinger in paired cameos as skinny ex-wives, chain-smoking their way toward the grave in purgatorial divorce-land.

“Third Person” has all the storytelling tricks and trademarks Haggis exploited so memorably in “Crash,” and I think the fairest thing to say is that if you were moved and changed by that movie, as many people evidently were, you should probably give this one a whirl as well. So we get a broken-hearted writer filling his lover’s room with white roses while she’s getting it on with somebody else, a crooked businessman sharing a moment of tender eroticism with the mysterious woman who’s probably fleecing him, and a tearful, ladies’-room bonding moment between a defeated ex-wife and her husband’s hot new girlfriend. Comparing “Third Person” to “Crash” is obviously problematic, since the latter film is possibly the most derided Oscar winner in Hollywood history, often cited by critics and cognoscenti as Exhibit A in the argument that academy voters are hopelessly shallow and sentimental. (The other nominees that year were “Brokeback Mountain,” “Capote,” “Good Night, and Good Luck” and “Munich.”)

Rather than replaying the question of whether “Crash” is any good, I think it’s more interesting to talk about why it has such a poor critical reputation, and why those who love the film – and they definitely exist – feel insulted and hurt by that response. If we take 20th-century critic Lionel Trilling’s famous discussion of the cultural poles of “sincerity” and “authenticity,” Paul Haggis skews hard toward passionate sincerity, toward saying what you really mean as opposed to expressing truth in all its complications. I’m sure Haggis believes he’s doing both after his own fashion (whatever I make of the guy, he’s a committed artisan), but the artificiality of his stories and the allegorical nature of his characters are right there on the surface. Dialogue and emotions are “on the nose,” as they say in story meetings, every scene is played for maximum interpersonal drama, and the entire edifice rests on a web of pseudo-Dickensian coincidences, reversals and revelations.

Trilling actually writes in favor of sincerity, at least as a personal attribute; he sees it as more trustworthy than authenticity, which rests on the unstable notion that each of us has a “true self” that is knowable and can be expressed. (While the appeal of both Bill Clinton and George W. Bush rested on authenticity – on the idea that they were “real” – Barack Obama is an intellectual with a bewildering personal history whose appeal rests on his perceived sincerity.) But he also understands that in the modern age sincerity can make us uncomfortable; it seems naive and naked and can resolve into a form of grotesque self-indulgence, as when the writer and director of a film uses a handsome movie star as his stand-in, wrapping him up in self-torment, room-service booze and the lithe body of a much younger lover who is mean to him. Sincerity, in short, can lead to random characters making excuses for your life.

In retrospect, Haggis is more than aware of the pitfalls of his narrative approach, both in this film and in “Crash,” which doesn’t mean he avoids them. I’ve heard critics, in conversation, say things like “Paul Haggis makes movies for people who never go to the movies.” There may be something in that, but there are two ways of evaluating that statement: Maybe Haggis relies on hammering symbolism, blatant message delivery and melodramatic trickery, and maybe those of us indoctrinated in the ways and means of modern cinema aren’t capable of appreciating his passionate sincerity. I can honestly see this both ways, and while I have no desire to sit through “Third Person” again, and found some of its dialogue acutely painful, it’s an ambitious and vivid failure that expresses a profound and genuine confusion about the nature of life and love.

These characters all have names, but Haggis almost shouldn’t have bothered.Their identities feel tacked-on and conditional, and we only get the most vestigial bits of biography. Pulitzer novelist Michael (Neeson) bangs away in that suspiciously expensive hotel room, and intermittently tries to keep Anna (Wilde), who’s trying to decide whether she loves him or not, from rushing off to her other older, married lover. (Whose identity is one of the story’s big shockeroos.) At one point Michael locks Anna in the hotel corridor stark naked, a courtship technique with which I was previously unfamiliar. Kunis’ penniless and unhappy character appears to work in the same hotel Michael and Anna are staying in, except that through some kind of magical-realist space-warp, her story unfolds in New York, not Paris. Kunis’ sad-sack efforts to retain custody of the son she may or may not have harmed is clearly the movie’s weakest strand, and Franco is especially wooden as her perennially bummed-out ex.

On the other hand, I quite enjoyed the mini-mystery of shady Yank operator Scott (Brody), who becomes infatuated with a Roma (aka Gypsy) woman called Monika (Moran Atias), whom he picks up one night in a dusty Roman bar. Or perhaps it’s the other way around; from the moment Monika accuses him of stealing money from her – supposedly the 5,000 euros she needs to buy her daughter from a trafficker – Scott understands he may be the mark in a long and expensive con game. Brody plays this dubious character wonderfully; Scott’s like a shark in the awed presence of a bigger shark, a guy who decides not to stop himself from betting everything on a single roll of a pair of loaded dice.

Paul Haggis’ personal life really isn’t your business or mine, or at least it wouldn’t be if he didn’t seem to be flinging it willfully in our faces in this movie. Haggis has been twice divorced (most recently since his public split with the Church of Scientology) and has lately been photographed at society events in L.A. in the company of a series of younger women. That’s entirely his own affair, but the fact that all three of the guys in “Third Person” are torn between their fading feelings for a discarded spouse and their passion for a hot but seemingly untrustworthy new companion feels like just a little too much revelation. Before that editor tells Michael that his book is crap, he mumbles some stuff about how the market has changed and they can’t sell this kind of stuff anymore. Haggis seems to have inoculated himself, in advance, against the likelihood that this painful, noble-spirited act of confession is not one that anybody wants to hear.