GOP's sad quest for an Obama scandal: No, the IRS flap is not like Watergate!

From Obamacare to IRS, the right is praying for a fatal Obama fall. But here's why there's still only one Watergate 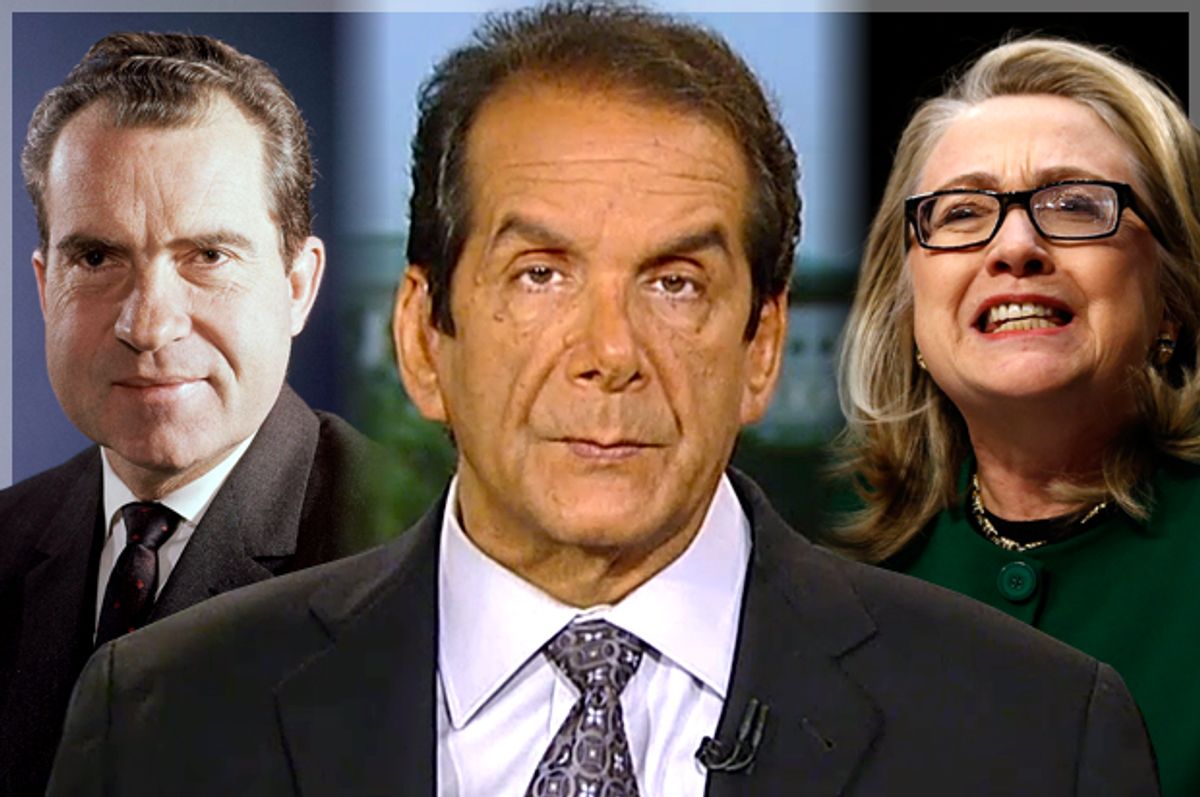 Over the weekend, interspersed between hysterical shrieking over Obama "losing Iraq" and more hysterical screeching over Bowe Bergdahl the traitor, yet another scandal managed to obsess the right-wing pundits across the TV spectrum:  the case of the "missing" IRS emails. For those who haven't been closely following this one, the basic elements are that in the wake of a bundle of confusing new rules governing tax-exempt political groups --- and the proliferation of political groups in general --- the IRS set forth a clumsy set of rules meant to scrutinize these groups to determine if they were eligible for tax-exempt status.

They used such keywords as "Tea Party," "Progressive" and "Occupy" to trigger a second look at the applications. In the end, the only group denied such status was progressive but that hasn't stopped the right wing from fulminating daily about this alleged political repression of average citizens and repeatedly subpoenaing IRS documents in a quest to prove that the White House directed the IRS to harass and intimidate the Tea Party.

Their delirium was stoked last Friday when the IRS revealed that despite the fact that they had located nearly 70,000 emails and would be turning them over to Congress, a computer crash had lost some of them from the period of 2009 to 2011. Chief IRS critic, Congressman Darrell Issa went ballistic.  He said, "Do they really expect the American people to believe that, after having withheld these emails for a year, they're just now realizing the most critical time period is missing? If there wasn't nefarious conduct that went much higher than Lois Lerner in the IRS targeting scandal, why are they playing these games?"

But it was Fox News' Charles Krauthammer's comment that introduced the meme that resonated:

Nixon was missing only 18 minutes. Lerner is missing two years. Nixon is a piker compared to this administration when it comes to concealment, hiding or pretending that they can't find stuff.

That's right. These lost emails are worse than Nixon's 18-minute gap. You remember that episode, right? And what the topic of the allegedly accidentally erased tape was?

The missing section of a 79-minute conversation between Mr Nixon and his Chief of Staff, H. R. “Bob” Haldeman, was erased deliberately.

It recorded a meeting on June 20, 1972, three days after operatives connected to the White House broke into the headquarters of the Democratic National Committee in the Watergate complex — a burglary that caused the scandal that destroyed Mr Nixon’s presidency.

The discovery of the gap was an explosive development during the Watergate investigations, convincing many that Mr Nixon or his aides had erased that portion of the tape because it incriminated the President in a cover-up.

As we know, subsequent tapes showed that he certainly was. And that wasn't all, was it? There was the attempted use of the IRS to punish individual political enemies. Here's how John Dean put it in a memo at the time:

This memorandum addresses the matter of how we can maximize the fact of our incumbency in dealing with persons known to be active in their opposition to our Administration; stated a bit more bluntly—how we can use the available federal machinery to screw our political enemies.

The right has been praying for a Democratic Watergate for years and they keep coming up short. It must be intensely frustrating that it always seems just out of their reach. But it's highly unlikely that anyone in that position will ever be crude enough to write something like that down --on email or anywhere else.

It's also interesting how soon these conservative commentators forget a more recent "missing email" scandal. Remember that time when the Bush White House couldn't provide years worth of emails from the office of the president and vice president involving Scooter Libby and kept it secret for years until it was finally forced to admit that the emails were destroyed and they hadn't kept a backup? Apparently Krauthammer and company forgot about that. (You'd think his colleague at Fox would remind him -- she was the presidential press secretary at the time and the official who finally admitted publicly that they didn't have the missing emails.) They also forgot about that time when the Bush administration couldn't turn over emails in the U.S. attorney scandal because they had failed to follow the law and conduct government business on government email servers and had instead used private RNC email addresses.

A videotape showing Pentagon officials' final interrogation of al-Qaeda suspect Jose Padilla is missing, raising questions about whether federal prosecutors have lost other recordings and evidence in the case...

Prosecutors and the Pentagon have said they cannot find the tape despite an intensive search.

But hey, that's nothing to the horror of a Tea Partyer having to fill out some extra tax forms.

Meanwhile, as the right fulminates over some missing IRS emails, it's clear that nobody is concerned about this:

At the time that the Central Intelligence Agency destroyed videotapes of the interrogations of operatives of Al Qaeda, a federal judge was still seeking information from Bush administration lawyers about the interrogation of one of those operatives, Abu Zubaydah, according to court documents made public on Wednesday.

The court documents, filed in the case of Zacarias Moussaoui, appear to contradict a statement last December by Gen. Michael V. Hayden, the C.I.A. director, that when the tapes were destroyed in November 2005 they had no relevance to any court proceeding, including Mr. Moussaoui's criminal trial.

Which brings us back to Nixon, the alleged "piker" who all the amnesiacs on the right seem to think did nothing on the level of the Obama administration losing some emails. Let's take one last trip down memory lane, shall we?

On December 22, 1974, with Nixon having resigned from the Watergate scandal, the New York Times' Seymour Hersh published a front-page blockbuster, headlined: "HUGE C.I.A. OPERATIONS REPORTED IN U.S. AGAINST ANTIWAR FORCES."

Hersh detailed how the CIA under Nixon hatched "an elaborate and secret domestic" spying operation built around illegal wiretapping and the reading of mail. Additionally, the Times confirmed "that intelligence files on at least 10,000 American citizens were maintained by a special unit of the CIA. "

The report sparked the creation of the Church Committee in Congress, which soon uncovered years worth of intelligence abuse inside the CIA, FBI and IRS, among others. Many of the abuses came at the request of the Nixon White House.

Lo and behold, 30 years later, in the wake of the Snowden revelations of another massive domestic intelligence operation sanctioned and directed by presidents of both parties, we have GOP congressmen calling for the NSA to give over its collected metadata on Lois Lerner, the former IRS chief who is accused of making political groups prove their tax-exempt status.

Congressman Steve Stockman said over the weekend, "I have asked NSA Director Rogers to send me all metadata his agency has collected on Lois Lerner’s email accounts for the period which the House sought records. The metadata will establish who Lerner contacted and when, which helps investigators determine the extent of illegal activity by the IRS.”

How convenient that it's all there in one place.