While you're glued to the World Cup, the planet is burning. Here are just a few conflicts worth monitoring 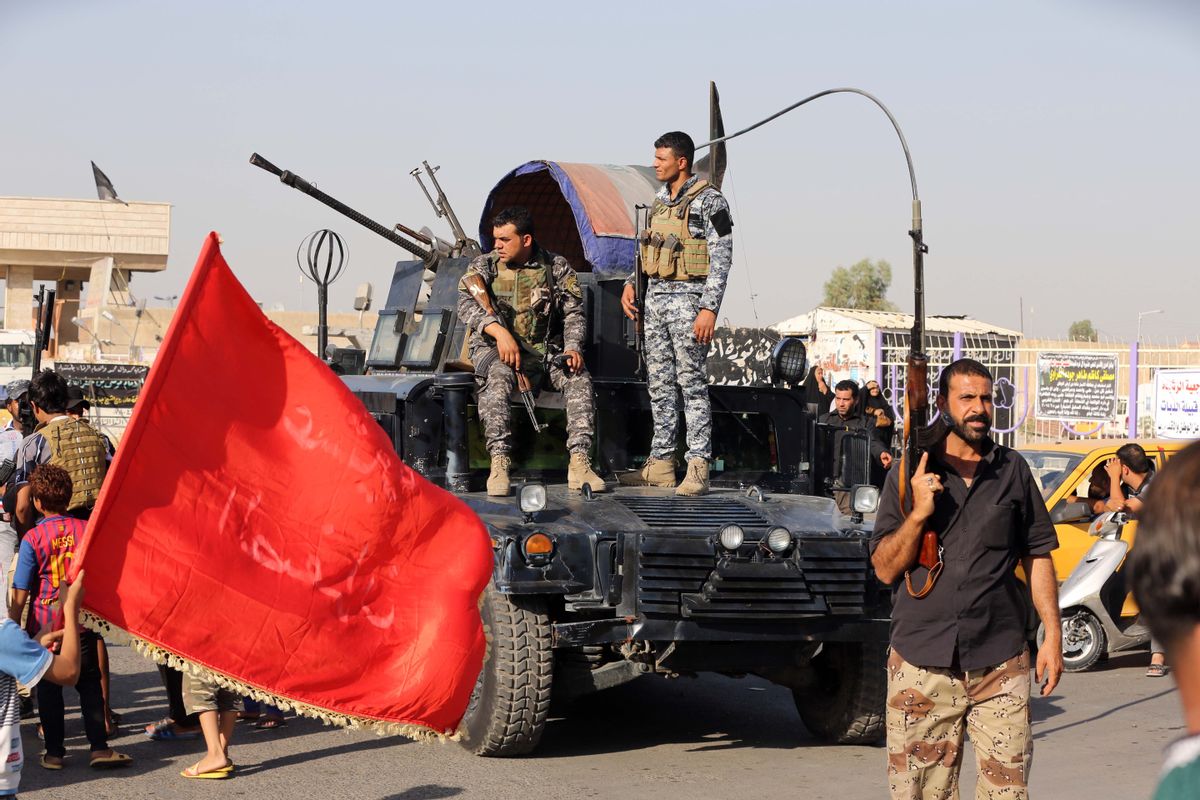 While you’ve been obsessing over who was unhappy at Kim Kardashian’s Florentine wedding or where Pitbull got his mom-capris in Brazil (I know, right?), some serious things have gone down in the real world.

Since many of you aren’t, perhaps, paying close attention to these troubling events here’s a handy guide to five major political crises happening across our happy planet.

You might want to bone up on a few of these.

1. Iraq and Syria: Two conflicts beat as one

The Middle East as you've known it no longer exists.

An Islamic militant group called the Islamic State of Iraq and the Levant (ISIL) this week raced across large parts of Iraq, taking Mosul and other Iraqi cities as its fighters marched, menacingly, toward Baghdad.

The group, which is so brutal that even Al Qaeda has disowned it, aims to establish a new Islamic caliphate in the region, much like what existed in the seventh and eighth centuries. Forward-looking, it is not.

This week’s lightning assault shocked analysts as well as the Iraqi government of Nouri al-Malaki, which has appealed to the United States for military assistance. “I don’t rule anything out,” President Barack Obama said, adding that Iraq has to solve its own problems.

But this crisis is a lot bigger than the tortured history of US-Iraq relations.

That’s because the wars in Iraq and Syria have merged into a single, bloody conflagration that has roots in Islam’s biggest split (Sunni v. Shia), while embroiling three of the Middle East’s most ancient ethnic and religious empires (Shiite Iran, Arab-Sunni Saudi Arabia, and Turkic-Sunni Muslim Turkey).

These combustible conflicts have existed in the region for centuries, of course.

But for decades they were checked by a variety of political factors — national boundaries imposed after World War I, the realpolitik of Cold War alliances, oil politics, the iron grip of brutal dictators.

The US war in Iraq ended the regime of Saddam Hussein, largely splitting this key Arab country into three large, and often competing, populations — Shiites, Sunnis and Kurds.

The Arab Spring then unleashed a wave of regional protest and political change, most notably in Egypt, the Middle East’s largest country and economy.

Syria’s civil war further destabilized the neighborhood, creating a bloody and chaotic backdrop for these historic conflicts to play out, and eventually, spill across national borders.

“This entire system is disintegrating like a house of cards that starts to collapse,” Lt. Gen. Benny Gantz said at a security conference in Israel this week.

No one can truly say how this violence will play out in the coming days and weeks, or whether the whole “house of cards” will indeed collapse.

But it’s reasonable to assume that this week's shocking developments are likely to be bad news for peace and prosperity not only in the Middle East, but around the world.

Oil prices surged to 2014 highs on Friday, as ISIL made gains in Iraq's oil-rich north. That may be just the start.

Political instability is one of the things that investors, business executives and others involved in the global economy fear most. And that’s doubly true for instability that’s rooted in violent religious conflict involving a global population of 1.6 billion people, and one that stretches back to the death of the Prophet Muhammad in the year 632.

That pretty much describes the Middle East today.

Of course, the Middle East doesn’t have a monopoly on conflict. It looks increasingly like the two most important economies in Asia could be headed in that very ugly direction.

The root of this Asian political crisis is economic in nature. Both China and Japan claim a chain of strategically placed islands in the East China Sea — the Diaouyu to the Chinese, the Senkaku to Japan.

The dispute is made worse by historic events and political slights, particularly Chinese complaints that Japan hasn’t properly atoned for its actions during World War II.

But it’s not just talk, or even mere national pride, at stake here. Japan has scrambled fighter jets against Chinese aircraft 415 times over the past year, while both country’s navies commonly patrol the same disputed area.

How long before one of these incidents turns into a deadly accident, and eventually, a real shooting war?

It’s been known to happen.

3. The rise of Europe’s far right

As any student of 20th-century Europe can tell you, the place doesn’t always shine during periods of economic peril.

Dark impulses have often followed desperate economic times on the continent, with horrific results: Nationalism. Demonization of immigrants. Persecution of Jews and other ethnic and religious groups.

To be fair, no one is predicting the return of Hitler or Mussolini. But some of those troubling impulses have returned and Europe’s political scene is changing. Fast.

The euro crisis has sparked a new wave of political radicalism, seen most recently in last month's European Parliament elections where more than a quarter of seats went to non-mainstream parties.

This is not a happy development for immigrants, gays, women and many other people across the world’s largest economic bloc.

4. Russia vs. Ukraine (and the rest of Europe): Back in the USSR?

Ukraine’s Euromaidan revolt and the subsequent Russian annexation of Crimea topped global headlines this spring. Today, the country has a new president (chocolate baron Petro Poroshenko), and the global news cycle has since returned to “normal.”

But don’t let that relative mainstream media quiet fool you: the Ukraine story rages on, particularly in the country’s east and particularly in other European countries (Poland, the Czech Republic, Belarus, Moldova, Estonia, Latvia, and Lithuania, to name a few) that worry about Vladimir Putin’s real political objectives.

Low-level, but still deadly, conflict continues in parts of eastern Ukraine, and Friday the country’s army claims to have destroyed two tanks and other vehicles it said had crossed the border from Russia.

Does Putin want to reconstitute the Soviet Union? Can he even do that? What could the West do about that anyway? What will the crisis do to Ukraine’s — and Europe’s — key natural gas supply routes and the economies that Russia now helps fuel?

Sure, it’s an American tradition to bash the bums in Washington, DC.

In the late 1960s, more than 70 percent of Americans trusted the federal government to "do what is right always or most of the time," according to Pew Research. Today that number stands below 20 percent.

This matters because government, for better or worse, is our society’s way to address many of the challenges that face this country, including all of the political crises on this list.

So while political infighting and partisan pique may be good for cable TV ratings, it’s not a positive development for the promotion of our national interests.

This goes beyond the obvious politicization of important (and complicated) issues, and the corresponding vitriol you hear every day on Fox News or MSNBC: “Benghazi!” “Bowe Bergdahl is a traitor! His father has a jihadi beard!” “Ben Bernanke is destroying America!” “The GOP is the KKK!”

The whole system of government in the US is built on trust — trust that leaders will lead, followers will follow, laws will be enacted and fairly enforced, government regulations will work to make a safer, happier and healthier country without harming economic opportunity.

And that also goes for the governments and investors around the world who lend the US money — trusting that, yes, we have a political system and economy that can pay them back with interest.

So it matters. As do the rest of the crises in this story.

To be sure, this depressing list of is hardly exhaustive. We could have easily added the ongoing fight over Iran’s nuclear program, North Korea's economic and political upheavals, Venezuela’s inequality-fueled protests, Egypt's ongoing revolution, religous violence and extremism across the Sahel, the spread of Boko Haram’s atrocities across Nigeria, Africa's largest economy. And, oh yeah, climate change that threatens all life on earth.

But we’ll spare you those unpleasant things for now.

Have a nice day.