A blockbuster for the "meta-blockbuster" age: What "Edge of Tomorrow" reveals about the sad state of action movies 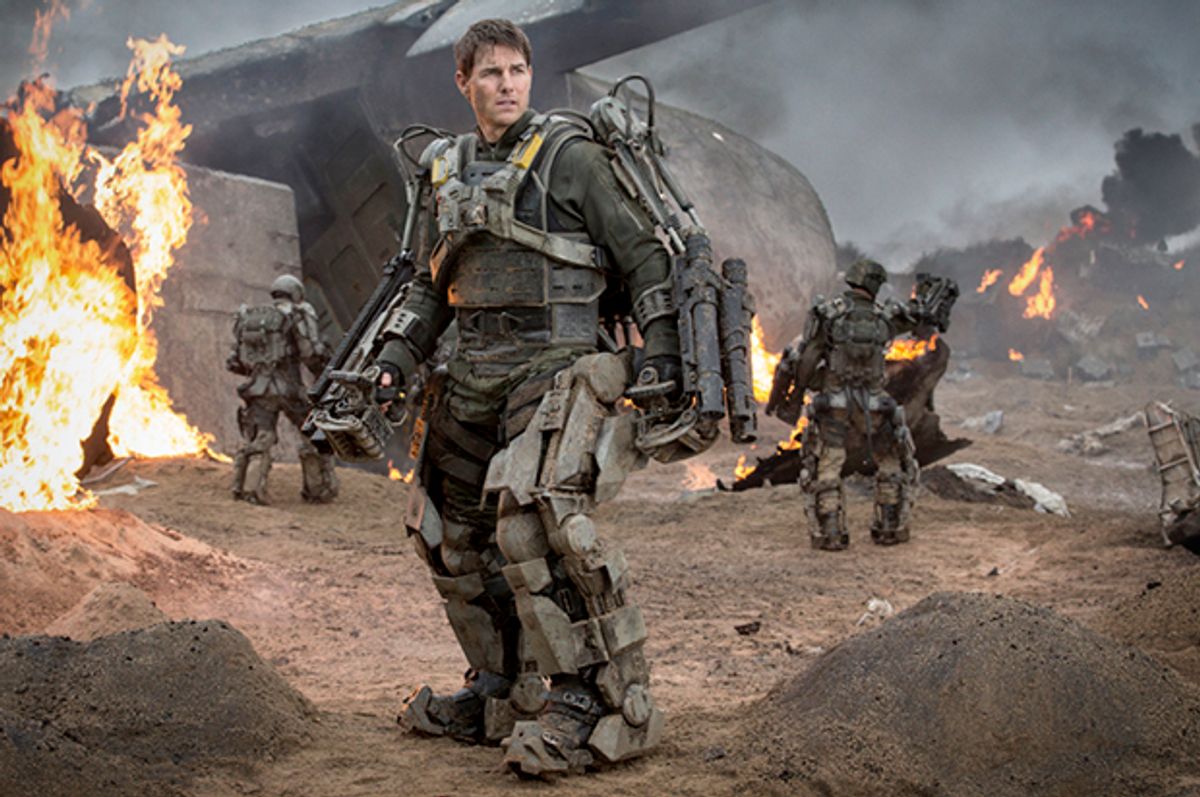 “I’m not a soldier, really.” That’s something Tom Cruise’s Bill Cage says very early on in “Edge of Tomorrow.” And, well, of course Tom Cruise is a soldier. We’ve seen him play all kinds of cocky action heroes over the years, and when his character in “Edge of Tomorrow” delivers the line with the smirk, we get the sense that it’s also Cruise’s smirk. Cruise knows full well that his character will soon be a soldier: In fact, an action hero in the exact archetype Cruise is known for playing, in a movie that spends a good portion of its running time dissecting the very idea of the blockbuster action film. Cruise’s smirk conveys a sort of irony — that he, a holdover from a bygone, purer notion of the action star — is a perfectly symbolic presence in a movie as self-aware as “Edge of Tomorrow.”

Since “Edge of Tomorrow” was released two week ago, there has been a common refrain in reviews: It’s like “Groundhog Day,” but with a sci-fi premise and far higher stakes. Cage is forced to repeat the same day over and over, dying in battle and then waking up again on that airbase. The other common analysis is that “Edge of Tomorrow” steals from the video game genre, and that’s true, too. Cage keeps fighting the Mimics and gaining experience that he retains even after death, as he returns to train again. But what seems most significant about the movie is how it plays out as a meta-commentary on the blockbuster genre overall.

The notion that our most popular movies and TV shows have begun to mimic video games is not a new one at this point. It’s easy to see the breakdown of level-like progression in plenty of action or adventure films, and even “Breaking Bad” was beginning to reflect the big boss battle at the end of each level in the way that Walter White found a new, darker, big villain to triumph over each season. But the repetitive, often comical way “Edge of Tomorrow” handles the idea of leveling-up — one of Cage’s deaths occurs when his timing is off and he gets run over by a truck while trying to bail on a military drill, the exact kind of stupid mistake you make in games — feels different. Plenty of action movies feature training montages and underdogs growing into heroes over the course of the story. But with “Edge of Tomorrow,” you watch the whole system repeatedly resetting itself. You see Tom Cruise die a lot, and in a whole variety of ways. In the first battle, he hardly gets a single shot out, as he is panicky and trying to turn the safety off on his weapon. By the end, he’s able to vanquish the Omega, the final boss, just as you knew he would. The movie makes you feel the whole slow process of character development: of building Cage into a hero.

But the film is willfully subverting these kinds of tropes. It wasn’t too long ago that Steven Spielberg and George Lucas predicted that if just a handful of the big blockbusters that the movie industry is so dependent on failed in one year, it could be violently disruptive for the whole system. Marvel might be basically printing money now, but other failures — like “John Carter” and “Lone Ranger” — were large enough that you could wonder if American audiences had actually become desensitized to the assembly-line nature of all these loud, destructive, but ultimately unmoving set pieces, numbed to seeing American cities razed again and again. You can only watch an apocalypse so many times before you get blasé about the end of the world and any poor bastard trying to stop it.

“Edge of Tomorrow” uses the video-game structure to hint at all of this. It’s a blockbuster interested in the question of how mind-numbing its genre has become to its viewers. In the sequence where Cage and Rita reach the farmhouse in the French countryside, Cage’s exo-suit loses power, and he simply steps out and walks on, leaving the useless husk behind him. It’s an image that’s stunning in a quiet and minor way, identifying the suit as an empty, faceless tool necessary only for creating the kind of formulaic hero we recognize.

This isn’t the first blockbuster of the season that felt like it was offering up a meta-commentary on the state of blockbusters. “Godzilla” also feels like a response to the recycled imagery and overplayed arcs of blockbuster action films. Gareth Edwards was fairly blunt about how, in his “Godzilla” reboot, he wanted to stave off the reveal of Godzilla, and Godzilla’s first major battle, for as long as he could. If you show the big monsters fighting at the halfway point, the confrontation at the end is a lot less climactic. And looking forward, Colin Trevorrow’s “Jurassic World” also seems poised to fit into the meta-blockbuster trend, premised on the idea that a dinosaur park can be perfectly banal (until, of course, everything goes wrong, as it always must in a “Jurassic Park” film).

In “Edge of Tomorrow,” the process of watching Cage become a typical action hero is also the process of watching Tom Cruise evolve into himself, and that alone lends “Edge of Tomorrow” a certain cleverness and weight. But though the public may be overstuffed on recurring blockbuster motifs, these action movies don’t seem to be going away any time soon: A fourth “Transformers” movie is about to hit theaters. So no matter how many apocalypse tales we’re told or how much gloom and doom Lucas and Spielberg dish out, there doesn’t seem to be any implosion going on in the industry. At least “Edge of Tomorrow,” while driving toward its predictable conclusion, manages to subvert established ideas about the action movie itself.