Adios, Dov Charney and George Will! 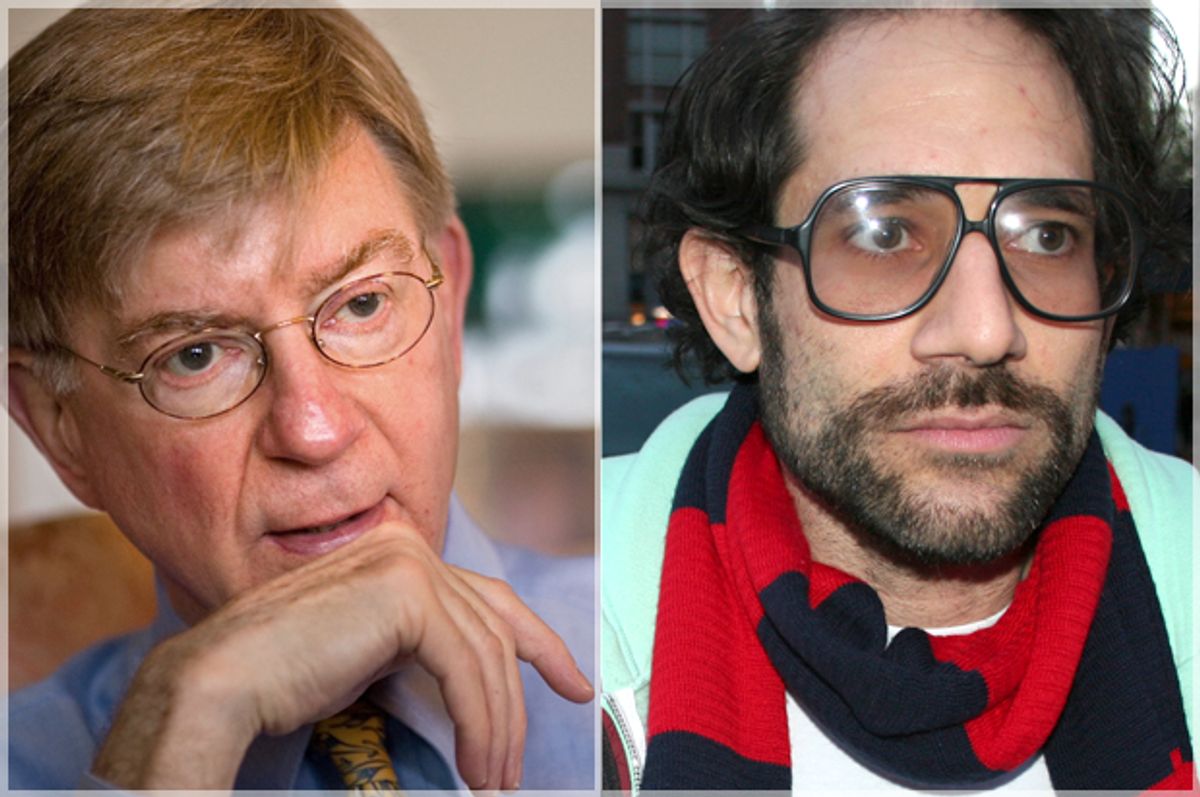 We did it, everybody! We cured sexism! OK, maybe not. But this week, the world became an ever so slightly less hospitable place for men with less than stellar track records toward women.

On Wednesday, American Apparel's board of directors ousted its controversial founder and CEO Dov Charney, explaining that the decision "grew out of an ongoing investigation into alleged misconduct." The financially troubled  company has added that it has "notified him of its intent to terminate his employment as President and CEO for cause."

Charney has long battled accusations of inappropriate behavior and flat-out harassment for years. A decade ago, Claudine Ko wrote a profile of him for Jane that featured more than one episode of Charney "putting on a show" of a sexual nature in front of her. Charney has a history of unfortunate commentary on women and has been sued by former employees for sexual harassment and "creating what some women said was a sexually charged, hostile environment" multiple times in the past 10 years, including two high-profile suits in 2011. In one case, a 19-year-old aspiring model who had worked at one of the chain's New York stores "claimed that Mr. Charney, wrapped in a towel, invited her to his bedroom to talk about a job. Once there, she said he undressed her and tried to have sex." The company at the time stood by Charney, who favors the word "slut" around the workplace, calling the legal actions a "shakedown." Two years ago, he was also accused of  "choking and rubbing dirt into the face of a former Malibu store manager," allegedly calling him "a wannabe Jew" and a "fag."

Charney, who "has said he often holds meetings in his bedroom," has long avoided any damaging consequences for his alleged behavior. But the company's new co-chairman Allan Mayer told the L.A. Times Wednesday that American Apparel has been investigating Charney since earlier this year, when "new information came to light." A source tells the L.A. Times that the hinted-at cause "involved his personal conduct with women and poor judgment." And Mayer added, "We take no joy in this, but the board felt it was the right thing to do." That's OK, there are plenty of other people who've been repulsed at the allegations against Charney for 10 years now willing to step up and take joy in this, even if the board of your hideous, jeggings-peddling brand doesn't.

And as long as we're busting out "Hit the Road, Jack," let's sing a chorus for George Will. While American Apparel was parting ways with Dov Charney, Wednesday also saw the announcement from the St. Louis Post-Dispatch that it is ending its longtime relationship with columnist George Will, replacing him with Washington Post columnist Michael Gerson. In a letter from editorial page editor Tony Messenger, Messenger explained, "The change has been under consideration for several months, but a column published June 5, in which Mr. Will suggested that sexual assault victims on college campuses enjoy a privileged status, made the decision easier. The column was offensive and inaccurate; we apologize for publishing it." Messenger was referring to an already infamous piece of blather from the 73-year-old professional sexist bemoaning that when colleges "make victimhood a coveted status that confers privileges, victims proliferate." A month earlier, Will had dismissed the #bringbackourgirls movement as "an exercise in self-esteem."

The exact nature of what led American Apparel to decide it had no choice but to punt Dov Charney has yet to be revealed, and one newspaper apologizing for and then dropping George Will does not mean he still doesn’t have a big platform. But it does send the message that things are changing, and that it's getting a little harder out there to be so cavalier and straight-up gross around women. At your powerful, high-profile job. It's a small victory, but you know what? We'll take it. And see you around, fellas.