The real Honey Boo Boo: What reality TV did to the pint-size pageant queen

I was at the recent "Tonight Show" taping where Fallon interviewed Honey Boo Boo, and I couldn't believe what I saw 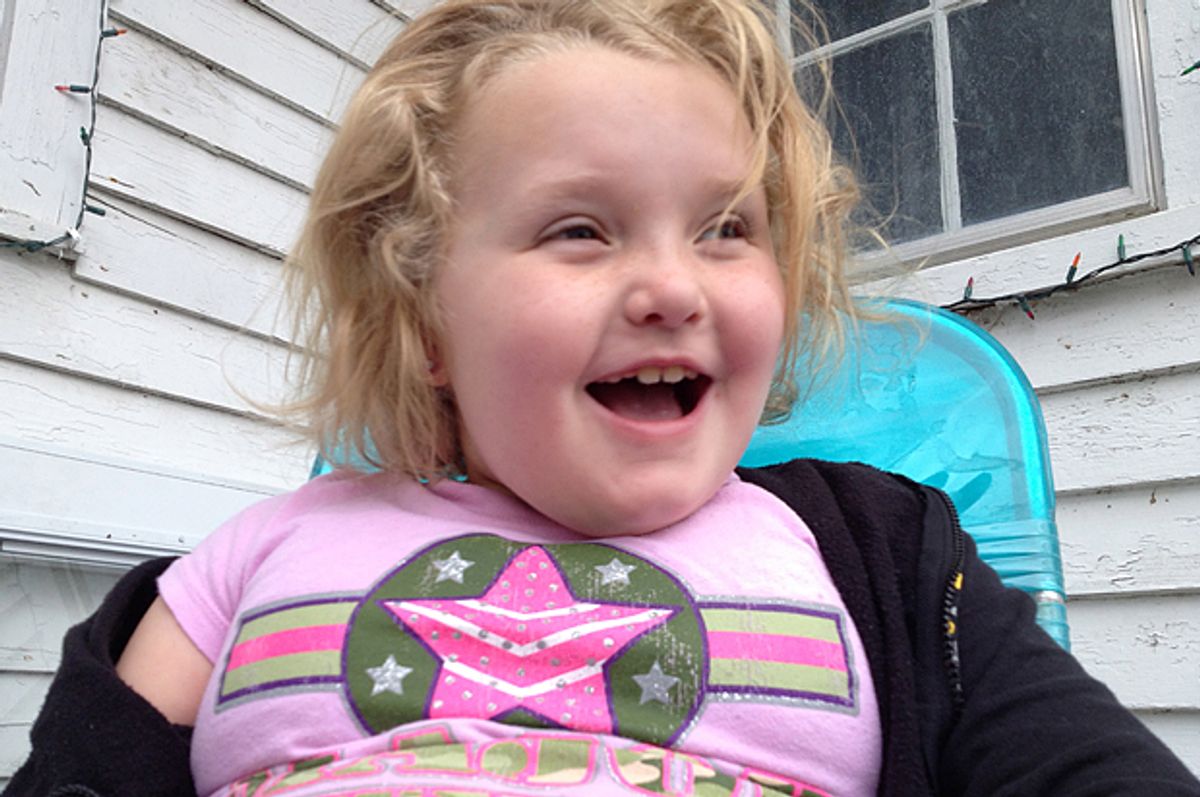 A few nights ago,  “Toddlers & Tiaras” legend and walking meme Honey Boo Boo graced the stage of studio 6B in Rockefeller Center. Nine-year-old reality TV star Alana Thompson wore an elegantly understated rhinestone leopard print top paired with a matching leopard print skirt. After a quick handshake with host Jimmy Fallon, she chided him for having cold hands. When he asked for a friendship bracelet, she denied him. When he playfully showed off his muscles, she told him, “That’s nothing.” They shared some laughs, and the interview ended with Alana teaching Jimmy a few cheerleading moves. Pretty standard.

If you were watching at home, Honey Boo Boo’s “Tonight Show” appearance was most likely just what you have come to expect from the pint-size pageant queen. She was bubbly, brazen and bouncy. Sure, there were points where she was toeing that fine line between cute and annoying. Overall, though, I imagine her publicist was pleased.

But for the record, what aired on NBC was only part of the madness that went down last Wednesday at “The Tonight Show.” I know this because I was there, and from where I was sitting, Honey Boo Boo — let’s not mince words — was a tiny, dimpled monster.

I ended up at the taping because a friend scored me a last-minute ticket. Even though I tend to have a general distaste for the whole process of live tapings (full disclosure: I used to work in the audience department of a daytime talk show), attending felt like an obvious choice when I saw the lineup: Honey Boo Boo, her mother, Mama June, and none other than legendary broadcast journalist Barbara Walters. There was something intriguing to me about this combination, like dipping a macaron into Cheeto dust. I couldn’t resist.

When I arrived at Rockefeller Center, they placed us in lines, herded us around like sheep being led to the slaughter, and sorted us discreetly in order of how attractive we were. (It’s the way the business works.)

Once we were seated, the warm-up comic did some engaging crowd work, the Roots began to play, Jimmy Fallon delivered his monologue, and later chatted with Barbara Walters, who was just wonderful. Suddenly, despite my jaded experience with live tapings, I found myself swept away in the magic of it all. There I was watching “The Tonight Show” with Jimmy Fallon on a show that had once been home to the likes of Steve Allen, Jack Paar, and Johnny Carson. In that moment, I remembered that television could be a thing of great depth, heritage and meaning.

And then Honey Boo Boo entered. When she first walked out onto the stage, my immediate thought was -- of course. Of course she is swinging her arms like that and wearing that leopard print outfit. Of course.

Suddenly I found myself a little bit star-struck. There, before my very eyes, stood Honey Boo Boo – the star of almost all of my favorite GIFs (such as this one, this one and this one). It was one thing to watch this girl strut around on her reality show, “Here Comes Honey Boo Boo,” but it was another thing entirely to see her strut in-person. It was almost like watching a cartoon come to life.

It should be noted that a good portion of the interview was cut down for the broadcast, mostly, I’m sure, for the sake of time. Still, the interview I watched on television that evening felt nothing like it had in the studio. Many of the major beats were there -- Alana telling Fallon that he wasn’t so big and bad, the point where she refused to give him a friendship bracelet -- but the broadcast left out all of the eerie tension.

For example, the friendship bracelet moment seems cute and quick on TV, but in person, it was actually kind of agonizing. It didn’t just happen once, but several times, and the more it was discussed, the more openly hostile Boo Boo became. And in addition to the friendship bracelet crisis, the episode left out some deeply uncomfortable spats between Mama June and Alana. You see it a bit in the broadcast, but Mama June was continually either answering questions on behalf of Boo Boo or mumbling answers to her. The quick wit we’ve come to expect from Honey Boo Boo was nowhere to be seen, but instead it was fed to her by her pageant mom. The scene reminded me of the cringe-worthy “Today" show interview with Kate Gosselin and her twin daughters, Mady and Cara – the one where the 13-year-old girls fell silent when asked if they were doing OK.

But the most notable moment to be left out of Honey Boo Boo’s appearance on “The Tonight Show” was when she became so fed up that she actually struck Mama June. Up until this point, Fallon had been doing a great job of navigating Alana’s weird behavior, but it was at this moment when he became positively awesome. “NEVER hit your mother!” he exclaimed, in a voice that was serious with just a hint of a joke, and the studio audience erupted in applause. Finally, we thought, someone is addressing this child’s attitude.

But really, it’s television, so instead of getting a timeout for hitting her mom, Alana was handed pompoms and asked to lead the audience in a cheer. We reluctantly played along for Jimmy’s sake, but it felt strange, like we were giving her some kind of reward for her behavior.

When I watched the episode that night and I saw how much had been cut out, it made me wonder how much of Alana’s life is itself left on the cutting-room floor. Where do the producers of “Toddlers & Tiaras” or “Here Comes Honey Boo Boo” have to draw the line? There must come a point where they say: This is not good TV, it’s just sad. Let’s cut it.

So this edited version of Honey Boo Boo becomes what we celebrate. We laugh at this kid with the funny catchphrases, the quirky dances, the affinity for go-go juice, but I suspect that she might not actually exist. The Honey Boo Boo we know is a compilation of shticky moments in what has clearly been a strange, tough childhood. The Alana I saw on "The Tonight Show" set was visibly troubled: disrespectful, defiant, entitled. Of course, with a bit of editing, “disrespectful” becomes “precocious,” “defiant” becomes “sassy,” and “entitled” becomes “confident.”

And these are the words Alana hears people using to describe her. Surely, she watches the fictional version of herself on television, and like any child, she is able to suspend her disbelief and imagine that she really is the spritely cutie on the screen. The truth is, she’s growing up, about to enter puberty, one of the most confusing periods of human existence. She is not the spunky little cherub running around in pink dresses anymore, or at least she shouldn’t be. But this is what we’ve come to expect from her, and the reality-TV-industrial-complex wants her to keep on delivering it.

The version of Honey Boo Boo who America fell for is not completely fabricated. There is certainly a well of creativity, exuberance, and talent in that child. But watching that “Tonight Show” taping, I couldn’t help wishing she had the chance to develop these traits without the whole world waiting for her to turn to the camera and say: