5 extreme acts of greed that screw the American people

Most egregious? U.S. wealth grew by $25 trillion in the recovery, but 90 percent of us got absolutely none of it 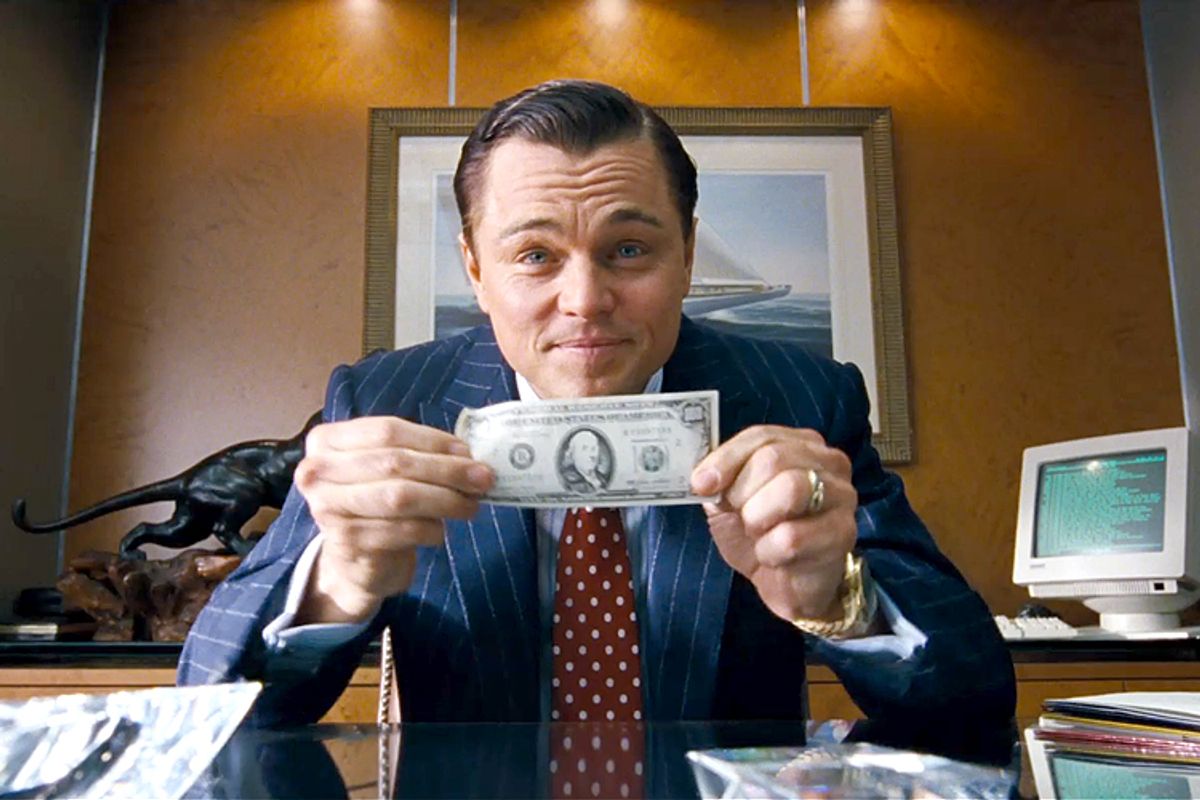 The trading volume on the Chicago Mercantile Exchange (CME) reached an incomprehensible $1 quadrillion in notional value in 2012. That's a thousand trillion dollars. In comparison, the entire U.S. GDP is $17 trillion.

On that quadrillion dollars of sales CME imposes transfer fees, contract fees, brokerage fees, Globex fees, clearing fees, and contract surcharges, many of them on both the buyer's and seller's side. As a result, the company had a profit margin higher than any of the top 100 companies in the nation from 2008 to 2010, and it's gotten even higher since then.

But not a penny in sales tax for the taxpayers who provide publicly-funded infrastructure, technology, systems of law, and security to help them process billions of financial transactions.

Instead -- incredibly -- CME complained that its taxes were too high, and they demanded and received an $85 million tax break from the State of Illinois.

2. A Single Tax-Avoider Made More Money in 2013 Than ALL the Emergency Responders in the U.S.

Warren Buffett watched his net worth grow by $12 billion in one year, much more than the $8.3 billion our country spends on almost a quarter-million Emergency Medical Technicians and Paramedics.

Meanwhile, his company, Berkshire Hathaway, hasn't been paying its taxes. According to the New York Post, "the company openly admits that it owes back taxes since as long ago as 2002." A review of Berkshire Hathaway's annual report confirms that despite profits of almost $29 billion in 2013, a $395 million refund was claimed, while $57 billion in federal taxes remain deferred on the company's balance sheet.

Berkshire Hathaway does report an income tax expense. But all of it, in the company's own words, is hypothetical.

It gets worse. In addition to Walmart's $19 billion in U.S. profits last year, the four Walton siblings together made about $29 billion from their personal investments. That's over $33,000 per U.S. employee in profits and family stock gains. Yet they pay their 1.4 million American employees so little that the average Walmart worker depends on about $4,000 per year in taxpayer assistance, for food stamps and other safety net programs.

How does Walmart spend its profits? Instead of providing a living wage for its workers, company management spent $7.6 billion, or about $5,000 per U.S. employee, on stock buybacks, in order to further boost the value of their stock holdings.

U.S. wealth grew from $47 trillion to $72 trillion in the four years after the recession, largely as a reflection of continued American productivity. In other words, a full one-third of the total wealth in the U.S. in 2013 was generated since 2009. But the richest 10% took all of it.

That's $6 trillion per year in new wealth for the rich. In contrast, the total annual cost of 'entitlements' and the safety net is less than $2 trillion.

One consequence of this redistribution of wealth is that more money has been transferred from minorities to prosperous white Americans. The richest 1% took 95 percent of the gain. Less than two out of every hundred individuals in the richest 1% are black.

5. Extreme Fees: Nickeled and Dimed until the Retirement Fund is Almost Gone

The one- to two-percent fees don't seem like much, but savvy financial minds know better. It has been estimated that the average underserved household spends $2,412 each year just on interest and fees for alternative financial services. Food stamp recipients have to pay companies like JP Morgan to process their benefits. The unemployed are getting their benefits through banks who issue fee-laden debit cards instead of cash. And it's not just low-income households paying the fees. A two-earner household with median incomes will pay an average of over $150,000 in 401(k) fees over their lifetimes.

The fees are not only draining us individually, but also at the levels of local and state government. Los Angeles last year spent more on Wall Street fees than it did on its streets. In Detroit, financial expenses might approach a half billion dollars, in a city where homeowners can barely afford the water services. Chicago may end up paying Morgan Stanley $9.58 billion for a $1.15 billion parking meter deal. And in Rhode Island, it has been projected that the state will pay $2.1 billion in fees to hedge funds, private-equity funds and venture-capital funds over twenty years, the same amount the state will be taking from workers by freezing their cost of living adjustments.

All these issues have solutions: a wealth tax for (1) and (4) above; a minimum wage increase for (2); a speculation tax for (3); public banksand Post Office banks for (5).