APNewsBreak: Threats bring Afghan girl back to US 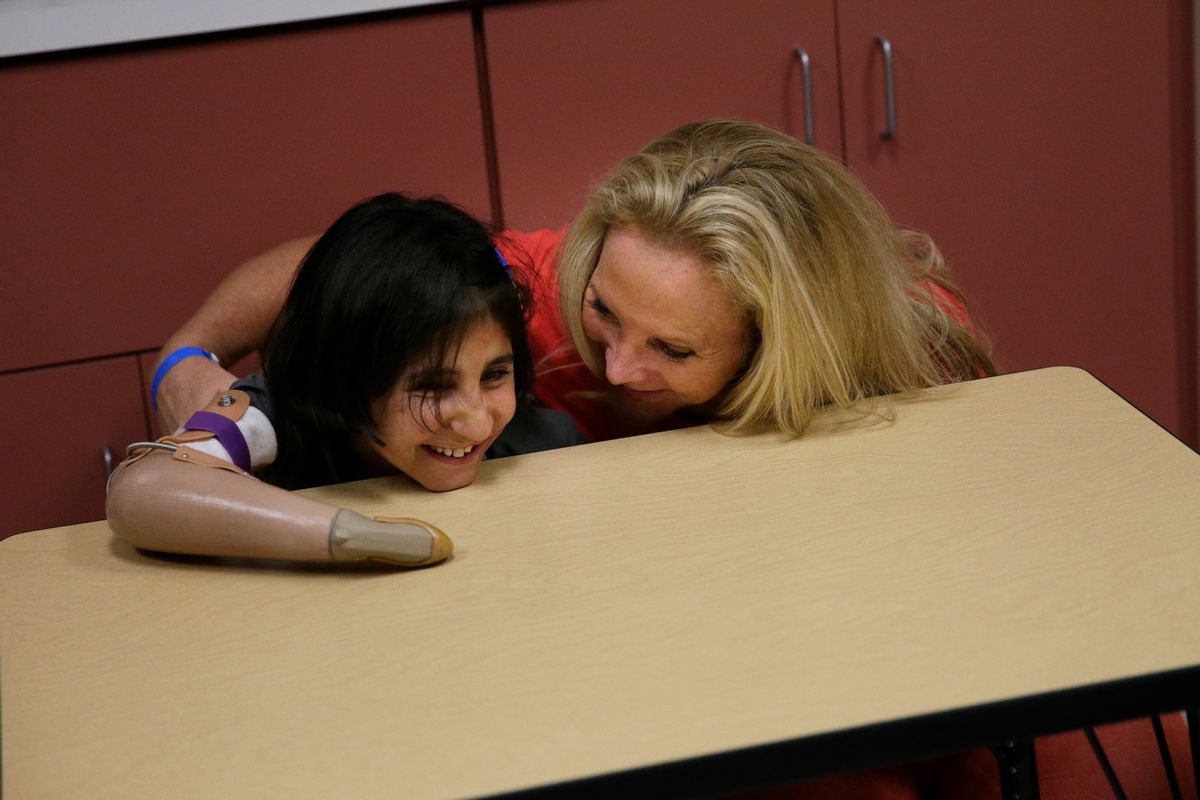 Shah Bibi Tarakhail, a six-year-old Afghan girl whose love of painting won the hearts of U.S. doctors who fitted her with a prosthetic, is tickled by her host mother, Ann Drummond, at Shriners Hospital for Children on Thursday, June 19, 2014, in Los Angeles. Shah Bibi Tarakhail, who lost her right arm and right eye when she picked up a grenade following a firefight between U.S. and Taliban forces in her village near the Pakistan border, returned to the United States on Thursday, after the group that sponsored her first visit said it learned her newfound celebrity made her a subject of death threats at home. (AP Photo/Jae C. Hong) (AP)
--

LOS ANGELES (AP) — When the art-loving little girl from Afghanistan left Los Angeles last April, her American friends sent her away with brushes, an iPad filled with photo souvenirs and a head full of ideas for painting pretty pictures like the one she created with the new prosthetic arm they had just given her.

But while word of the colorful abstract expressionist work Shah Bibi Tarakhail had painted won the 6-year-old widespread praise and even an invitation to visit the Picasso Museum in Spain, it also aroused the wrath of the Taliban.

Word quickly spread to her family that she would be killed for adopting Western ways, and the family fled its small home on the Pakistani border.

On Thursday, with just the clothes on her back and a small bag containing a pink party dress and other items, Shah Bibi returned to Los Angeles. While her family remains in hiding somewhere in the Afghan-Pakistan region, the nonprofit group Children of War is placing her with a host family for the next several months. Eventually the group hopes to win her political asylum in the United States.

"When she went back, the minute she got there she became a target," said Dr. Arsalan Darmal, a Newport Beach psychologist who treated her during her earlier U.S. visit and has remained in touch with her family.

"If she stayed," added Darmal, who helped get her out, "she knew she was going to be killed."

Although Children of War has rescued more than 100 youngsters, including many with grievous war injuries like Shah Bibi's, her case quickly gained international attention. It was an outpouring of admiration fueled both by her plucky if shy personality and her love of art.

She'd lost her right eye and most of her right arm last summer when she mistook a discarded grenade outside her home for a rock, and it exploded, ripping her body with shrapnel and killing her brother. But it couldn't kill her zest for life.

As soon as she learned how to use the prosthetic arm doctors at Shriners Hospital For Children fitted her with, she began drawing. Children of War, learning of her interest, arranged a painting lesson with prominent abstract expressionist Davyd Whaley, who said he was astounded by her skill at matching colors.

"She kind of has a facility for it if she wants to pursue it," he told The Associated Press.

After Galerie Michael in Beverly Hills showed her work around, she received the invitation from Spain.

Meanwhile, she and her family had gone into hiding.

She arrived at Los Angeles International Airport on Thursday after a perilous three-day bus ride that took her and her father to Kabul from Pakistan days after the father had called Children of War to appeal for help.

"Her father said, 'I can't care for her anymore and it's at a point where she needs to be out of here sooner rather than later,'" said the group's executive director, Amel Najjar.

He told Children of War he had placed Shah Bibi in a Pakistani hospital for several days, partly to have her treated for stress and depression and also just to keep her safe.

In Los Angeles, she had a joyful reunion with several of the people at Shriner's Hospital who had previously helped her. In the weeks ahead, doctors will fit her with a prosthetic eye and work on removing the scars the shrapnel from the grenade left on her body.

"You remember me?" occupational therapist Vivian Yip asked as Shah Bibi rushed to embrace her.

Soon Yip had her demonstrating her skill with the prosthetic by stringing yarn through children's blocks, then cutting poster paper into a perfect circle and drawing a happy face on it.

"Thank you," she said in English, cocking her head and smiling sheepishly when someone praised her work.

Later, when asked of all the places she's seen in the world, which one she likes the best, she switched to Farsi.

"I like it here,'" Children of War volunteer Walid Amini quickly translated.