The end of an era: Juicy Couture winds down 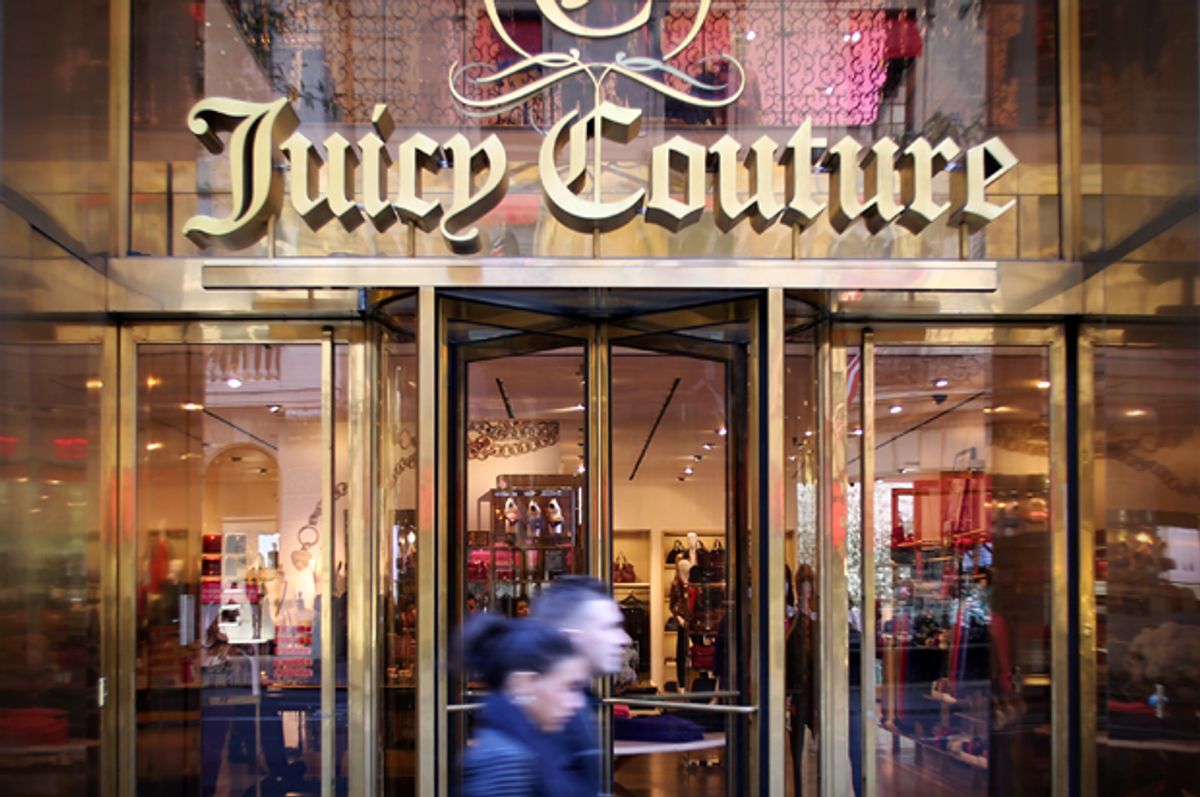 Let the early 2000s nostalgia commence: Juicy Couture, the brand that made dressing like a Boca Raton retirement community resident fashionable and having words written across your butt somehow socially acceptable, has fallen upon hard times.

As Racked reported earlier this week, the once terrifyingly ubiquitous brand is closing all of its U.S. stores at the end of the month. Sources on Juicy's home planet – L.A. -- told Racked that several locations have already gone belly up, and those that are still open are offering sales of up to 70 percent off everything. Not only that, but the company's recently announced collaboration with shoe brand Steve Madden – snarkily described by Racked this month as "your early aughts dream come true" – will reportedly only be available internationally.

The company – much like those once iconic, expensive, yet one-step-away-from-a-Snuggie brands Lululemon and American Apparel  -- has seen better financial days. Last fall its parent company Kate Spade & Co. sold it to American Brands Group, a decade after its founders Gela Nash-Taylor and Pamela Skaist-Levy sold it off to Liz Claiborne for a reported "$56 million, with a $200 million earn-out." Back then, you couldn't walk down an exclusive, expensive street without thinking you'd stumbled into the King of Prussia Mall, in an era when velvety, brightly colored tracksuits, preferably teamed with a pair of Uggs, were a totally legitimate fashion choice whether you were Jennifer Aniston or that Parliaments-smoking cat lady who lives down the hall. "We have a weirdly large demographic," Nash-Taylor once said, "from kids to 65-year-olds." As the Guardian fondly recalled this week, for her wedding to Kevin Federline, Britney Spears' bridal party donned Juicy tracksuits emblazoned with "Pimps" and "Maids." Was there ever such an unflattering fashion trend so enthusiastically embraced by people who actually had enough money to not look like they roll their hair in orange juice cans?

Nash-Taylor and Skaist-Levy are still in the biz – they released a business-themed memoir called "The Glitter Plan" last month and two years ago launched a new label, Pam & Gela. Style.com reports that their collection of "leopard-print French terry sweatsuits, top-and-skirt sets in tie-dyed velour, backless hoodies, and kicky little ruffled dresses in Liberty prints" sold briskly last season. If the phrase "leopard-print French terry sweatsuit" doesn't give you The Fear, rest assured that based on their recent items like a $225 terry cloth strapless romper, I'd say their commitment to fug remains hardcore.

I confess that now that I'm in my 40s, I may have picked a bad time for the sartorial equivalent of pajamas as outwear -- a look that says, "I have run out of effs to give, world" -- to go out of fashion. Guess it's pants with zippers for a little while longer, everybody! Like Paris Hilton-based reality shows and flip phones and Trent Lott and duets featuring Nelly, Juicy was part of a unique and frankly baffling even for its time moment, and that moment is over. And though it may seem hard to believe right now, someday, I promise, we're all going to look back on galaxy pants and laugh too.