Former veep is trying to rewrite history on Iraq. But as Rand Paul demonstrates, that's not going to work so well 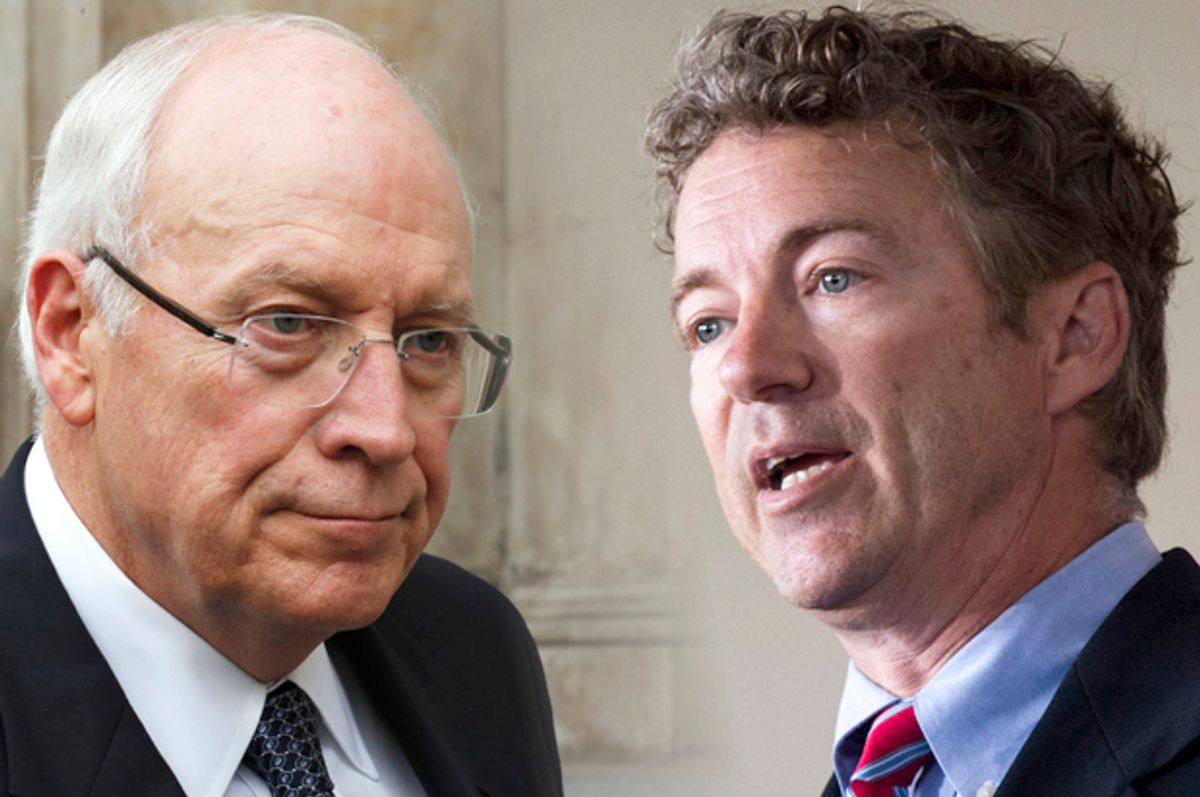 Everyone on the left or who now thinks the Iraq War was a terrible idea -- as in, "most people" -- had a good larf last week when fearsome father-daughter legion of doom Dick and Liz Cheney trolled the world with their Wall Street Journal Op-Ed on "the collapsing Obama doctrine." That the opinion editors not only kept the line "rarely has a U.S. president been so wrong about so much at the expense of so many" but made it a sub-headline indicates that they were in on the joke, too. Good work, all around.

But was the Cheneys' only goal to provide a day's worth of chuckles for the left? There's an argument to be made that the Op-Ed and concurrent establishment of a political nonprofit, the Alliance for a Stronger America, are more an effort to tilt the GOP back toward Bush-Cheney-style military intervention.

As Philip Bump wrote in the Washington Post, "Creating a (c)(4) almost certainly means that the Cheneys aren't just hoping for a vehicle for more newspaper op/eds; instead, they want to be able to build a war chest to influence the direction of political decision-making." He goes on to note that Rand Paul, the first name that comes to mind among less-interventionist prospective GOP presidential candidates, has personally been critical of Cheney over the Iraq War and is polling the highest in early surveys of the presidential field.

"The Republican that has most strongly opposed Dick Cheney," Bump writes, "is currently the most likely Republican to earn the party's nomination for president." Early polls are early polls, of course. But if Paul is able to stay in the hunt for the nomination once primaries begin, expect to see groups like the Alliance for a Stronger America dumping cash to nudge the party back into its war-all-the-time comfort zone.

Paul seems to get that the Cheneys' P.R. push isn't about giving liberals another chance to mock them, but about steering the party back into a recklessly hawkish seam. At least with Iraq, though, Paul understands that this isn't much of a battle: Defending the Iraq War or calling for a new round of intervention in Iraq is a complete political loser not just among Democrats, but among Republicans, too. And the lingering unpopularity of the Iraq saga played into Paul's feisty response to Cheney on "Meet the Press" yesterday.

Paul's foreign policy has been something of a muddle as he considers a run for the presidency. He doesn't want to abandon his libertarian, non-interventionist base, but he also doesn't want to alienate traditionally hawkish segments of the party. Typically what comes out are awkward, incoherent hedges. But on Iraq? He knows well enough that on this issue, there's no need to split the middle -- aside from 10-20 neocons in the press, the decision to get in has been universally deemed a disaster:

DAVID GREGORY: Former Vice-President Dick Cheney has been quite critical of this president and he wrote an op-ed this week in which he said in part, “Rarely has a U.S. president been so wrong about so much at the expense of so many. Too many times to count, Mr. Obama has told us he is ‘ending’ the wars in Iraq and Afghanistan – as though wishing [makes] it so.” Do you think Dick Cheney is a credible critic of this president?

SEN. RAND PAUL: I think the same questions could be asked of those who supported the Iraq War. You know, were they right in their predictions? Were there weapons of mass destruction there? That’s what the war was sold on. Was democracy easily achievable? Was the war won in 2005, when many of these people said it was won? They didn’t really, I think, understand the civil war that would break out. And what’s going on now -- I don’t blame on President Obama. Has he really got the solution? Maybe there is no solution. But I do blame the Iraq War on the chaos that is in the Middle East. I also blame those who are for the Iraq War for emboldening Iran. These are the same people now who are petrified of what Iran may become, and I understand some of their worry.

Did you see that? Americans view Iraq so toxically that here we find a Republican senator siding with President Obama over a former Republican vice president on points. Paul is far, far from being an Obama apologist, but he at least recognizes the overwhelming political evidence that Bush-Cheney's invasion of Iraq is seen as BAD while Obama's exit from Iraq is seen as GOOD.

The Republican Party may be more malleable to the Cheneys' desired return to hawkishness in the post-Obama era in other areas. But on Iraq? Paul knows that the only points to be scored off of Dick Cheney come from opposing any- and everything he recommends about it.