Gun nuts are terrorizing America: The watershed moment everyone missed

From Cliven Bundy defeating the cops to "open carry" movement's menace, the left's timidity has spawned a nightmare 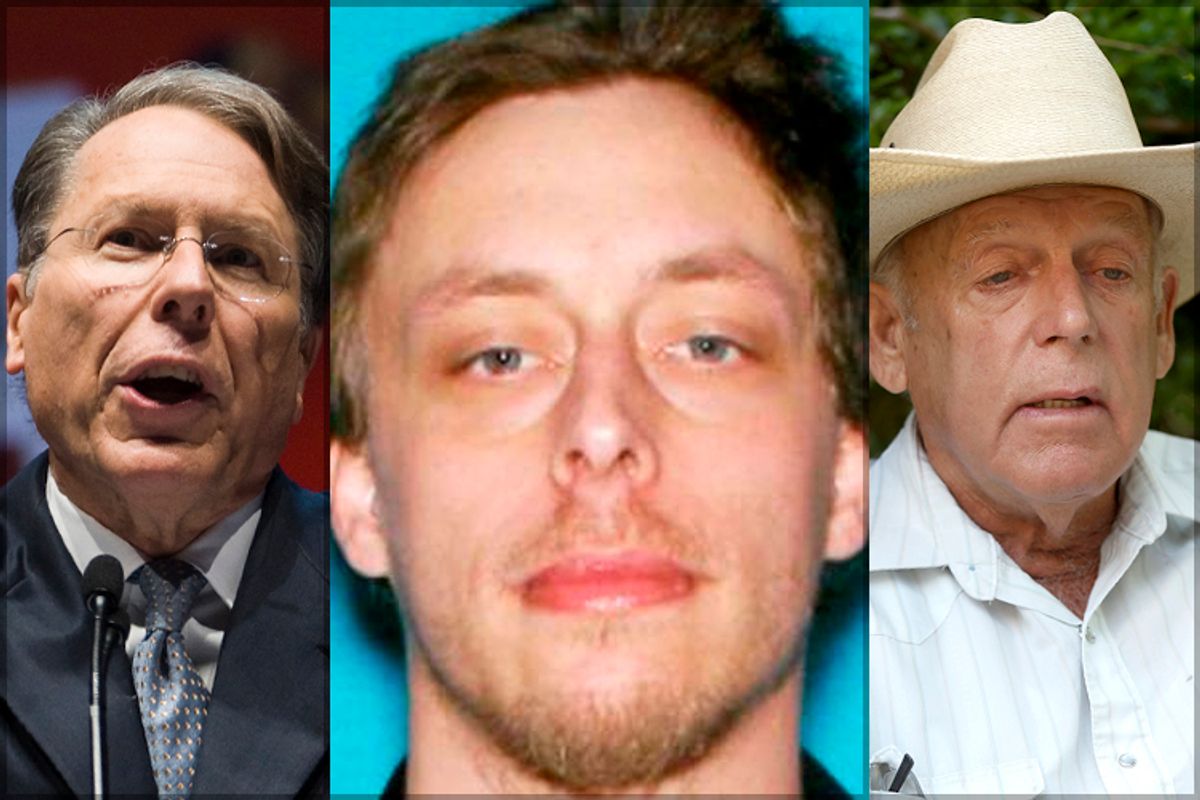 Here is a truth so fundamental that it should be self-evident: When legitimately constituted state authority stands down in the face of armed threats, the very foundation of the republic is in danger. And yet that is exactly what happened at Cliven Bundy’s Nevada ranch this spring: An alleged criminal defeated the cops, because the forces of lawlessness came at them with guns — then Bureau of Land Management officials further surrendered by removing the government markings from their vehicles to prevent violence against them.

What should be judged a watershed in American history instead became a story about one man’s racist rants. Even as two more Nevada lunatics, inspired by their stint at Cliven Bundy’s ranch, allegedly ambushed and mowed down two police officers and killed a bystander after crying, “This is the start of a revolution.” And now, an antigovernment conspiracy theorist named Douglas Cole recently shot at two police officers in Nevada County, California (though you may not have heard about that, because the New York Times hasn’t found the news yet fit to print).

Such actions are the logical conclusion of a movement that has been veritably sweeping the nation for years now. Early Tea Partiers began attending rallies with guns on their hips. “Open carry” advocates make a fetish of just this sort of brandishing of guns in public places, especially where they are most unwanted. The slogan “molon labe” — “come and take them,” the defiant cry allegedly uttered by King Leonidas I when the Persian army ordered the Greeks to surrender their weapons at Thermopylae — is everywhere on the right: molon labe T-shirts, molon labe cloth napkins for your next dinner party, sexy molon labe thongs, molon labe release-catches for your AR-15, available on Etsy.com from “MolonLabeLLC.”

The message implicit in such products was but rendered explicit by the “patriots” Jerad and Amanda Miller, speaking to reporters from Bundy’s spread back in April: “I feel sorry for any federal agents that want to come in here and push us around or something like that. I really don’t want violence toward them, but if they’re going to come bring violence to us, well if that’s the language they want to speak, we’ll learn it.”

It was the logic of some ultra-leftists from the 1960s: the intentional forcing of violent “contradictions” between citizens and the state, the better to spur revolution. It is, at the very least, a handy negotiating position: In Cliven Bundy’s case, it saved him about a million bucks in grazing fees he owes on land owned by taxpayers like you and me. Armed force trumped law. Armed force trumped politics. Which is, of course, for a citizen of a republic, the opposite of patriotism: The more people who believe that — and more and more are believing it every day — the more irrelevant the Constitution these people claim to revere becomes.

Now, as a historian, it has been my project to demonstrate that there is nothing particularly new about the fetishization of anti-constitutional insurgency as Constitution-worship on the right. I’ve written about the Minutemen, the early-'60s crowd of gun nuts who stockpiled weapons for the final showdown against the state they were sure was imminent once the Communists finally took it over, and slapped stickers on the mailboxes of perceived enemies reading, “Traitors, beware! Even now the crosshairs are on the back of your necks.” In 1966 authorities arrested their leaders and confiscated their stockpiles of tons of ammunition, bombs and even rockets. The right’s vision of sidearms as any patriot’s must-have accessory got a boost from the riots and increasing crime rates of the late 1960s. Inside the National Rifle Association, once mostly an anodyne gun-safety organization aimed at sportsmen, a faction emerged to take aim at any and all attempts at gun regulation, many of which they once supported. Laws, for example, aimed at banning the sale of guns by mail — the NRA’s American Rifleman magazine said that followed the “Communist line.” From there it was but a short distance to the conviction that gun-toting was a patriotic imperative — the better to beat back “those,” as Ronald Reagan wrote in Guns & Ammo magazine in 1975, “who see confiscation of weapons as one way of keeping the people under control.”

So what’s different now? Why is this language so prevalent, and why do so many on the far right seem so eager to act upon it? They haven’t changed. We have.

By “us,” I mean Democrats — though the kind of Democrats, to be fair, who decide party policy from Washington. Once upon a time, Democratic presidential candidates robustly argued for gun control — that, as the party platform put it in 1980 (the year the NRA made its first ever presidential endorsement, of Ronald Reagan), “handguns simplify and intensify violent crime”; Democrats support “enactment of federal legislation to strengthen the presently inadequate regulations over the manufacture, assembly, distribution, and possession of handguns.” Note no mention of machine guns, because back then the notion that there should be no barrier to their ownership would have seemed self-evidently ridiculous to most reasonable observers. It’s fascinating to read the series of "Doonesbury" strips from 1979 in which Garry Trudeau's resident madman Uncle Duke, who covered his living room couch in land mines and owned a Soviet-made Makarov mortar for deer-hunting purposes, goes to work lobbying for the NRA. In response to Duke’s clichéd claim that “once you have gun control, the only people left with guns are criminals,” a congressman points out that even that would reduce the carnage, because “as you well know, almost 70% of all murders are committed among family members and over half of them involve handguns!”

Responds Duke: “Exactly! So look at it from the point of view of the victim! What if your wife were attacking you with a handgun?”

Duke’s answer reduces his interlocutor to confused splutters: “Well, wouldn’t you want to be in a position to return the fire?”

In 1979, this sounded so absurd as to be self-evidently satirical. Now, it just sounds like an ordinary day on C-SPAN — with congressmen, not NRA lobbyists, being the ones making the once-absurd “argument.”

In the interim, the mainstream of the Democratic Party simply gave most of the gun control argument away. Al Gore ran on a platform in 2000 that devoted about 250 words to gun control, including a pledge to push for mandatory child safety locks and a full background check and gun safety test before anyone could buy a handgun in America. Then, after Gore lost his home state, Tennessee, and other “border” Southern states, the geniuses running the Democratic Party decided to abandon gun control as an issue in order to court Southern white men (how's that working out?). The gun-control portion of the platform in 2004 was slimmed down to 46 words. 2012’s version gave away the store: It affirmed, “We recognize that the individual right to bear arms is an important part of the American tradition, and we will preserve Americans' Second Amendment right to own and use firearms,” and asked only for “an honest, open national conversation about firearms” (yeah, the NRA is really interested in that), “effective enforcement of existing laws, especially strengthening our background check system,” and reinstating the assault weapon ban and closing the gun show loophole.

In other words, there is virtually no countervailing power to the now-hegemonic acceptance that there’s nothing much to do about the proliferation of guns in America. Democrats, as usual, gave an inch. The right, as usual, took a mile. And now we face the consequences.