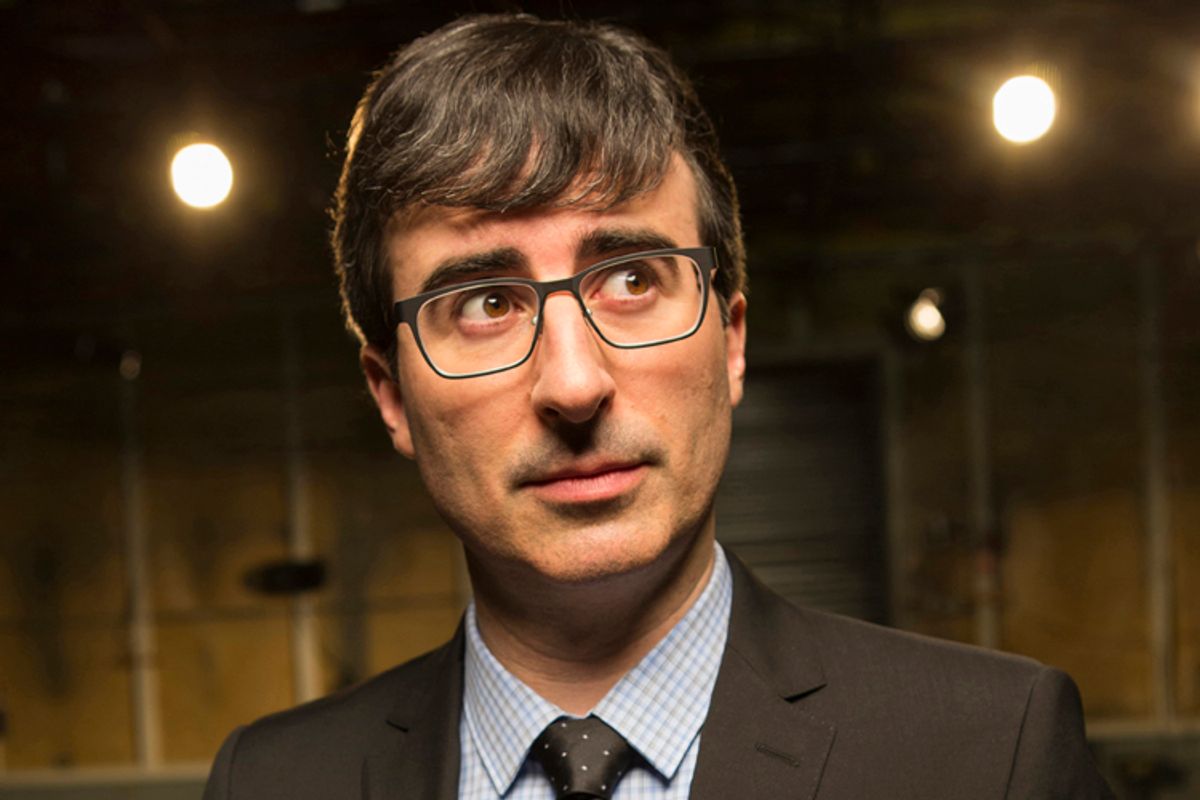 Just ahead of the sixth episode of HBO’s “Last Week Tonight,” comedian John Oliver admitted on “CBS This Morning” that he and his crew are “still trying to work out what this is.” But Oliver seems to know what "Last Week" isn’t: “The Daily Show.”

Oliver, of course, is a seven-year “Daily Show” former correspondent. His executive producer is  former “Daily Show” head writer Tim Carvell. But his new show is drastically different from Stewart's for one main functional reason: it's on HBO. In the run-up to the premiere, Carvell told U.S. News that HBO’s commercial-free format and increased editorial freedom, along with a weekly orientation, would give his show the ability to "hopefully ... step back and take more time to do one or two stories in great depth.”

“For one of our test shows we did a really harsh thing on General Motors and I know that 'The Daily Show' also did cover General Motors," Carvell added. “But it’s nice to, at HBO, feel like there won’t be any phone call you need to deal with; nobody’s having a shitty day because you did a General Motors piece.”

And so this has contributed to a somewhat surprising development: Oliver’s program is at times even angrier than either of its Comedy Central cousins, “The Daily Show” and “The Colbert Report.” And it's certainly more instructive. Stewart and Colbert "are adept at identifying problems but rarely cross over into agitation,” the Guardian wrote recently, paraphrasing Dannagal Young, an assistant professor of communication at the University of Delaware who teaches satire and the psychology of political humor. Oliver is fully engaged with the topics he satirizes; he's not just raising an eyebrow and dismissing them.

Though both Stewart and Colbert are excellent comics who offer cathartic relief from mind-numbing bureaucracy and the 24/7 reactionary news cycle -- and can, when they want to, rally the masses, their jokes are usually in the service of mocking Fox News anchors and rolling their eyes at cartoonish figures like Donald Trump. Rarely, if ever, does their comedy seek to fix the broken systems they so frequently mock. In a 2012 essay for the Baffler, writer Steve Almond described the shortcomings of Stewart and Colbert's style: "What Stewart and Colbert do most nights is convert civic villainy into disposable laughs ... [treating] the ills of modern media and politics as matters of folly, not concerted evil." He identified the core emptiness of their satirical approach: "Rather than targeting the obscene cruelties borne of greed and fostered by apathy, they harp on a rogues’ gallery of hypocrites familiar to anyone with a TiVo or a functioning memory." Stewart and Colbert's goal, he said, is to "mollify people, not incite them." But comedy, at its loftiest, should confront the "moral complacency" of its audience.

Enter John Oliver, who is confronting America’s “moral complacency” much more effectively than either of our two leading cable satirists. On the "Daily Show," he could seem like the goofy, faux-oblivious British lackey peering through the window at American politics. But on his own show, he has demonstrated the potential to convert his audience’s frustration into action, challenging his viewers to answer tough, uncomfortable questions that Colbert and Stewart often sidestep.

Take, for example, the Indian elections. Stewart introduced his segment on India's elections with the "four stereotypes" Americans have of India, and coverage of the elections with correspondent Jason Jones hamming up the "dumb American" act for comic effect. The joke was, again, the media circus and bureaucratic inefficiency, with enough foreign culture as context sprinkled in to allow us to laugh at their dysfunction, not unlike the way we do at Fox. By the end of it, we've learned something about India's election, yes, but the segments don't provoke any deeper thought or challenge our previous assumptions.

But Oliver, rather than playing to the ignorant American, chastised the ignorant American -- and made a case for why he or she should pay attention. "If polls are to be believed, we may be throwing state dinners for this guy in the near future," he said of new Prime Minister Narendra Modi. After he made his case, he concluded, "If this story isn't worth covering, then nothing is worth covering. And I don't mean to suggest that the American news media have completely ignored India this week, it's just that this is the story that they went with [clip of news covering a leopard on the loose]."  In the end, it was a powerful segment that forced viewers to think through their own relationship to world events. For Stewart and Colbert, the media itself is the joke. But Oliver uses media criticism as a framing device to help viewers understand far bigger issues.

The following week, Oliver took on the death penalty, and made a plea to his audience to do the tough work of forming a concrete opinion. Starting from an unbiased, uninformed perspective, he built a comprehensive argument against the law with logic and humor. He concluded:

“The death penalty is expensive, potentially kills innocent people, and doesn’t deter crime. And here is where it gets hard — harder than is potentially appropriate for a comedy show late on a Sunday night: but if we are going to answer difficult and profound questions, as the president told us to, the toughest one is probably, ‘if someone is guilty of committing a horrible crime, and the family of the victim want the perpetrator executed, do we want to live in the kind of country that gives that to them?’ I would say, ‘No.’ You, might very reasonably say, ‘Yes,’ or at the very least, ‘uughhhhmmm...But it is a question that is going to need an answer.”

Contrast that with Colbert, who in April tackled the related subject of Tennessee’s slimy new death penalty law: Colbert assumed the audience agreed that the death penalty is “unusually cruel,” and mocked the government for its dodgy behavior. Even for someone who doesn’t have an opinion about the death penalty, it would be easy to laugh at Colbert’s segment and still get the joke: the government-- a target that’s always ripe for mockery. In Oliver’s segment about a botched execution, though, the joke is that Americans -- including you, the audience -- are still attempting to justify the death penalty. It may not be as side-splitting as Colbert, but it’s far more compelling.

In a later episode, Oliver converted his own anger and frustration into action. In a segment about net neutrality -- a debate that, though urgent, has been heated for months -- Oliver managed to get his audience to do something about it. “This is the moment you were made for, commenters,” Oliver said, urging “Internet trolls” to complain to the FCC about its plan to regulate the Internet. “We need you to get out there, and for once in your lives, focus your indiscriminate rage in a useful direction!” he exclaimed after making a 13-minute case against the FCC's proposal. A day later, the FCC crashed, and it's likely that Oliver’s segment was a major contributor, if not the cause. Oliver told CBS of the incident, “We merely pointed people to their website and told them why they should be angry about it, and they went in droves.”

Oliver may not have figured out his show's exact format yet, but week after week, he continues to raise “tough questions,” as his show has advertised, and often skewers his audience in the process. Whereas Stewart and Colbert take pains to seem like our friends, Oliver has made it clear, as he recently told NPR's Terry Gross, that he is "no one's friend." So if “HBO is the moral wild west,” as Oliver said on CBS, then the host has successfully assumed the position of lone sheriff. As the show continues to evolve, we’ll see how far he will go to enforce the law, however unpopular it may be.