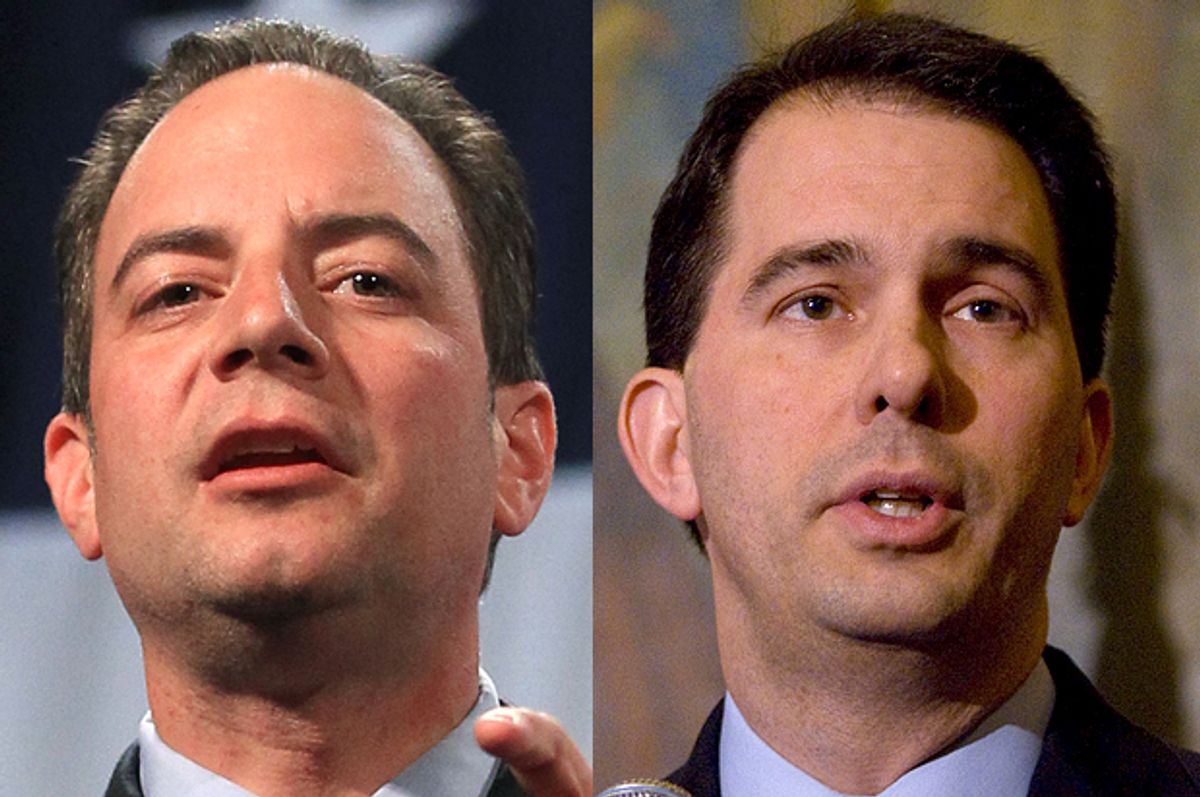 It’s always seemed strange that Wisconsin Republicans like Reince Priebus and Scott Walker would insult their own state by claiming that it has a problem with voter fraud and needs tougher laws to prevent it. Wisconsin has traditionally been known for an uncommonly clean political culture (until recently, anyway), and I’ve never quite understood why conservatives would want to impugn it.

Can you say "projection"?

Now we learn about the curious case of Robert Monroe, a 50-year-old health executive who is accused of voting a dozen times in 2011 and 2012, including seven times in the recalls of Scott Walker and his GOP ally Alberta Darling. Wisconsin officials say it’s the worst case of multiple voting in memory.

Oh, and, did I mention he's a Republican?

Monroe got my attention because he’s from the Milwaukee suburb of Shorewood, where I went to high school. Television coverage of the case focused on Shorewood’s quaint Village Hall, where I registered to vote at 18, and where Monroe allegedly filled out an absentee ballot for his son, who voted in person a few towns away, which helped trigger the investigation. Monroe lives six blocks away from where I grew up.

Investigators say Monroe voted twice for Alberta Darling in her 2011 recall, and five times for Walker in the June 2012 recall. He’s used his own name, his son’s name and his girlfriend’s son’s name. (They can’t be sure exactly whom he voted for in each case, but he gave money to Darling and Walker.) Then in the November presidential election, he voted first in Shorewood, then again in Lebanon, Indiana, where he also owns a home. He claims he had temporary amnesia and doesn’t remember any of the Election Day events.

Right before the 2012 recall, you may remember, Reince Priebus claimed that Democratic voter fraud could account for up to 2 percent of the vote on Election Day. "I'm always concerned about voter fraud, you know, being from Kenosha, and quite frankly having lived through seeing some of it happen," Priebus told reporters. "Certainly in Milwaukee we have seen some of it, and I think it's been documented. Any notion that's not the case, it certainly is in Wisconsin. I'm always concerned about it, which is why I think we need to do a point or two better than where we think we need to be, to overcome it."

Walker wouldn’t go as far as Priebus, but endorsed his view that voter fraud was a problem in his state. "We have seen problems in the past in Wisconsin," Walker said. "I don't know what percentage to predict on that. I hope it's none. I hope there is none. But certainly we're cautious, and we want to make sure there are enough volunteers out there."

Even at the time, voting rights advocates pushed back. If 1 to 2 percent of the vote in Wisconsin’s 2010 gubernatorial election were fraudulent, that would amount to 21,000 to 42,000 votes, or six to 12 fraudulent votes in the state’s 3,630 precincts, the Milwaukee Journal-Sentinel found. A 2008 bipartisan voter fraud investigation resulted in 20 prosecutions, mainly of felons who tried to vote after being disenfranchised. "They have zero, zero evidence to substantiate it," said voting rights attorney Richard Saks. "It's simply demagoguery to whip up fear."

Or maybe it’s projection, since the most notorious case of voter fraud turns out to be a Republican. "During 2011 and 2012, the defendant, Robert Monroe, became especially focused upon political issues and causes, including especially the recall elections," the complaint against him alleges. And Republicans became especially focused on fighting voter fraud as well as cutting back on early voting, primarily used by low-income Democratic voters in Milwaukee.

The only evidence even relating to voter impersonation that the defendants introduced was the testimony of Bruce Landgraf, an Assistant District Attorney in Milwaukee County. Landgraf testified that in “major elections,” by which he means gubernatorial and presidential elections, his office is asked to investigate about 10 or 12 cases in which a voter arrives at the polls and is told by the poll worker that he or she has already cast a ballot.

However, his office determined that the vast majority of these cases—approximately 10 each election—have innocent explanations, such as a poll worker’s placing an indication that a person has voted next to the wrong name in the poll book.

Of course, Adelman didn’t know about Robert Monroe. Unbelievably – or not – Wisconsin conservatives are saying the Walker supporter’s crime is “the Democrats’ fault,” because Democrats opposed the voter ID law. I suppose it’s just a matter of time until we hear that from Reince Priebus, too.