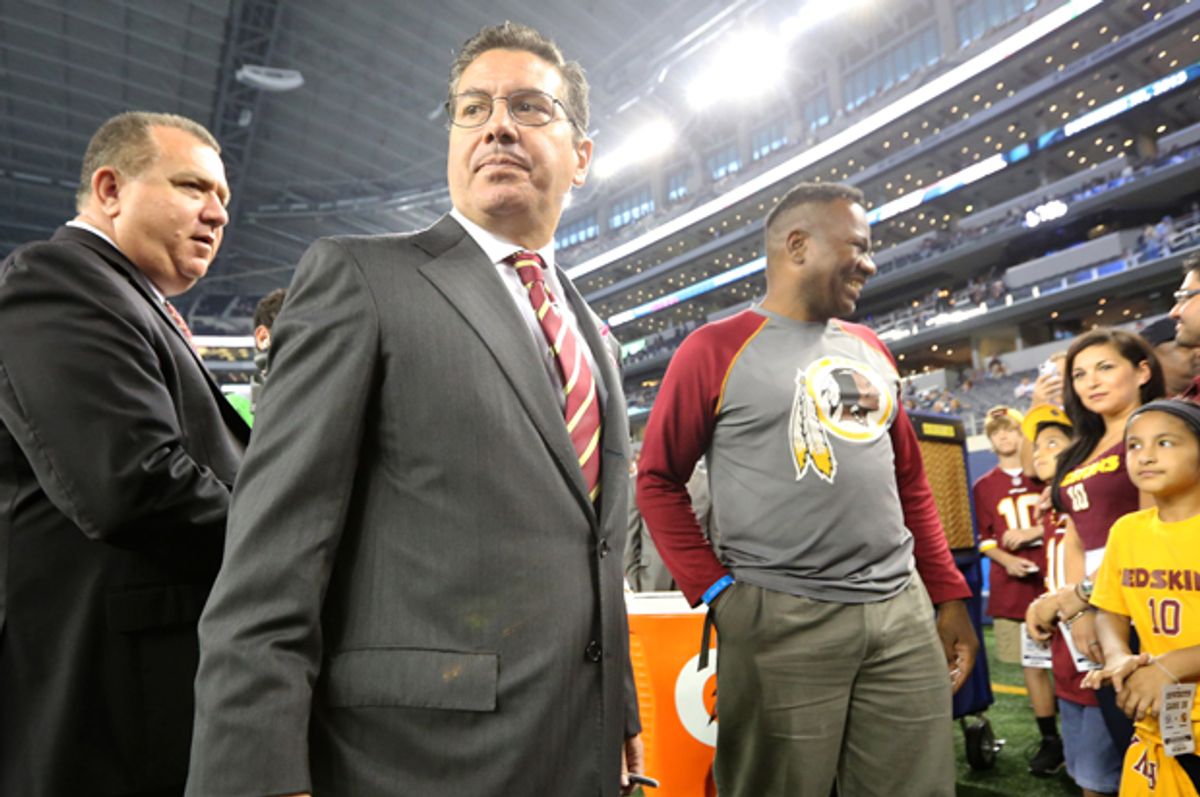 Czaban: The only good counter argument is to say as soon as the Kansas City Chiefs and the Cleveland Indians and the Florida State Seminoles all want to do this then we’d certainly listen to them if they want us to join their movement to change their names….[Otherwise] say we’ll be the Washington Chiefs and paint a more racist picture on the side of the helmets, a buck-toothed Native American that says Chiefs. It won’t say Redskins, but it’ll be a really ugly Native American. It will not be a proud, dignified Native American. It’ll be very cartoonish, like Chief Wahoo, with a big buck-toothed smile.

Cooley: Chiefs and spell it wrong. Put the [e before the i]... No, I think if, God forbid, they were forced to change the name, they should just change it to the Smurfs. Something just out there. And then make the Smurf a little Indian Smurf, a red Smurf.

Yes, more racism is this ESPN crew's reaction to the successful trademark challenge by Native American plaintiffs against Washington's team name -- an ethnic slur referring to the bloody scalps of Native American men, women and children that the U.S. government once paid bounties for.

This ruling has been a long time coming. The Native American community has been calling upon the team to change its name since the civil rights era, led by  longtime Muscogee Creek activist Suzan Harjo of the Morning Star Institute, who filed the first suit in 1992  -- which was overturned on a technicality in 1999 -- and organized the second one, decided on Wednesday. Additionally, the National Congress of American Indians, the oldest and largest national organization of American Indian and Alaska Native tribal governments, has been in long-standing opposition to the use of “Indian” stereotypes such as mascots, logos and symbols. In 1968, the NCAI established an organizational campaign to bring about the end of these harmful and archaic depictions of Native people. In recent years, individual tribes, like the Oneida Indian Nation, have been using their new wealth to press the issue harder. And support has been growing. Last month, the Navajo Nation, the largest tribe in population and land base in the United States (they are not represented by NCAI) joined the movement with a resolution demanding the Washington, D.C., NFL franchise change its name.

[They're] going to dance around like in the final scene of Star Wars, like they just defeated the evil empire. Go ahead dance around and do whatever it does that assuages your white liberal guilt but nothing has changed, nothing will change. This is the biggest nothingburger story ever ... Maybe we can get therapy for [them], chip in, get to the core of their guilt and understand what is it that’s nagging you.

Well, we didn’t dance around like Ewoks, but myself and other Native people from across the country celebrated together via social media at a Facebook Event page called, appropriately enough, “Redsk*ns Trademark Cancellation Day.” And it didn’t “assuage our white liberal guilt” but it did mark an important step for Native people fighting against defamation and stereotypes and toward obtaining protections under the law that other ethnic groups in the U.S. have enjoyed for decades and that we are only starting to realize now 50 years after the March on Washington.

I had to laugh as Cooley and company wondered aloud why this is an issue, and the only reason they could come up with was that it's an attack on the team’s improved performance. It's obvious that, insulated in their conservative world of professional football, they have been completely blindsided by the social media organizing of Native people and our allies in organizations like Eradicating Offensive Native Mascotry, which I helped found, and which now has more than 900 members from across the United States and Canada representing tribal members from hundreds of tribes and communities both urban and reservation.

For decades we have lagged behind other groups in getting recognition for our concerns, because we are only 1 percent of the population — a staggeringly low figure that is itself a legacy of U.S. policies designed to remove us as a threat to expansion into our lands. I know from arguing with the team's supporters online that virtually none of them have ever even met a Native American person. Railing against me and other Natives is often the first time they’ve had a conversation with an actual citizen of a remaining Native nation.

What I find the most amazing when talking to supporters of the team name is the complete absence of knowledge about the Native community that they speak from, yet they nonetheless feel emboldened to speak for us, insisting, for example, that we don't find the name offensive.

This all falls in line with studies showing that the use of Native mascots actually inflates the self-esteem of non-Natives, while having the opposite effect on Native people themselves. In a 2008 research paper, Stephanie Fryberg, a cultural and social psychology scholar and an enrolled member of the Tulalip Tribe, reported that exposure to mascot images like Chief Wahoo decreased Native youth self-esteem even more than that of stereotypically negative images (such as those depicting alcoholism and homelessness). These results even held true for Native people who claimed to find Native mascots positive.

These contrasting responses to Native mascots may serve as a clue as to why they are so difficult for fans to let go of, and why Native people, even when polled, may be unaware of the damage they do to their communities. The results also speak to a normative level of isolation Native people experience from American culture every day, both on and off the reservation. We have become acclimated to this and it comes at a heavy price. Native suicide rates are at 18 percent — twice as high as the nearest ethnic group.

In their ability to inflate non-Native self-esteem while doing great damage to those directly represented by them, Native mascots constitute another taking by the United States from our people. The phenomenon gives life to the term "Redsk*ns" as a present-day form of bounty on another generation of the indigenous population. As a mascot it lives up to its historic meaning as a war trophy.

And yet, Cooley and company claimed during their show that 70-to-90 percent of Native people are proud to call themselves "Redsk*ns." They appeared not to have heard of the most recent study done by California State University, San Bernadino, that found 67 percent of Native Americans found the Washington team name offensive. (By contrast, only 20 percent disagreed and 12 percent were neutral, while a full 60 percent of white respondents said they did not find the term racist.) The constant reiteration by Cooley and other Washington supporters -- that Native Americans don’t care -- shows an extreme ignorance about Native people.

My organization, Eradicating Offensive Native Mascotry, has its origins on Twitter, where we met after arguing together with Washington fans. About 120 of us began meeting on Facebook during the football season to file FCC obscenity complaints online every time the word was used during Washington games. (I have, in my time, filed many FCC forms reporting the usage of the ethnic slur by the ESPN 980 announcers, in particular. My hope is that with this trademark decision that I will never have to file another one.) About 450 of us trended #NotYourMascot during the Super Bowl, and we will continue our hashtag activism as a way of creating that environment where the use of a slur for an NFL team in the nation's capital will become more and more unacceptable. We will also apply public pressure on sponsors to distance themselves from a slur that has been denied a federal trademark.

Our group has grown to more than 900 members from across the country, and from nearly every tribe in the United States. We are Native American parents, professors, lawyers, journalists, teachers, small business owners, artists, elders and tribal leaders. Our organization is completely volunteer and yet the depth of the talent in our group means there is never any limitation to what we can do. This is the real Native America that our fellow Americans need to know about. Yes, we are just 1 percent of the population; yes, 30 percent of us live on sometimes remote reservations, and 70 percent are dispersed in urban communities where we exist as minorities among minorities. But we still have the right to basic human decency and respect.